“The world needs a wake up call…we’re gonna phone it in.” – Gilbert

John Carpenter’s 1988 sci-fi/thriller THEY LIVE is a perfect movie to watch in our current social-political climate. The story involves a race of diabolical aliens disguised as humans trying to destroy the world by getting people to follow the rules, deplete all their energy and not question authority. Sounds familiar.

The late great Roddy Piper stars as Nada, a drifter who has just arrived in Los Angeles. Watch the opening sequence with the train, its recalls a scene in a Sergio Leone film we love Once Upon a Time in The West.

Nada is in need of a job, so he hits the city’s unemployment office but nothing is available. While aimlessly walking around, he spots a construction site and is able to pick up some menial work. Nada is an affable, calm guy, the exact opposite of someone like Frank Armitage (The Thing‘s Keith David), a fellow employee. From the moment they meet these guys are butting heads. It’s clear that Frank has issues with everything including the system which is set up to keep people like him down. Nada, on the other hand “believes in America”. His wake up call will be coming soon.

With no place to live, Nada follows Frank to an outdoor homeless shelter. The people are friendly, but the more time Nada spends there, things seems amiss. A pirate TV station broadcasts nightly with a strange man ranting about those in power. Helicopters fly overhead more frequently than they should. Nada becomes curious when he notices a shantytown worker named Gilbert (Peter Jason) entering a nearby church so he follows him. Nada discovers that the place is actually a front for a group of activists talking about something in secret. On his way out, he is startled by a weird old preacher (Raymond St Jacques) who seems disturbed. Nada also finds a box full of sunglasses which he steals and stashes in an alley. For the heck of it, he puts a pair on and this is where everything he believed about America changes for him. The glasses reveal subliminal messages hidden on billboards and signs everywhere in the city. They say things like OBEY, CONSUME, CONFORM, BUY. He then sees that there are alien beings disguised as humans. Nada’s vocal reactions to the ghoulish looking aliens is hilarious. When the police become alerted that he’s aware of what’s going on, they confront him but he’s able to get away. He enters a bank and this is where we get the film’s most well known one liner: “I have come here to kick ass and chew bubblegum, and I’m all out of bubblegum”. Nada shotguns as many of the creatures as he can before making his getaway.

With the aliens now out to get him, Nada needs to find somewhere to hide, so he kidnaps a businesswoman named Holly (Meg Foster) and has her take him to her house in the Hollywood Hills. Nada begins suffering a headache due to wearing the sunglasses. Suddenly, Holly catches him off guard, knocking him through a large window. Nada is hurt from the high fall but manages to get back to the alley where he stashed the glasses. When Frank arrives with his paycheck Nada tries to clue him into what’s happening but is only met with the usual anger and swearing. A knockdown, drag out street brawl begins when Nada orders Frank to “put on the glasses!”. This one of the best fistfights in film history and goes on for around 5 minutes. They beat each other to a pulp with sucker punches and body slams. It’s both comical and brutal to watch.

Once Frank realizes that Nada isnt lying to him, the two rent a hotel room to discuss their next move. One of the church group members, Gilbert arrives and tells them about a meeting with the other resistance fighters. The group then begin implementing their attack on the aliens who have been collaborating with certain humans to take over and deplete Earth’s resources, before they move onto the next sorry planet. Nada, Frank and the others won’t go quietly without a fight, and they are ready for it.

They Live remains one of John Carpenter’s best films which shines a bright unflattering light on the media’s influence, mass consumerism and political corruption we faced in 1980s and still do today. He used the sci fi/thriller genre in the same the way that the 50’s genre directors did to address the atomic age. The result was immensely entertaining, extremely smart and timeless. This is John Carpenter giving the finger to the establishment in the way only he can. We highly recommend this Furious Cinema Classic.

BUY THEY LIVE ON BLURAY 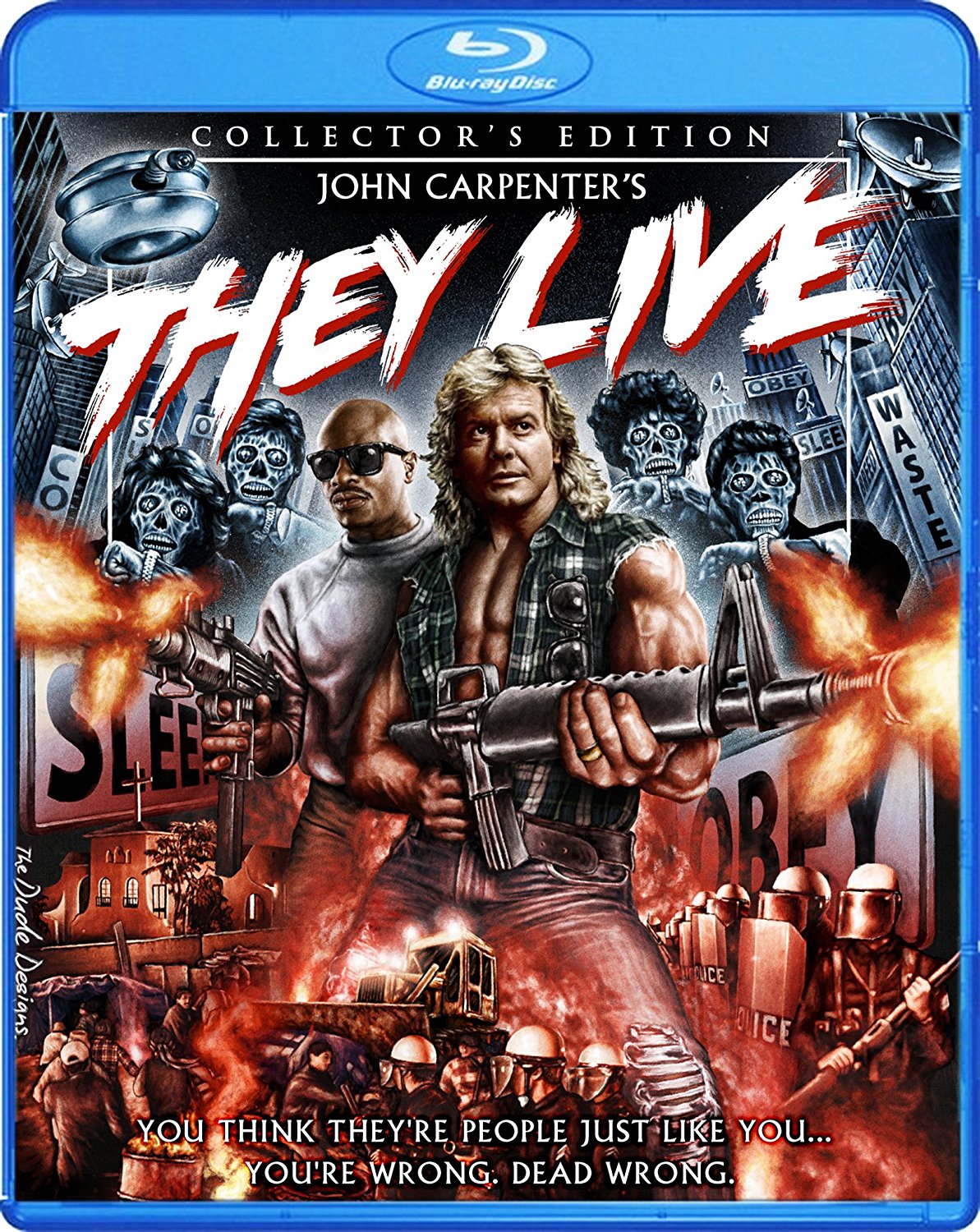