Chew bubblegum and kick ass with THEY LIVE

“Rowdy” Roddy Piper stars as Nada, a mysterious drifter who arrives one day in Los Angeles looking to start a new life. He soon gets a job working construction and finds a place to stay thanks to the help of Frank Armitage (Keith David) one of the crew that spots him hanging around. Nada is an easy going fella who enjoys the simple things in life like a good meal or playing his harmonica. When he accidentally stumbles upon a pair of strange sunglasses he discovers that he can see many of the regular shmoes on the street are really creepy skullheaded aliens. Nada also learns that these disguised invaders are secretly controlling society through subliminal messages placed in advertising and other media. His ‘live and let live’ mentality soon turns to paranoia and aggression and he begins to question everything and everyone around him. Luckily, Nada joins up with a group of likeminded resistance fighters who are intent on spreading the news and keeping the aliens from completely taking over the Earth.

Director John Carpenter (Halloween, Escape From New York, Christine) delivers a very funny science fiction/action/thriller hybrid that is, underneath the genre story, a commentary on our own mindless culture. It’s alot like Dawn of the Dead and its themes of consumerism hidden within the zombie plot. They Live is my favorite Roddy Piper performance and it’s very cool that he’s right in the same lineage as older Carpenter rebels like Napolean Wilson (Assault on Precinct 13) and Snake Plissken (Escape From New York).

The folks at the new horror themed DVD label Scream Factory (a sub-division of Shout Factory) have got a beautiful new hi-def edition for longtime fans to indulge in and enjoy on the way this November. We highly recommend picking it up!

The truth is more than meets the eye. You’ve been listening to their speeches and watching them on TV. They influence our decisions without us knowing it. Think again and the choice is yours! On November 6, 2012, SCREAM FACTORY™ presents John Carpenter’s politically-charged science fiction thriller THEY LIVE Collector’s Edition Blu-ray and DVD. Featuring anamorphic widescreen presentation of this cult classic movie, this special collector’s edition home entertainment release of THEY LIVE boasts a bounty of special bonus content, a collectible cover featuring newly rendered retro-style artwork, a reversible wrap with original theatrical key art and much more! THEY LIVE Collector’s Edition Blu-ray has a suggested retail price of $29.93 and $16.50 for the DVD.

Production now underway for extensive and insightful bonus features that include all-new interviews, an audio commentary and archival material. Shout! Factory will announce in-depth bonus features and additional news in next couple months.

Avid John Carpenter fans, movie enthusiasts and collectors please take note: Order this collector’s edition Blu-ray or DVD directly from ShoutFactory.com and receive an exclusive 18”x24” poster featuring the newly commissioned artwork! Less than 500 have been made, so these are only available while supplies last.

Horror master John Carpenter (Halloween, The Thing) directs this heart-pounding thriller in which aliens are systematically gaining control of the Earth by masquerading as humans and lulling the public into submission. Humanity’s last chance lies with a lone drifter who stumbles upon a harrowing discovery — a unique pair of sunglasses that reveals the terrifying and deadly truth. 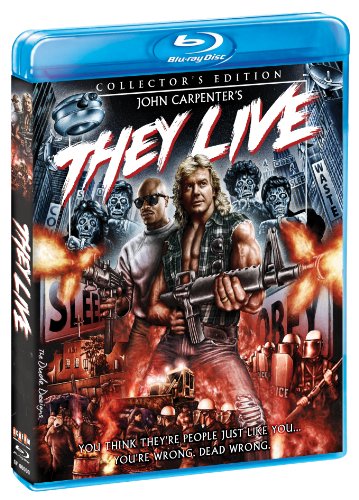