“This thing doesn’t want to show itself, it wants to hide inside an imitation. It’ll fight if it has to, but it’s vulnerable out in the open. If it takes us over then it has no more enemies, nobody left to kill it…then its won.” – R.J. MacReady

In Howard Hawks & Christian Nyby‘s sci-fi-horror film The Thing From Another World (1951) the titular Frankenstein-esque monster is a plant  creature that spreads terror inside an Arctic research outpost. While this version of the story based on the novella “Who Goes There?” by John W. Campbell is considered a classic B-movie, John Carpenter’s 1982 remake is actually more true to the source material. It also takes that story to a completely different level, evolving it into something more psychologically mindblowing and resonant in the cinematic sense. It’s amazing that The Thing was actually panned upon it’s release. Today it is considered a benchmark masterpiece of the respective sci-fi and horror film genres.

A Norwegian helicopter flies through the Antarctica sky as a lone husky dog runs through the snow below. One of the men in the ‘copter begins taking rifle aim and open fires on the dog…but misses every shot. After dodging several bullets as it makes its way across the frozen wasteland, the dog reaches a science outpost where the inhabitants are completely unaware of what’s coming. Inside his “shack”, R.J. MacReady (Kurt Russell) plays a computer chess game (the voice is actually Carpenter’s then wife Adrienne Barbeau who co-starred with Russell in Escape from New York a year earlier). The computer wins and in drunk defiance MacReady curses the machine and dumps his J & B scotch into the console destroying it. This introduction lets us know who MacReady is right away: namely the no shit taking rebel of the movie.

The Norwegians land the ‘copter and begin to angrily pursue the dog around the outposts perimeter, carrying on and screaming in their native tongue. One of the Norwegians accidentally sets off a grenade in his panicked state and it explodes, killing him and destroying the helicopter. The outpost inhabitants watch the scene unfold in shock, but are unable to understand what the Norwegian is saying. He seems psychotic as he tries to kill the dog. As the Norwegian recklessly fires off his gun, Bennings (Peter Maloney) is accidentally grazed. In self defense, the soldier is killed by Garry (Donald Moffat) with a blunt shot to the head. The men put out the blazing remnants of the copter and Clark (Richard Masur) pats the poor dog to calm him.

MacReady and Doc Copper (Richard Dysart) decide to travel to the Norwegian outpost to investigate what the whole situation is really about. Upon arrival they find the remnants of a massive fight and a frozen body which appears to be the victim of some kind of violent attack. They continue looking around and discover a large block of ice with its center carved out and finally come across burnt remains of something that looks like a melted human body. They fly back to the station and one of the science researchers Blair (Wilford Brimley) is ordered to perform an autopsy to find out more. Blair extrudes several regular human organs but the bizarre twisted outer structure still lets him know something inhuman is responsible.

After causing a minor disturbance in the rec room, the dog is placed inside a kennel with some others. It reluctantly enters and slowly lays down in the center of the pack. Disturbed by the new dog’s presence the other animals begin to snap and bark. The Malamute begins to violently shiver like hell is ready to erupt from his body…which it does. The dog proceeds to tear itself apart like some kind of furious fruit and casts out several tentacles to the other dogs as it begins its transformation into a horrific hybrid hound. When Clark hears the shrieking dogs he returns to the cage where he views the unbelievable mutation taking place. He quickly locks up the cage and Mac and the others arrive. Mac yells to Childs to get the flamethrower and Childs quickly ignites the thing into a furious ball of fire.

Blair explains to the men that what they witnessed was a parasitic lifeform that survives by imitating other beings. The group then decide to watch the video footage they retrieved from the Norwegian outpost to get more clues. This recording shows the main area where they had found something buried in the ice and how they set off explosives so they could dig it up more easily. Mac & Co. fly to the spot where they discover something miraculous: a spaceship. They return to the station with some metal shards from the craft and along with the others, try to rationally put together where it originated from. Being highly cynical Americans they have a tough time believing that aliens are responsible but after Fuchs finds Blair’s personal notes with his thoughts on what they’re dealing with it convinces MacReady that their problem is in fact something otherworldly and very dangerous. Soon the men find themselves under a furious attack by the Thing as it tries to take over their bodies one by one leaving them all scrambling in a paranoid frenzy as they try to keep their wits so they can stop it for good.

In a moment of calm clarity, Garry comes up with a sure fire way to narrow down the odds to find out which man (or men) is the host of the deadly alien organism. What follows is one of the films most memorable and suspenseful sequences that rivals anything by someone like Hitchcock. Each man who is under suspicion of being The Thing is strapped to a chair, their blood is then drawn and placed in separate containers. MacReady’s theory being that whoever is The Thing will react in self defense to its host’s body being attacked. To heighten the effect even more MacReady uses a piece of copper wire which he heats up with the blowtorch then touches it to each bit of blood to see what happens. The way Carpenter builds up the extreme tension through editing and sound is just pure genius.

SFX Artist Rob Bottin was responsible for the majority of the amazing and truly imaginative gory effects in the film while Stan Winston created the standalone dog thing mutation. Unlike modern movies that are usually CGI, these effects were done in camera using stop motion which made them even more believable. Rubber gives the visual sense of the thing stretching the bodies out violently turning a human being into a piece of silly putty. It’s both visually sickening and completely cool to see. One of the film’s FX highlights is when the thing transforms a torn off human head into a spider-like creepy crawler to elude the science crew.

In a change of pace, John Carpenter who had created the music for his previous films chose not to score this film instead hiring the legendary composer of the many spaghetti westerns he loved: Ennio Morricone. The main theme (which sounds completely like Carpenter’s style) tonally sets the dark, ominous mood for the film with it’s steady heartbeat-like rhythm.

This review is dedicated to the memory of James Arness: the original Thing (1923-2011)

Buy The Thing on BluRay 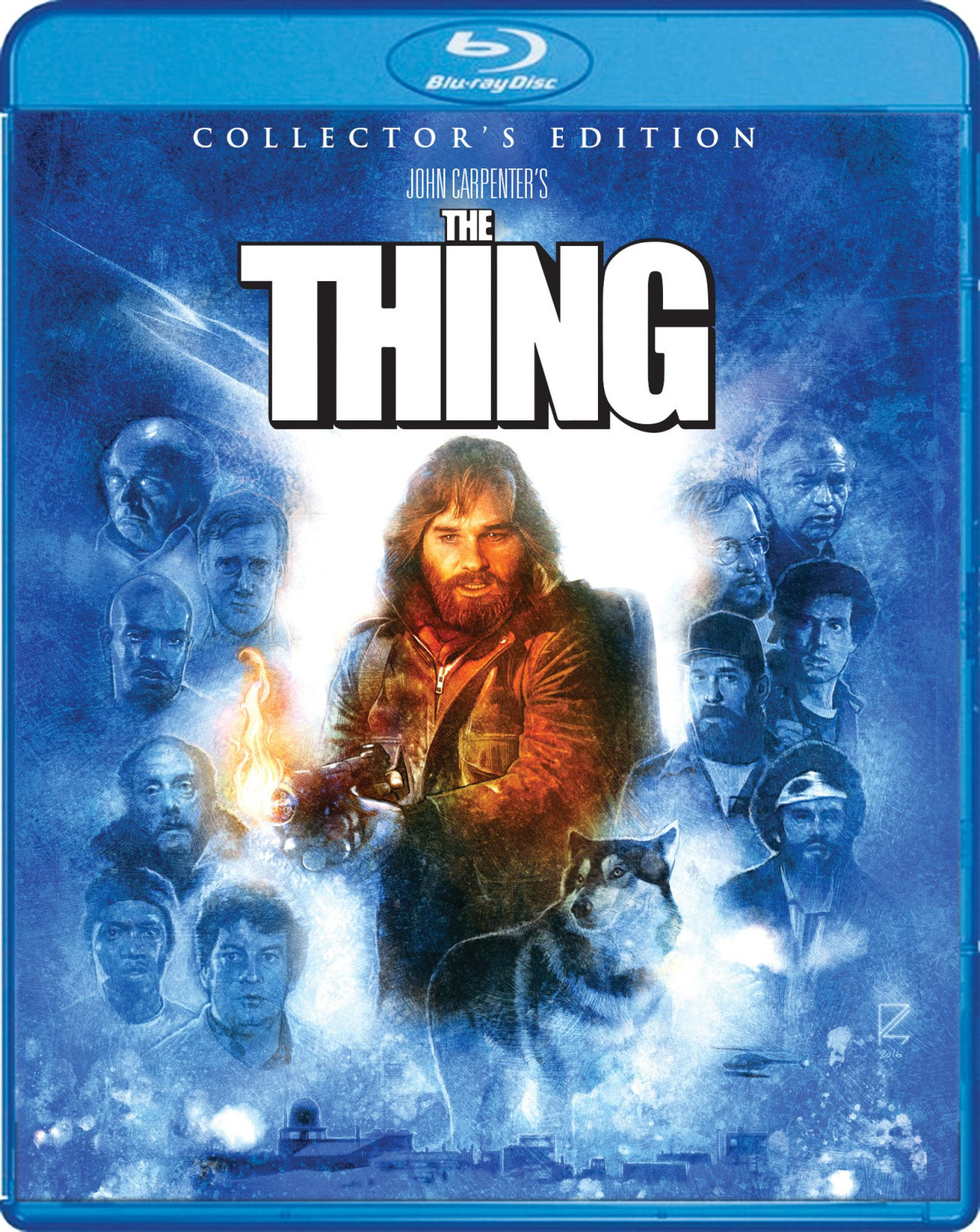