Steve Martin in THE JERK

I was born a poor black child…”

After being a stand up comedy sensation in the late 70s, Steve Martin decided to take his funny ideas into a new arena: film. In 1979, Steve Martin’s debut “The Jerk” was released and it was a smash hit, opening the doors of Hollywood to a whole new brand of comedy. The Jerk’s storyline wasn’t necessarily brilliant, but the talent of Steve Martin and his take on the character he plays is just classic in all the best senses. 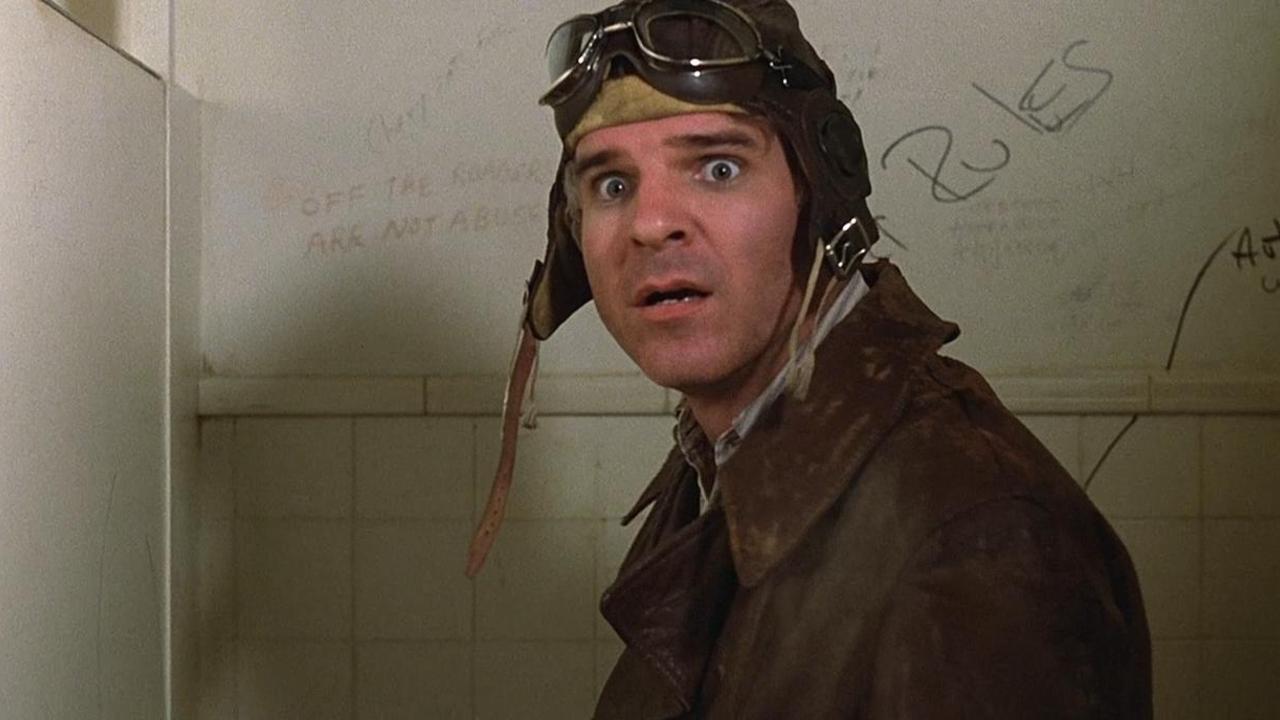 At the opening of the film, we meet a bum named Navin Johnson (Steve Martin). His life used to be different, he was rich once and he had a beautiful wife as well, but one day that all changed. We get to know Navin when he tells his tragic story….

Navin is a Southern boy who lives with his adopted family (who are black). They are very close and they love each other a lot. Navin has just had a birthday and he seems to be realizing that he needs to leave home and go out into the real world to find himself. Steve Martin gives Navin a lovable quality that really gives a character that might’ve been two dimensional, a real depth.

When Navin finally makes it to where he’s headed (California), he finds a hotel to stay at and one night, a dog runs up to his door and begins to bark. Navin asks the dog if there’s a fire, and the dog barks there is. So Navin runs all over the hotel and tells everyone to come out of their rooms. When they all realize it was a false alarm, an old Asian man walks over and tells Navin he should call the dog “Shithead”. 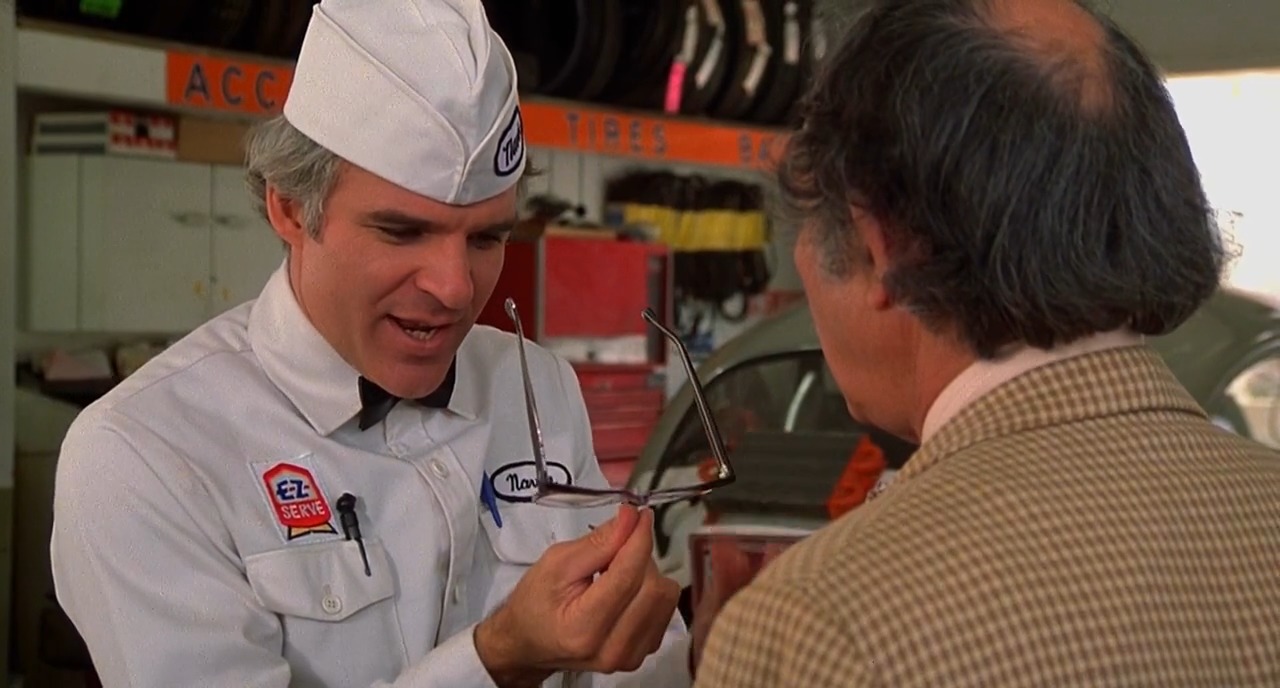 Navin gets a job at a gas station that is owned by Harry Hartounian (comic legend Jackie Mason). Navin has no place to stay so Harry gives him a little room behind the gas station bathroom. Navin doesn’t realize this, so he explains to Harry how he’s going to makeover the bathroom into a nice spot to live in.

While at the gas station, a car full of Mexican hustlers try to rip the place off, but Navin gets the best of them and hooks a rope onto the back of their low rider. The only problem is, the other end is attached to a church. When they try to leave, the side of the church gets ripped right off the building. Watch for the scene when Navin explains that the Mexicans have “won an oven mitt”.

A madman (M. Emmett Walsh) goes on a rampage and shoots at Navin, but misses him, instead shooting all the oil cans outside the gas station. Navin screams “these cans are springing leaks!” then when he realizes the man is shooting the cans he yells “He hates these cans! Get away from the cans!”. 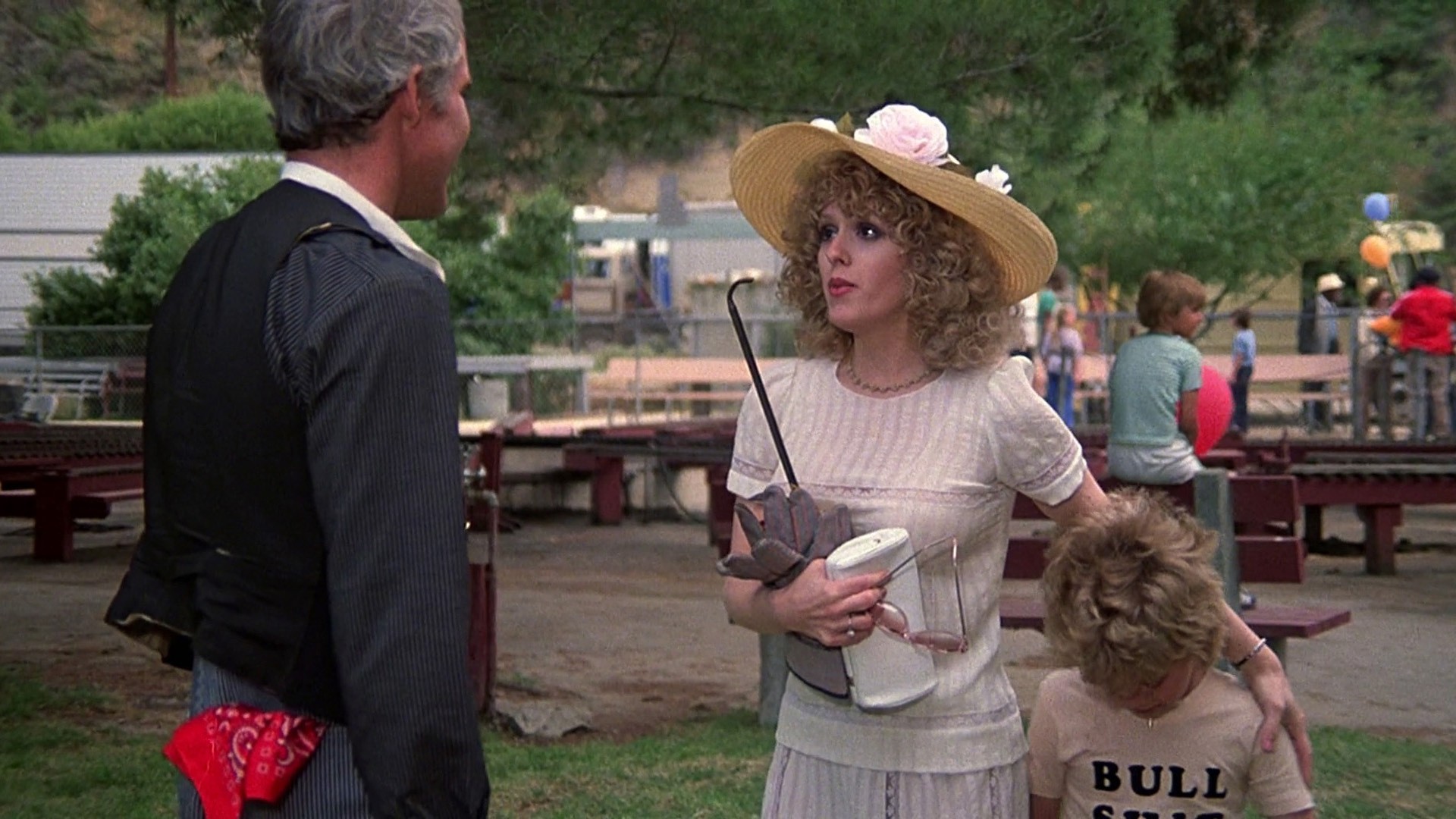 A customer (Bill Macy) shows up at the gas station one day and Navin changes his oil, but the man’s glasses keep falling off. Navin fixes the glasses by putting a special custom holder which keeps them from slipping off his face. The customer is so happy, he tells Navin, he may market this idea and if he does, he will split with Navin: 50/50. Navin agrees and the man takes off.

After leaving the gas station for bigger and better things, Navin gets a job in a traveling circus. This is where he meets Patty (Catlin Adams). A tough stunt bike riding chick who takes a real liking to him (the scene where Navin is roughly seduced by Patty is really hilarious). Navin sends a letter home to his family and explains that he has finally found his “special purpose” and that his new girlfriend Patty has promised him a blow job.

Navin meets a young woman (Bernadette Peters) while operating the kid’s train ride. Her name is Marie and it’s love at first sight. Unlike Patty, Marie is very sweet, soft and feminine. Navin tries to ask her for a date, but it comes out all garbled. They later do have date and Navin introduces Marie to the best snack in the world “Pizza In a Cup”. Suddenly, Patty shows up and is gonna kick Navin’s ass for cheating on her. Marie sticks up for Navin and knocks Patty out. Navin can see Marie really likes him from this action. 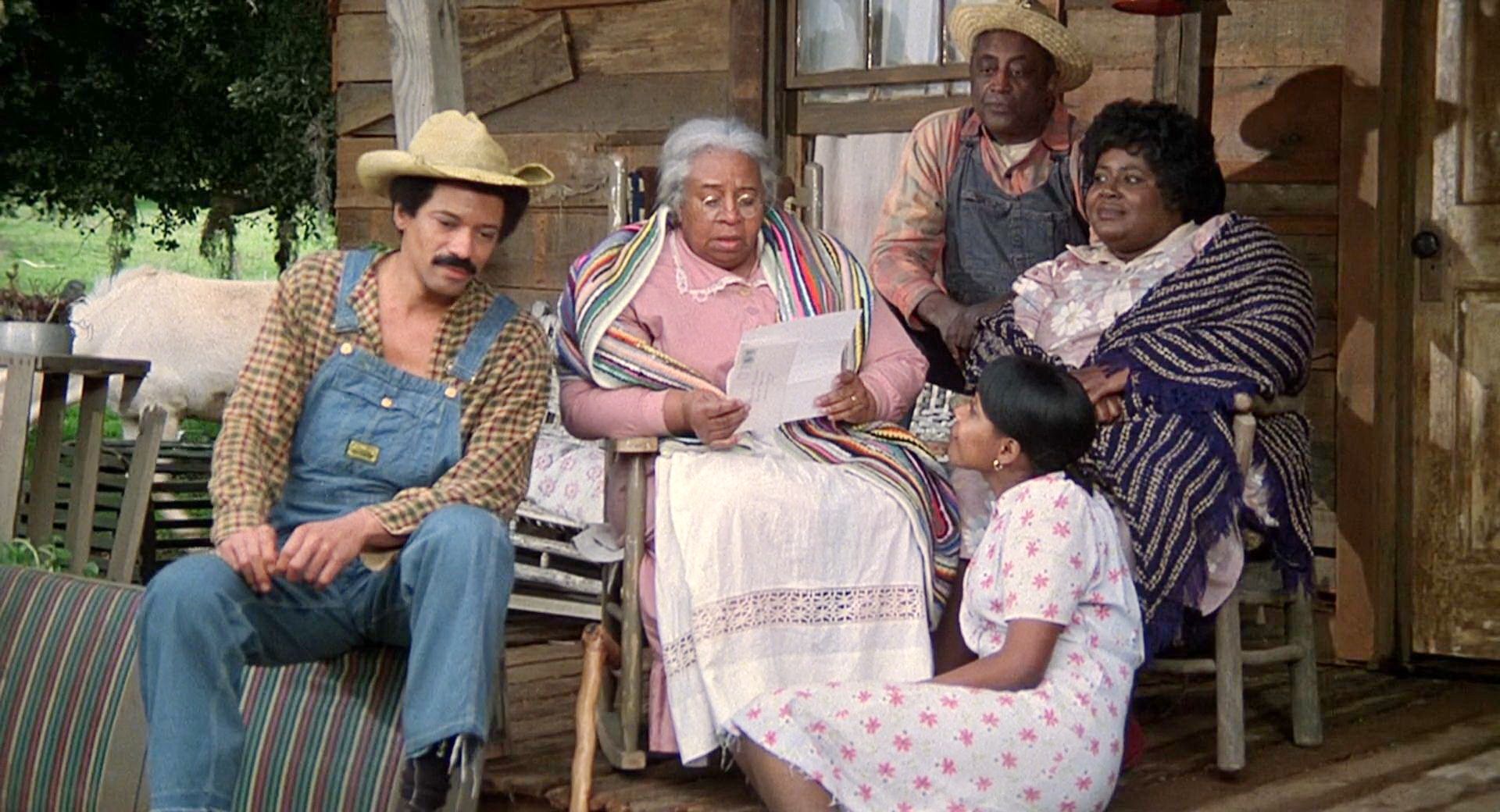 The madman who was trying to kill Navin shows up at his new apartment. When Navin sees him, he runs down the street, but the madman is right behind him. When the madman corners Navin in an alley, it looks like its the end. The madman surprisingly whips out a letter and hands it to Navin. It explains that the customer whose glasses Navin fixed wants to see him right away. When Navin arrives at the meeting, Stan Fox, the gas station customer is there. He has great news, the custom doo-dad Navin made months earlier has been turned into a new product called the “Opti-Grab”. Everyone is buying them and Navin is now a rich man. While the money goes to his head and he buys all kinds of things, the story takes a big twist and things are never the same.

The Jerk has many really funny scenes/details that stand out. One of my favorites is Navin’s monologue about how long it seems like he’s known Marie. Another thing I really liked about The Jerk was even though Navin is a dumb guy, he’s smart in other ways. He can play music (“Tonight You Belong To Me”) and he even creates something like the Opti Grab. That’s Steve’s personal touch, even his stupid characters like Navin Johnson have talents.

The Jerk is one of the downright funniest films ever made. This is probably Steve Martin’s single best comedic film. His comedy stylings and humor are completely original here. This is the film that brought him into the world of cinema and ever since he’s been exploring the medium in all kinds of different genres from movies like Dead Men Don’t Wear Plaid to LA Story to Bowfinger. Steve Martin has also branched out into writing plays and books. Steve is one of the most influential and brilliant comedic minds and The Jerk is a testament to that. 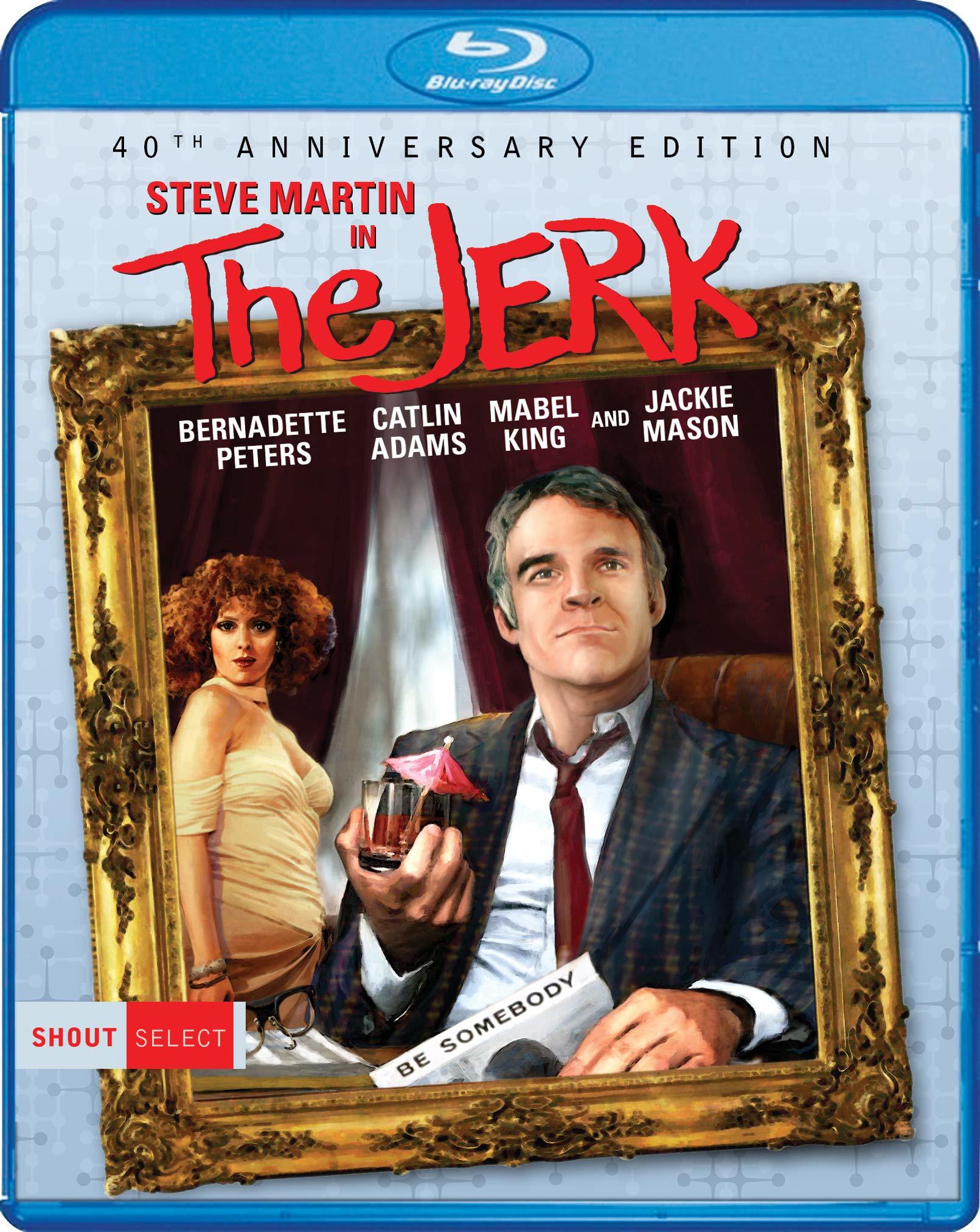