Deadicated To George A. Romero: DAY OF THE DEAD

Welcome to the third installment of our “Deadicated To George A. Romero” series. After the enormous success of 1978’s Dawn of the Dead, George decided to make a sequel. Unfortunately, due to budget restraints, he had to scale down the plot and this became Day of The Dead (1985). Although it has a beautiful poster (seriously, I consider this to be the best poster in the original trilogy), many people, including myself, think that it’s the weakest film in the Dead trilogy. Here’s what Roger Ebert said about this movie…

“But the zombies have another problem in “Day of the Dead”: They’re upstaged by the characters who are supposed to be real human beings. You might assume that it would be impossible to steal a scene from a zombie, especially one with blood dripping from his orifices, but you haven’t seen the overacting in this movie. The characters shout their lines from beginning to end, their temples pound with anger, and they use distracting Jamaican and Irish accents, until we are so busy listening to their endless dialogue that we lose interest in the movie they occupy.”

To tell you the truth, I used to hate this movie. I couldn’t stand the polarization between the scientists and the army. Plus, I thought that the subplot about an experimental zombie named “Bub” was straight up too Disney-fied for me. But after I watched it a few times, my opinion began to change. I still consider Day not as good as Dawn or Night, but there’s a supportive reason for that. Moreover, I’ve noticed more and more interesting aspects about the plot and the characters, which make it a lot better than what I first remembered. 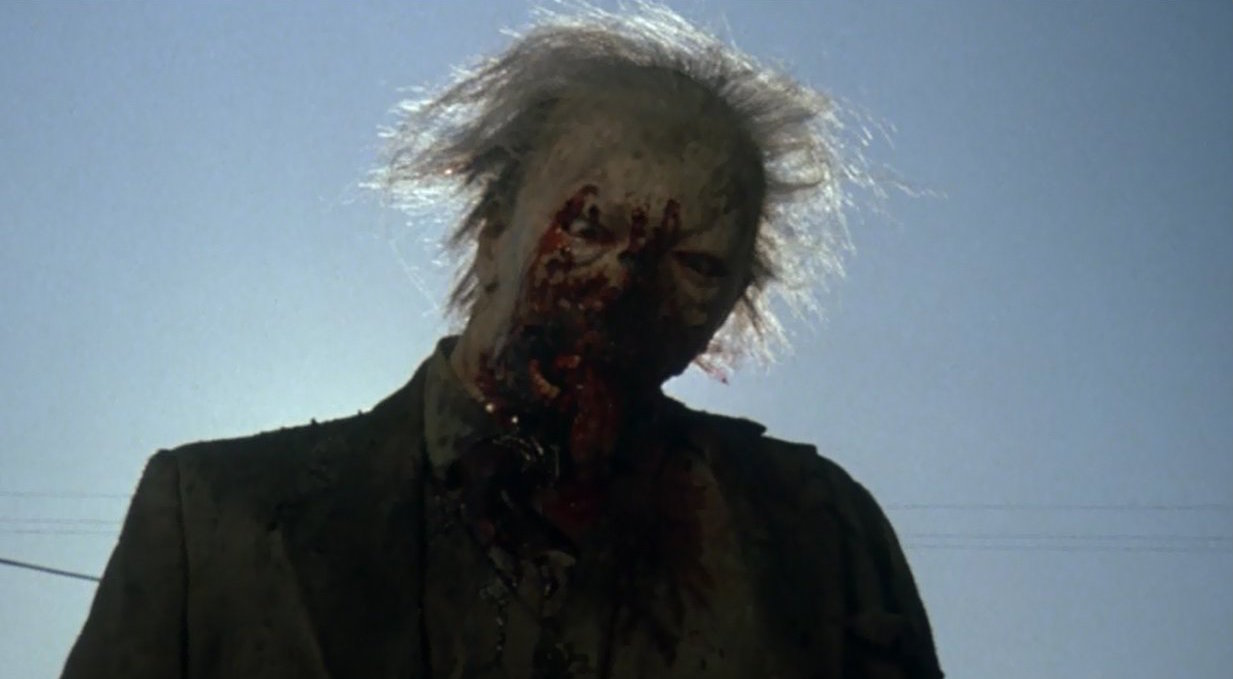 Before I start giving you the plot, I have to remind you of something here. This is the most depressing film in the trilogy. That combined with the fact that Horror movies around this time (the mid 80s) were changing from pure Terror to Horror-Comedies, like Re-Animator and Return of The Living Dead (another zombie film also released in 1985). I realize now why Day was overlooked for so many years. But is the film totally worth watching? Let’s find out!

Sometime after the apocalypse depicted in Dawn of The Dead, the zombies are already taking over the world. The amount of survivors is almost 0% and one of the last groups of humans are located underground. Welcome to the US Army’s underground base, where scientists and military live together. Dr. Sarah Bowman has to be a middle-man between the rising conflict of Captain Rhodes, a new leader of soldiers and Dr. Logan, a mad scientist. Will they reach a compromise before it’s too late? (HINT: NO.)

This entry has a more serious tone in terms of dialogue and storyline. It looks more like a Drama than Horror since it focuses less on zombie attacks and more on human issues. Everyone in this film looks pissed-off or depressed because the chaos has been going on for a long time. 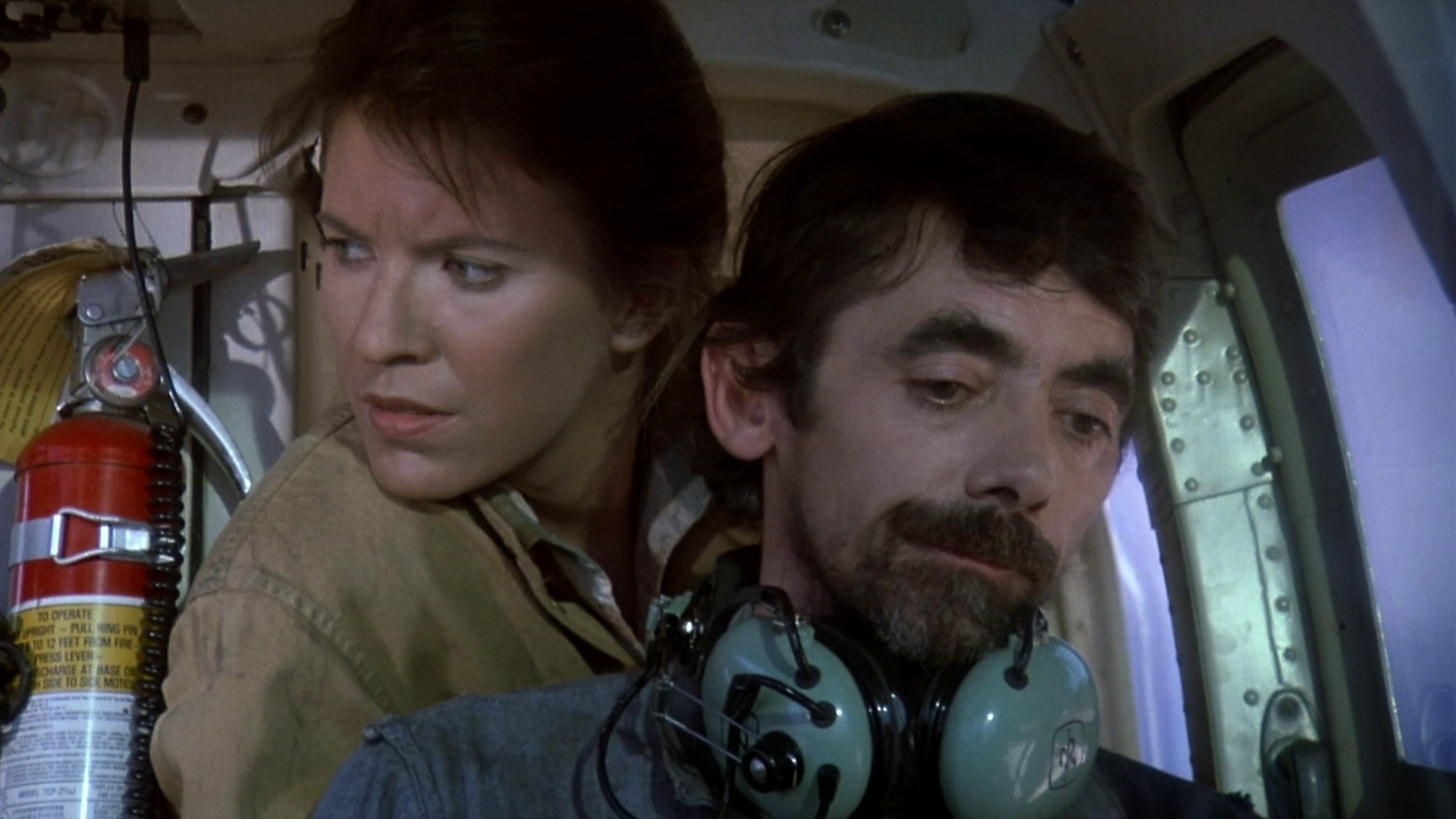 What follows is the dialogue between Sarah and John, the helicopter pilot at the base, that sums up basic theme of the movie…

“Sarah: Maybe if we tried working together we could ease some of the tensions. We’re all pulling in different directions.
John: That’s the trouble with the world, Sarah darlin’. People got different ideas concernin’ what they want out of life.”

As you can see, the main problem here is that the scientists and the army soldiers can’t stand each other. Just like what I said, I thought this characterization was too “black and white” in terms of morality, but today I revisited the film again and find out that these characters are in grey areas. Yep. Even Captain Rhodes has a reason to be an asshole. Here’s my explanation of the two different crews in the base. 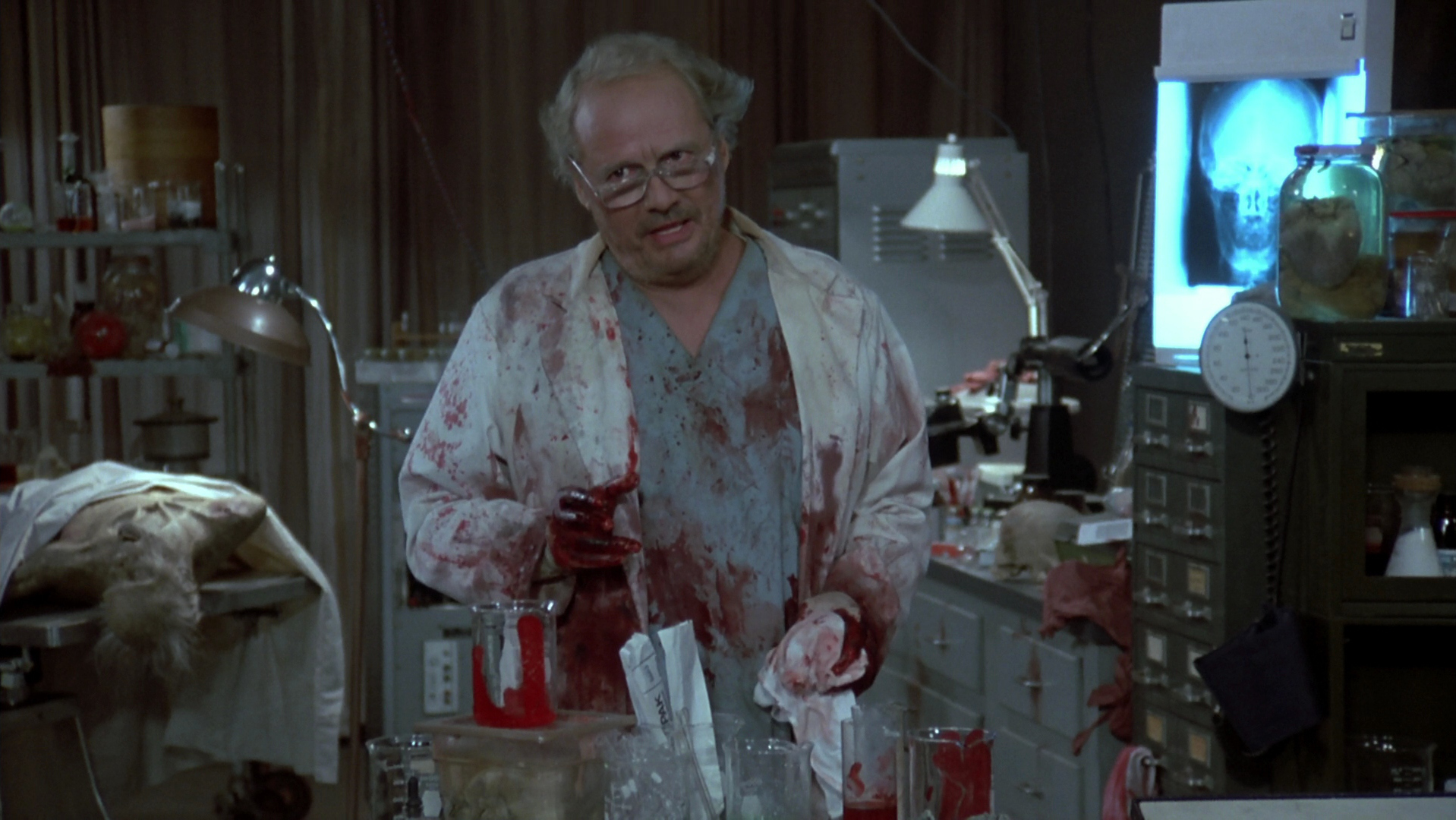 1) Dr. Logan: He’s supposed to be a good guy since he tries to train the zombies. He discovers that “It wants food, but it has no stomach. It can take no nourishment from what it ingests. It’s working on instinct, a deep, dark, primordial instinct”. In other words, the zombie eats people because of their instinct, not hunger. So he tries to change them into better people and acquires a zombie named “Bub” for an experiment. Bub’s learning process seems to get better and better everyday, but there’s two problems: Captain Rhodes doesn’t like the fact that Bub knows how to salute and use a gun and Dr. Logan’s dark side is slowly revealed to us.

Later on, Sarah finds out that not only does he get the army corpses without permission (for either training or to be the Bub’s “reward”), he also goes berzerk when a recorded cassette reveals that he always talks to his imaginative mother and father during experiments.

His character is pretty sad to begin with. He has a good plan to save the zombies, but he’s too insane to do it. Even Sarah comments that…

“All that’s required is 15 hours of fancy surgery…that only a handful of people are trained to do. I thought we were going to stop work on the neurophysical, concentrate on something more practical. […] You’re just proving theories that were advanced months ago. And you’re not even proving them correctly. You’re making a lot of assumptions. You’re wasting time trying to define what’s happening… instead of looking for what’s making it happen.” 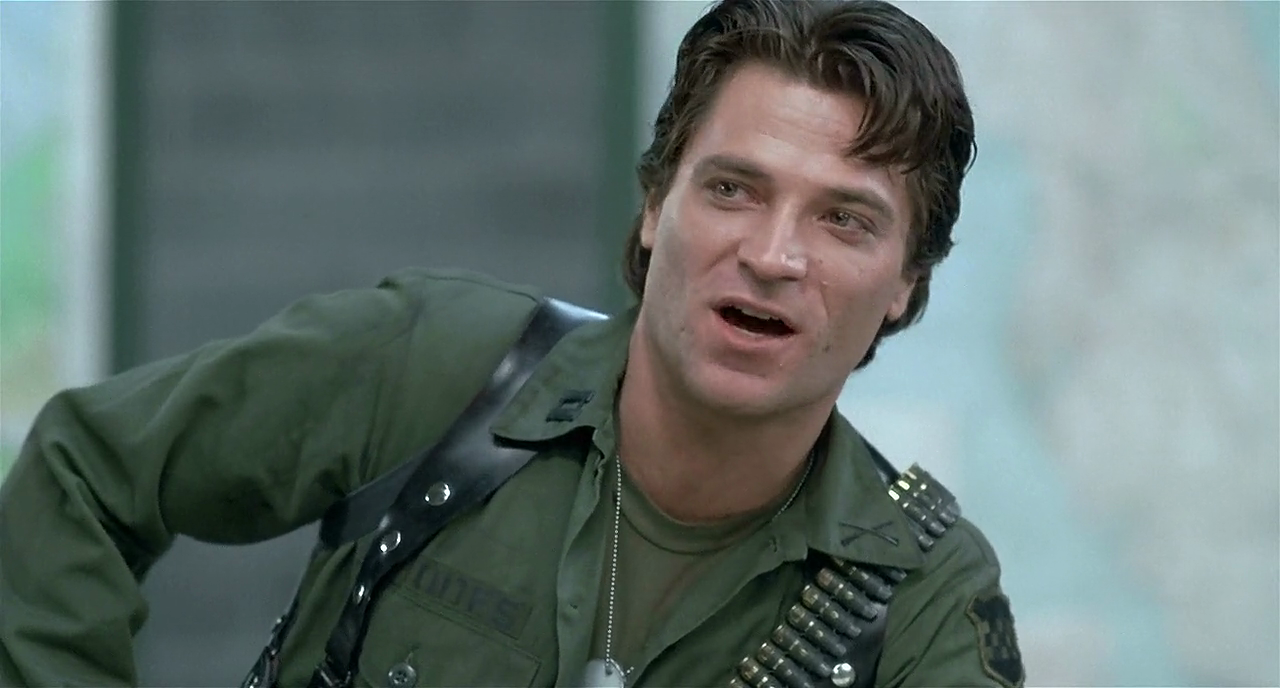 And even when his plan actually works, his mental state is already broken. This is totally different from another character…

2) Captain Rhodes: Our villain, ladies and gentlemen. He likes to believe that the only way to stop the zombie epidemic is too kill every zombie out there, but the problem is that they don’t have enough ammunition. So he has to deal with Dr. Logan who theorizes everything without giving impressive results.

“I’m in command now. And I’m telling you that you’ll work with what you’ve got. And you better start showing me some results, or you won’t have that very much longer. […] You need us the way I see it, lady. I’m not so sure we need you at all. I’m not even sure just what the hell it is you’re doing in there. Just what the hell it is my men are risking their asses for.”

This makes Rhodes furious since his job is to kill something (maybe the first part of Kubrick’s Full Metal Jacket can explain his motivation as well) and not dealing with scientific issues. This is why he decides to capture scientists as hostages. It’s because he’s sick of the never ending war with zombies and scientists. 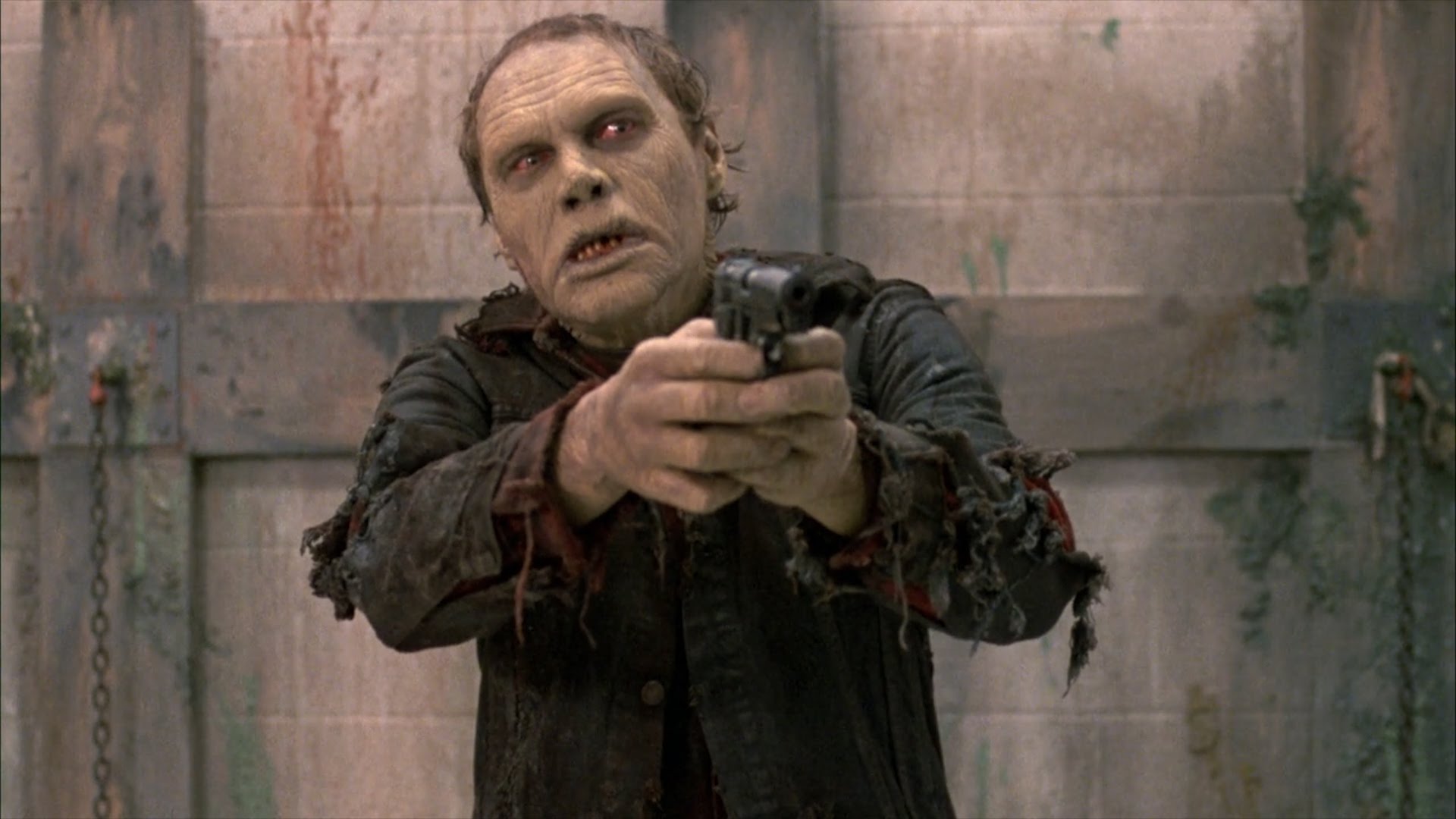 What about Sarah, our hero? She’s a scientist, but she has to stand somewhere between the eccentric Dr. Logan and power-monger Rhodes. Her confusion is somehow relieved by John, who’s basically the Master Yoda of this movie since he gives us a lot of wise words. This is his memorable monologue…

“We don’t believe in what you’re doing here, Sarah. Hey, you know what they keep down here in this cave? Man, they got the books And the records of the top 100 companies. They got the Defense Department budget down here. And they got the negatives for all your favorite movies. They got microfilm with tax return and newspaper stories. They got immigration records, census reports, and they got the accounts of all the wars and plane crashes and volcano eruptions and earthquakes and fires and floods and all the other disasters that interrupted the flow of things in the good ole U.S. of A. Now what does it matter, Sarah darling? All this filing and record keeping? We ever gonna give a shit? We even gonna get a chance to see it all? This is a great, big 14 mile TOMBSTONE! with an epitaph on it that nobody gonna bother to read. Now, here you come. Here you come with a whole new set of charts and graphs and records. What you gonna do? Bury them down here with all the other relics of what… once… was? Let me tell you what else. Yeah, I’m gonna tell you what else. You ain’t never gonna figure it out, just like they never figured out why the stars are where they’re at. It ain’t mankind’s job to figure that stuff out. So what you’re doing is a waste of time, Sarah. And time is all we got left, you know. What I’m doing is all there’s left to do. Shame on you. There’s plenty to do. Plenty to do, so long as there’s you and me and maybe some other people. We could start over, start fresh, get some babies and teach ’em, Sarah, teach ’em never to come over here and dig these records out. You want to put some kind of explanation down here before you leave? Here’s one as good as any you’re likely to find. We’ve been punished by the creator. He visited a curse on us. So we might get a look at… what hell was like. Maybe didn’t want to see us blow ourselves up and put a big hole in the sky… maybe he just wanted to show us he was still the bossman. Maybe he figured we was getting too big for our britches… trying to figure his shit out.”

What John tries to tell us is that sometimes there are things that we can’t help or even explain. The only way we can deal with it is to let the world crumble and, if we are lucky enough, we can start all over by using our faults in the past as a lesson. This quote also emphasizes the theme of movie since in the end, both Dr. Logan and Rhodes can’t make it due to their conflict. If the conflict can’t be solved, then let it happen and deteriorate by itself. That sounds like some Buddist or Taoist theory, but it actually works in real life as well. 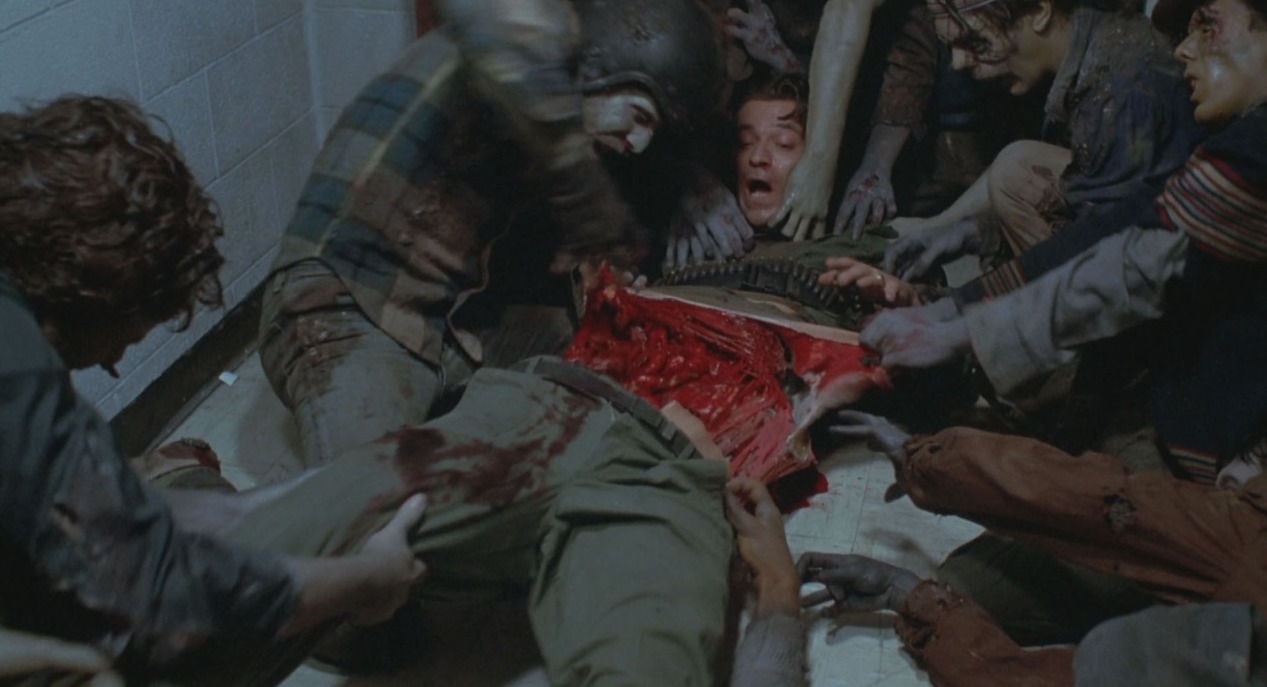 Although it’s not as attractive as the previous films due to the uber-serious tone and minimal body count as well as any major memorable sequences, Day of The Dead still has its own merits from the key message (that’s even more relevant nowadays), the special effects from Tom Savini, and surreal imagery (especially the iconic first scene and the ending sequence). Everyone who has seen Night and Dawn has to see this one in order to complete George Romero’s essay on world issues such as tolitarian rule and social conflict. Recommended.

Next time, we’ll take a look at my all-time favorite vampire movie from George Romero: Martin.