An American Werewolf in London

Writer-Director John Landis is well known for his classic comedies like The Kentucky Fried Movie (1976), National Lampoon’s Animal House (1978) and The Blues Brothers (1980), but in 1981 he took a stab (pun intended) at something different: Horror. The result is one of the most clever black comedy-horror films of our time. Landis put together his own comedic style with the horror films he grew up loving and crafted a timeless cult classic.

David Kessler (David Naughton) and his buddy Jack Goodman (Griffin Dunne) are hitchhiking their way across Europe for three months. When we meet them they are riding in the back of a truck with a bunch of sheep. Now if that doesn’t make you laugh with irony you just wont see the humor in the film. David and Jack walk through the roads of Northern England and chat about things all American guys talk about: chicks. They goof around and make jokes and things seem normal..for now. They start to get hungry so they decide to stop at a local pub to grab a bite. When they find a place they are slightly apprehensive about going in. The name of the place is: The Slaughtered Lamb, complete with a sign that shows a picture of a bloody wolfs head stuck on a pike. The boys are starving and cold so they go in anyway. The locals stop and look at the boys in a strange way. David and Jack ask for something warm to drink, but the pub lady bartender tells them they don’t serve coffee or hot chocolate, just beer or tea. They take the tea. The local men sit and talk, play darts and chess and drink their pints David and Jack notice a large pentagram on the wall of the pub, Jack asks the locals what it is and when they hear that question, everyone stops talking and one of the dart players misses the entire dartboard. Jack realizes that this pentagram on the wall isn’t a very popular subject and they decide to leave. 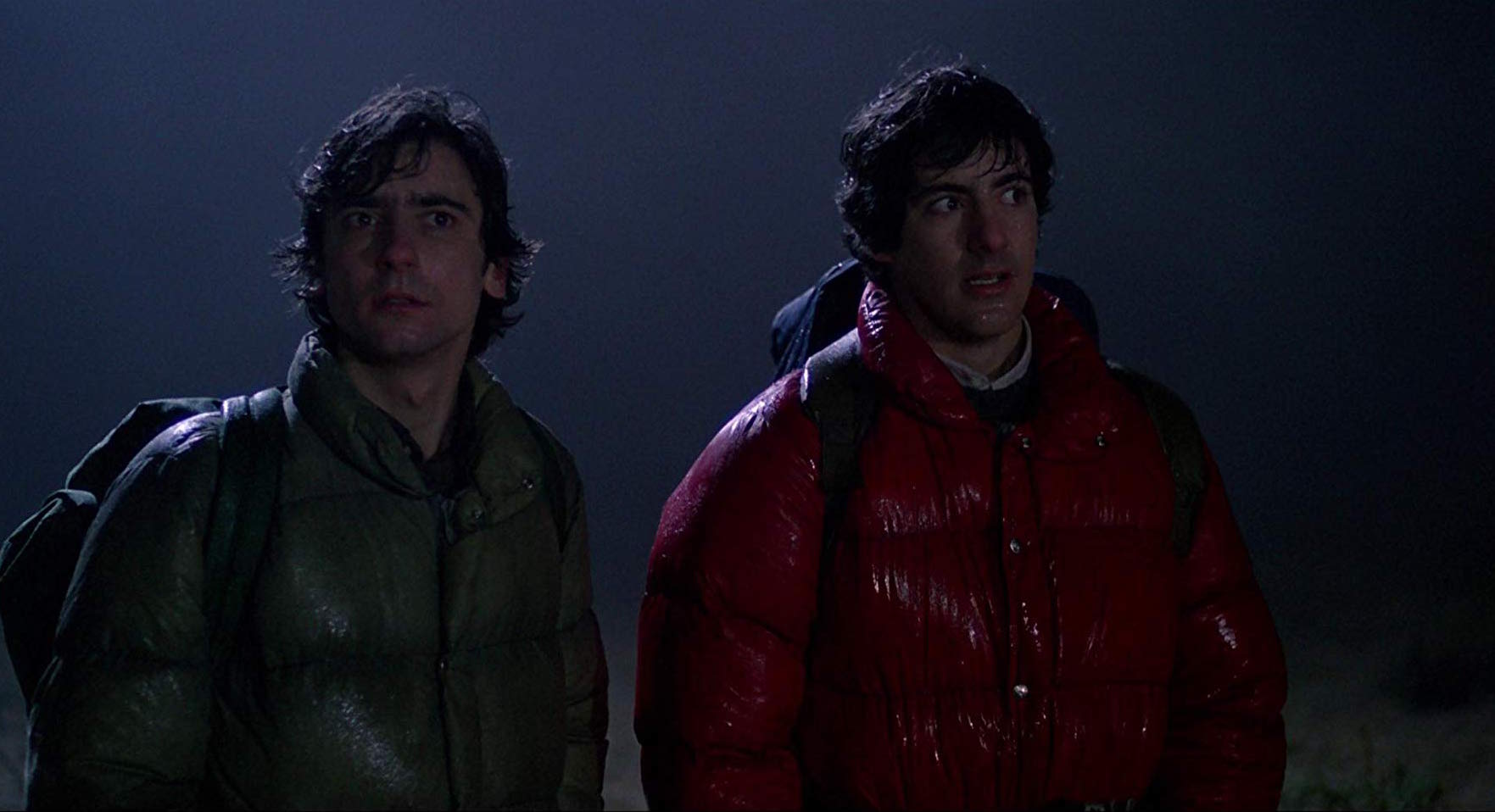 The townies speak about the horrors that may await David and Jack and the barlady tells them they cant just let the boys leave without knowing. One of the locals tells the boys to make sure to stick to the road and to not go onto the moors. David and Jack start walking down the road in the deep dark night and they hear another howl and start to get freaked out. They begin walking off the main road and pretty soon theyre out on the moors in the foggy darkness. They hear another loud howl in the near distance and decide to hightail it back to the road only now they don’t know exactly which way they came from. They walk faster at an angle and when you watch them you might be reminded of the funny looking sideshots of Cary Grant walking in Howard Hawks’ 1938 screwball comedy Bringing Up Baby (which also revolved around a wild animal). The boys hear the howls coming closer and they begin to feel like they’re being stalked by the “monster” in the darkness. They keep moving but then David slips and falls by accident on the wet grass. As Jack tries to give him a hand up, we see a large animal knock Jack down, its a werewolf!! As the werewolf unrelentingly tears Jack apart like a fallen antelope, David gets up and runs for his life, he knows he has to go back to see if Jack is alive or not, but when he returns the werewolf is waiting and he proceeds to scratch David up with his razor like claws. Suddenly with a large BOOM, the werewolf is shot by the locals who have luckily saved David’s life.

David wakes up in a hospital in London where he is being taken care of by a beautiful nurse named Alex Price (Jenny Agutter) and another nurse who’s not so pretty. As the chunky nurse cracks a joke about David being circumsized, the doctor shows up and hears her saying it. The doctor tells her she has work to do and she leaves the room. David begins having really strange and scary nightmares while he rests in the room. One day while David is alone, he sees something he doesn’t believe. It’s Jack. Jack is still his old jokester self, only his body is still torn apart and he looks slightly dead. Jack tells David that hes part of the walking dead and hes come back to to help himself and David as well. He explains David is now a werewolf (the last in the line) and he must kill himself before he kills other innocent people. David refuses to believe Jack is really there but Jack keeps prodding him and tells him he’s not joking. Jack takes a bite of some of David’s breakfast as he explains things in a comedic way. 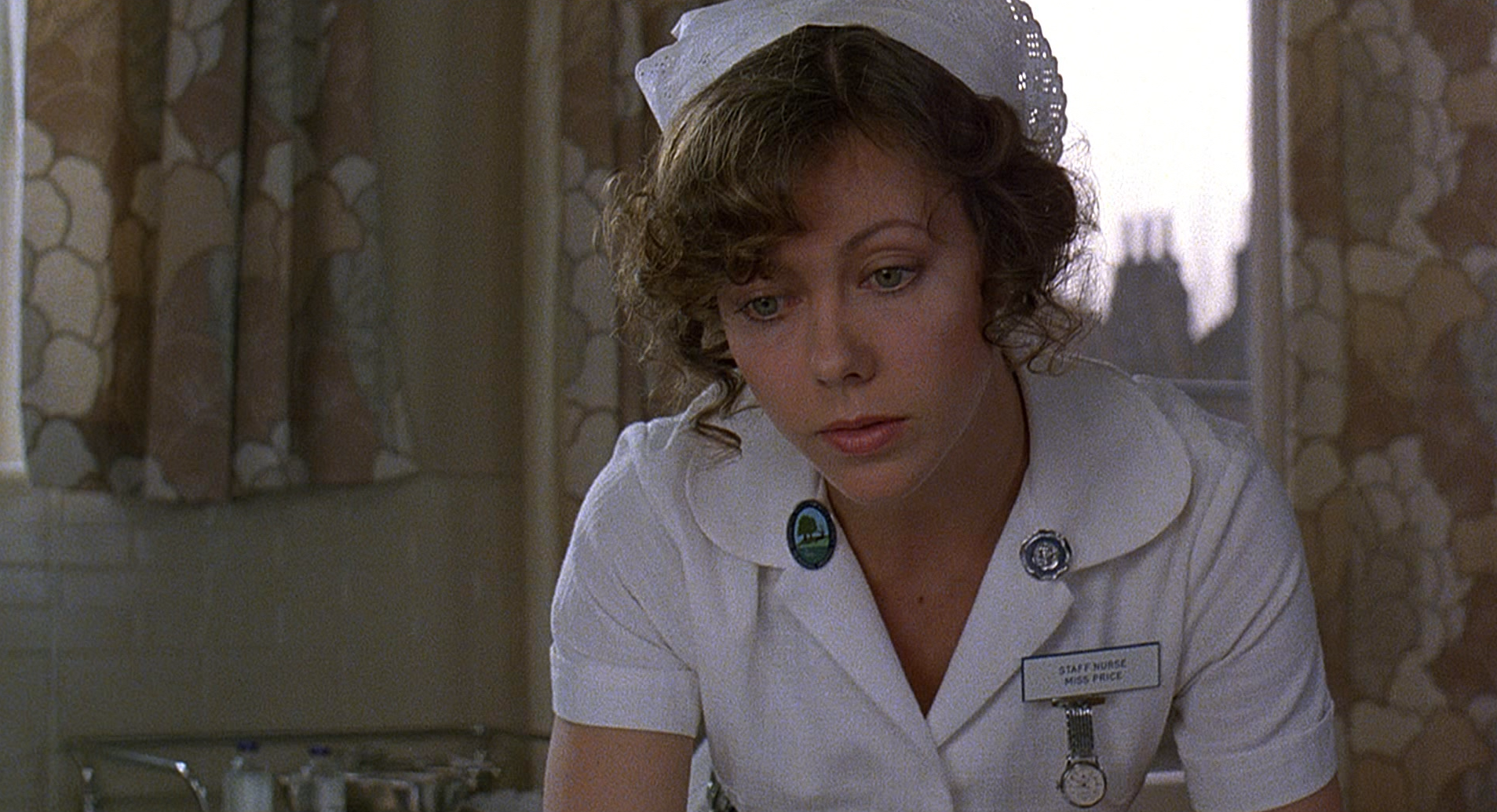 Alex takes David home with her and when they get to her flat in London, she shows him around the house and he tells her how much he likes it. Very cozy. Alex tells David he can watch some “telly” while she takes a shower, but when you see the look on Davids face you know that he wants to join her. A very sexy shower scene as the two kiss and rub soap on each other. It’s very romantic and hot as they make love in the bed (probably one of the better shot sex scenes I’ve seen in a movie). After David gets up, he goes to the bathroom to take a leak and he’s startled by Jack. Jack tells him he needs to listen and take his life before the full moon later on. We see Jack and he is even more decayed than the first time. David still refuses to believe Jack and calls him a “meatloaf”.

Meanwhile, David’s doctor decides to go into the country where David was attacked and find out just what happened. When he arrives at the Slaughtered Lamb he finds the locals arent happy to see him. They do the same thing they did to David and Jack, but one of the men gets up and leaves. The doctor leaves as well, but as hes walking to his car, he sees the local man across the street standing in the graveyard, so he decides to go over and talk with him. The doctor asks the man if he knows about David’s attacker and the man explains it wasnt a man. 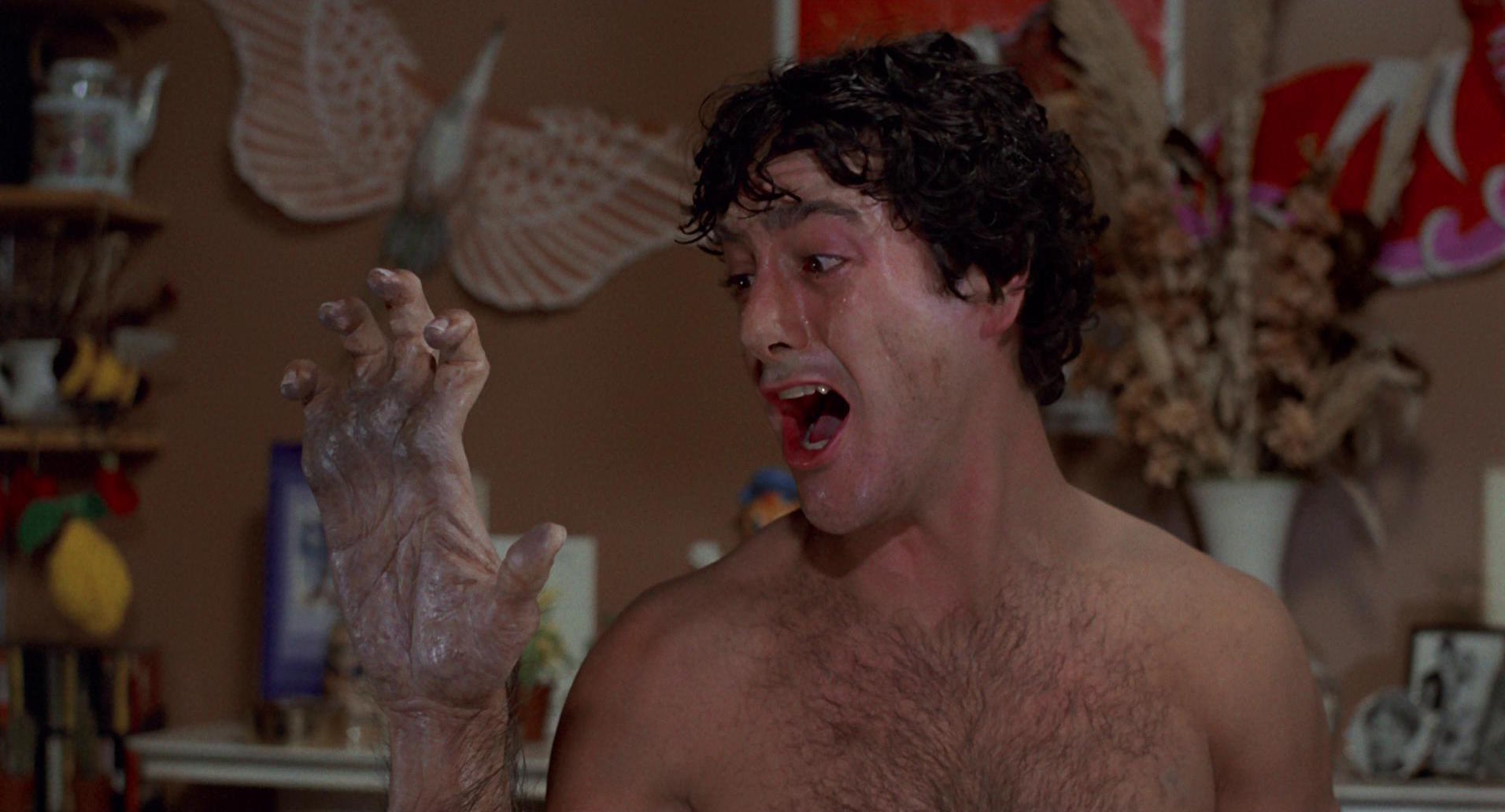 Back in the city, Alex has to go back to work and she leaves David to relax in her flat. This becomes a slight problem when David goes to go inside and the front doors locked. He tries to get in through the window where he sees a cat, the cat begins to hiss at him. David finally finds an open window and climbs inside to chill out. John Landis picks a perfect song to play over this montage, its none other than Creedence Clearwater Revival’s Bad Moon Rising. Hilarious! As David sits in a chair reading a book, suddenly he screams out in extreme pain, he yells that hes burning up and begins to take off his clothes, something terrible is happening, he is being tortured from the inside, but you wont believe it until you see the genius transformation designed by Special FX master Rick Baker. Davids body begins to stretch out and distort right before our eyes (NO CGI NEEDED). His hands begin to grow and turn into paws, hair sprouts on his skin, his face changes into a werewolves before our eyes. He slowly and excruciatingly takes the shape of a werewolf and its just awesome stuff to see. David becomes the deadly creature of the night and he begins to track down his prey. His first victims are some local English folk, then he strikes upon some homeless bums who live in a junkyard. A man gets off the subway in the city and we get a claustrophobic feeling from the way Landis shoots these scenes, it’s really excellent filmmaking. The man hears a growl in the subway tunnel and he is completely alone, not another person in sight. The growls get closer and the man knows somethings not right, he begins to run down the tunnels as the camera tracks behind him. He falls down on an escalator, dropping his briefcase and papers and we see a large dark animal slowly walk into the shot from a distance on top of the escalator. The man is now werewolf food.

David wakes up the next day, but he’s not in his bed, he’s in a cage with wolves at the zoo. The wolves don’t seem to mind him being in there, but he knows he has to leave. He climbs out of the cage but theres only one problem: he’s naked. This has to be one of the funniest parts in the film as David tries to make his way back to Alex’s flat. He hides behind a bush and we see a little English boy holding some balloons. David calls out to the kid and tells him he’s the local Balloon Thief. Then he says he’ll give him 2 pounds for the balloons. The little boy responds by saying “Why would a thief give me 2 pounds?”. David grabs the balloons and runs down the street partially covered, he runs by a park bench where two people are sitting and grabs a red jacket. As he stands in line to get on the subway, we see he is wearing only a woman’s coat. The other men in line look at him like he’s a freak. He finally gets back to the flat and he’s not even upset, he’s feeling happy and energetic and begins to kiss and nuzzle with Alex. 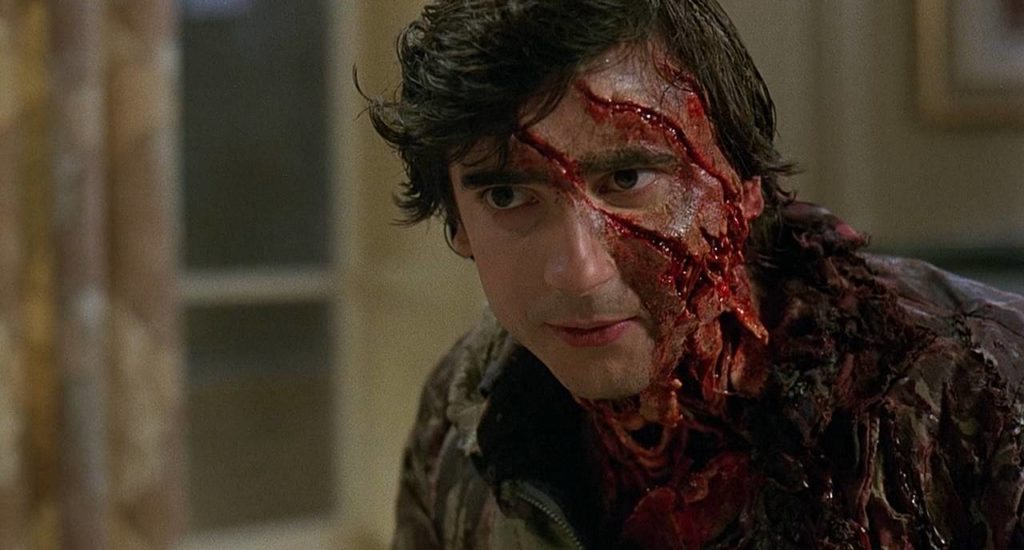 When David learns about the people being killed by a werewolf he knows Jack wasn’t just a figment of his imagination. He runs to the nearest policeman and starts to tell him he was the one who killed those people the night before. The policeman doesn’t believe him, so David begins screaming swears in the square. Everyone thinks David is a wacko and the cop doesn’t arrest him. He tells Alex he has to stay away from her and that he loves her and runs down the street. David knows he’s in deep shit so he calls his parents to tell them he loves them, only he gets his little sister and she also thinks he’s being a nut. Very funny stuff. After David gets off the phone he decides he’s going to take his life, so he takes out a Swiss Army knife and gets ready to slit his wrists, but he can’t do it. He gets out of the phone box and decides to go into a porno theater instead (the movie playing is “See You Next Wednesday” which also pops up on a poster in Landis’ 1983 comedy Trading Places). While he’s sitting inside, Jack shows up, this time even more decayed and he looks like a skeleton with some hair. He introduces David to the other people he’s killed and David says he’s sorry, but thats not enough, the other victims want him to die NOW. Pretty soon, another full moon rises and David becomes the werewolf once again.

An American Werewolf London remains one of the all time greatest horror comedies. We give it our highest recommendation to movie fans.