It’s Boxing Day! Well, at least in Europe it is. Time to open up the rest of your Christmas presents (and/or box up goods for donations). But for me, this means only one thing….it’s time to watch the Rocky movies again! Now, I know that it’s a stupid pun, but isn’t that a good excuse to watch one of the most popular movie franchises? Due to time limitations and the fact that I’ve already seen most of them (except Rocky Balboa and Creed, which sounds more like a documentary about a particular Rock band), I picked only two films to watch: Rocky and Rocky IV. 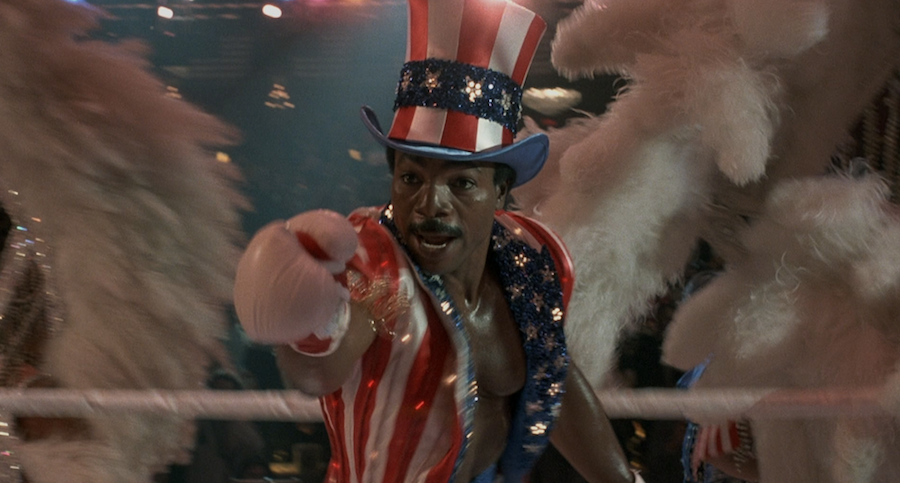 This made it easier to see the drastic changes between the two movies. The original Rocky from 1976 absolutely deserves an Academy Award due to the strong characterization and interesting storyline about Rocky Balboa (Sylvester Stallone), a poor boxer from Philly who works for a loan shark, and tries to become a better person after a famous heavyweight champ named Apollo Creed (Carl Weathers) offers him a fight. It’s an intense story of love, gritty working class life, redemption, ironically, not only for Rocky but his coach, Mickey (Burgess Meredith) as well since he didn’t really care much about Rocky until the match was announced. That combined with low-budget filmmaking that made it look more like cinema verite than a glitzy Hollywood film, Rocky became the sleeper hit of 1976 and set the standard for sports dramas ever since. After another two sequels (in 1979 and 1982) we got possibly the most (in)famous installment in the franchise: Rocky IV. Why do I say infamous? Well, you can go ask people about bad movies from the 80’s and there’s a chance that you will hear this film mentioned. Let’s take a look at what happens in in this 91-minute camp classic…

After Rocky finally becomes friends with Apollo and their training helps him beat Clubber Lang (played by Mr.T) in the previous movie, their lives couldn’t be any better. That is until a Soviet boxer named Ivan Drago (played by Dolph “I must break you” Lundgren) and his crew arrive in America to “compete as an international sportsman and ambassador of goodwill”. This upsets Apollo since he thinks that it is a humiliation for the country and that he can make a comeback after five years of retirement. Unfortunately, he underestimates Drago, the robot-like boxer and he’s literally killed in the boxing ring by the Russian. Then it’s time for Rocky to take revenge for not only his friend, but for America.

Okay, before we move on, let me recap how it gets to be this over-the-top. The first two movies are focused more on how the main characters deal with situations that can happen to athletes or ordinary people. Rocky is all about trying to be a better boxer and proving to himself that he’s got what it takes, while the second film is all about how NOT to deal with sudden fame. Then, the third movie shows up. Although it has an interesting message about why we shouldn’t cry over spilled milk, underestimate competitors and get lost in ego, the fact that we see Hulk Hogan fighting Rocky in the very first scenes somehow sets up the goofier tone of the later films. And then Rocky IV happens… 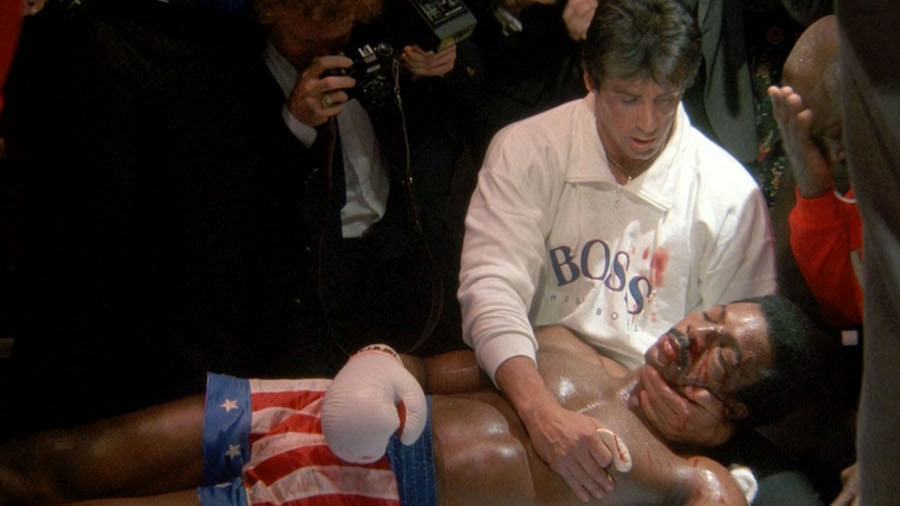 Instead of a brilliant characterization that made the first two films memorable, what we have is basically a Saturday morning cartoon version of our favorite characters. The fact that you see a robot maid in Rocky’s house after 7-8 minutes without any reasonable context should be a clue. Also, another problem is how convincing it is. There’s no way you can feel sorry for Apollo after his death since there’s a lack of emotional development with the audience and insight with his character. Everyone lacks the depth of emotion and, moreover, there’s no background for the Soviet characters at all. It’s like Ivan Drago is a character in some Tekken video game (although in the end it’s implied that he can’t stand the pressure from everyone around him anymore). I mean, at least villains in Bond movies explain their plan and motivation.

But that doesn’t mean that the script has no real substance at all. The main theme for Rocky IV is about change. First, it’s Rocky who tells Apollo NOT to get involved with the fight against Drago….

“Apollo, you’re a great fighter. No doubt about that. But we have to face the facts too. You don’t want to believe it, but maybe the show is over. […] I know we can’t be born again, but we have to change sometimes. I like who you are too, but look at that. You don’t want to believe this, but that ain’t us no more. We can’t do that…the way we did before. We’re changing. We’re turning into regular people.”

“That’s easy for you to say. You’re still on top. What happens when you’re not on top? Then what? Where do we go? We sure can’t be born again. […] I don’t want to change! I like who I am! […] Maybe you think you’re changing…but you can’t change what you really are. We’re born with a killer instinct you can’t turn off and on like a radio. We have to be in the middle of the action because we’re warriors. Without some challenge, without some war to fight…then the warrior may as well be dead.”

After Rocky decides to let Apollo fight Drago (Apollo tells him to “Promise me you are not gonna stop it.”), everyone around him seems to be worried about his choice to fight the big red machine in Russia. This includes Adrian, his wife…

“Give it some time. Don’t do this. A lot of people live with hurt. Even if you win, what have you won? Apollo is still gone. Why can’t you change your thinking? Everybody else does!”

But that doesn’t stop Rocky from delivering the #2 patriotic speech in this film (#1 is the epic lines after he wins the match, we’ll get there…)

“Adrian, a lot of people don’t have the choice. I do. […] This ain’t everything. This house and the stuff we have ain’t everything. There’s a lot more than this. […] Because I’m a fighter. That’s the way I’m made. That’s what you married. […] We can’t change what we are. […] You can’t change anything. All we can do is just go with what we are. […] Adrian always tells the truth. Maybe I can’t win. Maybe the only thing I can do…is just take everything he’s got.But to beat me, he’ll have to kill me. And to kill me…he’ll have to have the heart to stand in front of me. And to do that…he has to be willing to die himself. I don’t know if he’s ready to do that. I don’t know.” 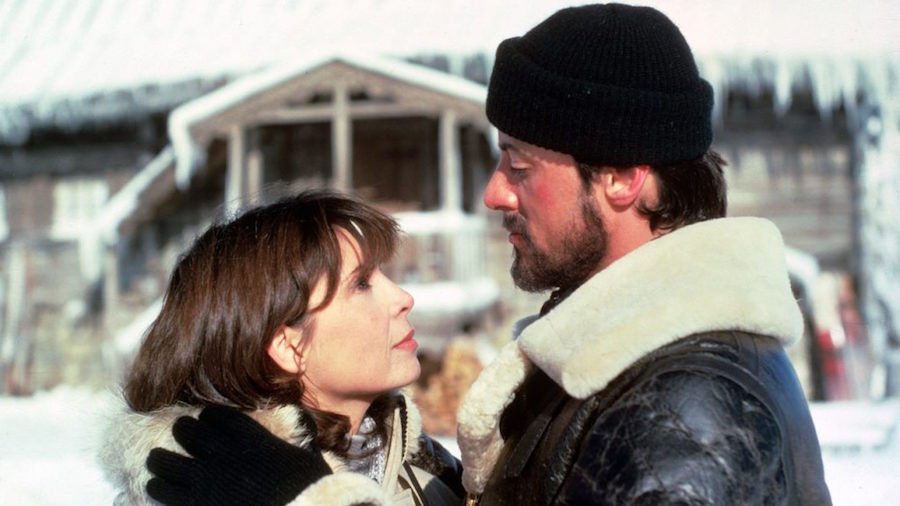 And after Rocky beats the hell out of Drago in the end and witnesses the changing attitude of the Russian audience that is somehow cheering for him at this point (while Drago is totally pissed off at his crew who keep pushing him and yells “I fight to win…for me! For me!”), he delivers the speech that somehow became an instant joke about movies from the 80’s…

“During this fight, I’ve seen a lot of changing, in the way you feel about me, and in the way I feel about you. In here, there were two guys killing each other, but I guess that’s better than twenty million. I guess what I’m trying to say, is that if I can change, and you can change, everybody can change!”

A lot of people wonder what the “change” is and start joking about it. What they miss here is his attitude that went from “I’m too old for this shit” to “I can do it!” in the end. Although I’m not sure whether they have to use the word “change” in the dialogue (and I have no idea how this speech could actually end the Cold War), it’s still an uplifting message. 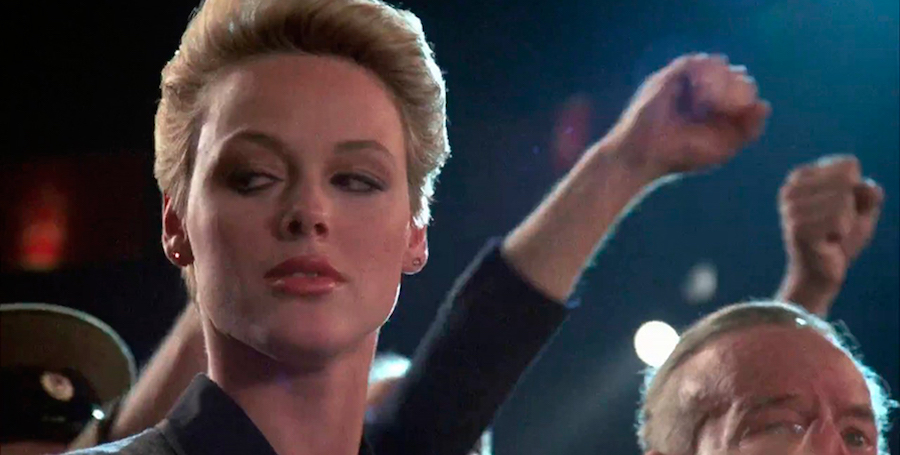 Another thing I have to mention is the extensive use of music and montage. They could advertise the film as “Rocky IV: MTV Edition” since we have, not one, not two, but FOUR music video montages that take up 18% of the movie runtime. Considering that the characterization and storyline is much weaker, the usage of pumped-up music affects a lot of the film’s emotional tone since it generates that exciting atmosphere. Four montages including… 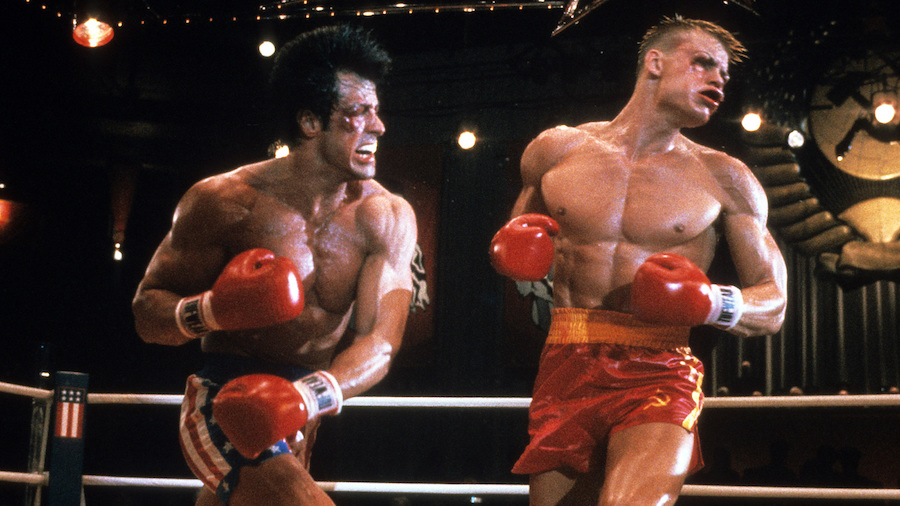 I don’t care what people say. After I watched these montages, it felt like my adrenaline hormone worked like never before and my biceps probably got bigger. It’s surprisingly effective to make us believe that our hero has already done an extensive exercise in order to fight. I must mention that the training montage shows similar training between the two characters, but with different methods. While Drago has an expensive high tech machine and steroids to help him, Rocky just chops down trees and lifts rocks, etc. It shows the stark contrast between these two men quite well.

And if that’s not enough, there’s also a special appearance by James Brown performing “Living In America” during Drago’s introduction in the match against Apollo! What’s the point of that?! But this is also another cheesy thing that people remember about it.

So next time you watch Rocky IV, don’t expect it to be a cinematic masterpiece like the first movie in the franchise, but be prepared to witness one of the manliest films that could’ve been only made during the 80’s. It’s also a good litmus test for the movie geeks to see if they can enjoy the film without regarding the script or cinematic standards. Highly Recommended.