In my review for On Her Majesty’s Secret Service I stated that on December 25th I’d be watching two Christmas movies back-to-back: Scrooged and The Star Wars Holiday Special. Well, I’m a man of my word. I decided to kickstart the holy day with one of the most notorious TV specials of all-time. What can I say about the legendary Star Wars Holiday Special? Well, it’s just a variety show that has several segments loosely tied together by a plot about celebrating “Life Day”. Unfortunately, those segments are either very annoying or not funny at all (except the famous animated bit that introduces Boba Fett for the first time). Keep in mind that I already take a medication that makes me a bit sleepy, but getting through this mess was still pretty hard. 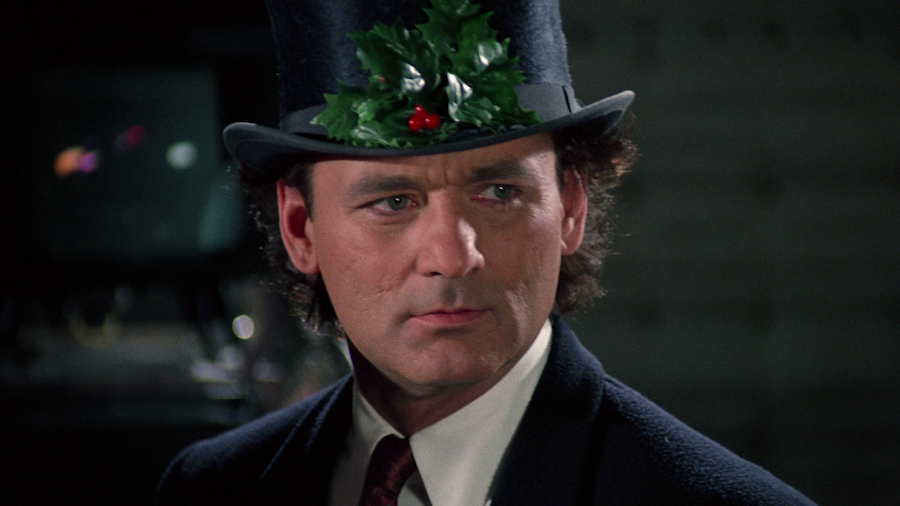 After I survived it mainly due to several 70’s commercials on the edition that I have. My favorite one is for a Whirlpool appliance (which is this patriotic ad that doesn’t look cheesy or lame at all) I realized that there’s another movie that I’ll watch today…and it’s a good one too! I discovered Scrooged months ago when I looked at a list of “Best Comedy films of all time” and, somehow, this movie popped up. I remembered that it was hilarious and filled with dark humor. But after watching it again today, I found more interesting things to say about it.

The plot concerns Frank Cross (Bill Murray), the arrogant president of the popular IBC Television station who doesn’t care about anything except good ratings and himself. Even around Christmas time, his behavior doesn’t change in the least. He fires one of his employees, he gives only a towel as a present to his hard working secretary (instead of something more valuable or a special bonus), he hates his boss and isn’t satisfied with the new IBC promo for a live telecast of “A Christmas Carol”. Later that night, he is visited by the ghost of his old boss (John Forsythe) who warns Frank about the danger of being selfish and to improve himself before it’s too late. Of course, Frank still doesn’t believe it. So three more ghosts are waiting in line to visit Frank and teach him about the virtue of being kind to his fellow man. 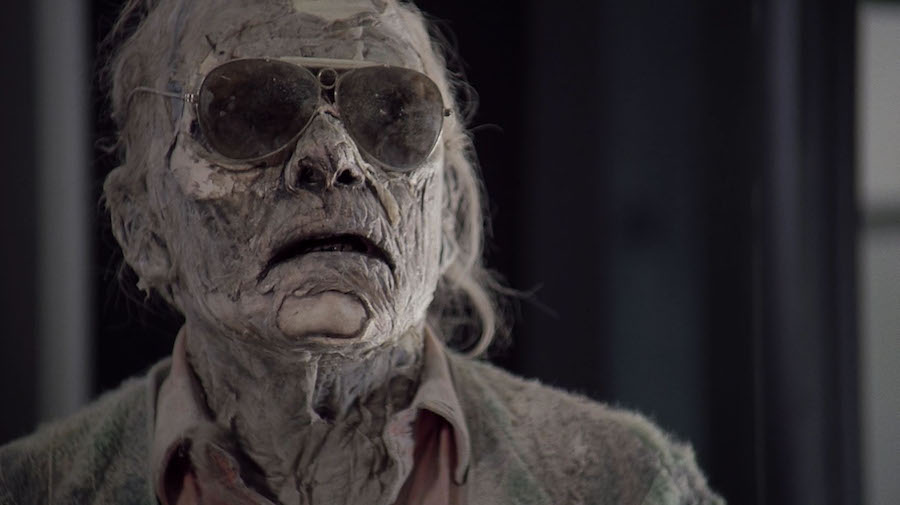 As you may have guessed, this is another adaptation of Charles Dickens’ classic tale A Christmas Carol, but there are several reasons why this one has so much prominence. First off, Scrooged can be categorized as Horror/Comedy/Fantasy. Yep, there are several scenes that are supposed to be a little bit creepy (like when the Ghost of Christmas Future shows up) and the humor here ranges from social satire to plain slapstick. One of my favorite moments is when Frank creates a typical nice family promo for the A Christmas Carol live telecast at IBC. He changes it to this ultra fear-mongering version featuring acid rain, a terrorist attack, and freeway killers. Do they have anything to do with Christmas? Absolutely not! Even Frank admits this when he has a conversation with his employee Eliot (Bobcat Goldthwait):

Eliot: Mr Cross, what exactly does that ad have to do with “Scrooge”?
Frank: Nothing. Why?
Eliot: You can’t show that commercial. If you run that…you’re gonna frighten people. […] That looked like the Manson Family Christmas Special.

As you may guess from his response, Eliot gets fired that day. But this scene illustrates the fear-mongering and sensationalism in the media. Frank believes that the more controversy, the better ratings he’s going to get. Later on, someone actually dies because of how horrifying that promo is, but instead of stopping it, Frank wants it to be on the air every half hour! It shows you how little he cares about society and only about ratings. By the way, there’s subtle humor here that the audience may not notice. There’s a small section in Frank’s office that has this weird sticker that says…

It’s a clever way to show us how self-obsessed this man is since he uses the dictionary definition of the word “cross” (his surname) to show how important he is. 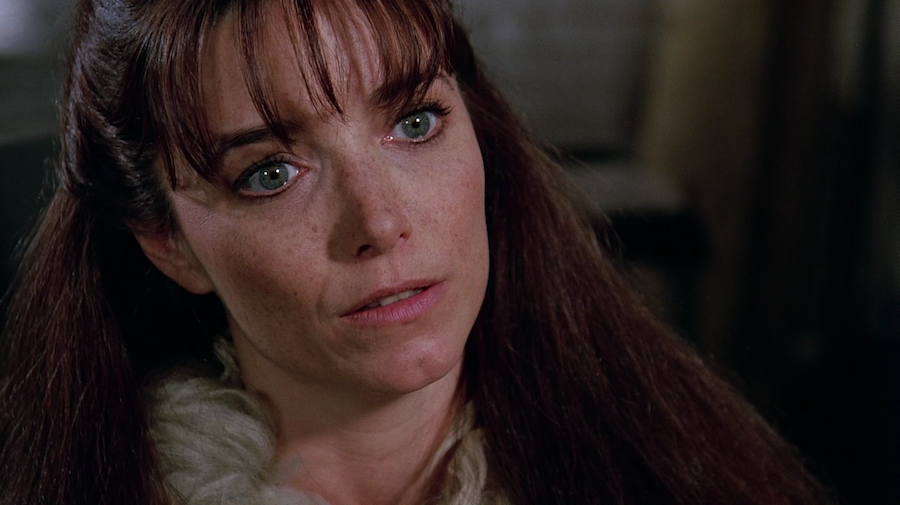 Another interesting detail in the script is that, in later parts of the movie, the adventure Frank has with the ghosts are intercut with several scenes from the IBC teleplay that’s supposed to either reflect what just happened to him or foreshadows what’s going to occur. It’s pretty smart and useful for people who’ve never heard, read, or seen any adaptations of the Charles Dickens classic so with Scrooged they can see the similarities easier.

Next thing I’d like to talk about is characterization. The only one I’m going to talk about is Frank. Thanks to the Ghost of Christmas Past (David Johansen) (which is also one of my favorite characters), we know exactly where Frank’s greedy attitude came from. Back when he was a kid, he got 1 lb of veal from his Dad instead of a proper Christmas gift like train models or toys. The reason?

“Then go and get a job and buy a choo-choo! […] All day I listen to excuses why people can’t work – “My back hurts. My legs ache. I’m only four!”. He’s gotta learn that life’s doesn’t come on a silver platter.”

That’s why later on when he falls in love with Claire (Karen Allen) he still focuses more on his job at the TV station instead of their date. This stops their relationship for several years until Frank is haunted by the ghosts, so he calls her again. At first, he still acts badly towards her. But in the end, after he looks at his past, his stakeholders’ present (that shows his secretary’s problems with her family and his brother who always loved him, no matter how terrible Frank is), and his future (that could happen if he continues to be this way), he changes to a whole different person. He even interrupts the Christmas Carol teleplay to deliver a heartfelt monologue to the TV audience. This is possibly the greatest thing Bill Murray has ever done. Seriously! The monologue is fun, cheerful, and reasonable enough to motivate the audience to be a better people in the future. Combined with the comedic moments and superb acting from one of my all time favorite actors, I seriously hope that this monologue will be aired all around the world during Christmas day since he really convinces us why it’s better to start caring about other people. 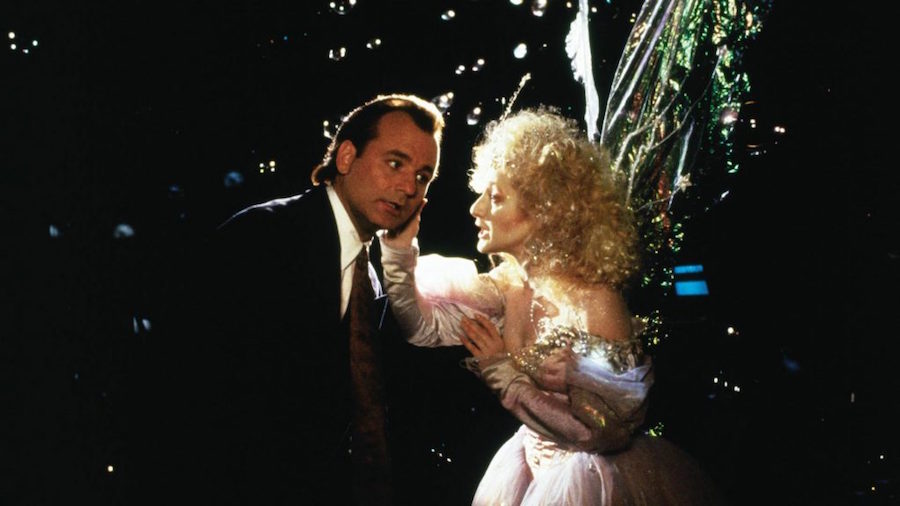 Coincidentally, the theme of caring for people around us is similar to another of Bill’s classic movies: Groundhog Day. In that film, it teaches us to be more optimistic, help other people, and do the best we can everyday. While the theme in Scrooged is that we should be generous, not only on Christmas day, but also every day whenever we can…

“I’m not crazy. It’s Christmas Eve! It’s, it’s the one night of the year when we all act a little nicer, we, we, we smile a little easier, we, w-w-we, we, we cheer a little more. For a couple of hours out of the whole year, we are the people that we always hoped we would be! It’s a miracle, it’s really, a sort of a miracle because it happens every Christmas Eve. And if you waste that miracle, you’re gonna burn for it. I know what I’m talking about. You have to do something. You have to take a chance. You do have to get involved. There are people that are having, having trouble making their miracle happen. There are people that don’t have enough to eat, and there are people that are cold. You can go out and say ‘hello’ to these people. You can take an old blanket out of the closet and say, ‘here.’ You can make ’em a sandwich, and say ‘Oh, by the way, here!’ I get it now! And if you, if you give, then you, then it can happen. Then the miracle can happen to you. It’s not just the poor and the hungry, it’s, it’s everybody that’s gotta have this miracle! And it can happen tonight for all of you! If you believe in this pure thing, you’ll, the miracle will happen and then you’ll want it to happen again tomorrow! You won’t be one of these bastards who says, ‘Christmas is once a year and it’s a fraud.’ It’s not! It can happen every day! You’ve just got to want that feeling! And if you like it and you want it, you’ll get greedy for it. You’ll want it every day of your life, and it can happen to you! I believe in it now. I believe it’s gonna happen to me now. I’m ready for it! And it’s great. It’s a good feeling. It’s, it’s really better than I’ve felt in a long time. I’m, I’m, I’m ready. Have a Merry Christmas, everybody.” 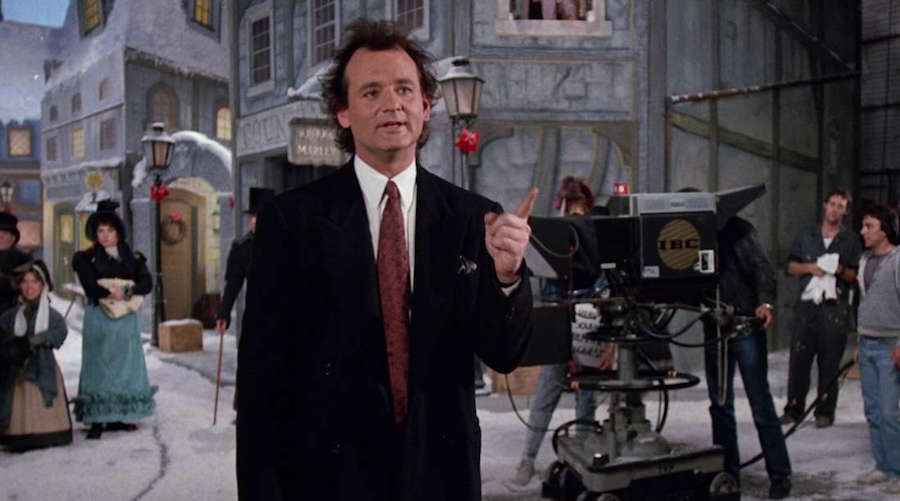 To sum up, Scrooged is over-the-top fun that showcases not only Bill Murray’s acting talent, but also successfully convinces the audience as to why charity is necessary on Christmas and in everyday life. It’s not that family friendly due to swearing or sexual references (like a fictional TV show that spoofs Leave it To Beaver called “Father Loves Beaver”), but if you want something different from the usual Christmas fare, this is the right one for you. Highly recommended.