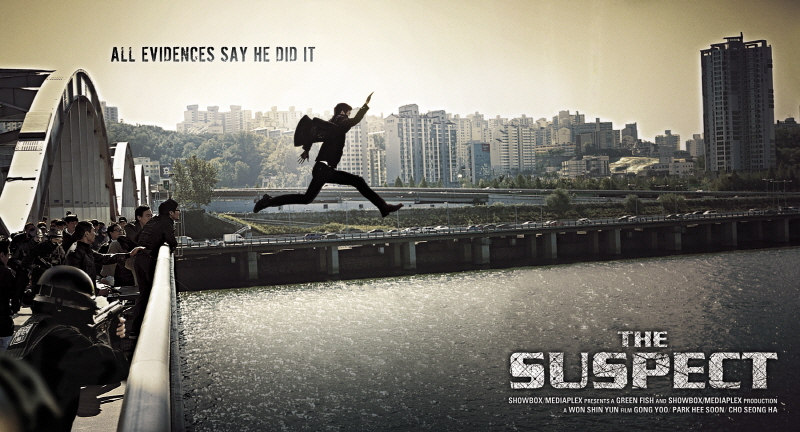 The Suspect is not an arthouse action movie in the style of A Bittersweet Life (Jee-woon Kim, 2005) or The Man from Nowhere (Jeong-beom Lee, 2010), but rather a Korean answer to The Bourne Identity.

Like Jason Bourne, the protagonist of this movie, Don-cheol (Gong Yoo), is ace spy on the run. He’s actually a former North-Korean spy who defected to the South after he was betrayed during a mission and his wife and child were killed. In South-Korea he has become a driver for a prominent businessman, but when his new boss is murdered, he becomes the main suspect. The whole world – or at least both Koreas – seems after him and the only one willing to help him, is a female reporter, who has an agenda of her own.

The Suspect offers some of most spectacular car chases and close combat scenes in recent memory, but it would have benefited from a more straightforward approach. The script jumps back-and-forth in time and for about an hour we hardly have an idea what’s going on. These type of labyrinth stories, in which nobody can be trusted, need a central character we can identify with. Robert Ludlum (who invented Bourne) was smart enough to give the character some recognizable human traits before sending him into the labyrinth: we didn’t know who Bourne was, but we knew he was a vulnerable human being and therefore his fears became ours. We only start feeling some sympathy for the central character in this movie when he (and we) find out that his daughter might still be alive ….

It this discovery, this story-element that seems to ignite the entire movie: director Sin-yeon Won manages to pick up the pieces and come up with a more coherent and exciting second half. The person who looked like a almost superhuman fighting machine, becomes a man of flesh and blood, fighting for his life, desperately trying to find that one person that means more to him than anything else. And then there’s this wonderful ending. Stories like this cry for a redemptive ending, but directors – Korean directors in particular – often opt for a sugary, sentimental twist that fails to ring true. The final scene of The Suspect is restrained, some will even call it anti-climactic, but it hits all the right chords and I won’t say anything more about it.

Trivia: Before The Suspect, the actor Gong Yoo was best known for romantic roles and TV commercials. He went on a special diet for three months and followed martial arts lessons to lose body fat and gain muscle strength. He performed all car chases, rock climbing and skydiving by himself, without using stunt men. In an interview, he stated: “I was hungry during filming, which helped: even gentle beasts get aggressive when starving.”