In New York City, 1941 we are introduced to successful playwright Barton Fink (John Turturro) an idealistic artist who is inspired to forge a new kind of theater by telling grand stories about “the common man”, his stock in trade. When Capitol Pictures in Hollywood gets word of his genius, they pay for him to travel out to the West Coast to write a screenplay. Barton is reluctant about entering into this kind of format, but he sincerely wants to bring the same kind of quality to the silver screen as he does to his plays. 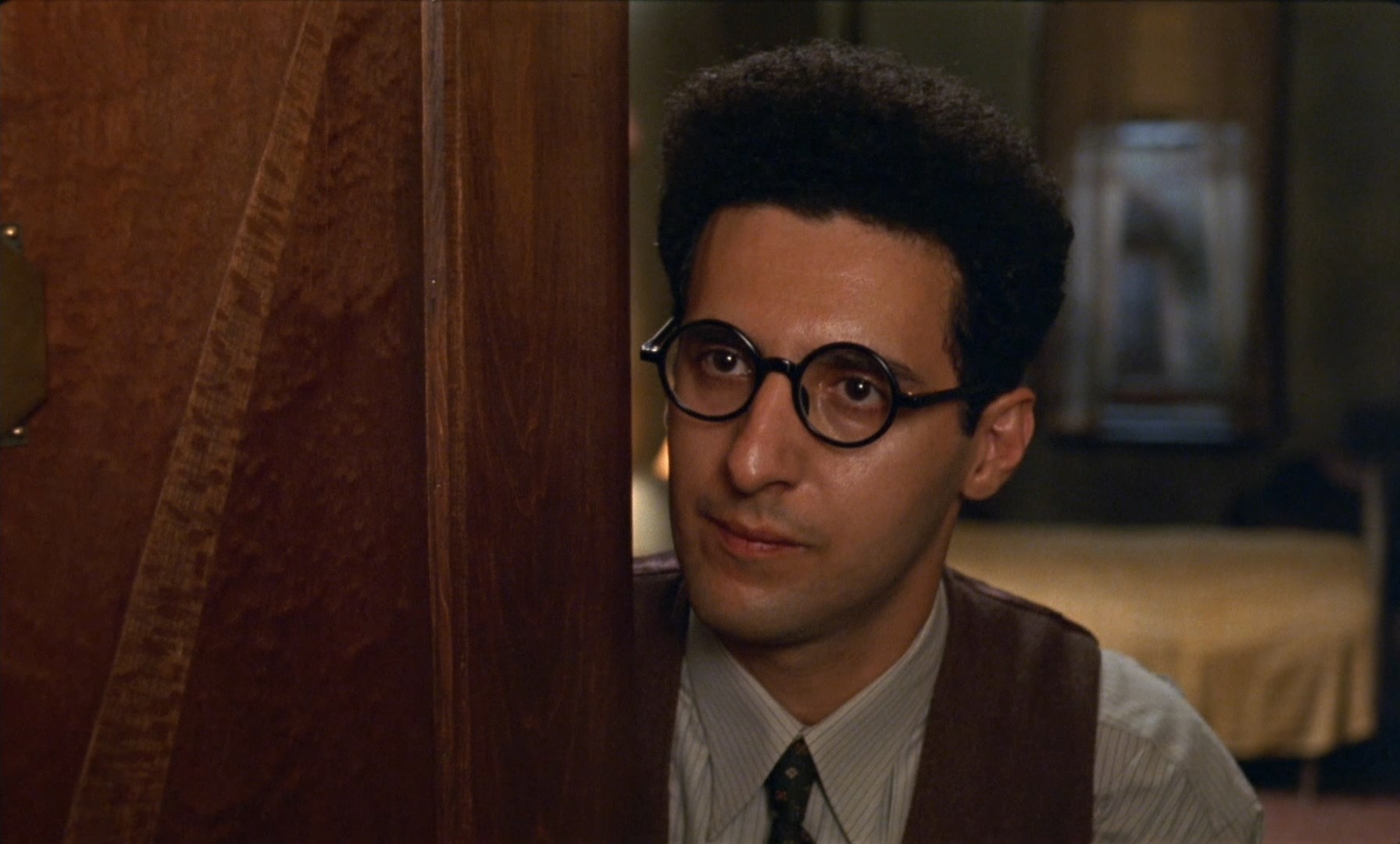 Upon arriving in Los Angeles, he checks into the Hotel Earle (their slogan is “A Day or a Lifetime”), and is greeted by Chet (Steve Buscemi) a mousy hotel clerk who enters from below the floor and comically inquires if Barton is a “Trans or a Res” (transient or resident). Barton takes the elevator up to his room in the enormous palace and as he settles in he is transfixed by a painting of a beautiful woman on the beach looking out at the ocean. The next day he meets with Jack Lipnick (Michael Lerner) Capitol Pictures’ enthusiastic and brazen studio producer (inspired by such luminaries as Jack Warner, Louis B. Mayer and Harry Cohn) who is all fired up about having such a master of the written word penning a script for him. Since Barton’s specialty is stories about the urban working class shmoe, Lipnick chooses a Wallace Beery wrestling picture for him to work his magic into and orders a first draft by the end of the week. 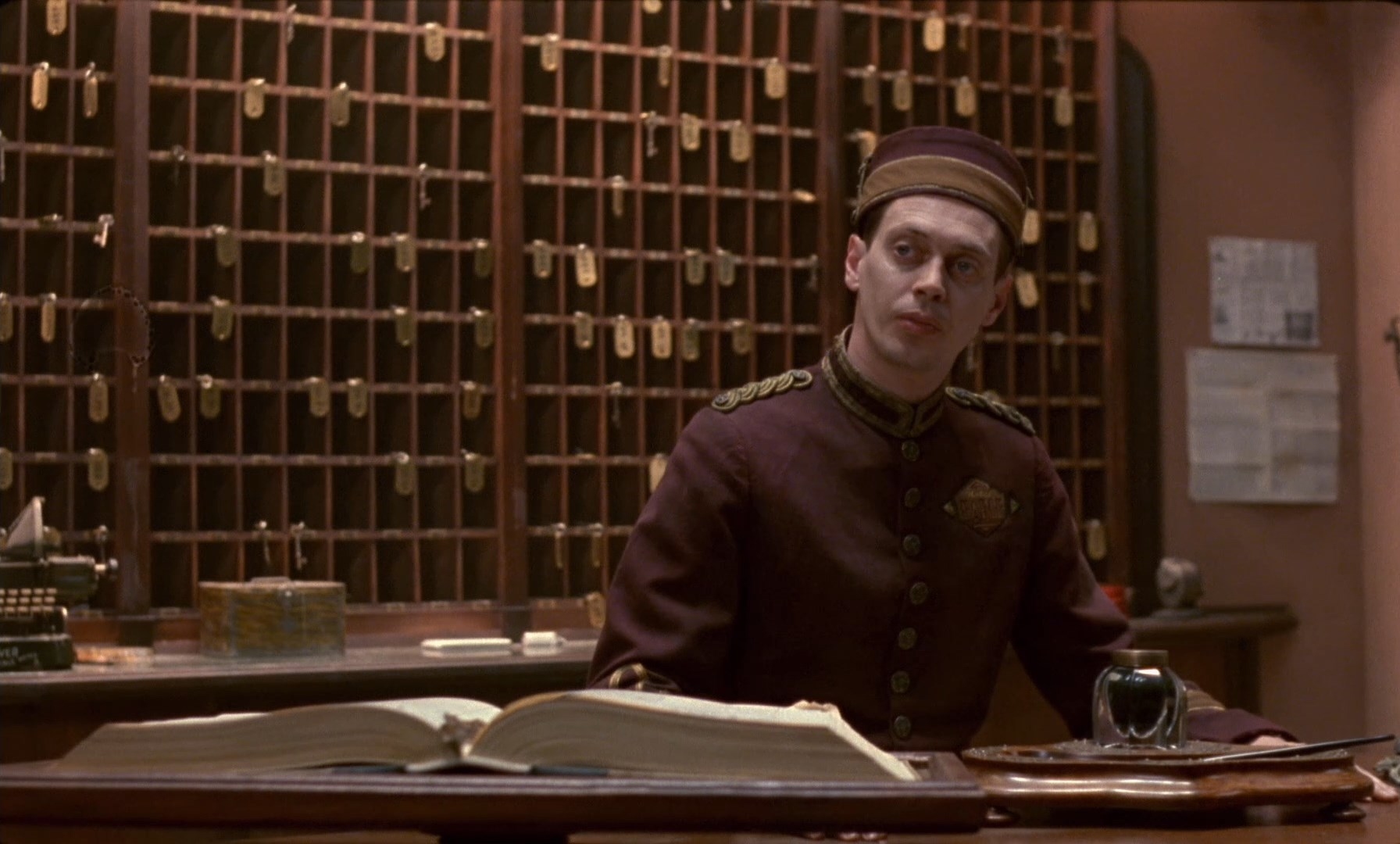 Barton begins to work on the screenplay but his typing is interrupted by a loud laughing coming from the next room. Knowing he cant be creative with the irritating noise he calls Chet at the front desk and complains. After Chet calls the neighbor, Barton hears footsteps coming toward his room. The man who knocks on his door is the rotund Charlie Meadows (John Goodman) a salesman whose been staying at the hotel on business. Charlie is a talkative, friendly soul and offers Barton a drink to break the ice. The two get to know each other and Charlie explains his views on life while Barton tries to bring Charlie into his world of being a writer. He speaks at length, conveying his excitement for the kind of theater he wants to create for the average joes, focusing on the dramas of everyday life instead of fake, pretentious tales noone can relate to. 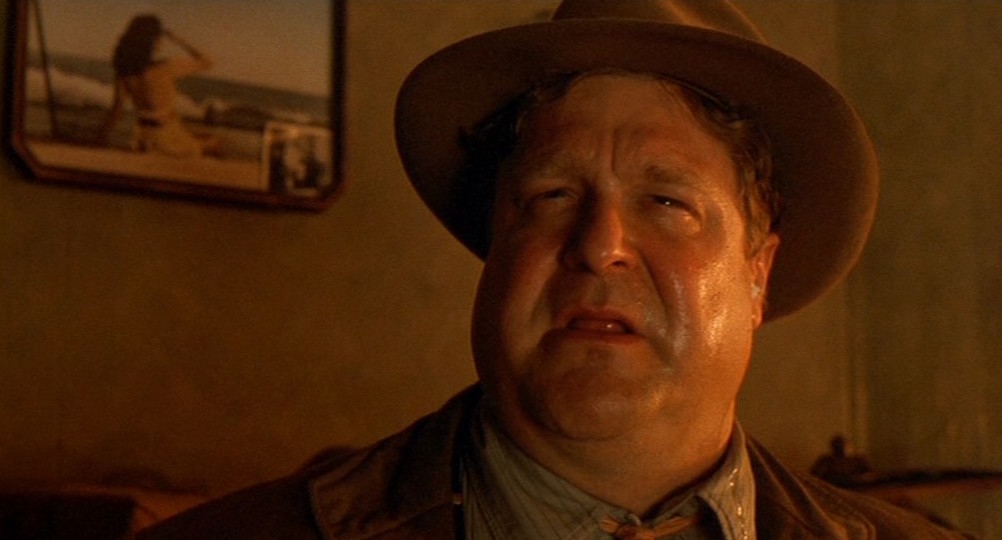 Fink next meets with producer Ben Geisler (Tony Shaloub) a fast talking shyster who he seeks council from since he’s got a bad case of writers block. The two go out to lunch and Geisler recommends Barton seek out another writer to get his ideas flowing. While in the lavatory, Barton overhears a man wretching in the stall and after burping and spitting himself awhile, the man appears and turns out to be none other than W.P. “Bill” Mayhew (John Mahoney) a famed novelist (patterned after William Faulkner). Barton happens to be a huge fan of Mayhew’s work, but didn’t expect a lush and nasty person like him to be the creator of such beautiful art. Barton inquires if Mayhew has worked on wrestling pictures before and Bill says he has but wants to get back to drinking. He instead invites Barton to stop by his bungelow later that afternoon for more conversation. When Barton arrives, Mayhew’s personal secretary and lover Audrey (Judy Davis) greets him at the door while Bill can be heard drunkenly ranting loudly inside. She seems like a kind person and tells Barton that they’ll all get together at a better time. Barton meets Audrey and Bill at a local park for a picnic where they eat fried chicken and talk about writing. Barton becomes annoyed at Bill for being such a drunkard and reprimands him for taking his “gift” of for granted. Bill seems uninterested as he begins getting drunk and after micterating near a tree, slaps Audrey then aimlessly walks down the road, bottle in hand singing the folk song “Old Black Joe”. 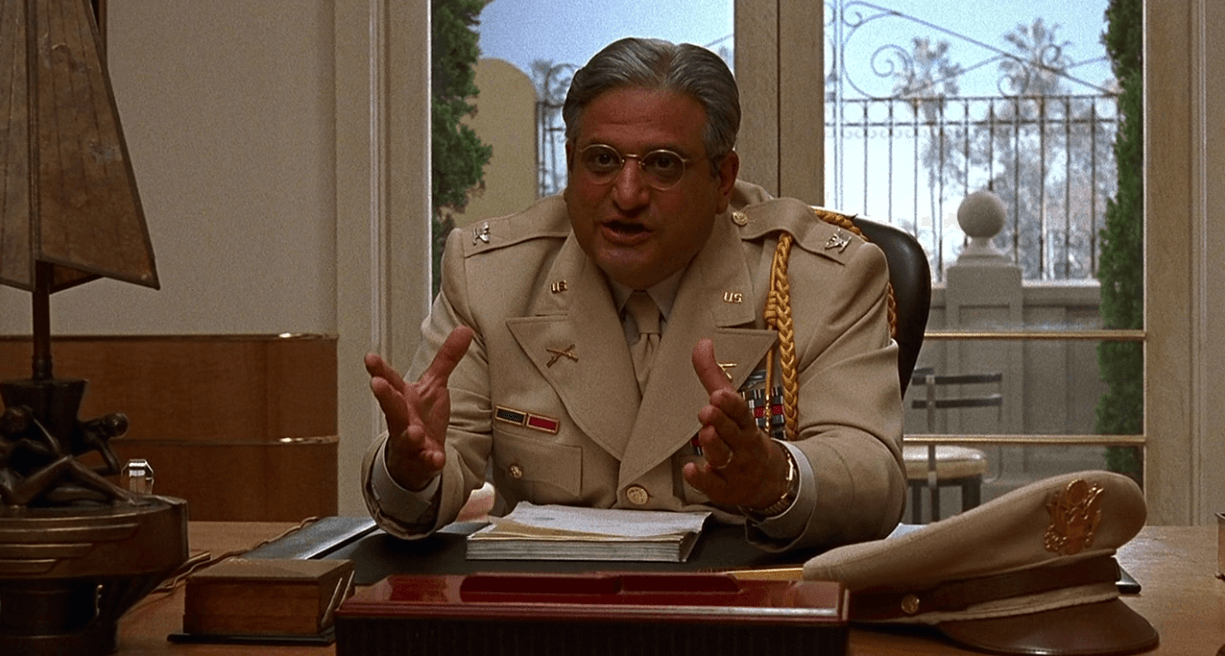 When Charlie suddenly announces he’s got to travel back to his main office in New York, Barton gives him his parents address just in case he needs a home cooked meal. Barton then meets with Geisler again still in need of help to get started and Geisler sends him off to see some other wrestling pictures before he has to goto see Lipnick. Barton phones Audrey looking for one last chance at some inspiration. When she arrives the two make love, but when Barton awakes the next morning he discovers her lying next to him dead in a pool of blood. In a state of panic, he tells Charlie what’s happened and that he didn’t do it. Charlie assures Barton he’ll help him out and tells him not to contact the police and that he’ll get rid of the body if Barton keeps a package for him in return. Soon after the incident, Barton is visited by two policemen who inform him his pal Charlie is actually a mass murderer whose real name is Karl “Madman” Mundt and known for blasting folks with a shotgun and decapitating them. This news, while shocking, helps trigger Barton’s imagination once again and he finishes his script very quickly. He celebrates his return by hitting a dance hall and going batso on the floor. His joy is soon turned to dissapointment when after showing Jack Lipnick his wonderful wrestling film screenplay filled with subtext about life is met with angry resentment from the producer who had previously lauded him, now referring to his artistic piece as a “fruity” tale about suffering. 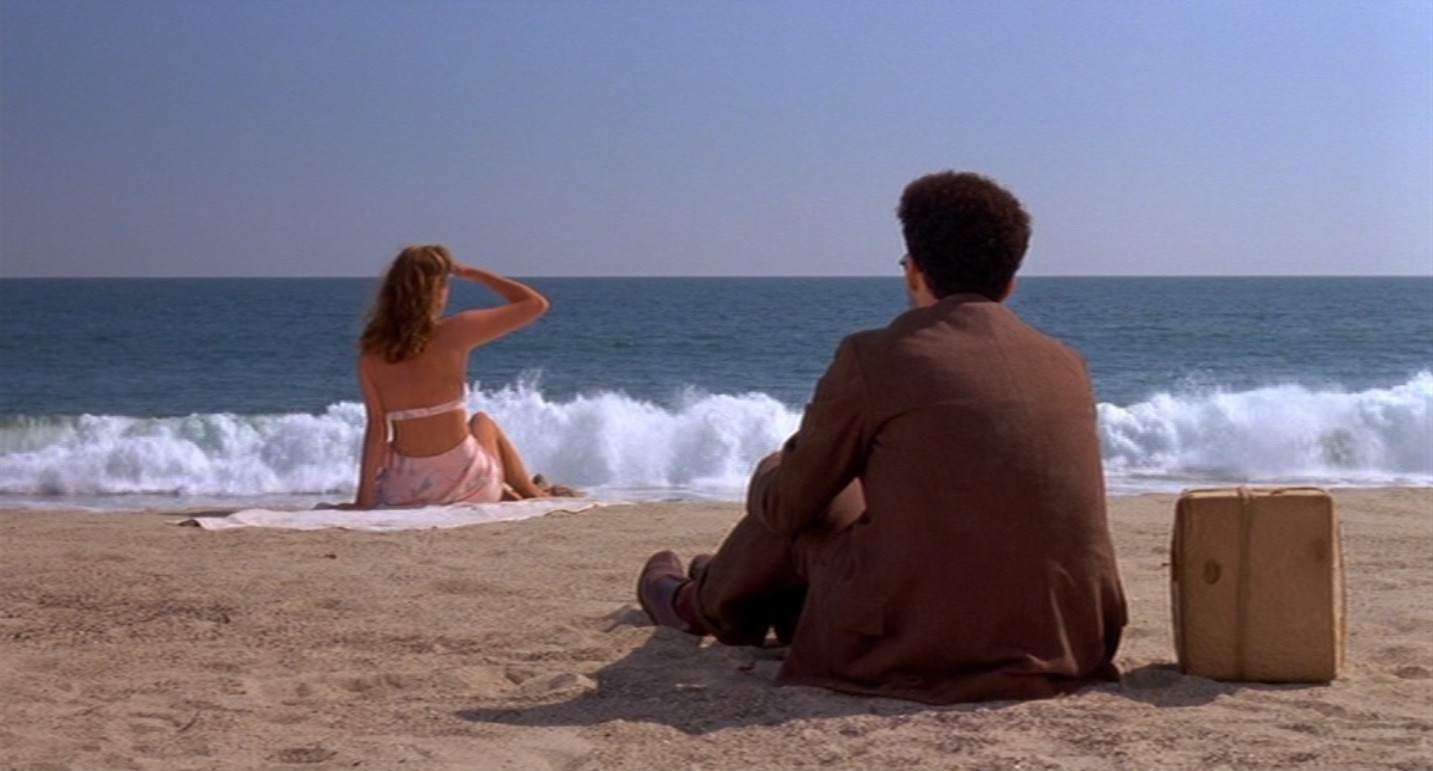 Barton Fink is one of The Coens’ finest works and is dense with subtext and surreal imagery. The film alludes to topics like religion (Book of Daniel, King Nebuchadnezzar, and Bathsheba), slavery and Nazism and contains nods to famous writers like William Shakespeare, John Keats and Flannery O’Connor. On the cinematic level it was heavily inspired by a wide range of classic thrillers dealing with psychosis, hotels and confinement including Roman Polanski’s Repulsion (1965) and The Tenant (1976), as well as Kubrick’s The Shining (1980). It also has roots in Preston Sturges’ Sullivan’s Travels (1941) about a comedy film director who wants to produce a serious drama and goes incognito as a hobo to learn more about what makes the regular folk entertained, discovering his comedies were much more important than he realized.