The Friedkin Connection – A Memoir

For over 50 years Director William Friedkin has had his share of highs and lows. While reading his new book The Friedkin Connection – A Memoir, I found myself riveted as if it were a pulp adventure story. The themes that kept resurfacing throughout were his fearlessness and determination to bring his work to fruition. There were also reflective moments in which he described how his own wreckless attitude had caused just as many problems as his worst film failures ever had. For good or bad these traits are essentially what make him the important artist he is. The book he wrote is part confession, lesson and celebration all rolled into one. He was born and grew up in Chicago with an early dream of becoming a baseball player. Of course life takes you down different paths and after high school he found himself working at a TV studio where he began making contacts and developed an interest in the world of entertainment. After seeing Citizen Kane at a theater one afternoon (and watching it 5 times) he had a revelation about becoming a filmmaker like Orson Welles. He soon took his first leap into directing with a documentary about a convicted killer named Paul Crump who he believed was innocent. This production later earned him an award at the 1962 San Francisco Film Festival and gave him even more confidence to follow his dream. With help from his dedicated and shrewd agents he became a working director and was hired to do TV documentaries such as The Bold Men about death defying daredevils. After moving out to Los Angeles he became friends with musician Sonny Bono and got a chance to shoot his first theatrical feature which was called Good Times (1967) starring Sonny and Cher who were major pop stars. This period seemed to be one of his happiest and Bono became someone he truly admired as an artistic genius.

His follow up works would shape his artistry but also help him to realize what kind of director he really wanted to be. The musical comedy The Night They Raided Minskys (1968) wasn’t the right fit while The Birthday Party (1968) was certainly more inspired and a solid effort but the end result was nothing spectacular. The Boys in The Band (1970) about a group of gay men was controversial and groundbreaking. It marked a counter-cultural shift and was a kind of preview of the daring cinema that would come out of Hollywood in the 70s. Everything that he had learned in the business seemed to coalesce with his next project: The French Connection (1971) a New York set crime thriller which was based on true events in the lives of hard boiled police detectives Eddie Egan and Sonny Grosso. The production had its share of tension and trouble due to producers interfering while star Gene Hackman (who delivered an outstanding performance) had his own doubts and conflicts. The movie went on to win Best Picture, Best Director, Best Actor (Hackman), Best Adapted Screenplay and Best Editing. His next film based on a book by William Peter Blatty called The Exorcist (1973) about a demonic possession became an instant hit with audiences. He was at the top of his game and living the high life. With two smash successes to his name another risk didn’t mean much. Inspired by Clouzot’s 1953 French film The Wages of Fear, he next set out to do a remake he called Sorceror (1977). Soon after casting the film (which was originally to star Steve McQueen) and heading to the Dominican Republic the production became plagued by troubles due to the things like weather and drug use on the set. It was later released and was a box office flop but found an appreciation from cineastes who now regard it as a lost masterpiece. The Brink’s Job (1978) brought him to Boston where the crime it was based on took place in 1950. The cast was excellent (Peter Falk, Gena Rowlands, Peter Boyle, Warren Oates) but it only got a mediocre reception and didn’t make much of an impact. No stranger to controversy, Cruising (1980) about murders in the underground gay S & M clubs in New York City was his most daring film up to that time. It also was not a hit and caused a backlash from much of the gay community. It’s now considered a cult classic due to the shocking, taboo subject matter. To Live and Die in L.A. (1985) would take him back to the adrenaline charged action of The French Connection but with an New Wave 80s aesthetic. It turned out to be one of the best movies of his career.

In the 90s Mr. Friedkin tried his hand at directing an opera which was a refreshing and fulfilling experience. He also made a film about basketball (one of his lifelong passions) called Blue Chips (1994) starring Nick Nolte. He delved back into exploring the darker side of the human psyche with the erotic thriller Jade (1995) from a script written by Joe Ezterhaus (Basic Instinct) and worked in TV on a modern version of 12 Angry Men. In the 2000s he shot the war drama Rules of Engagement (2000), the action thriller The Hunted (2003) starring Tommy Lee Jones and Benicio Del Toro and directed two films based on plays by Tracy Letts, a paranoia induced descent into madness called Bug (2006) starring Ashley Judd and Michael Shannon and a Southern Fried, pitch black comedy Killer Joe (2011) starring Matthew McConaughey and Emile Hirsch. For those of us who followed his career and loved his movies these were a return to the audacious and edgy trademark Friedkin cinema that first captured our imaginations. Throughout his life William Friedkin has faced a myriad of career and health problems but when he got knocked down he got right up and continued to work on himself and his art with an open mind. I was honestly inspired by his story. It was profound from an artistic standpoint but also entertaining and funny on many levels because of the outrageous situations and colorful characters he encountered on his journeys. I’d highly recommend this book to both movie buffs and artists in general. It’s a candid, no frills look at the life of one of our great American filmmakers that’s been to the top and the bottom of the Hollywood rollercoaster and is still thrilling audiences with his own unique brand of cinema.

Special Thanks to Stephanie Selah at Harper-Collins 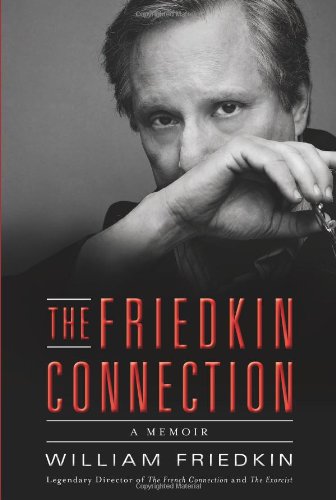