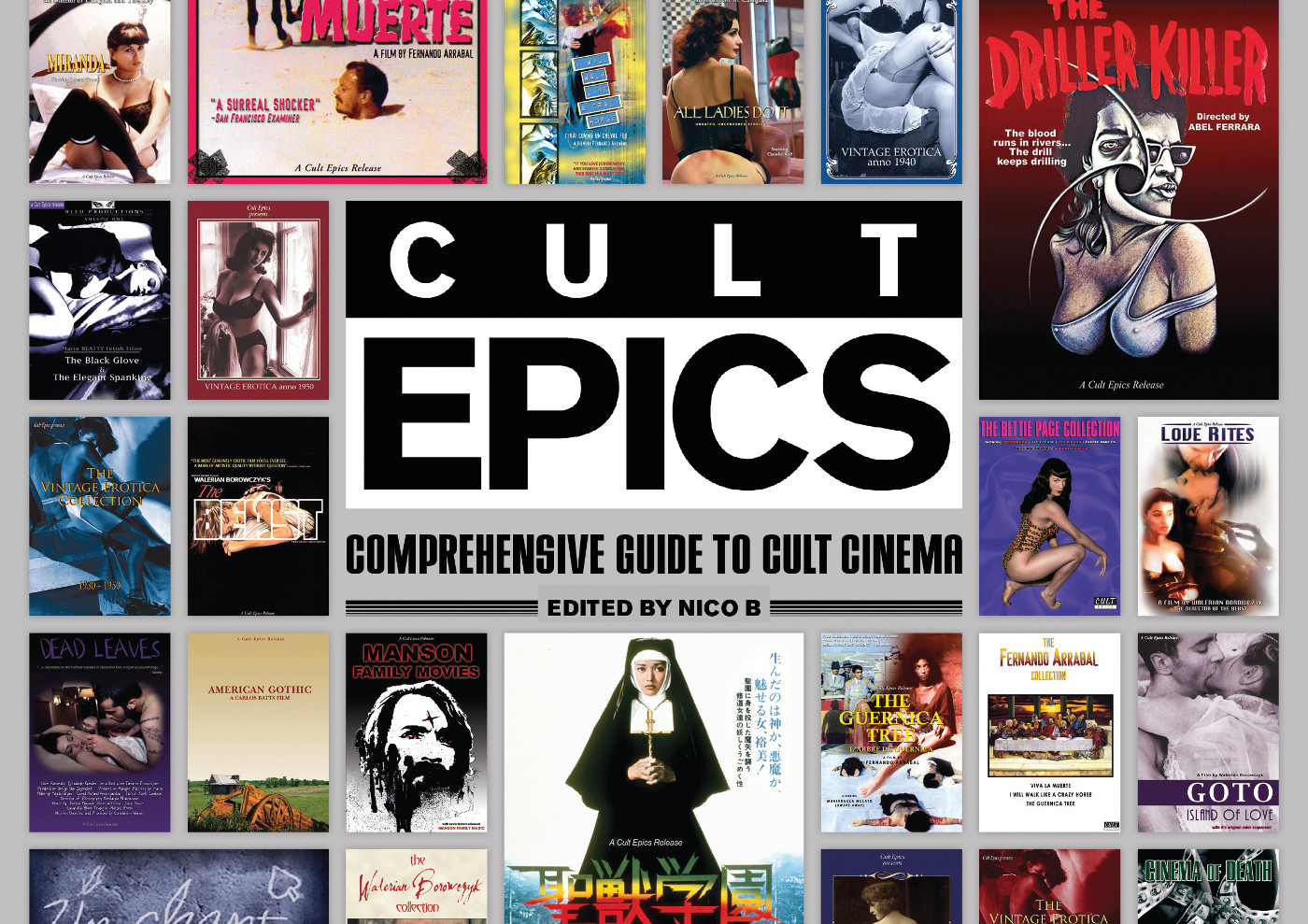 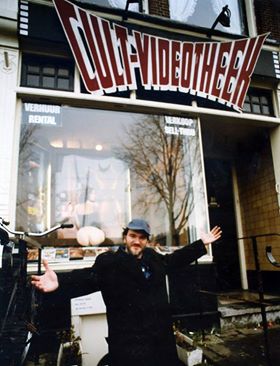 Once upon a time, long before HBO, streaming and BluRay there was one of the world’s coolest video stores, the CULT VIDEOTHEEK founded in the late 1980s in Amsterdam. The store was such a pioneer in hunting down and stocking rare and international goodies, often directly from directors such as John Woo way before he became known in the west, even Quentin Tarantino was among its card-carrying members while living there writing Pulp Fiction (rumors have it he owes huge overtime fees still). Its founder Nico Bruinsma has emigrated to LA a long while ago and started the boutique label Cult Epics (www.cultepics.com) as well as producing some films of his own. This year among other things he is releasing the bulk of acclaimed Dutch filmmaker Pim de la Parra‘s work in the US for the first time. If you’re not familiar with the director it’s about time. 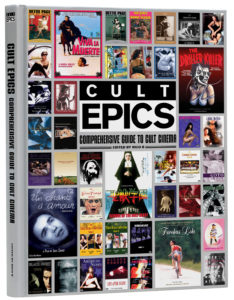 After a successful Indigogo campaign, which offered a way to also get some pretty delightful perks, his new book Cult Epics: Comprehensive Guide to Cult Cinema was released in February. Drawing on his extensive licensing catalogue of his own and the help of about 18 contributors, this hard cover book contains about 255 pages of goodies, with color photos, great background info, interviews and details on movies from rare arthouse flicks to vintage erotica, reviews and background. There release was accompanied by a book release & signing in Los Angeles and Cult Epics Marathon screenings across the country to celebrate 25 years of Cult Epics best releases, see press news below.

We had the chance at an early pre-release look at the book, but weren’t able to read it in time to get you a pre-release review, so here’s a much delayed but well deserved verdict – and needless to say, the book is damn fantastic. It’s a great coffee table goodie, but also a work for research, a starting point for discoveries and just something to marvel at.

First of all, if you got the crowdfunding version your book will most likely come with a trailer reel DVD that will get you all excited for a wild wild world of furious cinema. You can use it to accompany your reading or just let it inspire you. The book is structured along some main and sub-chapters, those being Arthouse esp. Fernando Arrabal (Viva la muerte), Walerian Borowczyk (The Beast), Horror (from The Driller Killer to Angst) esp. Joerg Buttgereit (Nekromantik), Erotica (Venus in Furs), Bettie Page (more than just the pinup cabaret image), Vintage Erotica (from the 20s to the 70s and more), Tinto Brass (Salon Kitty) and Radley Metzger (Camille 2000). Rounding it off is a chapter on Nico’s work, who also provides a neat intro to the book. You’ll also find the complete Cult Epics catalog and a list of contributors to the book. One of the more recent releases is the giallo Death Laid an Egg.

Nico’s book is both a highly personal journey through his work as a distributor and aficionado and at the same time a tour-de-force of independent and niche cinema from a perspective that isn’t all that common in today’s world of movie blogs and Bluray collectors. Nico is one of the pioneers of making rare films accessible to thousands, he started in a time even before mainstream VHS distribution. Today you can get almost any rare film on expensive collector’s discs, but on your evening journey through the thinned out Netflix watchlists of your family, to what lengths are you willing to go to acquire that long lost version of a rare classic some buddy told you about? Welcome to the world of Cult Epics.

It goes without saying that this book has absolute coffee table class, with an abundance of great pictures, advertising art and cover designs. From the first pages the book will probably unmask you as only half the cineaste you really are, but if you’re like me you’ll have some movie tracking tool open and you’re putting all the titles on your watch- or shopping list. Early works of famous artists, rare import versions, long banned or criminally overlooked gems, bare breasted Kinskis or Birkins, political satire, torture and obscenity, it’s all there for you to discover. Full page color artwork, in-depth liner notes or reviews and data sheets for DVD and BluRay releases go hand in hand in this journey through Nico’s lineup. You can read the book very selectively, and let Nathaniel Thompson point you to a family-friendly Arrabal movie starring Mickey Rooney. Or read about the much vaunted School of the Holy Beast, which I stored from a VOD broadcast two years ago and still haven’t watched. It’s closing in on me, however, I can feel it. You got your vintage 1930s erotica, some 70s German sex flicks, a must-read introduction and extensive interviews with Tinto Brass, and so much more. And no, the book isn’t safe for work, but that depends on where you work.

Whether you’re just a hobby film scholar or overall enthusiast like we are, or you’re an actual historian or just dig great cult films, this book is for you. Obviously all or most titles are also distributed by Nico through his label in the US, but hey, it’s pretty much in everybody’s interest these rare flicks see the light of day so as much as you can, support such labels. The book is available throughout, and if you want to not only support Nico’s project but also this project, get the book by using these Amazon links: 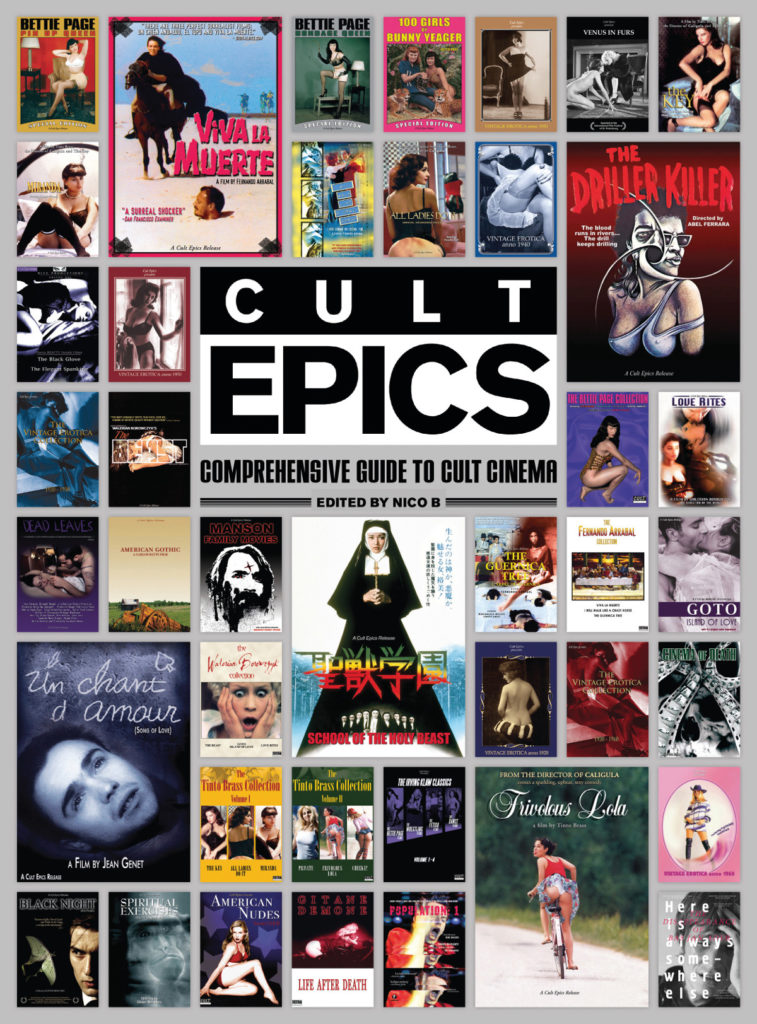 For Immediate Press release. For 25 years, Cult Epics has distributed the most sought-after, obscure, provocative and previously unknown films to the home video market. To commemorate this anniversary we have produced a book on all the films and its directors.

Special thanks to Nico.