While watching one of my all time favorite films this past week, Robert Zemeckis’ 1980 screwball classic auto-comedy USED CARS, I discovered a connection. It wasn’t with another film that has a similar theme but something else I’ve been thinking a lot about, specifically what’s currently going on in the movie industry regarding all the 3D and higher frame rate speed hucksterism. It seems that these various gimmicks (for lack of a better word) generally don’t have a lot to do with being a fan of cinema but with distracting people from realizing the true motive behind it all which is to get them to fork over more money. That brings us to USED CARS a nice representation of the subject set inside another business: automotive sales. It is a rollicking story about shysters and flim flammers who use any means they can to get through the obstacles which are set in front of them. I always loved that aspect of the movie in particular, the whole “sell it any way you can” point of view. Even if the car needs 20 different mechanics to fix it up or the engine explodes as the new owner drives away, just get the money from them. I think you can see where I’m going with this. 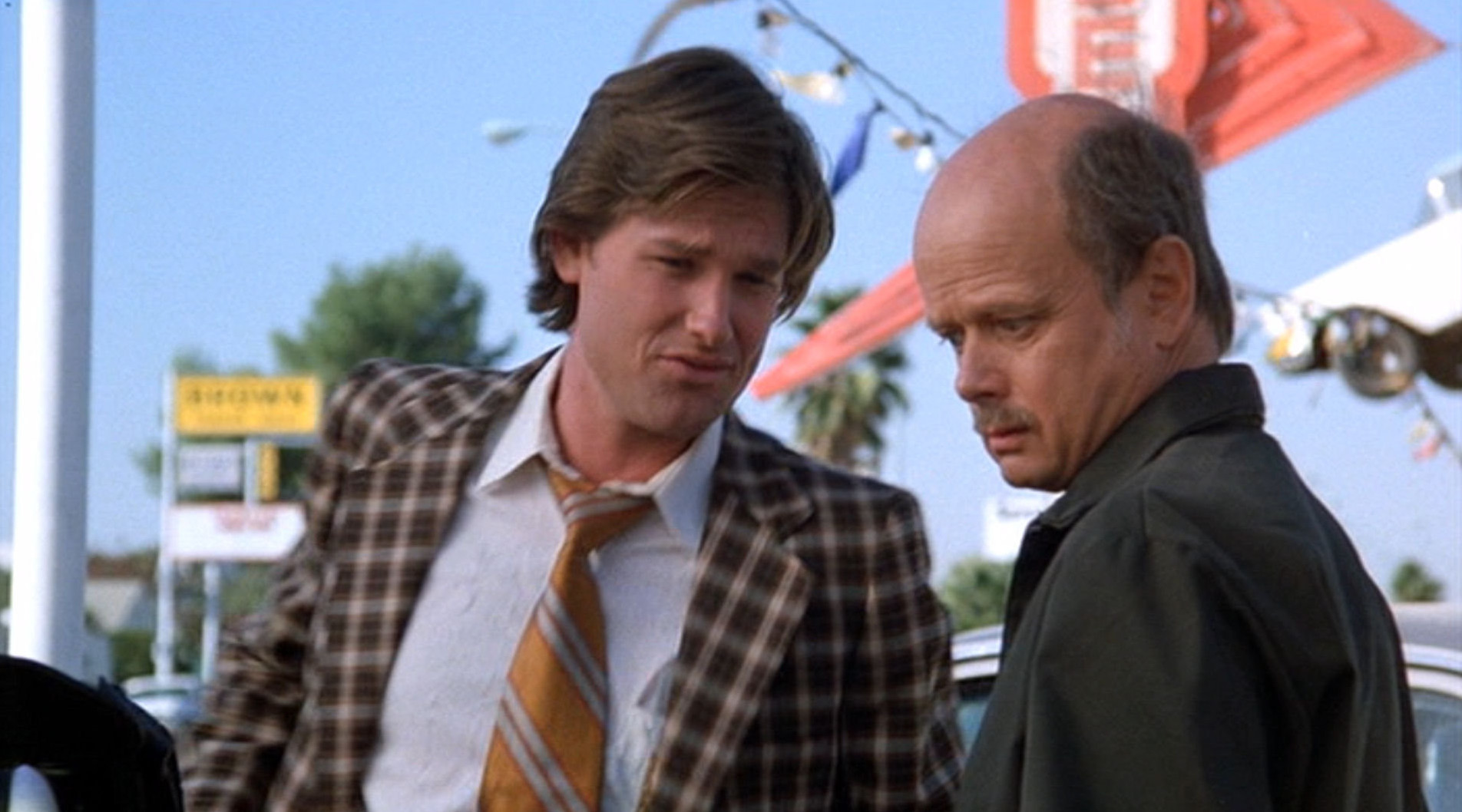 Kurt Russell plays Rudy Russo, the epitome of a what you expect a used car salesman to be. He talks fast, thinks fast and always has an angle. He also knows the cars he’s selling are complete pieces of junk, but he does his best to cover up all their damages. At one point he even uses some chewing gum to keep a bumper stuck on. Rudy’s boss is the kind old Luke Fuchs (Jack Warden) who has an ongoing battle with his twin brother Roy L. (also Warden) a real bastard. The two happen to own car dealerships across the street from one another. While Roy’s business is doing quite well, Luke is barely getting by at New Deal (the name of his lot) which is filled with clunkers. The only way he can make any moulah is through Rudy and his co-worker Jeff’s (Gerrit Graham) wheeling and dealing, but it’s apparent that its hardly working. In one hilarious scene Rudy goes so far as to use a fishing pole with money pinned on a hook to lure a potential buyer over from Roy L’s lot. Rudy also has his own dreams of running for public senate, which is perfect because like most politicians he’s an ace at tricking people into believing him! He even convinces Luke to invest $10,000 for his political campaign in exchange for keeping New Deal going. 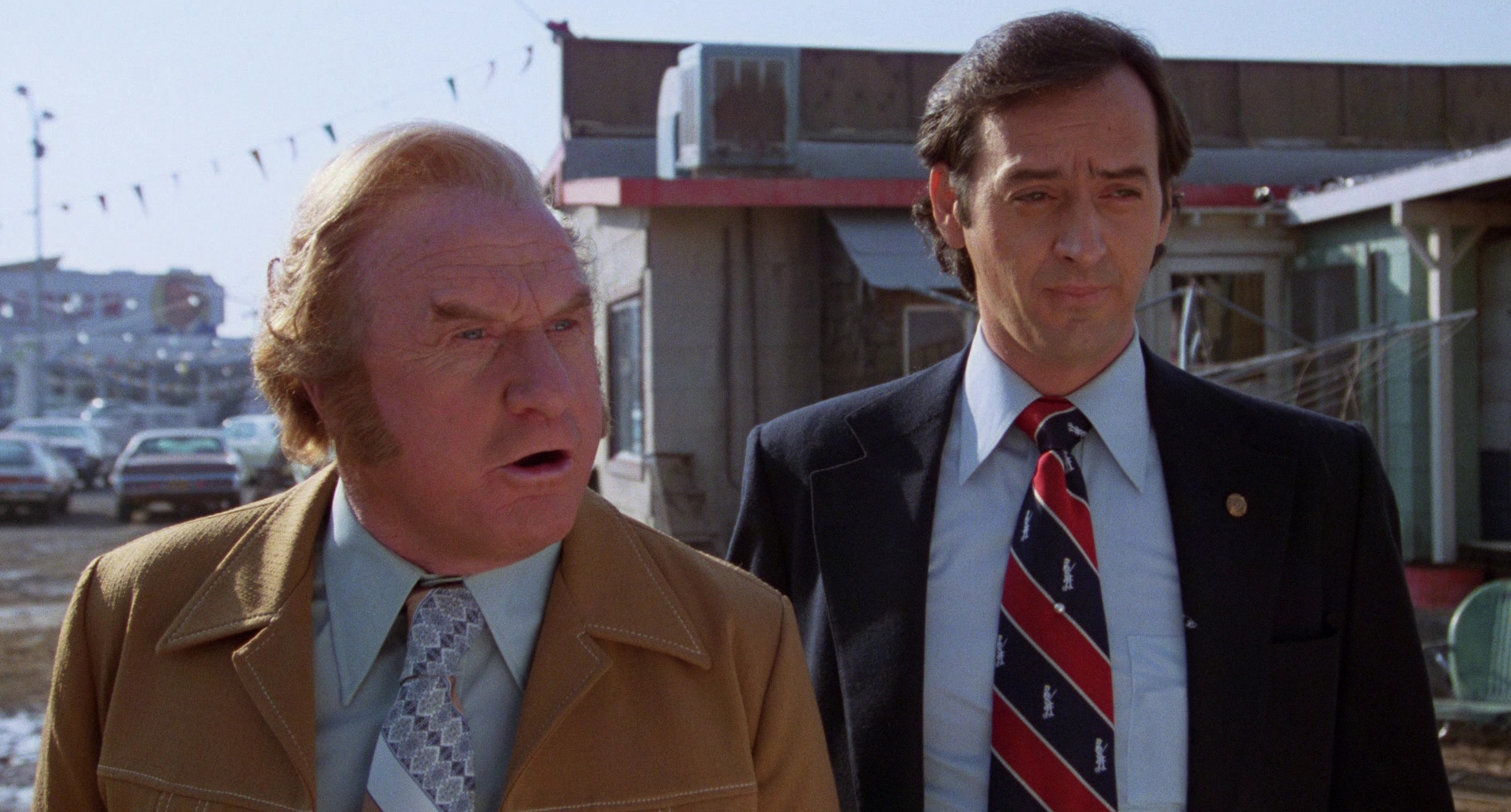 When Roy L. is suddenly notified that the city is planning to put a highway overpass right through his property, he has to figure out some way to stay in business. He comes up with a cruel plan: to give his own brother Luke a heart attack since he thinks he’s next of kin in the business trust. Roy L. sends an ex-demolition derby driver (Michael Talbott) over to New Deal to act as a potential buyer. He gets Luke to go with him on a test drive which turns out to be a car ride from hell as the guy races the vehicle up and down the street, crashing into barriers thus re-triggering Luke’s ongoing heart problem. Tragically Luke dies afterwards, leaving a shocked Rudy, Jeff (who’s obsessed with having bad luck) and New Deal’s mechanic Jim (Frank McRae) to try to cover up his death by telling Roy L that Luke flew to Miami the previous night. Roy L. remains suspicious about this claim as the guys do their best to keep New Deal open. They even go so far as to bury Luke in an old car right in the yard in the meantime. 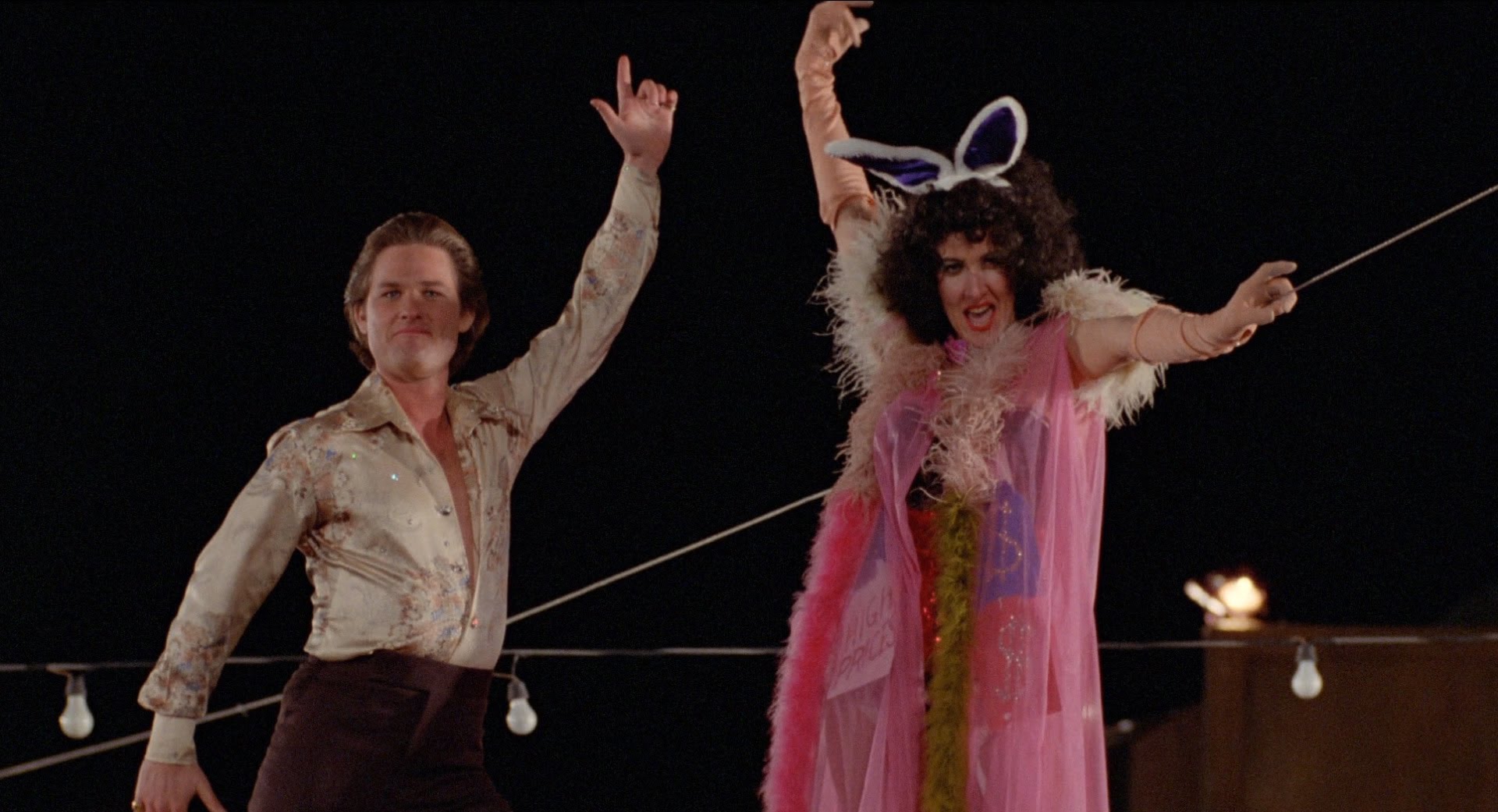 Due to Luke’s sudden passing and Rudy’s need for campaign financing, he and the guys must pull a variety of slippery scams to get folks to come to the lot. Their main strategy is bringing in two of their tech guru buddies Freddie Paris (David L. Lander) and Eddie Winslow (Michael McKean) to film hysterically funny TV commercials placed over important broadcasts such as football games and Presidential addresses. This ploy actually works beautifully, and through their desperate methods they seem to be succeeding. Things get slightly more complicated when Luke’s estranged daughter Barbara (Deborah Harmon) abruptly shows up looking for him. That adds yet another person they must keep in the dark. Soon after meeting, Rudy falls in love with the kind, tenderhearted Barbara and the two begin a relationship. Meanwhile, Roy L. has a video expert edit a New Deal commercial featuring her. They alter the audio so she’s proclaiming they have a full mile of cars on the lot. This false advertising is just what Roy L needs so he can take New Deal to court (theres a gem of a cameo with The Munsters’ Al Lewis as the judge). Rudy, ever the quick thinker, figures out a way to get the vehicles they need to win the court case. He uses his senate race investment to pay for 250 cars owned by his Mexican pal/dealer Manuel (Alphonso Arau). Rudy next calls up Mr. Chartner (Woodrow Parfrey) a driving instructor he was previously selling some cars to, to bring his students down to drive them all back to the lot. 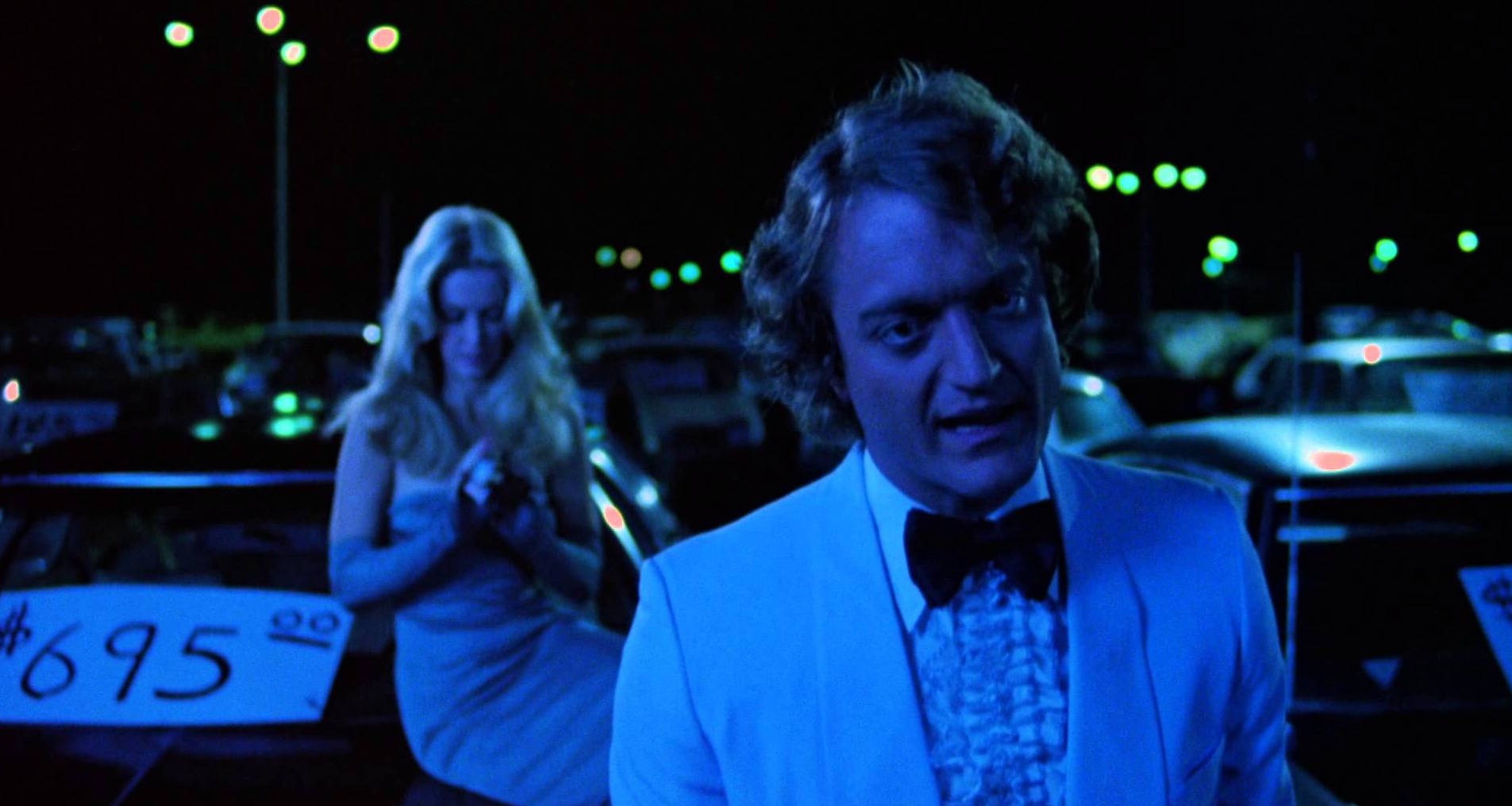 Robert Zemeckis and Bob Gale’s brilliant script features crackling dialogue and sidesplitting gags. The actors are all on point delivering memorable comedic performances that are so full of energy and high falutin humor. I’ve read different comments about how this film seems to mix too many things into the pot at once, but I disagree. Sure, Used Cars on first viewing may seem to bombard you with a lot of simultaneous information, but it not only gets clearer each time you watch it, it gets better as well.

In closing I just wanted to reiterate my initial thoughts about how I feel this film relates to what goes on in Hollywood. As much as I love the characters like Rudy and his gang and are on their side throughout the film, when it comes to this New Deal version of Cinema going on presently with various filmmakers (I won’t mention any names) specifically making money from doing BAD remakes, using modern technology as a guise for their cash schemes etc, I refuse to support it. I simply feel artists should at least do honest work and not simply use classic cinema as fodder to make more money. Thats not what real art is about. Furious Cinema was initially started because we felt a need to address things like this. We will continue to voice our opinions on these various matters (whether or not people agree or want to hear it) simply because we care and it is our right to do so.

Even though a Region A release is on its way, currently the only available BluRay is the English-friendly German release: Amazon.com | Amazon.co.uk | Amazon.de