The Lift vs Down

The latest releases from cult home video label Blue Underground is a pair of films made by the same director, Dick Maas (Amsterdamned). One is his Dutch original shocker The Lift (De Lift, 1983)the other is his bigger budget US remake called Down. (also known as The Shaft, 2001). I’m looking into both BluRays and films, in one article. 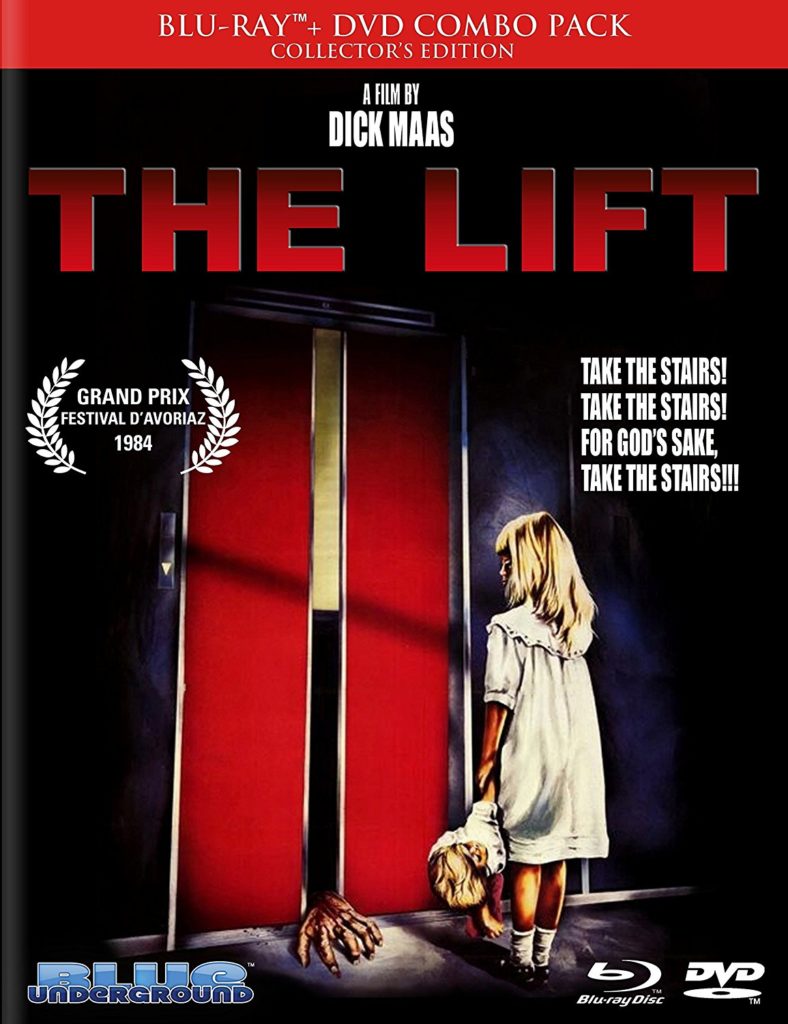 Elevator repair guy Felix (Huub Stapel) gets called to a 15 story office building, where some party guests were found suffocated by the air condition. His analysis reveals no malfunctions. Yet, more people die. He starts suspecting foul play on the electronics side of the elevator installation, run by an IT conglomerate. Motivated by a journalist, they start investigating, while meanwhile the bodies start piling up and the police are looking for an easy out to close the investigation.

I was surprised how little splatter or gore there was in the film. It really is a rather low budget shocker, but it doesn’t pull out all stops, it’s more subtle, and it tries to build a complex story before it unleashes bit after bit of mayhem. There are a few gruesome deaths, but overall The Lift is a rather tame affair. Unlike Amsterdamned, which turns into a high-adrenaline action thriller, The Lift is a potpoiler that …keeps on boiling. Yet just the same, it’s a movie where a misappropriation of genre features becomes the most entertaining aspect. This time there’s no living killer at all, no animal, no human, no leather clad slasher – but a piece of technology.

Dick Maas turned a vague fear of electronics or digital technology into a thriller that plays as much with our scepticism towards scary technology like elevators as it does with society’s eerie feeling of no longer being in control of everything digital. Add to it a dose of 80s conspiracy theory and – do I see a nod to Die Hard here – scruffy tough guy in an elevator shaft, and an evening’s entertainment is perfect. The Lift kills off a few folks spectacularly, and it moves on from revelation to revelation, all the while becoming more and more of a political thriller or detective story without forgetting its “star”. 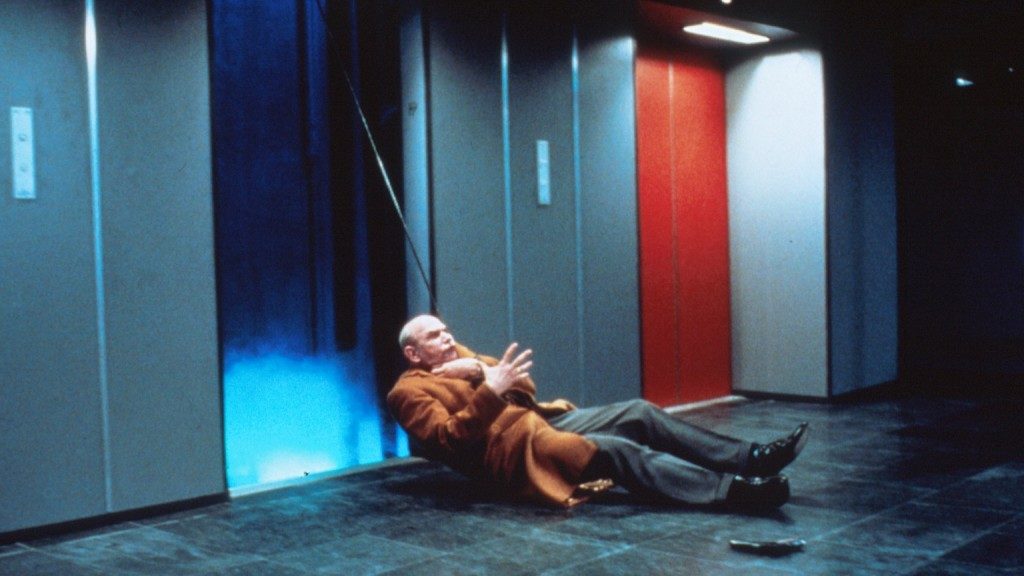 Viewers should have tons of fun with this one. I enjoyed the blending of genres, the funny kills and the creative filmmaking employed here. Looking forward to experiencing the remake next.

The BluRay presents the movie in a very nice looking 1.78:1 widescreen 1080p HD transfer overseen by the director, a 2K scan like the other titles he is releasing at Blue Underground. The image looks great, but reveals some weaknesses in the darker moments and could do with some more sharpness in some spots but is overall an excellent picture. In terms of audio (all DTS-HD) you get both a Dutch 2.0 and a 5.1 track, plus an English dub 2.0. Englisch SDH subtitles and separate Subtitles for the Dutch audio. Spanish subtitles are also included.

The release also includes a DVD version of the film. The booklet contains excellent liner notes by Chris Alexander, who among other things goes into the inspiration for The Lift and how that film translated into Down. He’s clearly and admirer who reminisces as he is analyzing. Then there is a few more extras. First and foremost there is the audio commentary with Dick Maas, editor Hans van Dongen and David Gregory as moderator. It is highly informative and goes into the inspirations and the making of the film. I don’t think it’s the most entertaining audio commentary, but somewhere in the middle they find their flow a bit but overall it’s a subtle commentary (but informative). Then there’s the featurette “Going up” with Huub Stapel (9mins) which looks like it was filmed along with the interviews he also did for Amsterdamned (they’re Huub’s boat through Amsterdam). Also included is a creepy short film from 2003 (4mins, in HD, English subtitles) called Long Distance that Maas made as well as some trailers and poster and still gallery 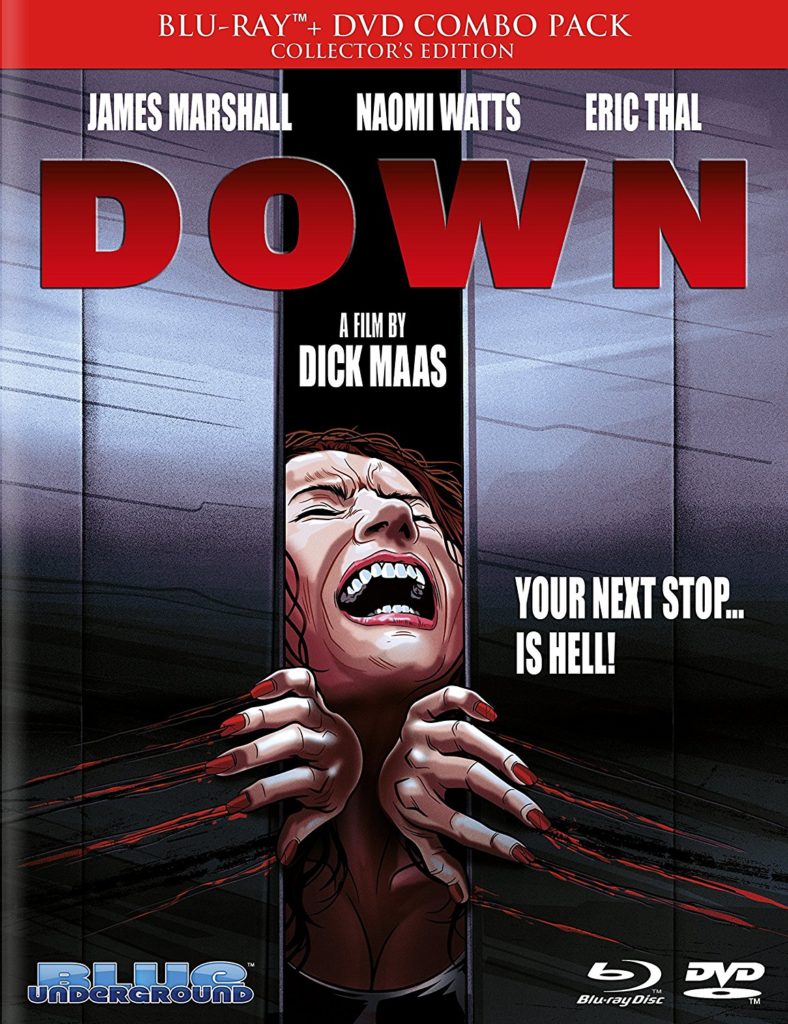 The Millenium Building in New York City, a monstrosity with various high-tech elevators, gets struck by lightning. The technology starts to fail, there are incidents. As a group of yoga mums get stuck in the elevator and some of them give birth in there, Jennifer Evans (Naomi Watts), who works for a local tabloid, gets called in smelling a juicy story. Technicians Mark (James Marshall) and Jeff are called in to investigate – very soon just Mark is left, teaming up with Jennifer to she some light on the creepy vertical killing machine and the corporate interests at play. While the police are ready to treat whatever is happening in the building as a terrorist threat, the two unlikely heroes discover a frightening secret behind the elevator’s control mechanisms.

Part of the movie is an exact copy of The Lift, part of it is deviating a bit from the original recipe. For example, it’s now a team of elevator technicians. As with the original, the effort at explaining the installation’s “behavior” is what makes the film seem ridiculous. Down is a bit more plausible to some extent, but in general it’s just as far fetched as The Lift. Some things are best left unexplained for maximum impact.

The cast is a wee bit more impressive. While James Marshall‘s career has never quite escaped the 90s (I had to look him up, I thought he was Peter Greene‘s brother), Naomi Watts (Mullholland Dr), Michael Ironside (Starship Troopers), Dan Hedaya and Ron Perlman (Hellboy) add a nice touch to this story. The conspiracy angle is the less interesting aspect, as I wrote above, I believe it should’ve been more of a horror mystery movie than a conspiracy. However, where Down beats The Lift, is in the showdown. Whereas The Lift goes full chips and goo, Down brings out the big guns and casts the conspiracy and computer chips stuff aside. And that works wonders, because it’s Hollywood. Down stays exciting, not all that serious, with some harsh moments, a few interesting one-lines, but overall is really just a variation of the original. I don’t think it’s better, I don’t think it’s worse. 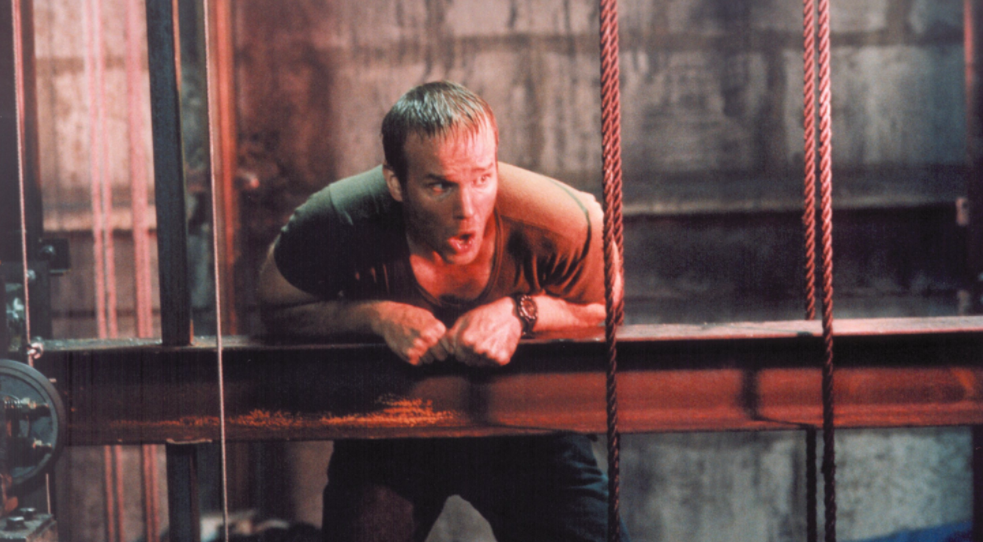 The picture of the BluRay looks pretty damn great and leaves little room for complaint. In terms of audio, there’s an English DTS-HD 5.1 track as well as a Dolby Stereo track, the same two for French. The track (English, both tested) sounds convincing, even though the full potential isn’t quite fulfilled. Overall a very solid technical presentation of this classic. Subtitles in English and Spanish.

The release includes a DVD version as well. The booklet text by BU regular Michael Gingold does an excellent job outlining the path to Down and the complicated context of the film. Really interesting here as well are the set of extras that come with the disc: For one, the audio commentary with Dick Maas, stunt coordinator Willem de Beukelaer and David Gregory as moderator. I think this commentary is a lot more entertaining than the one on The Lift, and is overall very informative. There are two featurettes on this disc, one is an actual making of (9mins), which is quite interesting in its detail as it goes past the usual soundbites and movie scenes, the other is – drumroll – 151 minutes of rough behind-the-scenes footage (not a typo). It almost feels like a production diary, but without any narration or anything its value is less than it could’ve been. It’s over two hours of camcorder material, something for hardcore fans. Then there’s a few trailers and poster and still galleries.

Oh boy, what a double. Clearly, whether you’re a fan of Dutch cinema, or horror flicks or just dig crazy genre cinema, this will be for you. Neither of the two movies have aged particularly well, but The Lift is a landmark classic that can’t be missed. If I had to pick, I’d say the original is the better movie, as the director’s own remake doesn’t add so much more to the concept the second time around. Down is still great entertainment and an interesting twist to the original. Historically speaking also an extremely ominous movie in hindsight. Blue Underground has done an excellent job with these two releases, and teaming up with Dick Maas for these great extras is a godsend (same goes for Amsterdamned). Two top notch releases of two highly entertaining flicks, both furious in their own right.