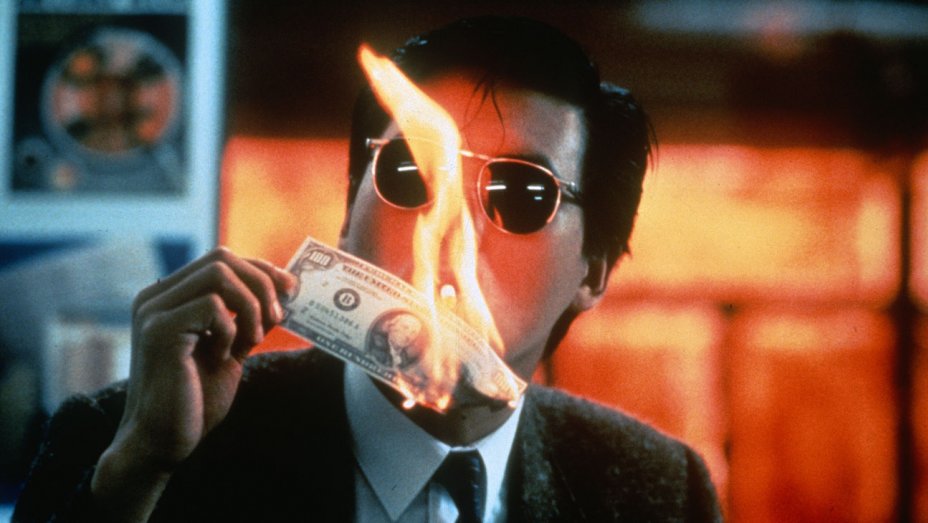 When you think of Hong Kong movies of times past, John Woo‘s bullet opera classics feature rather prominently. Aside from Shaw Brothers martial arts films and Bruce Lee, his films have been among the most influential pieces of Asian cinema – as much as they were themselves highly influenced by other cinema in turn. John Woo‘s Better Tomorrow Trilogy is a yardstick for action movies, and the way these films have been treated over the decades by distribution companies the world over, have also contributed to the notoriety of them. Today you’d find it hard to get your hands on a flawless presentation of these classics on Amazon.com or Amazon DE or on Amazon UK, or anywhere else for that matter. John Woo’s movies have been cut, badly dubbed, soundtrack music switched out, subtitles have been known to be based on dubs, and to this day there’s nothing that comes even close to the original theatrical exhibition. Recent restoration efforts in Hong Kong have resulted in a rather decent BluRay of the first instalment of the Better Tomorrow Trilogy, but the situation of his movies, and those of his colleagues, from that era of Hong Kong, is still dire. Archival material has been lost, film prints destroyed, rights changed hands too many times. By all means, as fans we need to do our best to signal continued interest in that chapter of film history….

A milestone movie in Hong Kong cinema, the beginning of the so-called ‘bloodshed genre’: ultra-violent, melodramatic crime thrillers with an incredibly high body count and blood flowing like wine (or spurting like geysers). It tells the story of two brothers, Tse-Kit and Tse-Ho, the first one a cop, the other one working for a counterfeit ring, who fall out after the death of their father. The counterfeit brother ends up in jail after being double-crossed, but he’s avenged by a gangland friend, Mark, who is shot in the leg during the settling of the accounts and becomes a cripple. Eventually the three will team up to face the evil incarnate.

John Woo established himself as Hong Kong’s leading action and Chow Yun-Fat‘s performance as the crippled avenger turned out to be trendsetting. As more often is the case, there’s too much melodrama to make the drama work (and some of the comic relief is laughably inadequate), but John Woo‘s balletic bloodbaths are hypnotizing; the dinner assassination scene, with Chow Yun-Fat pulling guns on his way out from potted plants (where he had hidden them on his way in) is one of the most influential action sequence in the history of Hong Kong film making. In 2010 the film was remade in Korea (under the title Mujeokja); John Woo acted as producer of the remake, another one is going to be released in 2018, called A Better Tomorrow 2018. 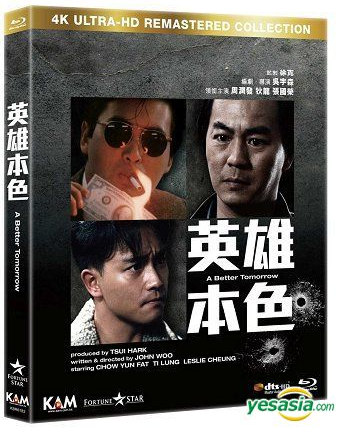 There is a restoration by Kam & Ronson available from Hong Kong on the Fortune Star label, which is a regular BluRay even though advertised as “4K Ultra-HD” remastered series. It’s supposedly the best version available globally at this point, and you can a) order it HERE from YesAsia. Around the world, John Woo movies are having a hard time on home video, partially to blame is the HK film industry’s horrible short-livedness and bad treatment of archival material. b) You can also order it HERE from Play-Asia or try your luck with some other international releases of this classic on DVD, BluRay and streaming for example here on Amazon.com or on Amazon UK or Amazon DE. 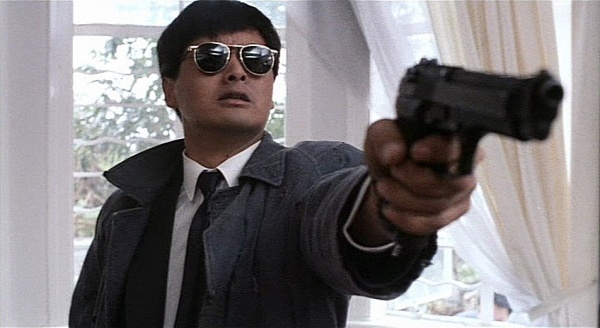 The first sequel to the trendsetting A Better Tomorrow by the same director (John Woo) and producer (Tsui Hark). Tse-Ho, the criminal brother from the first movie, is offered parole but – in return – asked to infiltrate the gang of his former mentor Lung. He refuses but then discovers that his younger brother Tse-Kit, a police officer, is working undercover on the same case. The two decide to work together, but then Lung is dethroned by his sadistic right-hand man Ko, who asks Ho to execute Kit …

Woo and Hark co-wrote the script, but allegedly had several disagreements. Hark wanted to focus more on the Lung character, Woo wanted to stay with the brothers. And then there’s Chow Yun-Fat, whose character Mark was killed in the first movie. He returns as his own twin brother, so to speak: In this movie he’s called Ken, not Mark, but Ken he has exactly the same abilities and coolness as Mark. Sounds fine, but this sequel suffers from a meandering script plus a few glaring inconsistencies, like Kit recovering within a couple of days from two large bullet holes that almost killed him. The over-the-top action scenes are still breathtaking though, notably the grand finale, with the attack in The Wild Bunch style on the villain’s lair. 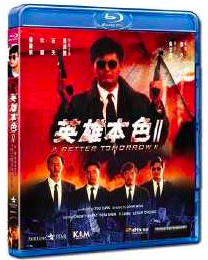 The Kam & Ronson Fortune Star BluRay for the second instalment seems to be currently unavailable on YesAsia, but you can order it HERE from Play-Asia or try your luck with some other international releases of this classic on DVD, BluRay and streaming for example here on Amazon.com or on Amazon UK or Amazon DE. 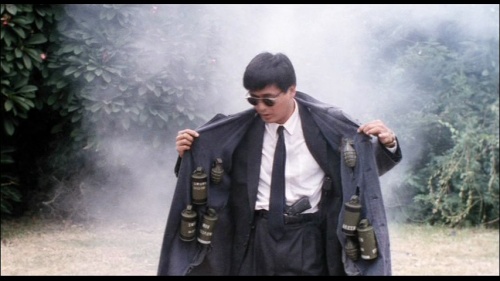 The third and final instalment in the Tomorrow franchise, not directed by John Woo (but instead by Tsui Hark, the producer and co-author of the first two movies.

Tomorrow 3 is a prequel, not a sequel, telling us how a young man from Hong Kong, Mark Lee (Chow Yun-Fat), became the coolest gunman East of No Name, North of Mad Max. A young Mark travels to Saigon in order to pick up his uncle and cousin and bring them back to the safety of Hong Kong, but the uncle is unwilling to leave the country and Mark and his cousin both get involved – romantically and otherwise – with a beautiful female gun runner and her jealous former lover …

This third entry is not bad, it’s actually a very decent action movie, but I had the idea that it would’ve worked better as an independent movie. Tsui Hark‘s action scenes are excessively bloody, but lack the energy and hypnotic elegance of Woo’s blood ballets. Biggest drawback: the film is set during the final stages of the Vietnam conflict and we get a few tanks and soldiers, but the war is only used as a distant background and the idea of a country torn apart by ideological hostilities and the violence of war is never transmitted. The over-reliance on slow motion and neo-noir style of arty-farty cinematography give the movie a strange formal look. 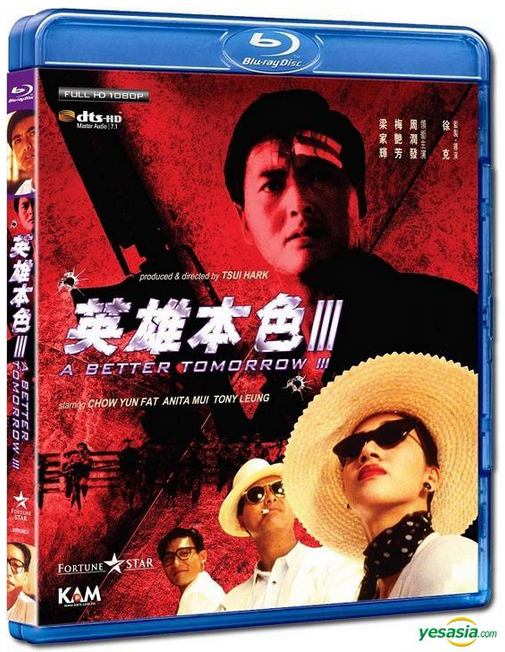 There’s a BluRay available from Hong Kong’s Fortune Star label as well (also Kam & Ronson license material), for this one. You can a) order it HERE from YesAsia. b) You can also order it HERE from Play-Asia or try your luck with some other international releases of this classic on DVD, BluRay and streaming for example here on Amazon.com or on Amazon UK or Amazon DE.

Some other John Woo classics are also better consumed in their imported version. Kam & Ronson have also restored more which are available from FortuneStar, for example, Bullet in the Head (which you find here on Play-Asia while on YesAsia there’s only the Korean version listed), The Killer which unfortunately doesn’t provide very good quality according to reviews (find it here on Play-Asia and here on YesAsia) and flicks like the popular Chow Yun-Fat classic Once a Thief (find it here on YesAsia), or Andy Lau rarity The Conman (find it here on YesAsia) and lastly, the Korean box set of John Woo‘s The Crossing makes for an interesting import as well (find it here on YesAsia). Of course, knowing that pretty much all currently available releases of his Better Tomorrow Trilogy are inherently flawed for some reason, you might as well try your luck here at Amazon.com or on Amazon UK or Amazon DE with a DVD or BluRay release that will carry you through the day, but in the end we still have hopes for some company, somewhere, to give these movies the presentation they deserve.

This article is a spiced up composite of a series of short reviews previously posted elsewhere.