The Host (2006) was named one of Writer-Director Quentin Tarantino’s top twenty films since he started making films in 1992. If that alone doesn’t make you want to watch it, then I’m not sure there’s much I can say to convince you otherwise. But I’ll try. There are a lot of films titled “The Host” but the only one worth watching is the South Korean one. There is currently a sequel in the works. The Host is about a giant fish-like monster that rampages through South Korea. It might sound like your typical monster movie, but what you end up getting is a surprisingly deep and emotional movie that just happens to feature an awesome monster destroying shit.

The monster itself was created by those silly Americans, who poured pretty much all the formaldehyde in the world down the drain and mutated a fish into a terrifying monster. This is actually based on a real event in which an American on a US military base dumped a lot of that chemical into a sewer that connected to the Han River in Seoul, South Korea.

The monster is CG, which does not usually turn out well, but it was done exceptionally in this film. The way the characters and environments interact with the monster is very impressive, and you can really believe that it’s actually there in the movie world. The destruction onscreen is a blast to watch. If this was the extent of the movie’s depth it would be a fun popcorn movie, but that is just the surface, the movie actually has some really layered characters as well as it being a profound statement on politics and panic in the public. The monster leads to a containment befitting any class act apocalyptic movie, and the main characters become renegades trying to recover a member of their family that was taken by the monster. I’m getting tired of referring to the monster as “The monster” so I’ll start referring to it by the same nickname used by the Director Bong Joon Ho and creature designer: Steve Buscemi. Yes, it actually was called Steve Buscemi reportedly because it was inspired by the way Buscemi acted in Fargo. Now, Steve Buscemi is one of my favorite actors and Fargo is a fantastic movie, but I don’t really see the connection.

The Host did very well for itself at the box office. In fact it became the highest grossing South Korean film of all time. Supposedly over 20% of the Korean population went to see the movie. It went on to be released in other countries and I’m sure Tarantino’s own recommendation gained it an entire new group of fans as well. Hopefully anyone reading my review will go out and watch this movie now, because it really is worth it. I don’t want to go into too much detail regarding the plot because I think it’ll be a better and more surprising experience if you see it not knowing much. All you really need to know is that it’s a clever drama with a strong social commentary wrapped up in an awesome monster movie. 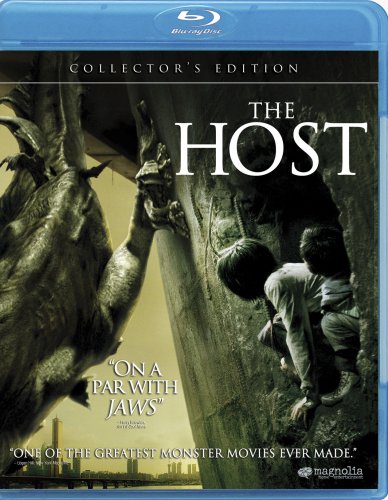