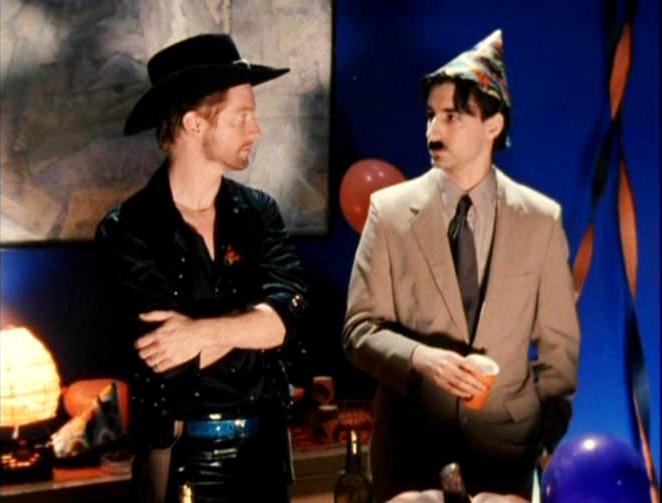 Highball is an episodic comedy by Noah Baumbach from 1997.

The movie is about three parties that the young couple Diane (Lauren Katz) and Travis (Christopher Reed) are hosting. The first one is a birthday birthday bash for Travis’ friend Felix (Carlos Jacott), who is not amused about the surprise and eventually even bails. The party sort of gets out of control, and that’s not even because the hired magician lights himself on fire by accident. The second one is a Halloween party. Some of the scars from the previous one have healed, and everyone is having a great time, but all kinds of drunken shenanigans are going on while Travis is passed out in the hallway after getting electrocuted from changing a lightbulb. The last party is the new year’s celebration. Much time has passed and their relationship has matured, but when Felix shows up five hours before the party starts, it does not bode well, and that’s not because Darien (Eric Stoltz) finally comes out which seems to surprise only Travis….

Highball is an early, and by some accounts failed, exprimental film by one of today’s most accomplished young romcom directors. With an indie cast that would make some other 90s comedies blush, it pulls off a rather decent movie and has gained somewhat of a reputation, even though (as interviews and the making-of reveal) it could probably count as a somewhat unfinished film. I found it to be actually rather funny, even though some of the performances can come across as a bit wooden. It has its own peculiar pace and style, but you can see some elements of what Baumbach would later deploy, whether you want to consider him a neo-Allen or not.

Most of the cast was already part of an earlier film of his, Mr. Jealousy (which I am unaware of). Most interesting is a repeat cameo by Peter Bogdanovich (director of such masterpieces as Targets). The rest of the small cast consists of Justine Bateman (Satisfaction, Men in Trees), Noah Baumbach himself (Marriage Story), Andrea Bowen, Eric Stoltz (Pulp Fiction) and a few others, such as Dean Cameron, Rae Dawn Chong, Chris Eigeman, Carlos Jacott, Annaella Sciorra and Ally Sheedy (The Breakfast Club). The thing is, that there aren’t really central characters or main protagonists, even though a few have more screentime than others. It’s much more of a Friends situation.

It’s not as hysterical as some of the liner notes or reviews may lead you to believe, but if you get the type of humor and situational awkwardness, then it is definitely funny. What makes it particularly funny I thought was the kind of chaos and mayhem of each of the party, the total lack of control and the sort of free for all this means for the characters. Just as an example, at the Halloween party there are two guests dressed in an identical dinosaur costume, mix in some alcohol and use your imagination what that could entail. For lack of comparison, the movie sits somewhere with Four Rooms and How I Met Your Mother.

Highball shines in little moments of chuckles, some minutes where the actors either pull of something great from the script (as little as may have been there) or improvise to a point where they are plausibly now living that character. If you dig that sort of Brooklyn style urban comedy, you might dig this movie, for all others it’s an oddball entry in Noah Baumbach‘s filmography.

MVD released the 90s movie on BluRay in early June 2022. The transfer looks good, but for the most part lacks detail and resolution. So aside from notable exceptions, it doesn’t lok very sharp and some things start looking quite blurred. It’s not the greatest transfer, but it’ll do. Who knows what shape the source was in and why a proper 2K or 4K scan was out of the question, but this looks barely like an upscale. The audio is alright, with dialogue well audible and no discernible hissing and things. There are optional English and Spanish subtitles. What is probably the greatest thign about this release is the extra, which consists of making-of documentary, which is a real making-of, not the usual eight minute TV promo featurette. It runs 71 minutes and is a really really in depth look (the movie itself runs about 10 minutes longer, so you get the idea). It includes interviews with producer Joel Kastelberg, co-writer and star Christopher Reed and stars Lauren Katz, John Leer, Rae Dawn Chong, Peter Bogdanovich, and Dean Cameron and because it was produced more recently and filmed in HD, it looks better than the movie, too. Oh yeah there is also the trailer.