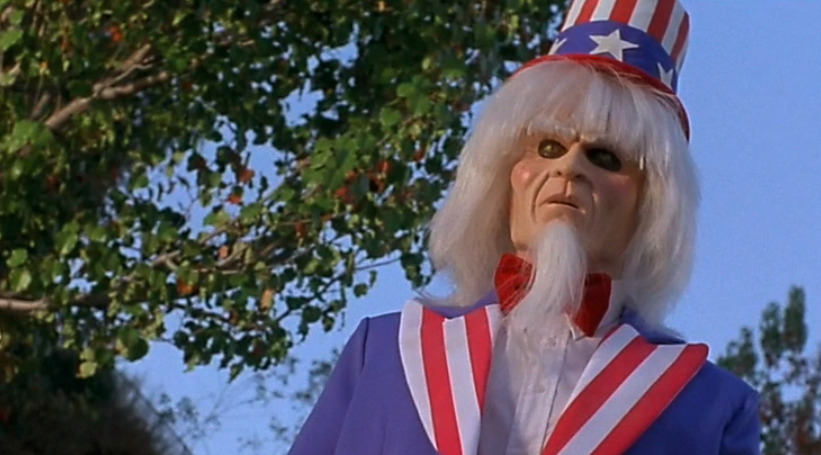 The movie is about Sam (unrecognizable in the movie, but played by one David Fralick), a desert shield army veteran that was killed by friendly fire. His remains are delivered home, where the community is gearing up for the annual Fourth of July festivities. His now widow Louise (Anne Tremko) lives with Sam’s sister Sally (Leslie Neale) and her son Jody (Christopher Ogden). Jody, for lack of a father, has always looked up to Sam, knows his letters from the war zone by heart, and enjoys war comics. In this child’s world, Sam is a hero, and he increasingly eyes with suspicion anything and anyone around him that might be questioning his patriotism. He is also too young to know or understand that when back home, Sam was an abusive alcoholic and wasn’t exactly missed. As Sam gets resurrected by a mysterious spate of events, he goes on a local killing spree, with disrespectful teens, corrupt congressmen (Robert Forster), Jody’s teacher (Timothy Bottoms) and others dying at his hands. As the festivities continue, Jody begins to realize Sam may not be all hero, he learns about his past and sees his killing spree. He joins up with Sam’s old mentor Jed (Isaac Hayes) and they try ant stop the undead Uncle Sam…..

Uncle Sam boasts a whole number of names that should sound familiar, including Bob Murawski (The Hurt Locker), who edited this, William Smith (Fast Company), who gets a cameo in the opening sequence and Bo Hopkins (The Wild Bunch) who gets one mid way through, as a character that may elicit some chuckles. Robert Forster (I think pre-Jackie Brown) is on board as well as Timothy Bottoms (The Last Picture Show). The movie was written by Larry Cohen (God Told Me To) and produced by George G. Braunstein (Red Scorpion). This reads like a who-is-who and is part of the allure of this picture. The real star however is little Ogden, who does a great job portraying the naive little kid whose inner conflicts and interaction with his adult environment add practially all the sociopolitical subtext to the movie.

The skills honed and premise successfully deployed for the Maniac Cop series (click here to read my review of them) gets a revamp here with an undead veteran instead of the beat cop. However, while the first stretch of the movie is close to brilliant as it slowly builds up the premise, the rest of the movie falls a bit flat on its nose for three main reasons: it’s not nearly as gory or violent as one would expect, the portrayal of Unlce Sam is neither scary nor plausible and all the nuance and substance built up earlier (the domestic violence, the miltarism, etc.) goes out the window and what follows are just a handful of tame kills and an ambiguous ending. In short: the movie builds up to a lot of disappointment. Interestingly though, with so many names attached and such a great premise, it had all the makings of a slasher classic, had it gone full on slasher movie. Instead it barely makes it past an interesting trailer level. That sounds a bit harsh, but I have to be honest, there could have been so much more, because the idea is there, it’s just the execution that lacks, it creates a lot of FOMO.

The 4K UltraHD BluRay edition from Blue Underground isn’t quite as jam packed as some other editions. For starters, they finally dropped the regular BluRay, and of course there is also no DVD aded here. This one does not include a booklet, but it comes in a lenticular slip case that looks pretty cool.

As expected, the picture looks great. The 4K transfer yields popping and saturated colors with lots of detail, crisp contrasts and is largely free of blemishes, albeit some scenes reveal a bit more grain and noise than others. The frame is slightly wider than usual, the cover calls it a 2.40:1 aspect ration. This 25th anniversary restoration was scanned in 4k 16bit from the original 35mm negative and features Dolby Vision HDR for those with the right equipment. Once more, BU illustrates how it’s done.

The audio is a bit more of a mixed bag. There’s a Dolby Atmos (which I tested on a humble 5.1 system only) and a DTS-HD MA 5.1 track. Even though the track sounds clear and crips and offers some oomph where necessary, it still sounds a bit flat and the odd surround effect can’t hide the rather center-focused mix. There are subtitles in English (SDH), French and Spanish.

There are a number of extras on this. The first being the 2004 audio commentary with the director, writer and producer of the film. This is a fairly entertaining and informative track as can be expected. There is however a second audio commentary with Bill Lustig and none other than Isaac Hayes. I am not quite sure if this is newer or whether it was recorded at the same time, but it has to have been before Hayes’ passing in 2008. I liked this one a lot more because Hayes is a crack up and that’s a nice combination with Lustig. Quite hilarious at times.

Fire Stunts with audio commentary by stunt coordinator Spiro Razatos (10mins) is not as might be expected just the fire stunt scenes with a commentary but is in fact that in combination with behind the scenes footage and pictures and thus delivers quite an exciting and informative look at how they filmed the final scene of the movie. There’s a deleted scene of almost a minute, but it’s a rought cut of takes, and it is definitely not missed from the movie either. Then there’s a 40 second gag reel, but not as you would expect, but it’s basically a practical joke. You gotta see it yourself. Then there’s the theatrical trailer and a poster and still gallery.

Conclusion: Uncle Sam is an interesting take on a premise successfully deployed elsewhere, that doesn’t quite live up to the expectation – and to the build up of the first third of the film. It’s fun, interesting and somewhat notorious, but not a must see. The disc is excellent and as always top notch quality from Blue Underground.