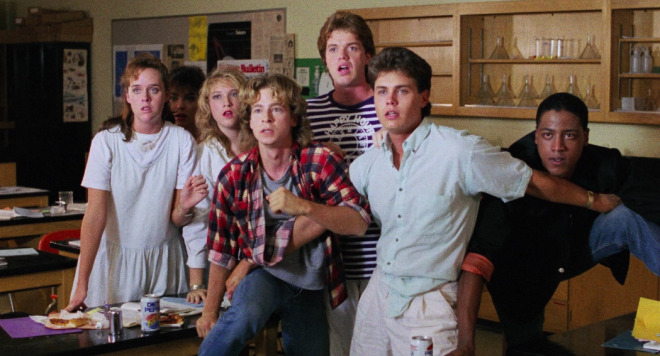 Monday Morning is a high school drama from 1990.

Bobby Parker (Noah Blake) is new at his high school and struggles to fit in. When he starts making friends with the most popular girl, his boyfriend James (Brandon Hooper), an arrogant prick with an entourage of bullies, gets jealous and starts provoking Bobby. This gets Bobby in trouble as the blame always seems to fall on him. When he starts properly dating James’ girl, James flips out and intends to threaten Bobby with a gun. In an ensuing scuffle, the gun ends up in Bobby’s hands and a teacher is shot…..

This is the first (and last) directorial effort of producer Don Murphy (Natural Born Killers, Gemini Man) who shot this while at USC but then went not the directing but the producing route. The movie very much looks and feels 80s, with haircuts, cars, music, etc. als giving off quite a John Hughes feel although the movie is of course neither as popular nor as light hearted as The Breakfast Club or something along these lines. However, thematically it is a full-on highschool movie with all the usual trimmings as can be expected, with popular boys picking on loner kids, rich girls driving foreign cars and bored students not paying attention in class and so forth. There’s also a component of domestic abuse. Overall, nothing out of the ordinary, where it takes a different turn of course is when things escalate and there’s a gun involved on the school premises.

Now, as much as it’s an interesting story and sort of well made, the whole thing is a bit annoying as the principal character keeps being blamed for things he didn’t do, kind of the high school experience where the bullies keep getting away with things. Yet it’s so predictable that once things escalate it seems that he is actually the perpetrator whereas he is constantly being harassed by the little fascisty fratboyish dudes, he’s just too clumsy. Infuriating is what it is, and most characters just behave rather stupidly. Luckily, the ending is a bit more multi-faceted than the run up to it, and I left watching the movie on a positive note, even though overall it kind of drags and doesn’t really leave a lasting impression. For a thesis movie however, which is what it is, a low budget, school project, it’s almost impressive. It captures the desperation of a school kid in a situation like that, it’s just that 97 minutes is almost too long.

The BluRay from MVD’s Rewind Collection (also see my review of Highball) offers so-so image quality, with nice colors and contrasts, but lacking some detail and a bit too much noise visible, originating from a less than pristine scan (gives the noise filter too much work to do, but may be due to 16mm source material), but it’s overall satisfactory and quite a step up from DVD, albeit not up to contemporary standards regarding HD restorations. The audio sounds fine, with decent dialogue audibility but minor hissing here and there (and there is some overall noise noticeable). Overall, it’s a fine presentation of a less than well known title, which should make a lot of folks happy just from an availability standpoint alone. There are optional English subtitles included on this (by the way region free) disc.

There are some interesting extras included. The first is a scan of the original VHS version “Class of Fear” which runs the same length but is obviously in rather atrocious quality. The main difference is really just the alternative title. Then there is an interview with Don Murphy (52 minutes), who reveals that this was this thesis film at USC film school, and it’s really what you’d expect from a making of interview that is in depth with a length like that. There’s a lot to learn from this interview, and not just on the man and his work, but even beyond. A really cool extra. Lastly, “Don Murphy – portrait of a producer” (24 minutes) is a bit older than the interview and this is profiling his producing work, quite an interesting primer. I am also starting to like the look and feel of this series, it comes in a cardboard sleeve and there’s actually a little fold out poster inside. neat.