SUNSET BOULEVARD is ready for its hi-def close up

We’re extremely excited to hear that one of our favorite furious film noir classics Billy Wilder’s masterpiece Sunset Blvd. is coming to Blu Ray this Fall.

The film tells the story of a down on his luck screenwriter named Joe Gillis (William Holden) who finds himself caught in a strange situation when, while on the run from some repo men, ends up at the secluded Hollywood mansion of a silent film star named Norma Desmond (Gloria Swanson). It’s clear that Desmond has become a delusional recluse since her departure from the movie business years earlier. Gillis catches a nice break when she offers him a temporary residency in return for helping her complete a script shes been working on that she hopes will be her grand comeback to the business. Only Joe’s outside life begins to disrupt his relationship with the fragile Norma who grows more jealous as she falls in love with him. This is a film that slowly pulls the viewer into its grasp just like Norma’s hold on Joe. Once you get caught up in this story you’ll never forget it! 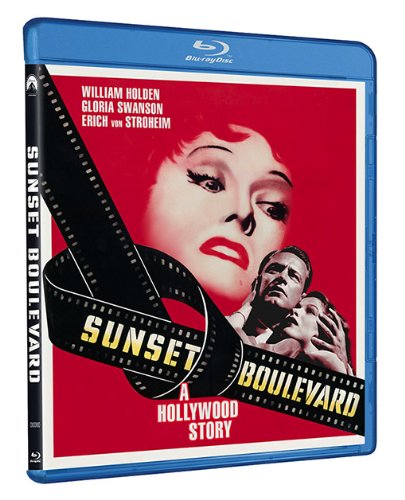 Paramount Home Media Distribution proudly presents one of the studio’s most iconic films, newly restored and in sparkling high definition for the first time ever, when SUNSET BOULEVARD debuts on Blu-ray November 6, 2012.

A fitting release to continue Paramount’s centennial celebration, Billy Wilder’s seminal classic continues to enthrall audiences with its bizarre and tragic tale of Hollywood’s dark side. Nominated for 11 Academy Awards®, including Best Picture, and winner for Best Writing, Best Art Direction and Best Music, SUNSET BOULEVARD was named by the American Film Institute as #12 on its list of the Greatest American Movies.

William Holden, as a struggling young screenwriter, and Gloria Swanson, as an aging silent film queen, created two of the screen’s most memorable characters, delivering unforgettable performances amidst the dramatic light and shadow of John Seitz’s evocative cinematography.

Not only a cinematic masterpiece, SUNSET BOULEVARD also captures some extraordinary moments in Hollywood history, including Cecil B. DeMille on the set of Samson and Delilah, which was erected in a soundstage still in use on the Paramount lot. Director Erich von Stroheim, who had directed Swanson previously in real life, appears as Norma Desmond’s butler and former director. Various notable figures make appearances in the film as themselves, including actors Buster Keaton, Hedda Hopper, Anna Q. Nilsson and H.B. Warner. And, of course, there are the iconic images of Hollywood itself, including the well-known shot of Paramount’s legendary gates.

The main objective of the restoration effort was to remain faithful to the distinctive look created by the director and cinematographer. Stark shadows and darkness occasionally cut by the bright light of a film projector are themselves essential in telling the disturbing story of madness and obsession. The restoration team secured a vintage print made at the time of release from the Library of Congress to view and study the tones and extensively researched documentation from the production to accurately present the director’s original vision. Although none of the original nitrate materials survive, the restoration team conducted a worldwide search for the earliest generation elements, ultimately using an acetate 35mm duplicate negative as a primary source for scanning at 4K to create the highest picture quality possible.

In addition, work done on the film’s original mono soundtrack back in 2001-2002 was expanded upon. As with the picture, no original sound materials survive, but a variety of source elements were analyzed, transferred, digitally cleaned and incorporated into the final restoration – including optical soundtrack negatives, music and effects tracks and partial music master materials.

The SUNSET BOULEVARD Blu-ray boasts over two hours of in-depth bonus material that sheds light on the film, its origins and its path to becoming a classic. With featurettes on stars Gloria Swanson and William Holden, a look at renowned costume designer Edith Head, an exploration of the Paramount lot of the 50s, a Hollywood location map and much, much, more, the Blu-ray offers a comprehensive guide to this enduring cinematic treasure. In addition, the Blu-ray features a never-before-released deleted scene entitled “The Paramount-Don’t-Want-Me Blues”, which was obtained from the Academy Film Archive and features Academy Award-winning songwriters Jay Livingston and Ray Evans performing a comedic song that was cut for fear of being too Hollywood insider in 1950.