If you’re tired of all the eye straining, headache inducing 3-D gimmickry maybe what you need is a dose of a different classic cinema format to appreciate on home video. Thanks to the folks at the DVD label Flicker Alley, the 1952 feature film introducing the widescreen process CINERAMA is coming to Blu Ray this September. The newly restored edition will be shown exactly as it originally was to over 20,000,000 viewers in the original roadshow version. The movie is a virtual traveling point of view extravaganza as you’re taken on a grand journey across the globe. You’ll do things like go on a rollercoaster ride, watch a bullfight and experience a flight across the USA from the nose of a B-25 bomber plane!

What made Cinerama so epic was the fact it was created by using three separate cameras which increased the normal viewing aspect ratio. When it was shown to audiences it in turn required three separate projectors and multiple audio tracks thus creating a truly magnificent, one of a kind visual/audio experience. It was later used for the film How The West Was Won.

This is Cinerama was narrated by travel writer and newscaster Lowell Thomas. The producers were Lowell Thomas, Merian C. Cooper, and Robert L. Bendick, directed by Bendick (and an uncredited Mike Todd, Jr.). Merian C. Cooper was already part of cinema innovation since he had worked on King Kong. It was later nominated for an Academy Award for Best Music, Scoring of a Dramatic or Comedy Picture.

SPECIAL FEATURES: Audio commentary track; This Is Cinerama Breakdown Reel ; Alternate Act II Opening for European Versions ; This Is Cinerama Trailer re-created; TV Spots: This is Cinerama and Seven Wonders of the World; Tribute to the New Neon Movies: A video short celebrating the Cinerama revival in Dayton Ohio, 1996-1999, in which a lone projectionist sets up Cinerama for special screenings to people from all over the country; Tribute to the New Cooper: The first Super Cinerama Theater; Special Photo Galleries; Fred Waller Radio interviews (audio only). 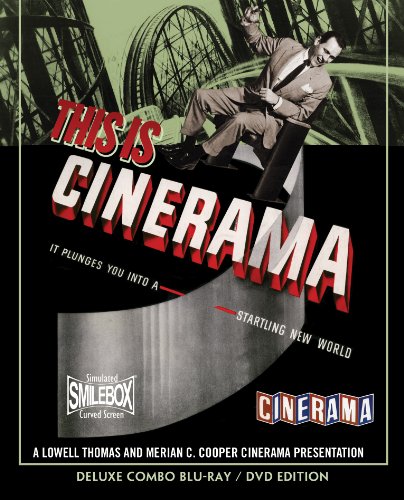