The epic and operatic culmination of Marvel Studios’ past 10 years of storytelling begins with Avengers: Infinity War and will continue with Avengers 4 which is for now untitled. One thing is for sure, if you’re a devotee of the MCU or even if you’re a casual viewer, Infinity War will take you to places you’ve dreamed of and ones that you might not expect. Joe and Anthony Russo along with writers Chris Markus and Steve McFeely have made what is the most emotionally complex and cinematically extravagant (filmed entirely in IMAX) entry we’ve seen in this cinematic universe. 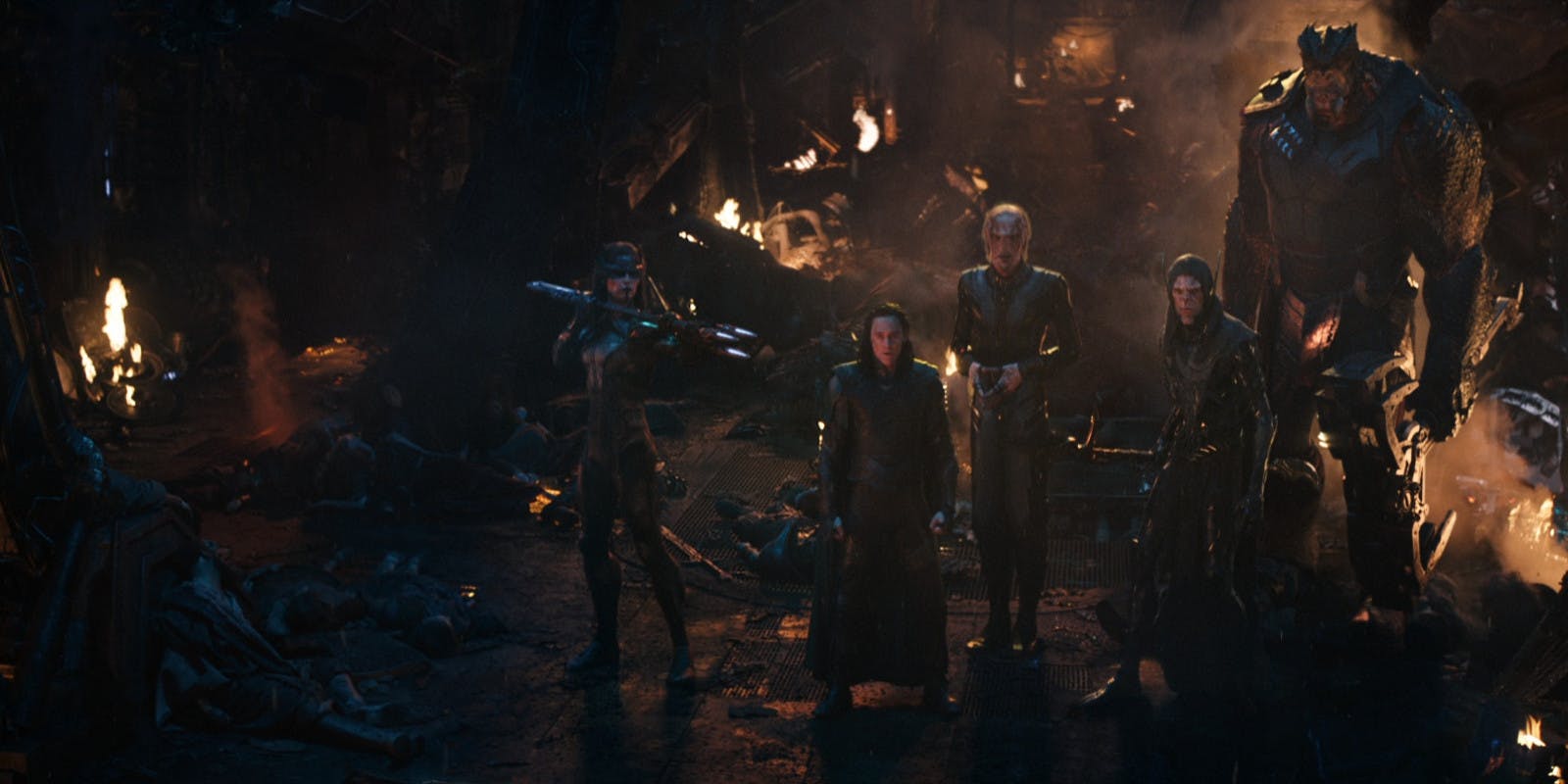 The story focuses on the legendary supervillain Thanos (played by Josh Brolin) a tortured genius warlord that has wrought his amoral philosophy across the cosmos. His obsession: to balance the universe by wiping out half of every race. It’s something he sees is needed to keep things in check, a veritable pruning of overgrown shrubbery to thwart worlds being enveloped and destroyed. His lifetime has been spent trying to amass all 6 of the Infinity Stones (Space, Power, Time, Mind, Soul and Reality) so they can be placed in a custom gauntlet made for this purpose. Now with his grand scheme in action, it’s up to Earth’s mightiest heroes, The Avengers to stop him. Only our heroes are scattered and broken apart after the events of Civil War with Captain America (Chris Evans), Falcon (Anthony Mackie), Black Widow (Scarlett Johansson) now a globetrotting renegade vigilante force on the run from the government. On the brighter side, Tony Stark (Robert Downey Jr) and Pepper Potts (Gwenyth Paltrow) have rekindled their relationship. 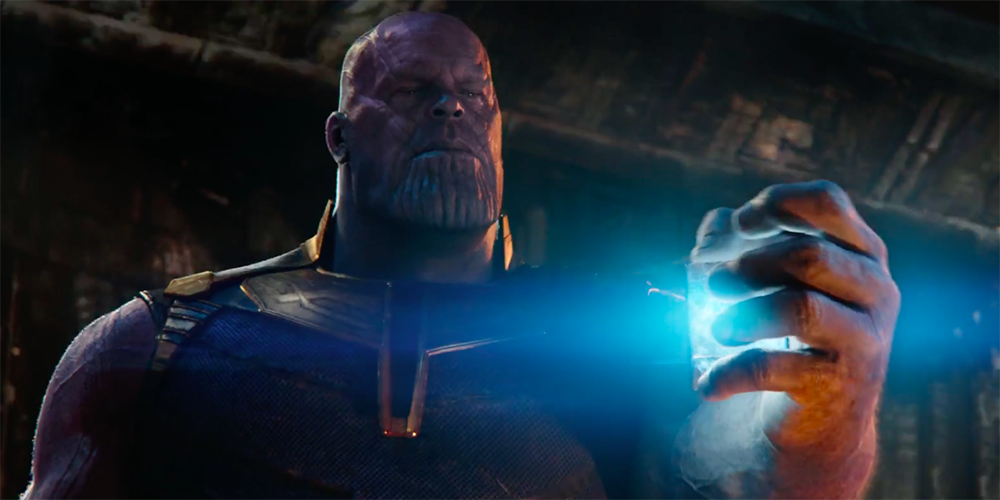 Thor (Chris Hemsworth) Loki (Tom Hiddleston) and Hulk (Mark Ruffalo) are the first direct victims of Thanos, who gets the Tesseract from Loki and tosses Thor into space. He is discovered by the Guardians of the Galaxy who proceed to find out what is happening. With the help of Rocket and Groot, Thor goes to the realm of Nidavellir to find Eitri (Peter Dinklage) the being that forged his hammer Mjolnir to try to create a new weapon to defeat Thanos. Star Lord, Gamora, Mantis & Drax head to Knowhere to try to warn the Collector who has the Reality Stone.

When Bruce Banner suddenly crashes into the Sanctum Sanctorum after being transported by the Bifrost, he warns Strange (Benedict Cumberbatch), Wong (Benedict Wong) and Tony that Thanos is on the way to take the Mind and Time Stones. There’s another problem, Bruce realizes the Hulk isn’t coming out to play. Like clockwork orange, two of Thanos’ ugly children Ebony Maw (performance artist/voice Tom Vaughan Lawlor) and Cull Obsidian (performance artist Terry Notary) drop into New York City to take the stone from Strange which is where we get our first big scale fight sequence. During a school trip, Peter Parker aka Spider-Man (Tom Holland) notices the large Q Ship hovering over Manhattan and swings into action to assist Iron Man, Strange, Bruce and Wong. This fight culminates with Ebony Maw capturing Strange with Tony and Peter stowing away onboard the Q-Ship to try to help the good Doctor. 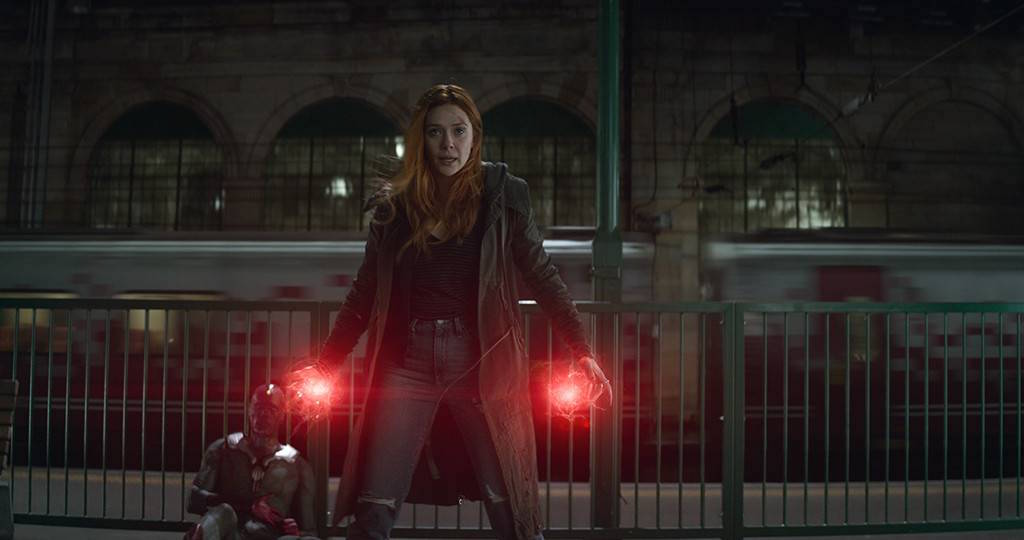 Across the pond, Wanda Maximoff (Elizabeth Olsen) and Vision (Paul Bettany) are in love and quietly living in Scotland. When they see on TV the alien attack on New York and that Tony Stark has gone missing they know they need to prepare, only it’s already too late. Two of Thanos’ children Corvus Glaive (performance artist Michael James Shaw) and wife Proxima Midnight (performance artist Carrie Coon) arrive and they’re not looking for directions to a nice hotel. They seek the mind stone which is part of Vision. Luckily, Cap and his team appear to stop their plan. With the word out on Thanos, the Avengers must put their past troubles aside and regroup.

One of the most impressive parts of Infinity War is how the writers constructed the story so each of the large number of characters have an equal part to play in this mind blowing action-adventure. By taking inspiration from 90s heist films, the film moves pretty rapidly but smooth and never gets too overwhelmed due to the various groups going on their own mini missions. The Russos cited films like Out of Sight and Nashville as part of their inspiration for the ensemble structure and pacing. 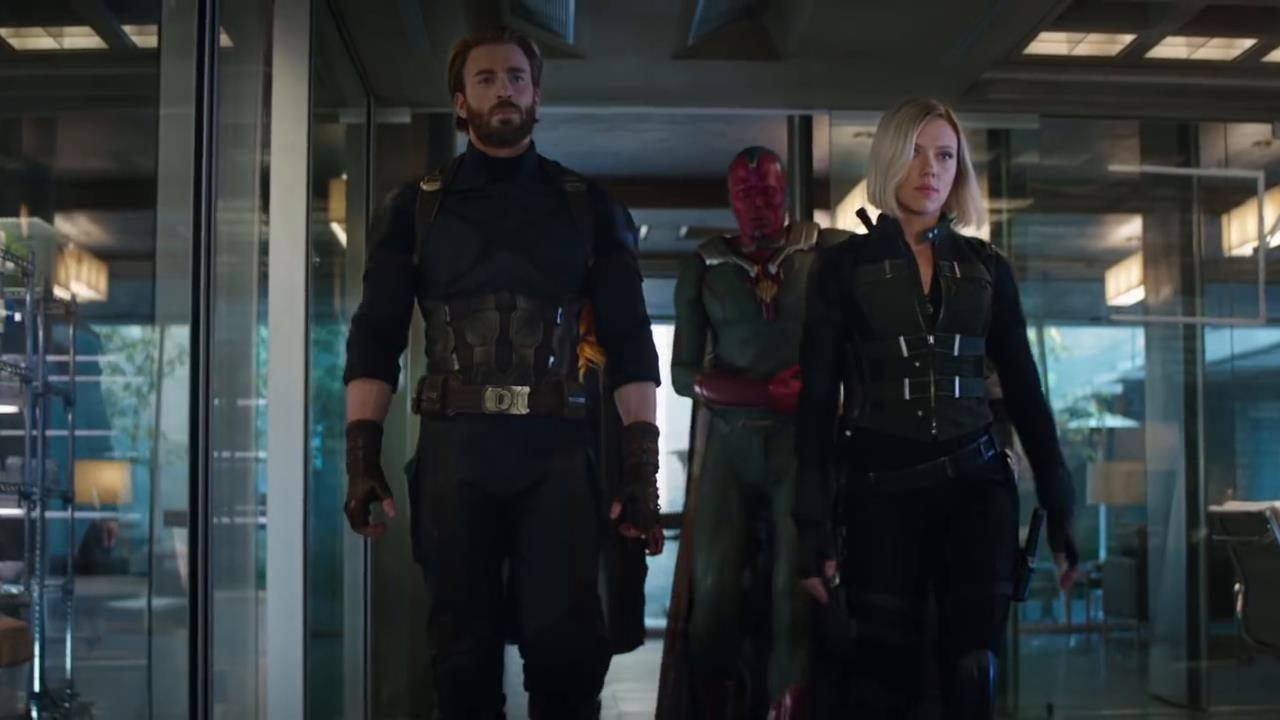 Unlike past Marvel movies, Infinity War spends a significant amount of time on its antagonist, so we get to know as much as possible. Instead of being just a “bad guy”, Thanos is depicted as a man on a mission for a higher purpose. This isn’t about mere revenge, ruling or riches, it’s about making things better for everyone in the universe albeit through a very psychotic concept. The CGI rendition of Josh Brolin’s unique performance is simply astounding. It’s the best unreal film character I’ve ever seen. Every twitch or tiny motion is transformed into making this image come alive. The big purple guy is equal parts madman and doting dad and his past as an outcast and feared space tyrant is conveyed really wonderfully by Josh Brolin and the artists. 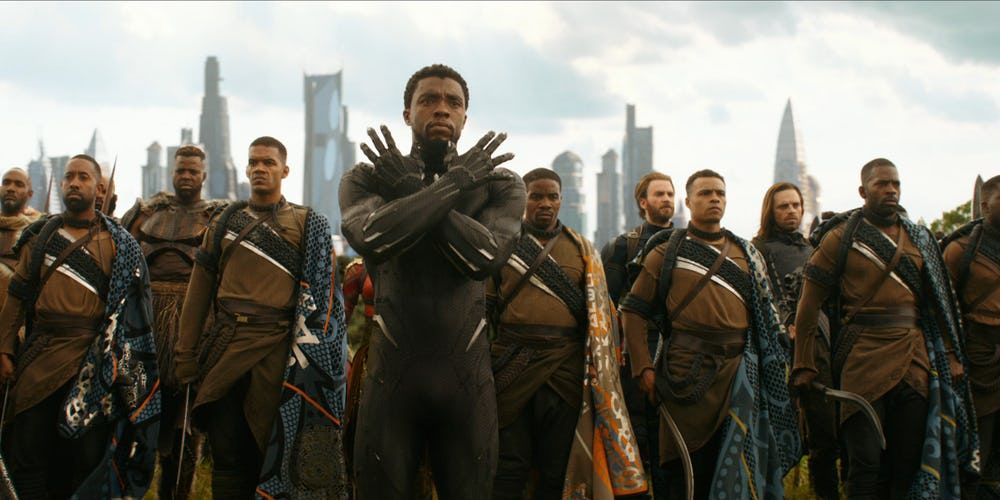 The film’s massive scale Starship Troopers meets Zulu finale takes place in Wakanda, home of T’Challa the Black Panther where Thanos’ army of multi-armed aliens called The Outriders are sent to attack and retrieve the Mind stone, which is embedded in Vision’s forehead. Bucky Barnes (Sebastian Stan) is back from cryostasis and has had his HYDRA programming deleted thanks to Shuri (Letitia Wright) and her advanced tech. The reformed Avengers and the Wakandan soldiers co-led by M’Baku (Winston Duke) are ready to fight to the death if need be. This battle takes every ounce of might the heroes can muster. It is the last chance to stop Thanos’ diabolical dream from coming true.

Avengers: Infinity War is a true triumph of science fiction/fantasy cinema. By taking 10 years worth of stories and wrapping them up with such deft skill and precision it’s a testament to the love the filmmakers have for these characters and the cutting edge talent of the people working at Marvel Studios. They’ve wholly succeeded and made a film that will be seen as a benchmark for this genre in years to come.