Runaway Train is a fast paced, action-adventure film that was based on a screenplay by Akira Kurosawa and shelved due to financial troubles. The rights to the abandoned script was later bought and re-written by Djordje Millicevic, Eddie Bunker and Paul Zindel and turned into a film directed by Andrei Konchalovsky in 1985. 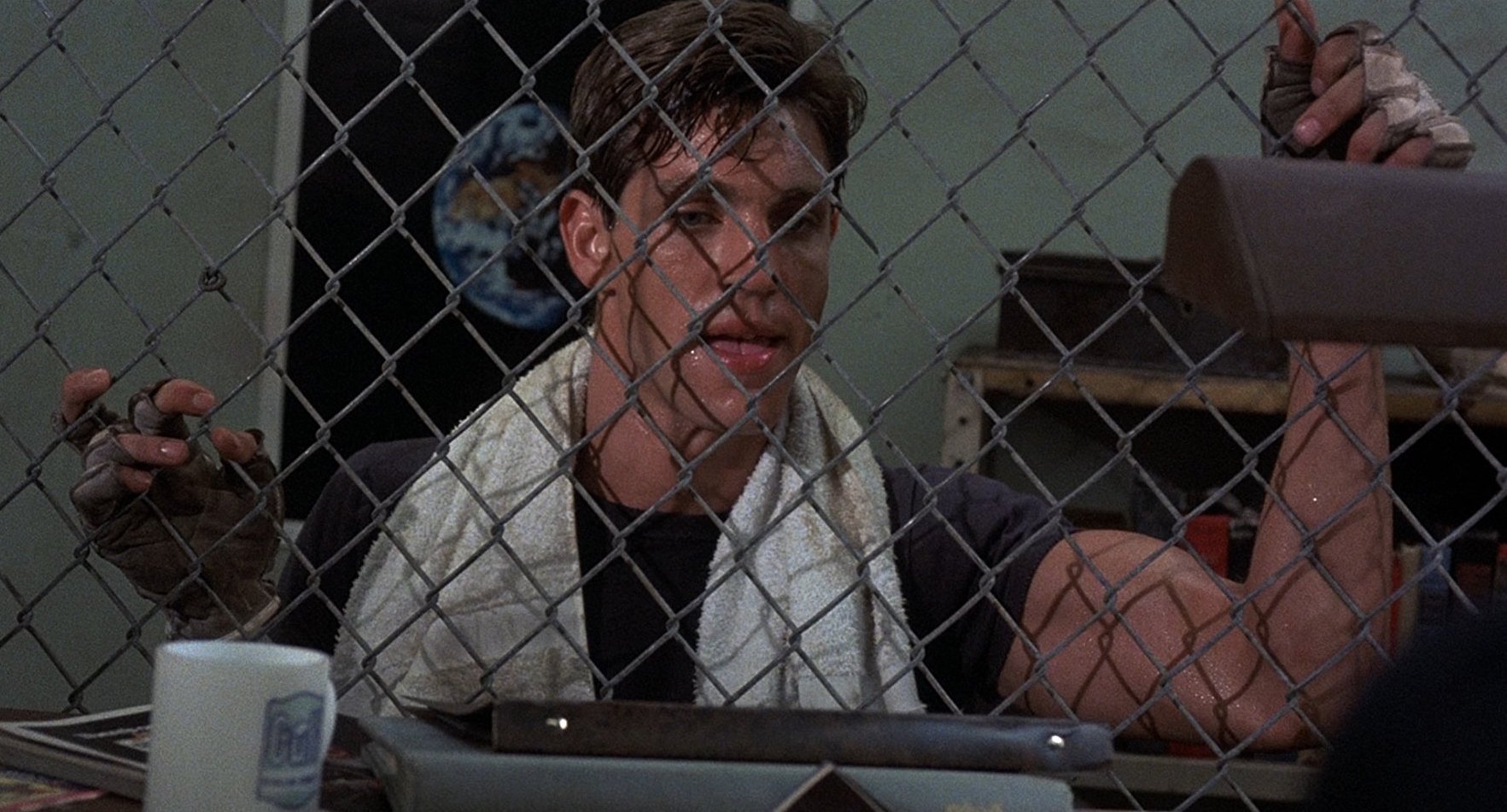 The story begins at Stonehaven, a maximum security prison somewhere in the snow covered environs of Alaska. The prisoners are in the middle of rioting and the place is all out anarchy. We’re introduced to Buck (Eric Roberts), a young con who has been locked up for statutory rape. Right away we see that he is a fast talking shyster who’s always looking for the angles. He seems almost unaffected by his dire circumstances in the hellhole, screaming, laughing and treating the place like a big playground. Buck is lucky too because he has a job moving laundry in and out of the prison, so it’s clear he has been a model convict who is able to live more freely than the other prisoners. He is also a boxer.

While the inmates turn the prison into a shit pit, an older convict is set to be released out of high security lockdown. This man has become a living legend for being so deadly and rebellious. His name is Oscar “Manny” Manheim (Jon Voight), a killer who has been literally welded into a special solitary cage. Upon a pre-release visit by Warden Ranken (John P. Ryan), Manny even tells him to go fuck himself right to his face. Although he is a menace, his being freed could be good for the prison just to help them settle down, that or it could just make things worse. After being let back into the population, Manny is immediately welcomed by his old friend Jonah (Eddie Bunker) and Buck, who considers him a hero. 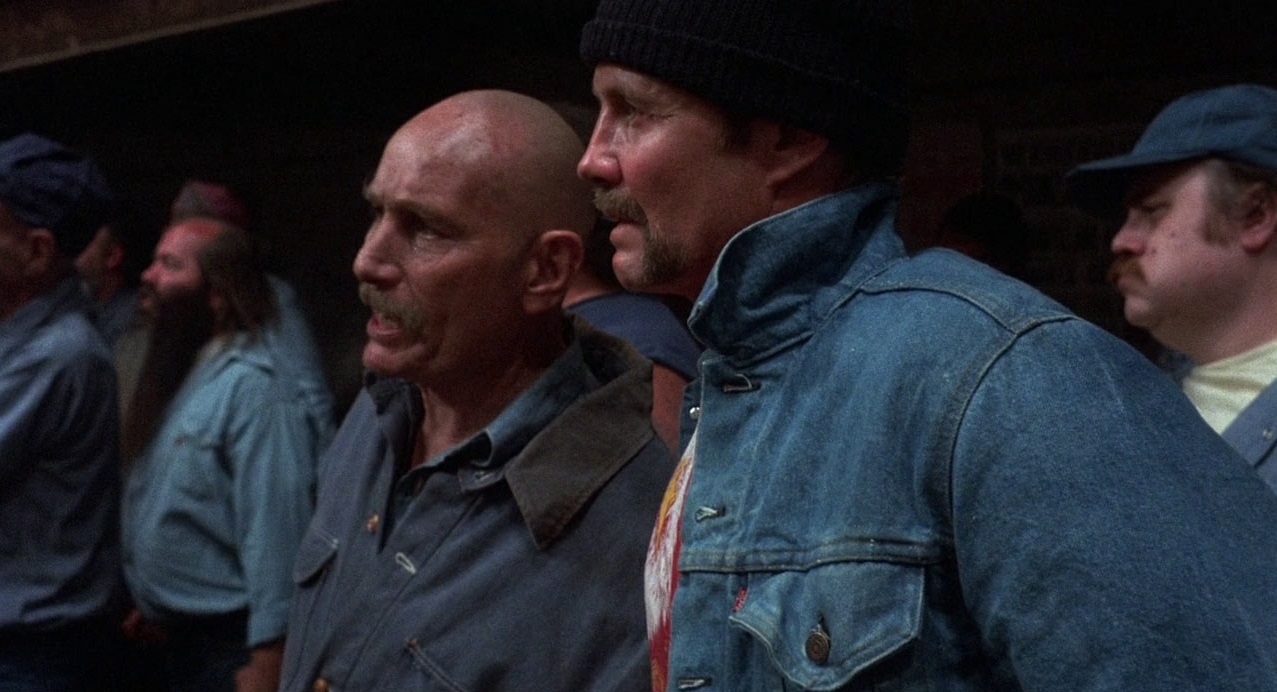 To get rid of some of their aggression, the inmates are able to attend a boxing match that Buck is taking part in. Look close at his opponent and you might recognize him. It’s Danny Trejo (Machete himself) in his first big screen role. Trejo was a real convict, and was newly out of prison when Eddie Bunker invited him to be Eric Roberts’ boxing coach on set. He later got the bit part as well which led to his getting into acting.

As the match goes on, a crazed convict targets Manny and attacks, stabbing him twice, but Manny fights back like a wolverine. He seems to be unstoppable even while wounded as he fends off the guy. The convicts go wild at this sight and it’s pandemonium again. Manny becomes a kind of star of his own show as he swings his knife at all comers and spits defiant words. We can see this is where he thrives. Everyone, including Warden Ranken can see the power Manny holds. Suddenly, Jonah repeatedly stabs Manny’s attacker and kills him and is later thrown into the clink. 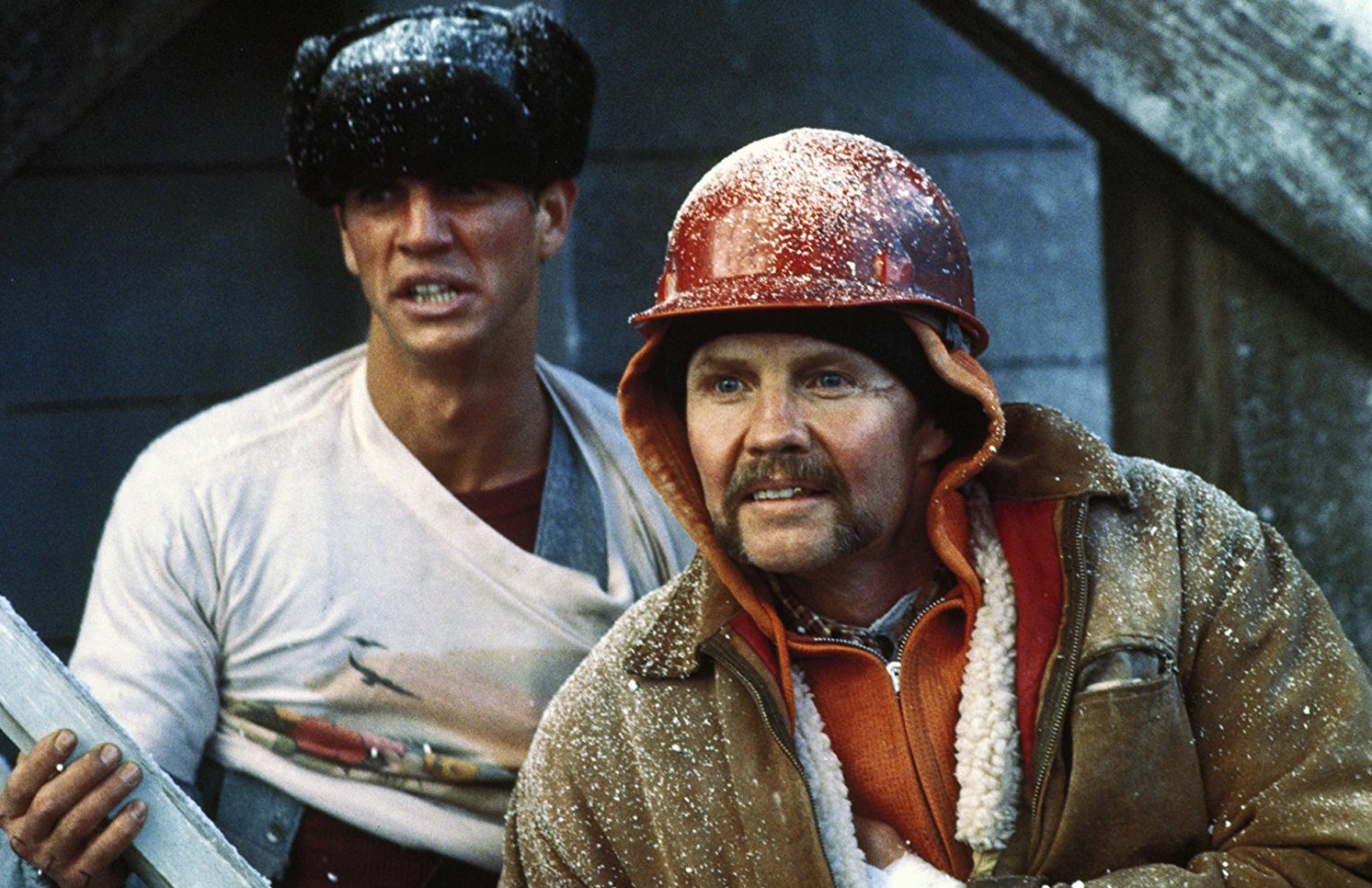 Manny visits Jonah and lets him know he’s going to bust out of the place. He invites Jonah to go but the old veteran knows he can’t hack it on the outside, telling him prison is his home. Buck is able to hide Manny in his laundry cart and smuggle him past guard Jackson (Tommy “Tiny” Lister) who he is friendly with and keeps happy by giving him some new boxing shoes for a family member. Once out in the yard, Manny gets ready to escape by covering himself in grease and plastic wrap. Buck decides to go with him and the two make their way out through the sewage drain which brings them to a frozen river where they float away.

After hiking through the Alaskan wilderness and nearly freezing, they finally get to a train station where they warm up and get some extra clothes and supplies, Manny’s plan is to jump a train and ride out to freedom. The two stowaway in a compartment and get ready to leave. What they don’t realize is the train conductor has had a heart attack and falls down dead as the train begins to move out of the station. 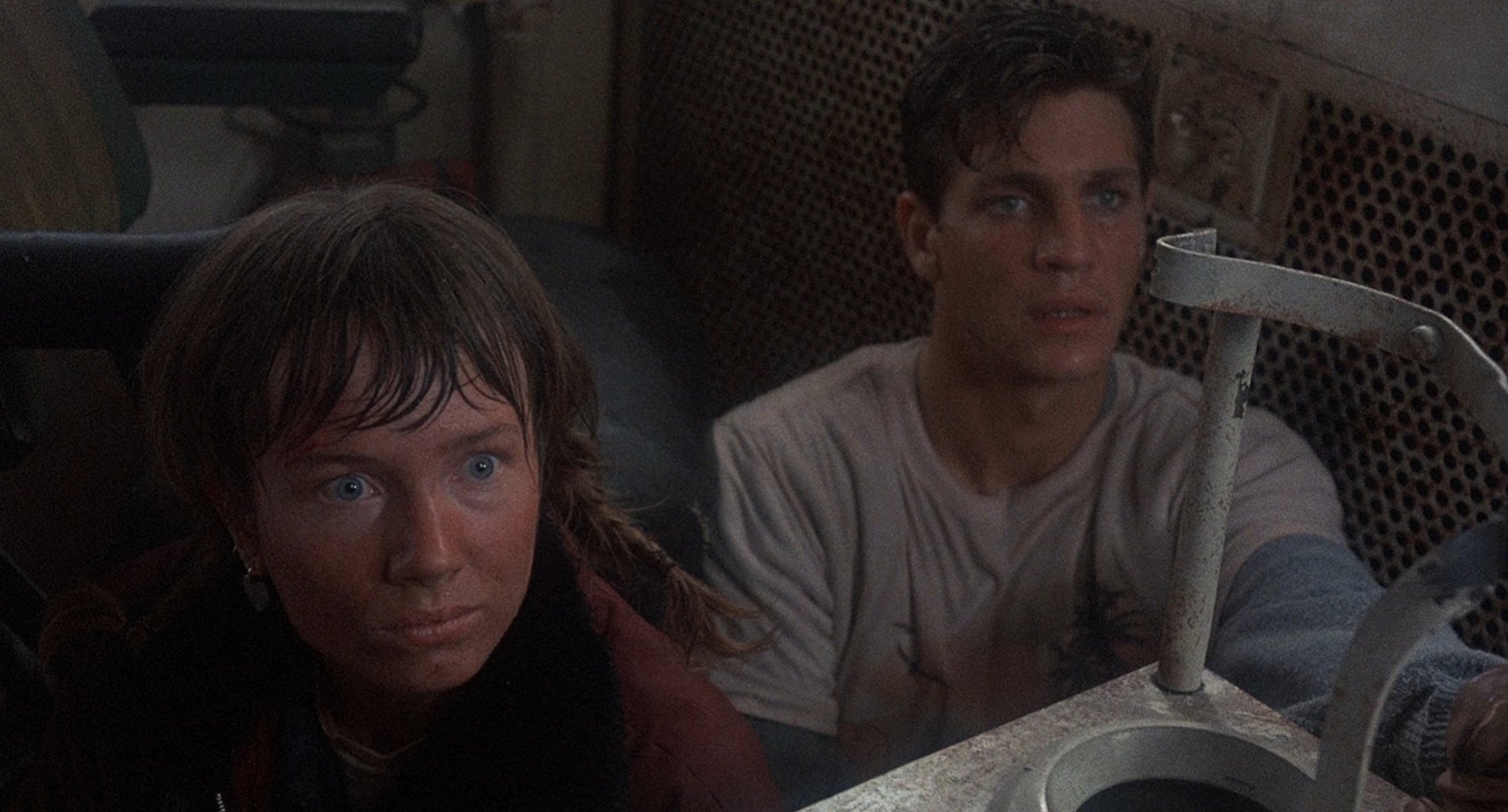 Manny and Buck now are on the train without a conductor as it barrels through the frozen Alaskan countryside. Only soon they find they actually aren’t alone. One train worker is left, a woman named Sara (Rebecca DeMornay) who hit her head and passed out after the train hurtled through a block. Now she has awoken to find herself stuck with two of the worst people she could encounter, on a unmanned train no less.

Meanwhile, at the train dispatch, Frank Barstow (Kyle T. Heffner) and Dave Prince (T.K. Carter) are doing their best to try to change the rail-lines and keep them clear so the other trains are safe from harm as the runaway picks up speed. When Warden Ranken learns of the train and that there are people aboard he knows that it’s Buck and Manny and moves into action to get them back to prison at any cost. 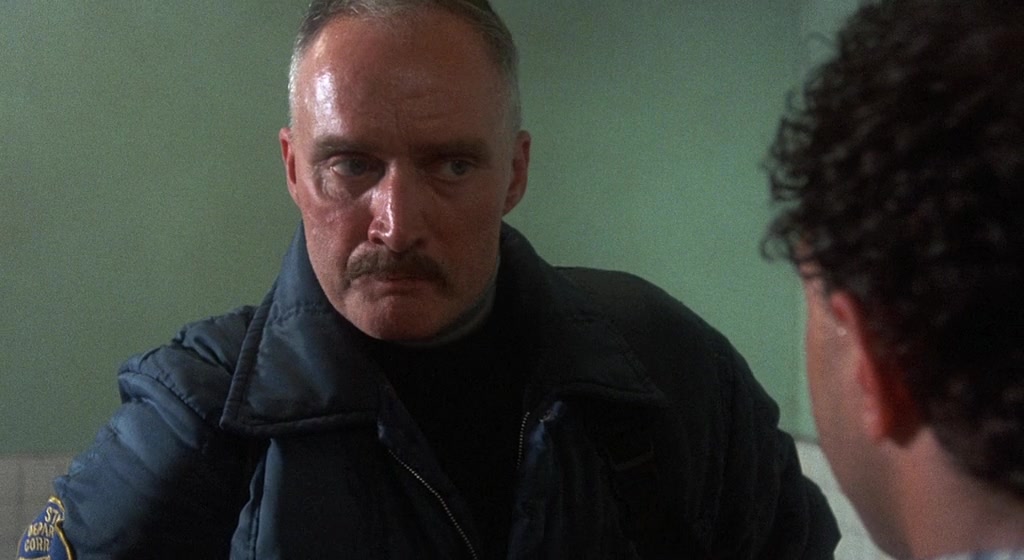 Manny, while a hero to Buck, is like a wild animal who can’t really relate to anyone. He knows although he is out of prison, he won’t be able to deal with the real world. As the train barrels along, he’s ready to even kill Buck and Sara, but one glimmer of humanity seems to still be there in his heart and stops him. Jon Voight is one of my favorite actors, from movies like Midnight Cowboy and Deliverance and this is another one his great film performances. He plays Manny as a kind of cursed beast who has hurt others and himself his whole life but still knows right from wrong and wishes he could be different kind of human being. 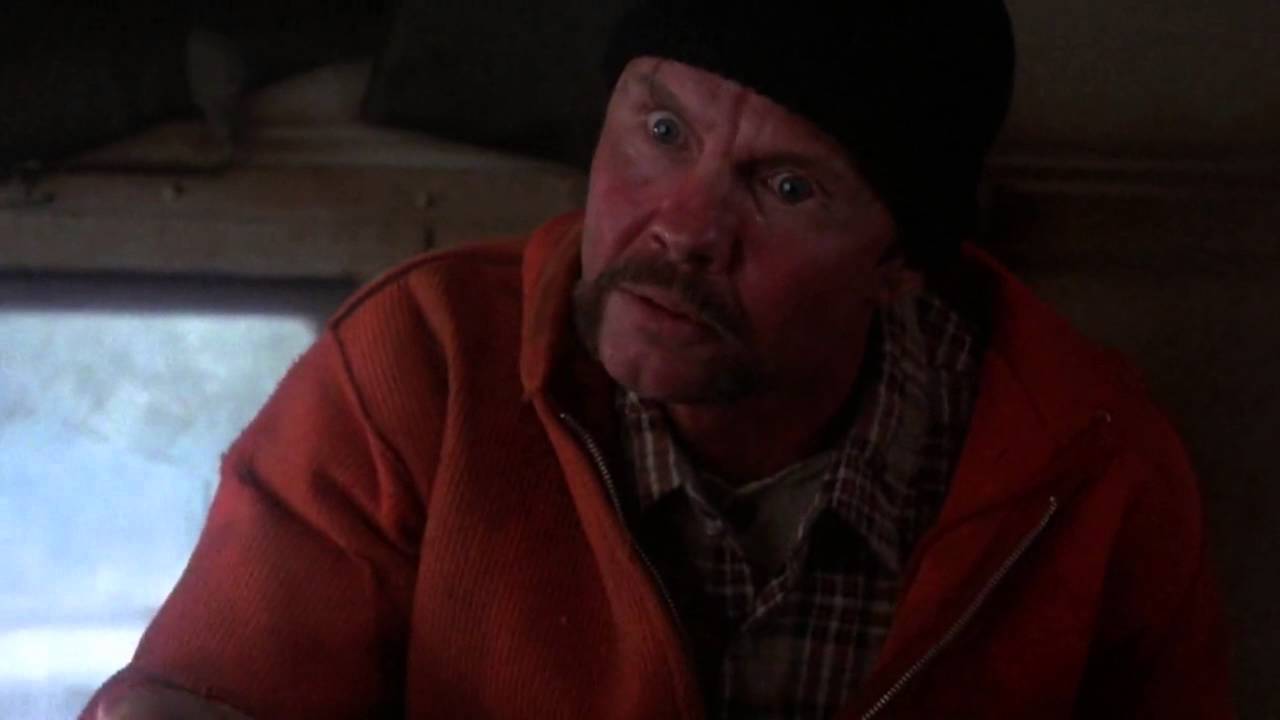 Eric Roberts adds much of the films humor with his high-falutin, loud talking portrayal of Buck, the young kid who is tagging along and who looks up to Manny. Roberts would go on to play another memorable sidekick character in The Pope of Greenwich Village which released the same year as this film.

Rebecca DeMornay, fresh off her role as the sex kitten in Risky Business (another film featuring her on a train) isn’t playing that kind of character at all here. She’s in heavy workclothes and sports a dirty, sweaty face. She certainly does a wonderful job as Sara, someone who cares alot about her fellow man, even two dispicable thugs like Buck and Manny. 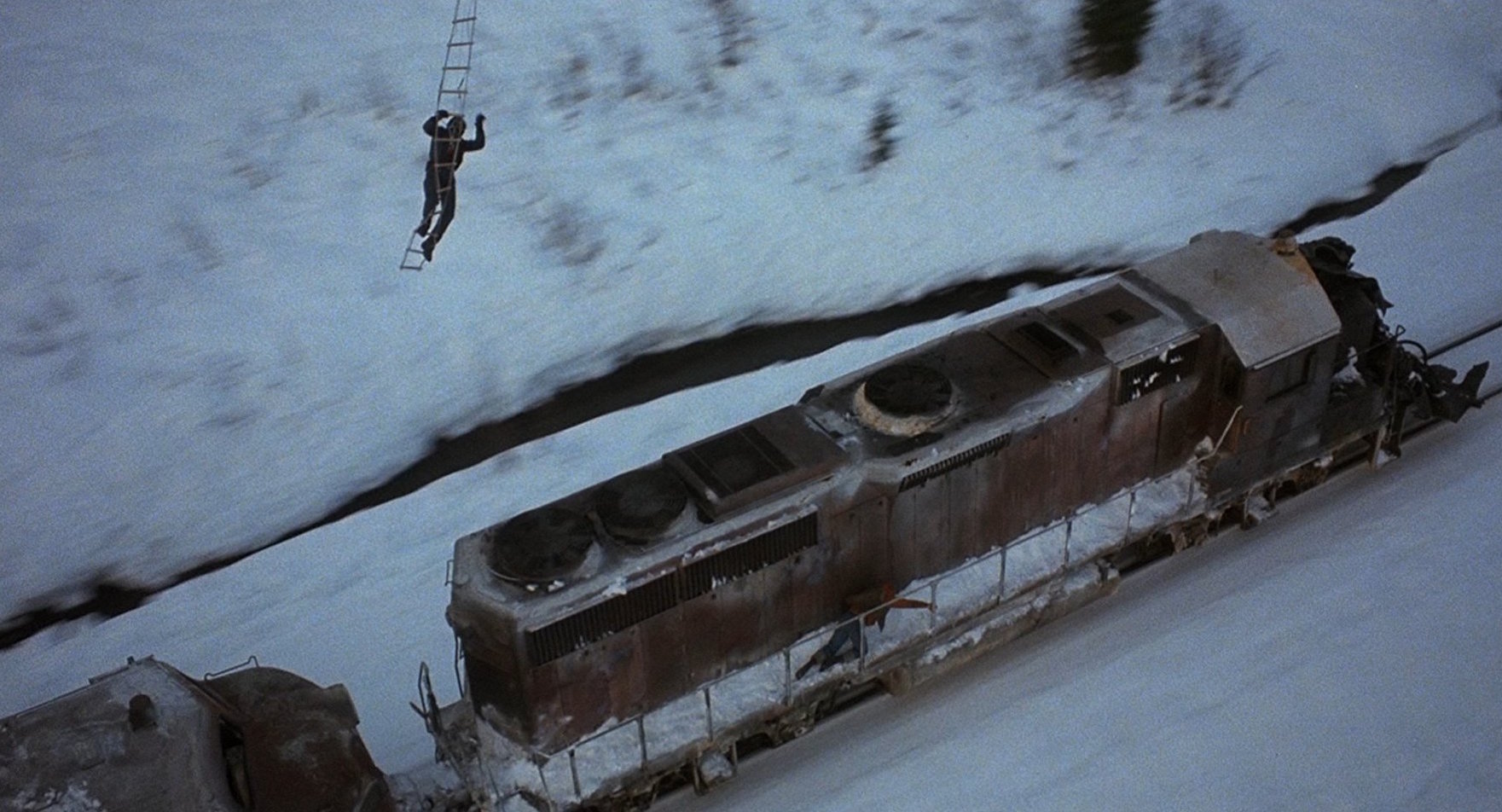 Much like Straight Time, another all time favorite of mine, Runaway Train works as both a close up study of the criminal mentality as well as a genre film. This was because of co-screenwriter Eddie Bunker who was an ex-con himself and knew these kinds of men well and was able to find the truth and realism in those kinds of characters and channel it into his scripts with precision and flair.

If you watch and enjoy Runaway Train, you should take some time to check out Tony Scott’s Unstoppable which is a similar story, but instead of prison escapees, it features two train workers (Denzel Washington and Chris Pine). It’s another well made, highly charged, suspenseful action thriller. 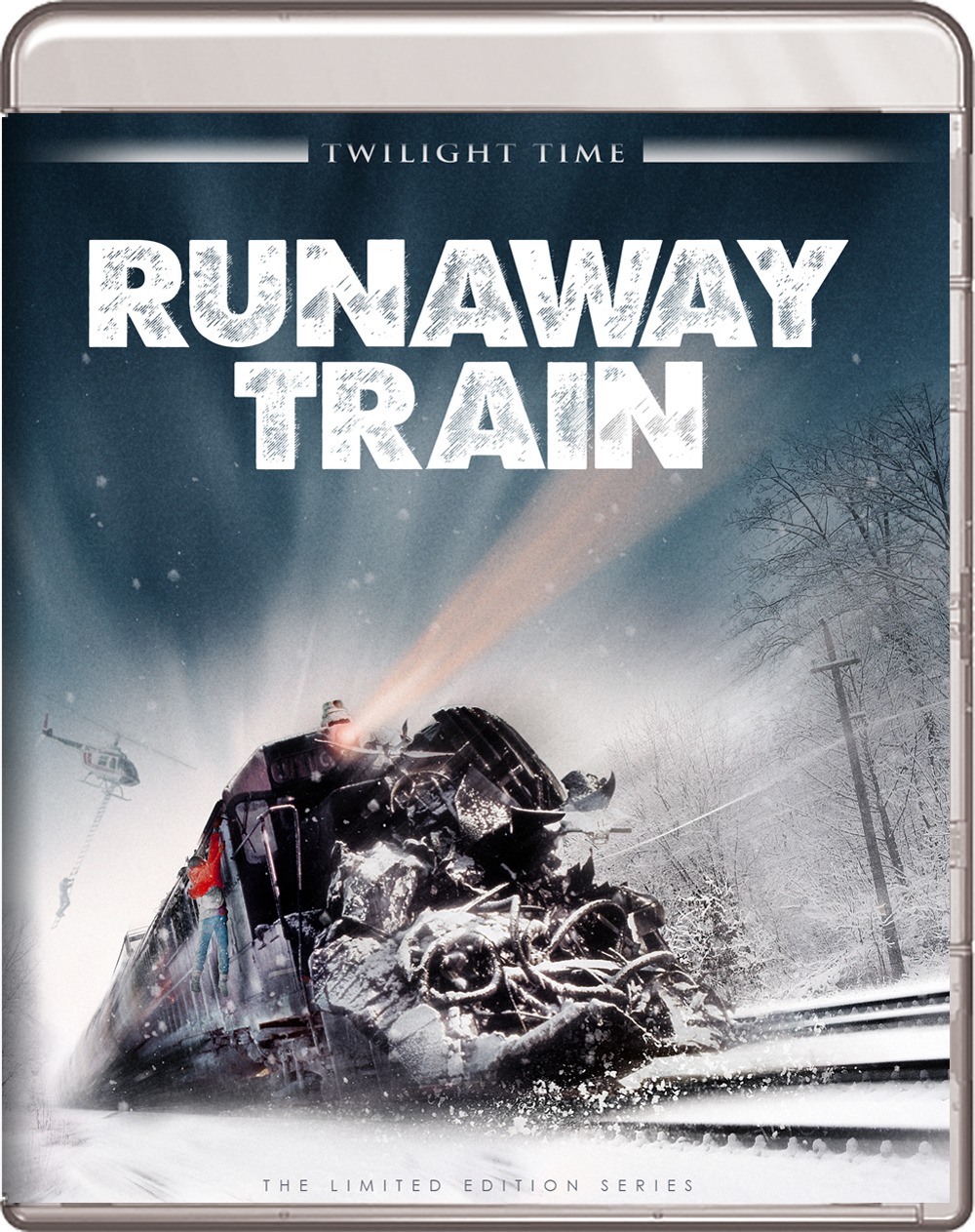