The story goes that after seeing the Western High Noon (1952) together one day at the movies and disliking it, Director Howard Hawks and his friend John Wayne decided to make a better film that showed the camaraderie between a group of men faced with imposing danger. What Hawks created was Rio Bravo, a highly entertaining genre masterpiece that mixed his trademark humor with themes of honor and loyalty amongst professional lawmen. Rio Bravo starred John Wayne as an upstanding sheriff named John T. Chance. 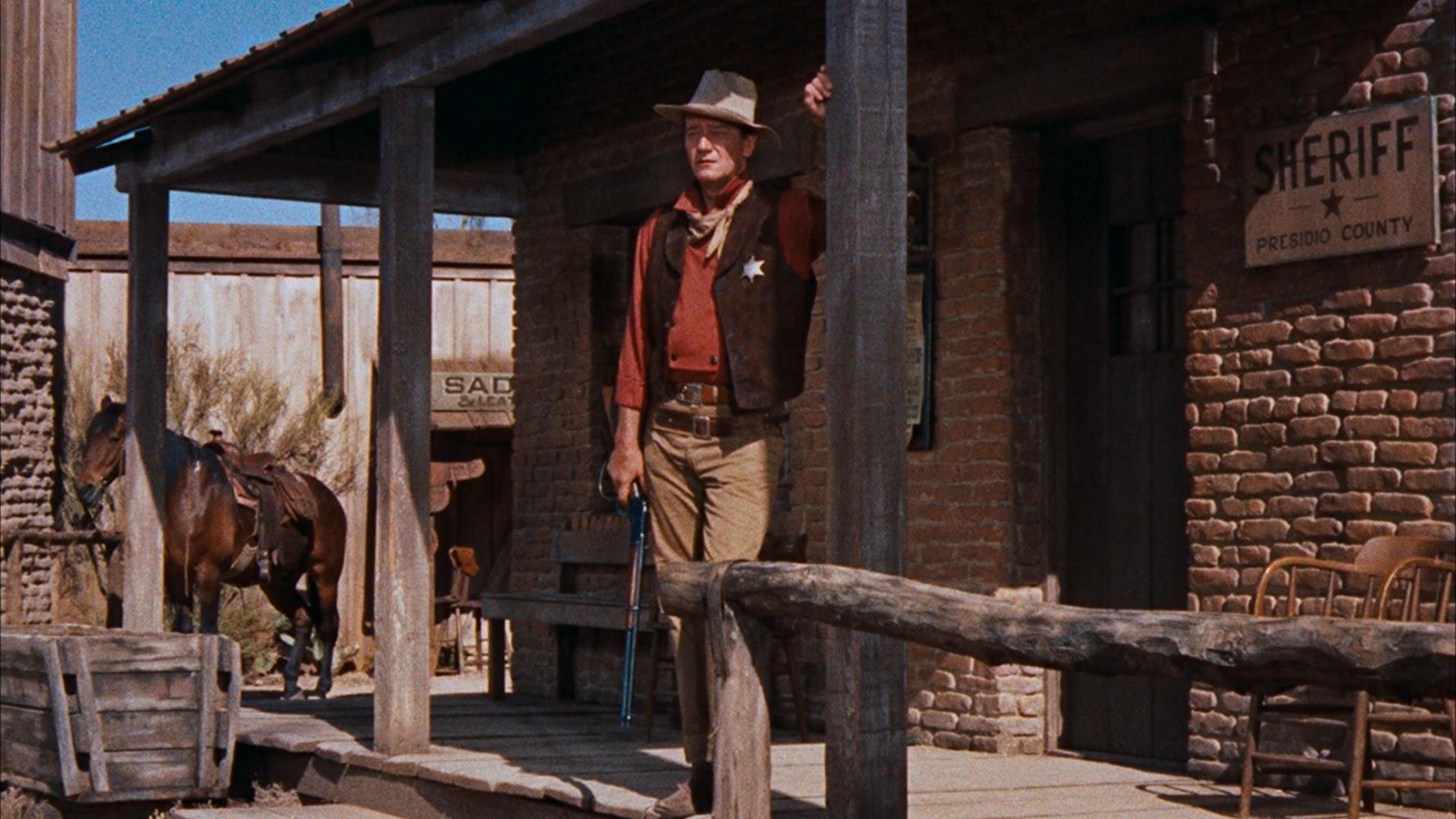 At the opening of the film we meet Chance’s good friend Dude (Dean Martin). Dude is not in a good state, in fact the first action we see is him begging for change so he can get a shot of whiskey. He is a down on his luck drunk and everyone in town knows it. A troublemaker named Joe Burdett (Claude Akin) offers Dude some money, then tosses some coins in a spitoon to humiliate him. Dude needs a drink bad so he gets down to grab the money, but before he can do it, Chance kicks the spitoon away and looks down at him with disgust. Dude lashes out at Chance, but deep down he knows Chance cares about him and wants to help get him back on his feet. Joe Burdett tries to shoot them, but Chance gets the drop and arrests him. Chance brings Burdett to the town jail where he and his deputy Stumpy (Walter Brennan) lock him up. While Burdett is secure, Chance and Stumpy try to help Dude stay off the sauce and to get him cleaned up. Dude is completely addicted and he can’t stop his hands from shaking. The biggest problem facing Chance is Burdett’s gang are going to try anything to get Joe out, so Chance, Dude and Stumpy have to be on their toes every minute. The following day, one of Chance’s old friends, Pat Wheeler comes through town with his group of cattle hands. This is where we meet the super cool Colorado (Ricky Nelson) a young kid who’s the son of one of Chance’s old acquaintances. 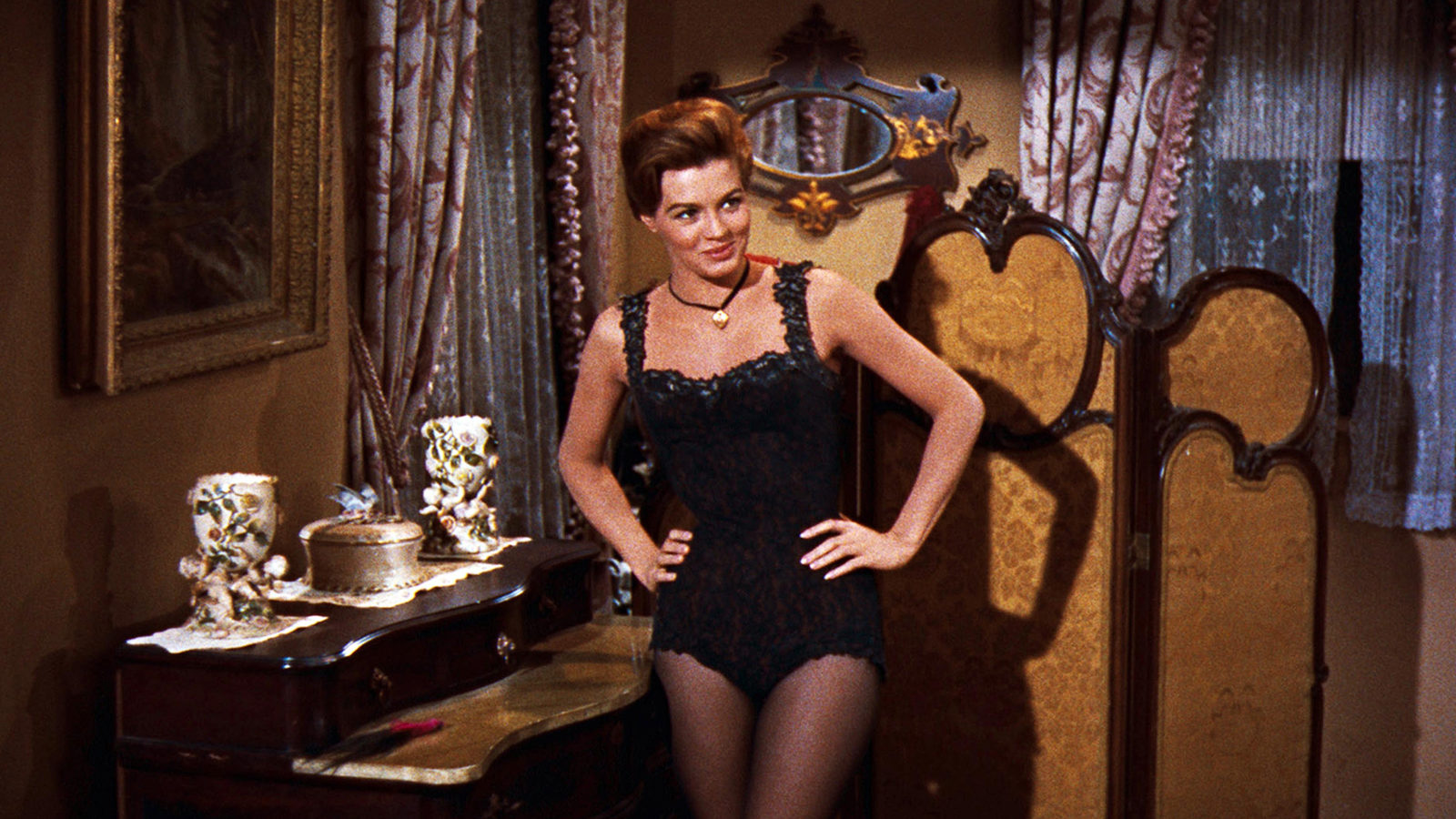 There’s a love interest in almost every Western, and in Rio Bravo, Chance is distracted from his job by a sexy little thing (Angie Dickinson) who’s suspected of being wrapped up in a crime. The group nickname her “Feathers” (for the feather boas she wears). Chance and Colorado find out she’s not a criminal after all, and pretty soon, Chance has fallen head over heels, but we only see this in the form of his anger and frustration with her. The two argue and Feathers does her best to get under Chance’s skin. 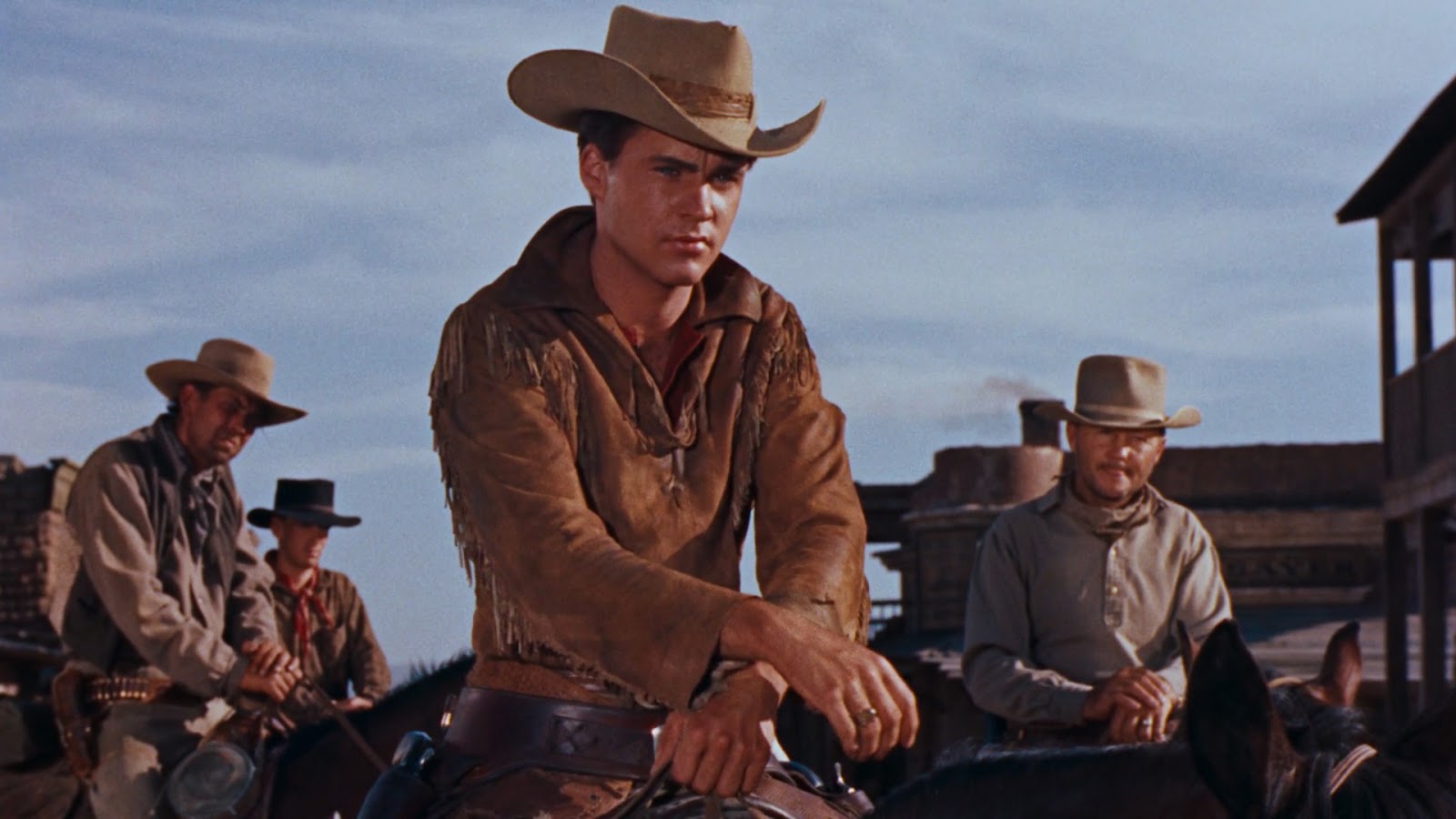 Burdett’s men use every chance they can to bushwhack Chance and Dude. While in town, Chance is taken off guard and he is outgunned. Luckily, Colorado notices this from inside the hotel lobby and tells Feathers to toss a plant through the window when he says so. When she does, Burdett’s men are distracted just enough so Colorado can throw Chance a gun. They both open fire and take Burdett’s men down. Now, Colorado has made it clear that he can handle himself well, so he is deputized. While the men hold up in the jail waiting for the State Marshall to arrive to pick up Joe Burdett, we get to hear some sweet music from Colorado, Dude and Stumpy. They sing some old time tunes and it gives us a break from the tension caused by their dangerous situation. 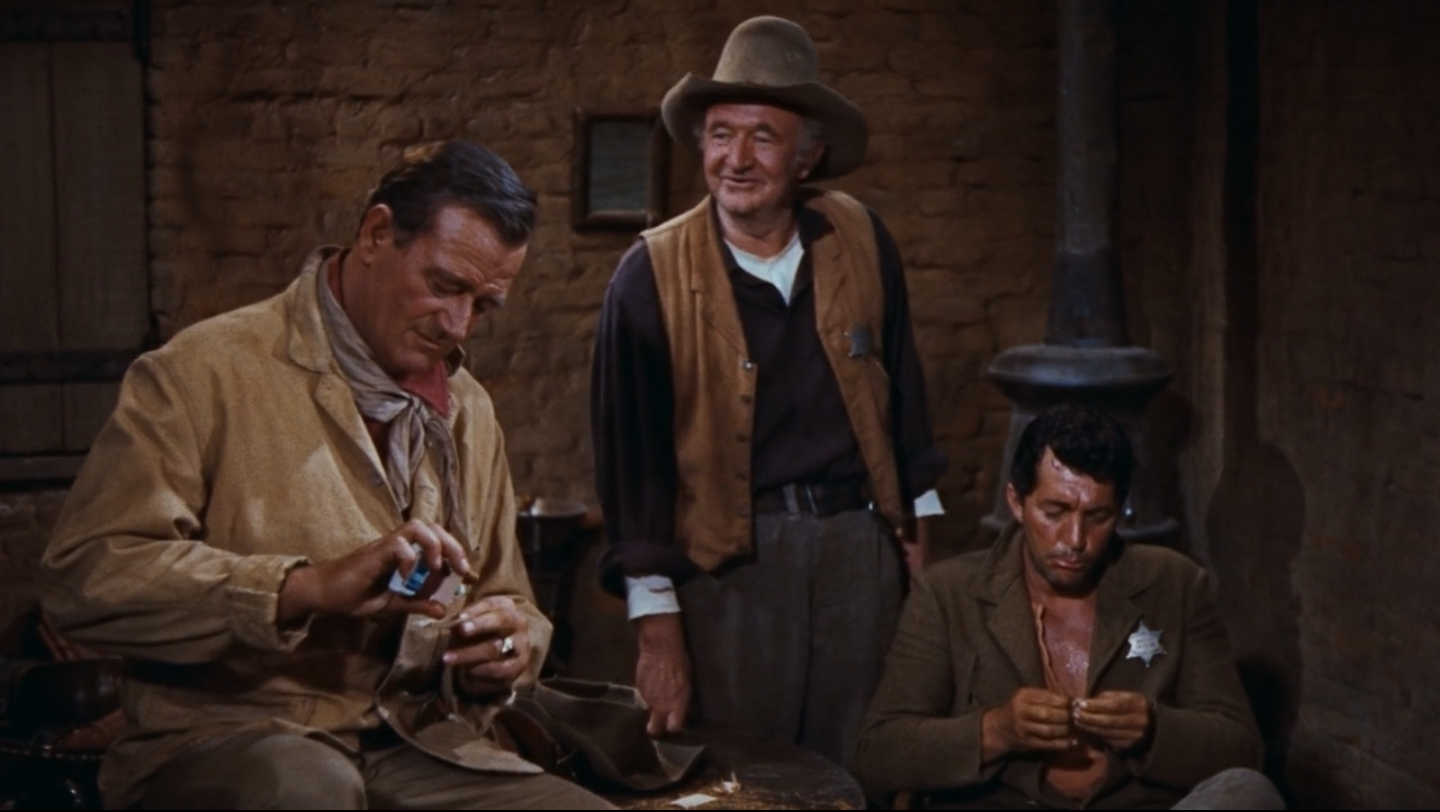 When this film was made Ricky Nelson was a huge sensation (from his time on Ozzie and Harriet) second only to Elvis in the teen heartthrob world (Elvis actually almost got the role of Colorado first). Dean Martin is as cool as ever even while he’s playing a mean drunkard. Several times in the film he loses his temper, but he’s still always there to help his good friend Chance at every step of the game. 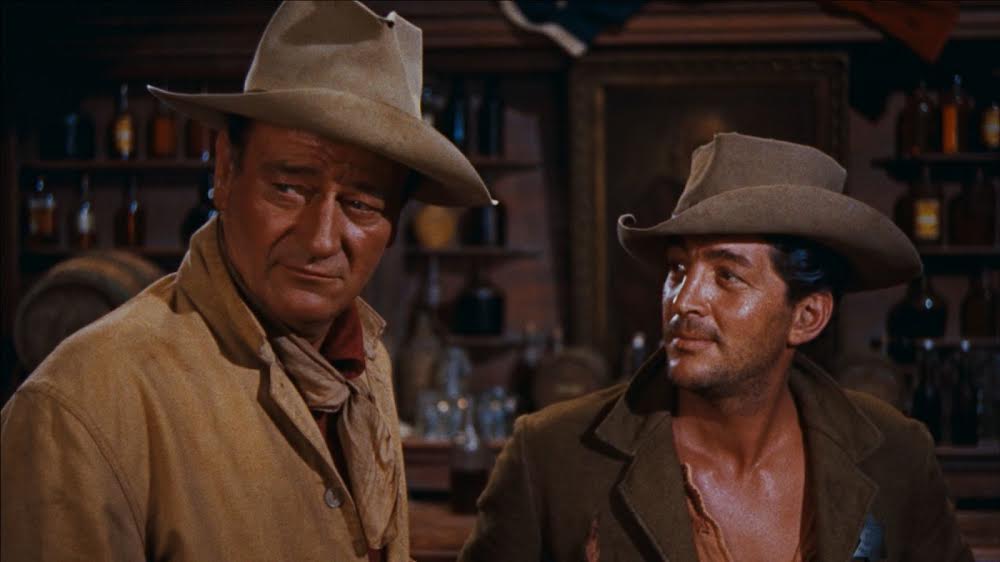 Another thing that makes Rio Bravo unique is the fast paced, witty dialogue written by Leigh Brackett and Jules Furthman. It sounds particularly natural the way the characters argue and bicker with each other. It gives the film a genuine, realistic quality and also provides a lot of humor, especially from the Mexican hotel owner Carlos who speaks very fast and Walter Brennan as the old loudmouth codger Stumpy. Their collective ramblings and outbursts throughout the movie are really comical. 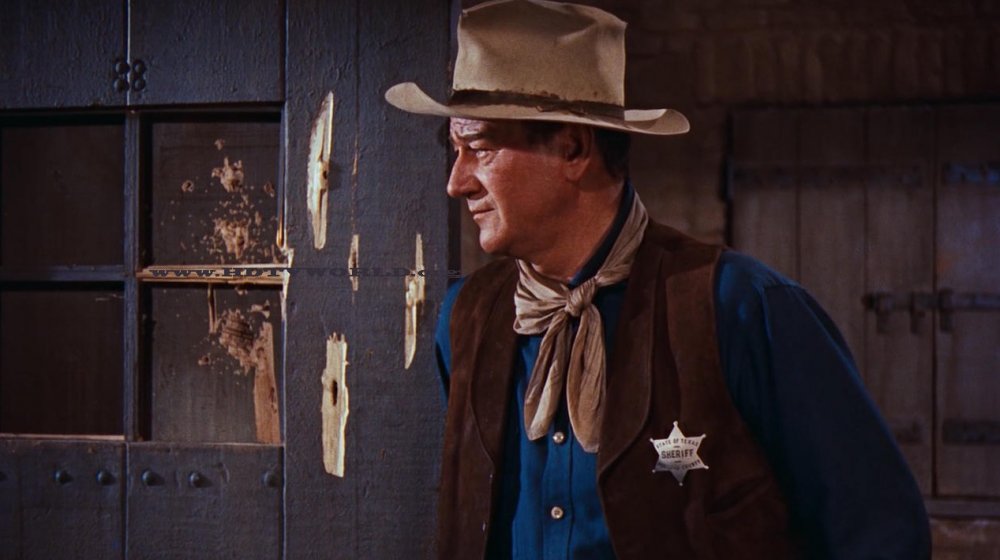 Howard Hawks didn’t create a lot of flash with his direction, instead he opts for a simple approach, keeping the camera mostly at eye level and shooting the film more like a stage play set in a Western town. The action that happens in the film occurs very quickly like rounds from the guns that are fired. Look for the sequence where Dude shoots one of Burdett’s men and trails him into the local saloon. This is one of the best scenes in a movie filled with great scenes.

Rio Bravo remains a timeless film that every Western fan will surely enjoy. It gets our highest recommendation!

TRIVIA: The basic premise for Rio Bravo was remade twice with Hawks’ El Dorado (1966) and Rio Lobo (1970). Both starred John “The Duke” Wayne.

Director John Carpenter based his cult classic Assault on Precinct 13 (1976) on the premise of Rio Bravo. Hawks is known to be one of Carpenters biggest influences and Carpenter often uses the pseudonym “John T. Chance” when working on his films. Next time you watch his movies, see if you can spot this in the credits. 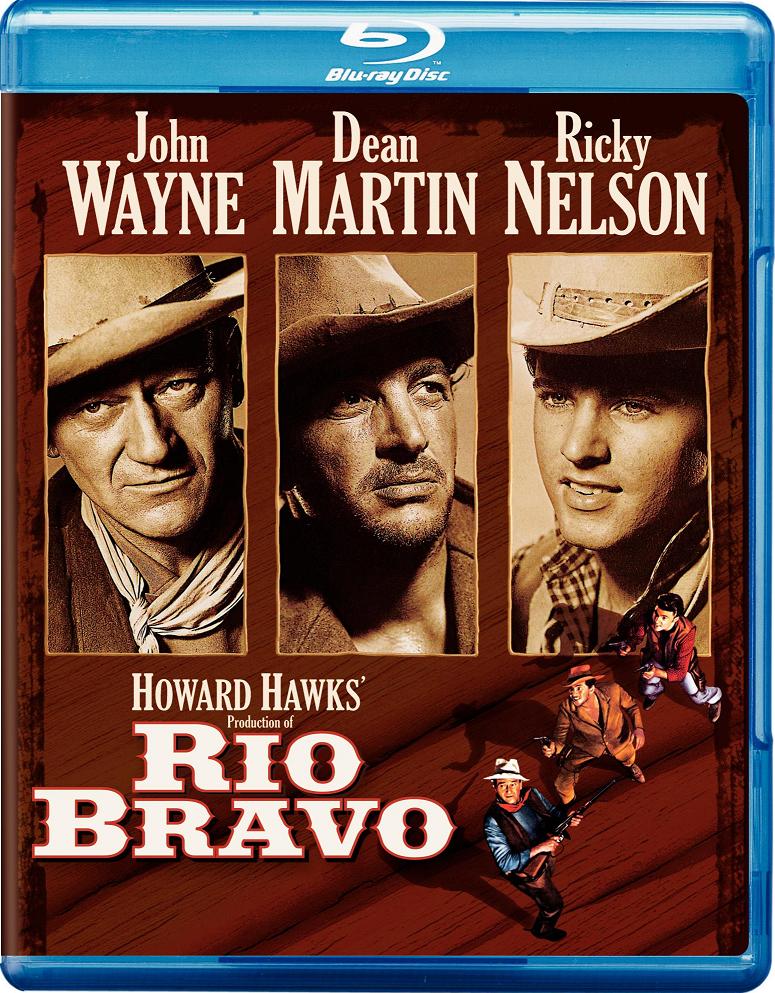