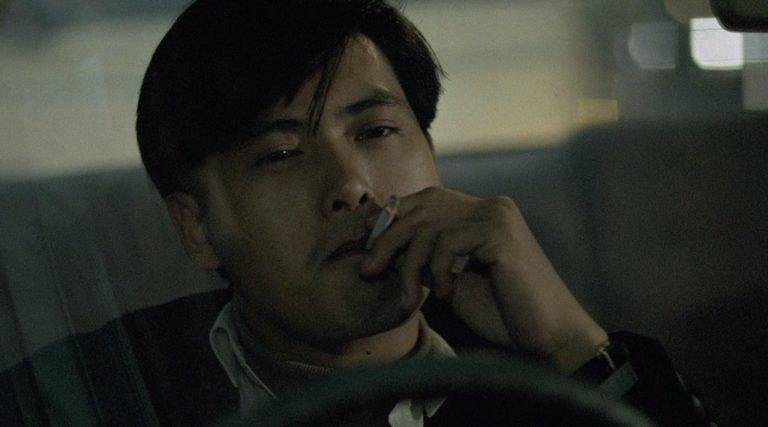 Ringo Lam‘s Wild Search is a Hong Kong crime drama released in 1989. Out of the films of that era, it’s not among the better known movies, at least not internationally. This may be about to change, with a restored version available for rediscovery of this gem.

The movie is about Lau Chung Pong (Chow Yun Fat), who goes by the nickname Mew-Mew, a widowed police detective in Hong Kong who gets a hot tip from his former colleague about a potential arms deal. Him and his partner Nam (Kwon Leung Wong) get ready for the raid, but when the subsequent bust goes wrong not only is the dealer dead, the dealer’s daughter Ka Ka (Cheuk Yan Chan) is now alone and also the only witness. Pong befriends her, keeps tracking the head gangster Bullet (Roy Cheung) who was able to flee the scene, and at the same time falls in love with Cher (Cherie Chung), who is a distant relation to the girl and becomes and involuntary part of the adventure, all the while investigating the big shot gangster Hung (Paul Chun), who Pong suspects to be behind the arms deal…..and who want the little girl dead.

Wild Search takes place in a crime ridden bleak Hong Kong in its late stage British years, around Christmas time. It stars Chow Yun Fat (Hard Boiled, Replacement Killers) in what many have rightfully called a career high and was directed by Ringo Lam (City on Fire, which would be lovely as a Eureka release – you can get a good BluRay here at PlayAsia – and how about Beyond Hypothermia while we’re at it, oh snap the HK movie wish list is long….) who counts among the genre’s biggest names. While the movie does have its violent action moments, this isn’t one of the John Woo type blood operas. It is actually a cute love story with some slight comic relief, tied into a neat crime drama that counts on depth rather than excitement.

Wild Search is one of a few (and hopefully) more Hong Kong classics that have received fabulous treatment by Eureka video (some of the others being Lam‘s Full Alert, Tsui Hark‘sTime and Tide and Johnny To‘s PTU). Why it has flown under the radar for so long is unclear, but I have to say I was rather smitten by the film, its heart and atmosphere and the great performances that adorn it. Call it a hidden gem, or call it an overlooked almost-masterpiece, it is definitely an effort by Lam that deserves new appreciation, a movie that didn’t quite stand out when the wave of Hong Kong movies swepped the island and the world back then, or even with some delay on home video years later.

Eureka’s BluRay I watched in original Cantonese audio with English subtitles, but there is also the version with English dub (which I didn’t check out) which is rather good upon closer inspection. However, the English dub is a bit odd to listen to. I guess it could be worse, as it is rather professionally made and you can hear the effort in making it sound plausible. Considering that the Cantonese dub is de facto also a dub, makes it a bit a matter of taste what you watch. If you grew up with the dubbed videotape then this makes for a more nostalgic albeit less authentic experience. There’s an extra on the disc related to this track as well.the transfer looks fantastic even though it may seem lacking resolution and it struggles a bit with faster movements, as if the noise reduction isn’t quite keeping up.

The image transfer looks fanstastic, the colors and warm tone of the movie really stand out and there’s plenty of detail and film grain to make for a very cinema like experience. If only more Hong Kong movies could be preserved and presented this way.

There are a few very interesting extras there, too. There ‘s an interview with Roy Cheung from 2003 about the movie that’s 17 Minutes long. It would’ve been great to hear more and other people speak about this hidden gem as well. There’s an interview with dubbing voice actor Simon Broad, who dubbed hundreds of Hong Kong movies in the 80s and 90s, so his voice might sound familiar as the go-to voice for Chow Yun Fat. The text info box before you open the interview gives some background about Simon and points out that the English dub for Wild Search is actually been quite rare. This interview is audio only and is played over the movie like an audio commentary. Frank Djeng moderates this, and Chow Yun Fat is also included. Jet Li also? Not really, it’s all Simon. This runs about 70 minutes, so it really is almost like a second audio commentary. Djengs full length commentary then divers really deep into the movie and its context, it’s thoroughly enjoyable and informative and a great addition to this release. The 20 page booklet offers an additional layer of background and context, to Lam, Fat and the industry at the time. All in all, a really nice set of extras. The disc comes in a nice sleeve with new artwork.