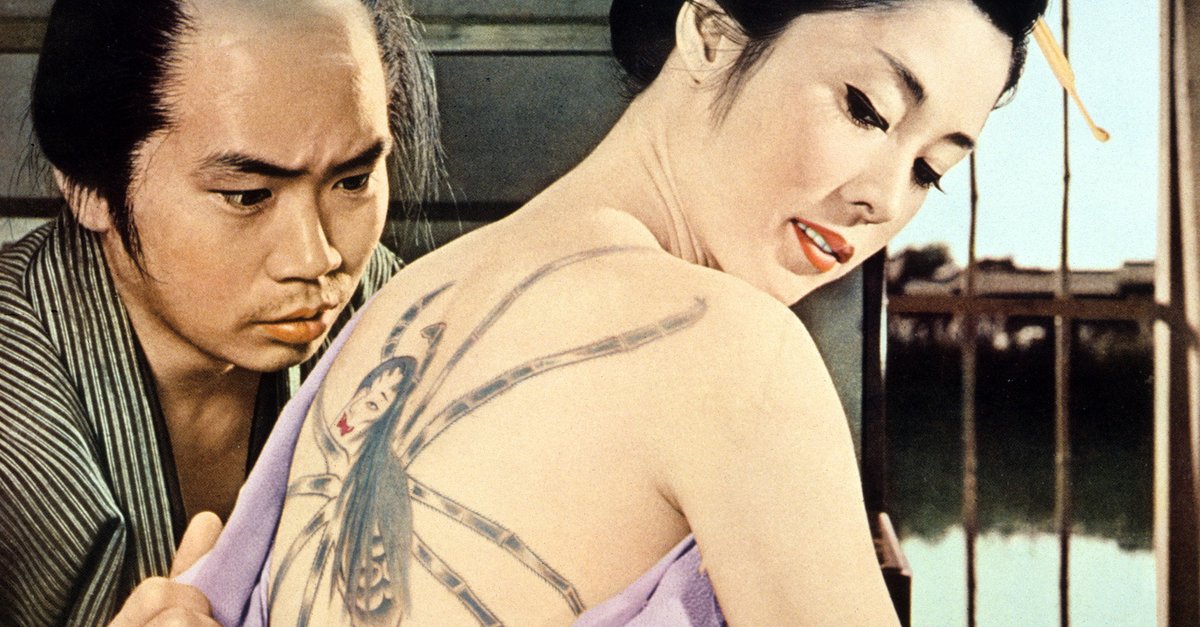 Irezumi (japanese for tattoo), also known as Kiss of the Spider Woman, is a drama from 1966 directed by Yasuzo Masumura (Blind Beast) based roughly on a short story from 1910.

Otsuya (Ayako Wakao), the beautiful and ambitious daughter of a businessman, runs off with Shinsuke (Akio Hasegawa), a timid employee of her father’s. While in hiding, their attempts at getting the respective parents’ blessing for the elopement fail due to the mischief of Serizawa (Kei Sato), who sells her to a brothel as a geisha. There however, she falls victim to the mysterious Seikishi (Gaku Yamamoto) a tattoo artist, who tatoos a man eating spider on heir back. Out of revenge for the betrayal and sale of her to the brothel, or due to the spell of the spider, she sets out for revenge, bending the men around her to her will, causing death and despair, even turning her lover into a killer….

Irezumi is a rather elaborate story for a movie shorter than 90 minutes. At first it seems like we have a story about a creep attacking women, then it is almost a Romeo and Juliet type romance with a terrible kidnapping plot. She is taken to a geisha house, and there we meet a tattoo artist just like the one seen in the opening scene. The art of tattooing here is, or may be, an artistic stand in for rape. It’s a violation of a body nonetheless. But that’s not primarily what th emovie is about, as we learn more about Otsuya and how the spider tattoo may or may not be the main driver of her motivation.

The acting here is stellar and the main selling point of this movie aside from the clever sets and cinematography. Wakao is just radiant, what a screen presence, oscillating between sexy, cruel, cunning and charming. Otsuya’s lover kills because of her ability to manipulate, and that’s not just because of her mistreatment, but may be more in her nature than meets the eye. Otsuya is a master at twisting men around her finger, chewing and spitting them out, playing a devilish whore in one moment and a timid lover in the next. There’s an intensity here, unterlined by the brutal turns of the story that these characters are grappling with. The big irony is that they turn her into a “man-eating” geisha (they being either the prepetrators of her abduction or the tattoo artist casting an evil spell on her( but as audience we are well aware that she had her ways even bevore that, and the hapless Shinsuke may have been but a convenient victim, a means to an end – escape.

In short, I absolutely loved Irezumi and its qualities speak for itself. It comes highly recommended not just for fans of Japanese cinema, but it feels so fresh and exciting (and looks fabulous on BluRay) so I want to recommend it to just about anyone. What a blast of a movie.

The BluRay from Arrow Video presents a fabulously restored version of this classic in a transfer that offers great detail, colors, contrasts and texture. This disc has truly amazing image, looks nothing like its as old as 1966, what a joy to see it that way for the first time. In the audio department you get the Japanese mono audio, which also sounds thoroughly enjoyable. None of that tin sounding hissy crap that marked releases of older movies, here it sounds pristine, offers some depth and sounds true to the original.

There are a number of interesting extras on this disc as well. First of all, there is an audio commentary by David Desser, which is very informative and provides a lot of contemporary and literary context as well as biographical information.

You should however kick it off with the video introduction by Tony Rayns, Japanese cinema expert. It clocks in at ten minutes, it is also very informative and dishes out great contextualization of the film. You can well watch this before watching the movie because it doesn’t give much away, but I always watch extras after watching the movie.

Then there’s “Out of the Darkness”, a new video essay on the cinematographer Kazuo Miyagawa,by Daisuke Miyao which is in English and runs 13 Minutes. It is informative, if a bit academic. The cinematography of the movie is a big deal so this is a suitable extra to check out. Arrow has also included the original theatrical trailer and an image gallery. All in all not a bad package.

This edition comes in a reversible sleeve, with the newly commissioned artwork on one, and the original artwork on the other. For those lucky enough to grab a first pressing edition, that includes a booklet with new texts on the film by Thomas Lamarre and Daisuke Miyao.