One of the subgenres of the Western is known as the Zapata Western and these stories took place specifically during the Mexican Revolution. Some of the most well known titles would include Italian entries like Sergio Leone‘s Duck You Sucker (aka Fistful of Dynamite), Damiano Damiani‘s A Bullet For the General as well as American classics like Viva Zapata! and The Professionals.

The Five Man Army (1969) Directed by Don Taylor stars Peter Graves as “The Dutchman”, an ex-patriate bandit who is hired by Mexican rebels to rob a train of $500,000 to help finance their efforts in the Revolution. The Dutchman, realizing he’ll need help to pull the heist off successfully enlists a group of colorful misfit characters including a strongman (Bud Spencer), an explosives specialist (James Daly), an acrobat (Nino Castelnuovo) and a samurai (Tetsuro Tamba). Their fee for helping him would each be $1000 dollars each. While the robbery goes as planned, it’s not long before the group find themselves fighting for survival against outside forces.

For spaghetti western enthusiasts, The Five Man Army is a dusty gem which combines the Dirty Dozen type men on a mission storyline with a South of the Border political slant. The screenplay was written by Dario Argento who had co-wrote the story for Sergio Leone‘s masterpiece Once Upon A Time in The West (1969) around the same time. Argento would go on to have a successful career himself as a popular director of horror films in the 70s and 80s. Il Maestro Ennio Morricone composed the score to the film and it’s another memorable piece of western inspired sounds. 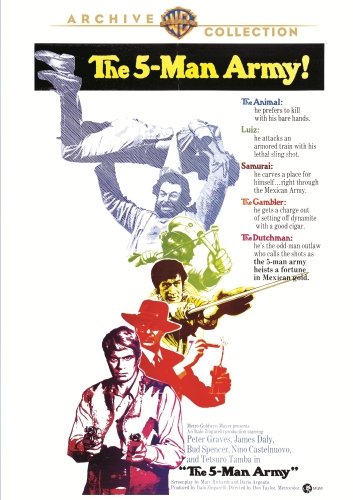 In Ralph Nelson’s action-adventure The Wrath of God (1972), Robert Mitchum plays Van Horne, a robber who goes incognito dressed as a Roman Catholic priest. After luckily being given a reprieve from a firing squad, Van Horne then takes on a mission to kill a bandit for the government. Using his religious disguise as a shield, he makes his way through the countryside to carry out his charge. The film co-stars Rita Hayworth (her final screen appearance due to health problems), Frank Langella, Victor Buono and Ken Hutchison. Composer Lalo Schifrin’s score is a main highlight with its jazzy, funky sounds. Fans of action-adventure cinema should enjoy this film from the director of cult movies like Tick…Tick…Tick and Soldier Blue. 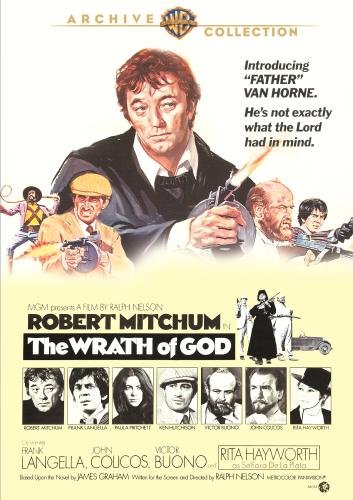