Following the success of his first two low budget Evil Dead films, Director Sam Raimi took his big jump into the Hollywood pool with DARKMAN (1990). The story was heavily inspired by classic Universal Monster movies like Frankenstein and The Invisible Man combined with Phantom of The Opera. This film was one of Liam Neeson’s earliest starring roles and he gives an emotionally stylized performance as Peyton Westlake, a scientist who is badly disfigured at his lab by a sadistic hitman (Larry Drake) and his group of thugs. Westlake manages to survive the attack and comes back to seek revenge using a variety of different disguises he creates from an experimental compound he was working on.

DARKMAN showcased Sam Raimi’s trademark slapstick/black comedy style on a bigger budget (a precursor to Spider Man) and is a really fun, sci fi action revenge film that is now considered a cult classic. The Blu Ray from Shout Factory arrives this December! 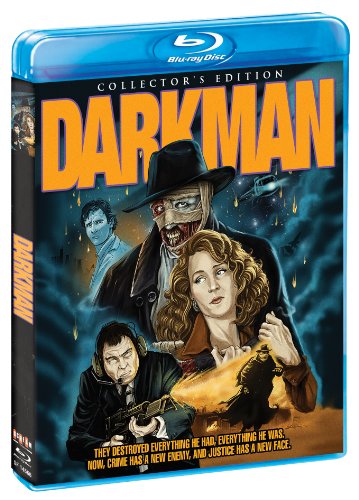