Journey through the nightmarish Outback of WAKE IN FRIGHT

Regarded as one of Australian Cinema’s most famous cult films next to Mad Max (1979) Director Ted Kotcheff’s 1971 psychological thriller Wake In Fright debuted at the Cannes Film Festival where it was nominated for the Palme D’Or and was lauded by a then unknown filmmaker named Martin Scorsese who was in attendance. Since then it has developed a controversial reputation. Many Aussies despise the film for its negative portrayal of the Outback people, for others it’s a wildly captivating, disturbing look inside a subculture that is foreign to most. It could be described as an Aussie version of Deliverance.

The film tells the story of John Grant (Gary Bond) a teacher from the city who gets a new position at a school located in the small town of Tiboonda in the Australian Outback. Since he arrives during the Christmas holiday, Grant plans to visit his girlfriend who lives in Sydney but he has to stop at the mining town of Bundanyabba to catch a train to the airport. When Grant gets to the town, nicknamed “The Yabba”, he encounters a group of strange locals who begin to initiate him into their wild lifestyle of drinking, gambling and hunting. This minor detour turns Grant’s world upside down and begins spiraling deeper into madness and desperation. For decades the only known print of Wake in Fright was located in Dublin, Ireland. The film’s editor Anthony Buckley decided to begin searching for a better copy and finally discovered one in Pittsburgh, PA. It was later restored and first released on Blu Ray in 2009. Following this it was selected by Martin Scorsese, head of the Cannes Jury that year as a “Cannes Classic”. Wake in Fright is now one of only two films to be screened twice at the Festival (the other being Antonioni’s L’Avventura).

On January 15, 2013, Image Entertainment and the Drafthouse Films home video label will re-release the film in hi-definition on Region 1 Blu Ray with special features included. If you’re looking for some furious cult cinema from the 1970s, this selection will satisfy!

“WAKE IN FRIGHT is a deeply – and I mean deeply – unsettling and disturbing movie. I saw it when it premiered at Cannes in 1971, and it left me speechless. Visually, dramatically, atmospherically and psychologically, it’s beautifully calibrated and it gets under your skin one encounter at a time, right along with the protagonist played by Gary Bond. I’m excited that WAKE IN FRIGHT has been preserved and restored and that it is finally getting the exposure it deserves.” – Martin Scorsese 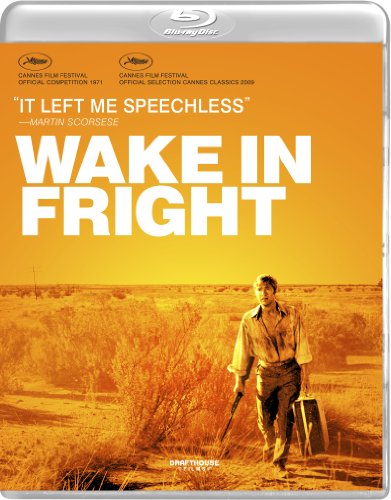