There are always movies that go on to become part of our collective pop culture memory because they hit on certain issues happening when they were made. John Milius’ Red Dawn in particular captured a certain moment in time when the United States and Russia were at the height of the Nuclear Arms race and fears of armageddon were actually relevant. I was 10 when the film was released but even back then I was aware of that the circumstances portrayed in the film were entirely plausible.

The story focuses on a group of smalltown high school age kids who turn into guerilla fighters after Russia and Cuba team up to invade the United States, thus causing World War III. To survive they flee into the mountains outside of their town and hide while they figure out what is going on. What they most want to know is what’s happened to their families who have been caught in the attack and are now behind enemy lines. Most of the older citizens and especially the more rebellious ones have been rounded up and placed into special prison camps while others are killed outright.

Two brothers, Jed (Patrick Swayze) and Matt (Charlie Sheen) lead the group of teen resistance fighters who go by the ferocious sounding name “The Wolverines” (after their school mascot). As they use skills they’ve learned as hunters over the years, they grow into a formidable threat to the Russian/Cuban armies. They bushwhack convoys, destroy camps and depots and do their best to keep the American spirit alive and well in the face of oppression.

John Milius (Apocalypse Now, Conan The Barbarian) not only delivered a solid action-adventure-war film but was also able to show the horrible psychological effects the exhausting battle has on the kids. We get to see firsthand the agony of living under a constant state of conflict and how it changes and warps them, ultimately stealing their innocence as human beings.

The original Red Dawn has a stellar cast of actors including Jennifer Grey, C. Thomas Howell, Lea Thompson, Harry Dean Stanton, Darren Dalton, Powers Boothe and William Smith. The rousing score by Basil Poledouris is one of his best, it’s truly a memorable work that captures a pure American sound. It will be released on Blu Ray in October. Make sure to pick this furious 80s classic up!

2012 REMAKE: The new film is directed by Dan Bradley and stars Chris Hemsworth (The Avengers) and Josh Hutcherson. Personally, I don’t see it being anywhere as good as the original but how many remakes are these days? 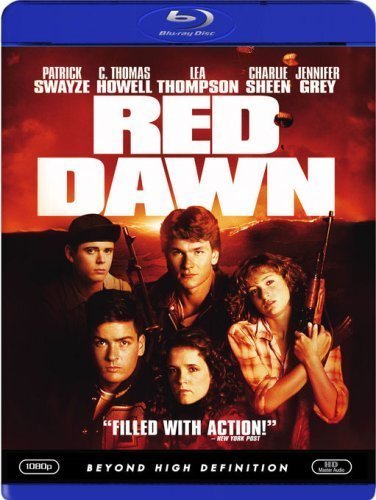