This year marks the 40th anniversary of Elvis Presley’s death. To pay tribute I’ve reviewed This Is Elvis a 1981 documentary film that’s surprisingly better than what I expected since it shows many interesting aspects about the man, the myth and the legend. 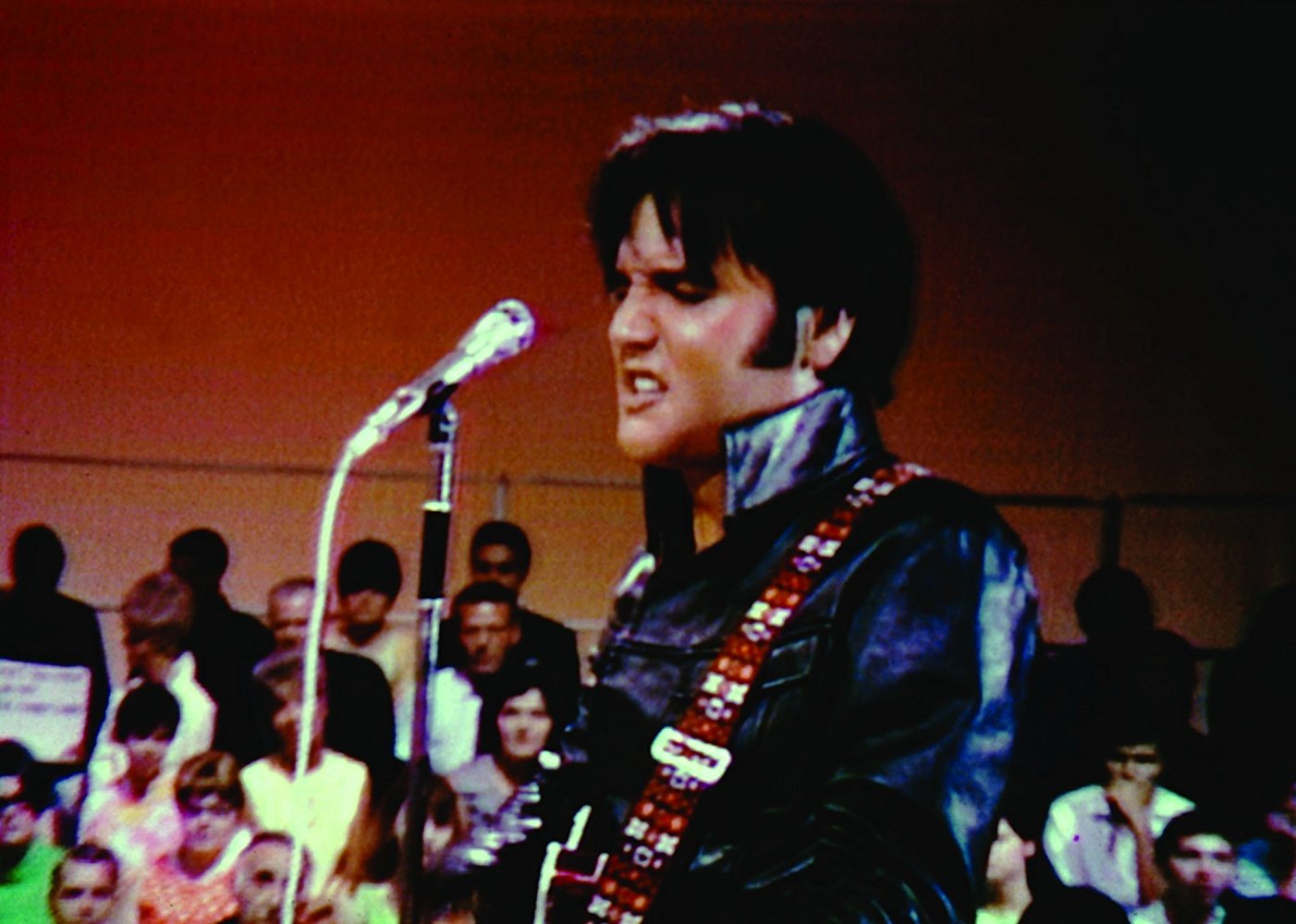 Before I talk about the film, let me tell you my personal story about getting into Elvis. Back when I was young, I never liked the guy. I thought his music was filled with lots of cliches and his deep voice was a little bit laughable. But a couple of years ago I discovered a song “Elvis Is Everywhere” by Mojo Nixon & Skid Roper. It was humorous and kick-ass at the same time. Surprisingly, the song sparked my interest in the King again and I started listening to his music like the NBC ’68 Special, the complete Sun sessions, and his first albums. I was blown away and couldn’t believe how good these albums were. The up tempo numbers were fun and cheer you up whenever you hear em, while the slow songs keep you calm at their best. That said, it might be easier nowadays to buy and collect his work since there’s a report that his records and memorabilia have had a downturn in price due to many factors. Who knows? I might even get those vinyl albums that I mentioned in the future.

Anyway, since I knew only parts of his biography and some of his songs…it made me curious to see his life from beginning to the end. This Is Elvis does a surprisingly good job of covering his career. After the re-enactment of his last day, we see yet another re-enactment of his childhood and young adulthood when he was interested in Blues music. From that point, the film combines lots of footage from different parts of his career with live performances, his hit records and a voiceover narration.

Let’s start with the subjects that I like in the film. It does a good job with editing and story pacing since there’s no boring moments, even those who’ve never heard of Elvis before can learn about his life and enjoy his work. Some parts have the “no apologies” attitude towards Elvis fans, especially in the final part when the King became a drug addict (probably a result of a mental breakdown after his divorce). We see a news conference of his ex-bodyguards and they tell us about Elvis’s health conditions. Although the “Elvis” narration (we’ll talk about this soon) tells us that the King felt betrayed by people he used to trust, it makes me wonder about their motivations and conflicts behind the scenes. Well, I googled it and it turns out that one of the reasons why these guys were fired was that they warned the King about his heavy drug usage. So after they got kicked out of the job, the guys released a book called “Elvis: What Happened?” which details how drugs destroyed his life. Meanwhile, Elvis claimed that they were fired as a result of a business cutback. Whether you believe Elvis or the ex-bodyguards, we can’t deny that the substances probably ruined his health and his ability to perform in public. Shortly after that, we see a legendary infamous performance in Nebraska. It’s said to be one of his last concerts…and, sadly, you can clearly see why. A controversial clip of him singing “Are You Lonesome Tonight?” shows us why this number was cut from not only the CBS airing of the concert, but also some DVD releases of This Is Elvis as well since his fans find it to be offensive. I have to disagree since it illustrates what went wrong with the act during his last year. From a totally nervous speech in the beginning to incoherent speaking parts in the middle of the song, it connects to the previous parts of the film about his drug use and its effects. 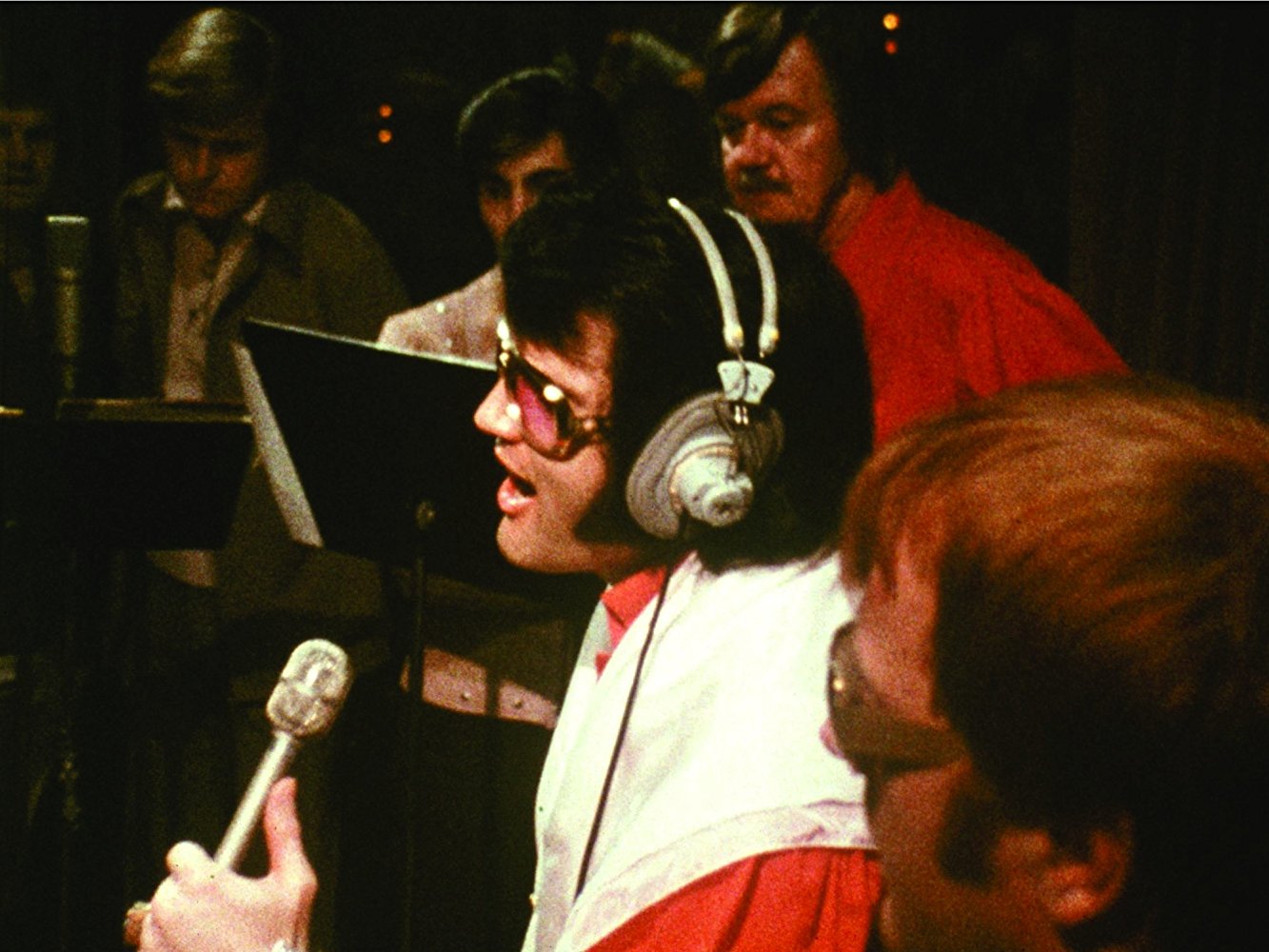 But the film doesn’t only tell us about the dark side of his life, there are several portions where we see him as a fun and humorous guy. Another controversial scene that was edited out of some DVD releases is the deleted scene from the Elvis On Tour movie. It’s when he says this to the crew…

“Remember that girl from last night? She gave great head! […] Greatest head I’ve ever had!”

I don’t think it’s that offensive, but, instead, this and other sequences were put there to show the fun and “let’s have a good time” attitude of the King himself, and not to be taken seriously.

Speaking of footage, the film is not only filled with his performances and rare home movies (which gives us an interesting insight in his private life), but also stock footage, newsreels, and TV clips to show the impact of “Elvis Mania”. There are three examples of montages that I considered to be well-made. The first is when Elvis’s popularity started climbing in the 50’s. We see several talking heads who opposed the dangerous trend of Rock music. There’s the DJ who smashes Rock and Roll records in front of the camera (I realized later that the station forced him to do this stunt since they were about to change its format…and he hates the stunt too!) and there are several people who state Rock and Roll music is “n*gger music”. This stuff is hilariously over-the-top. At first, I thought these were more re-enactment bits as well, but then I remembered that Jello Biafra talks about this subject on one of his spoken word albums called “High Priest of Harmful Matter: Tales from the Trial”. He tells us that back then there was censorship on black people’s music and the only way to hear the music was to pray that, someday, white artists would cover it. Plus, the Rock music was labeled as “jungle music” (not to be confused with another genre of 90’s dance music that shares the same title) or “negro music”. In fact, there was a leaflet that warned children about the danger of listening to this kind of music….

The screaming, idiotic words, and savage music of these records are undermining the morals of our white youth in America.

Call the advertisers of the radio stations that play this type of music and complain to them!

Don’t let your children buy, or listen to these negro records.”

Wow. Elvis had to face not only these kinds of protests, at one point he was filmed by the police since his performance was considered “obscene”.

The next montage that I like is a compilation of his films set to the song “Too Much Monkey Business”. Before it begins, we see Elvis walking around the world fair to film one of his movies. Then, our “Elvis” narrator kicks in…

“After a while, the movies I was making became so similar it’s hard to tell one script from the next. […] Colonel Parker [Elvis’ manager] was up to his old pranks again. He gave me award for my challenging roles: a ham.” 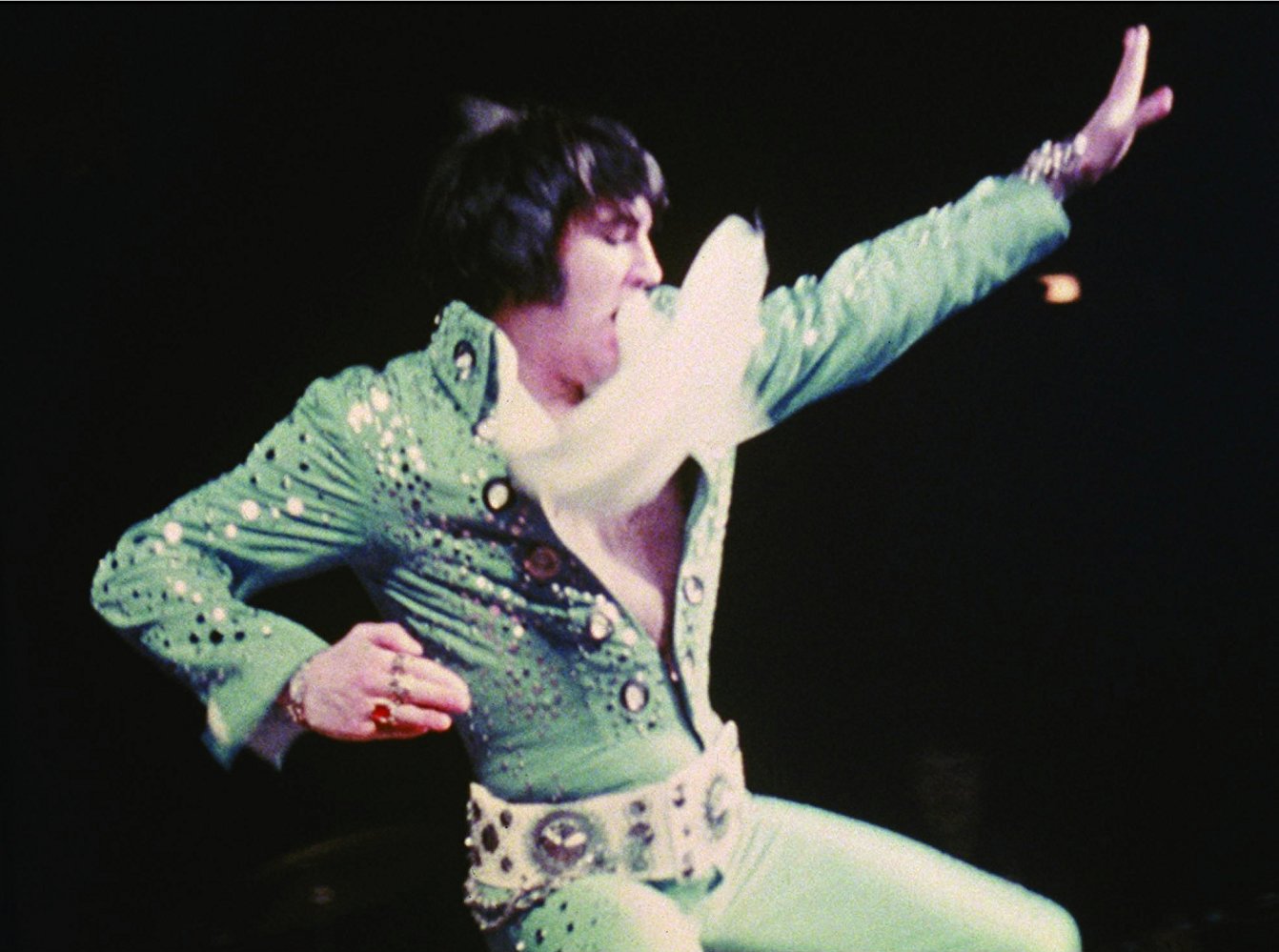 Then it cuts to a hilarious montages from different Elvis films. It highlights hilariously bad moments of his filmography. The most memorable one is when he karate-chops a leopard! It’s goofy and awesome at the same time. After this, it leads to another montage of The Beatles (with “I Wanna Hold Your Hand” playing in the background. I didn’t expect to hear his competitor’s music in this film, to be honest) and the Beatlemania craze in US. Here’s how “Elvis” narrator reflects…

“While I was making those silly movies, The Beatles were conquering America.”

Then, we see Ed Sullivan say…

“We just received a wire…from Elvis Presley and Colonel Tom Parker wishing them a tremendous success in our country.”

To tell you the truth, I doubt the generosity of that quote, considering that when Elvis met Richard Nixon later on, he said the Fab Four were an anti-American group and were drug users. 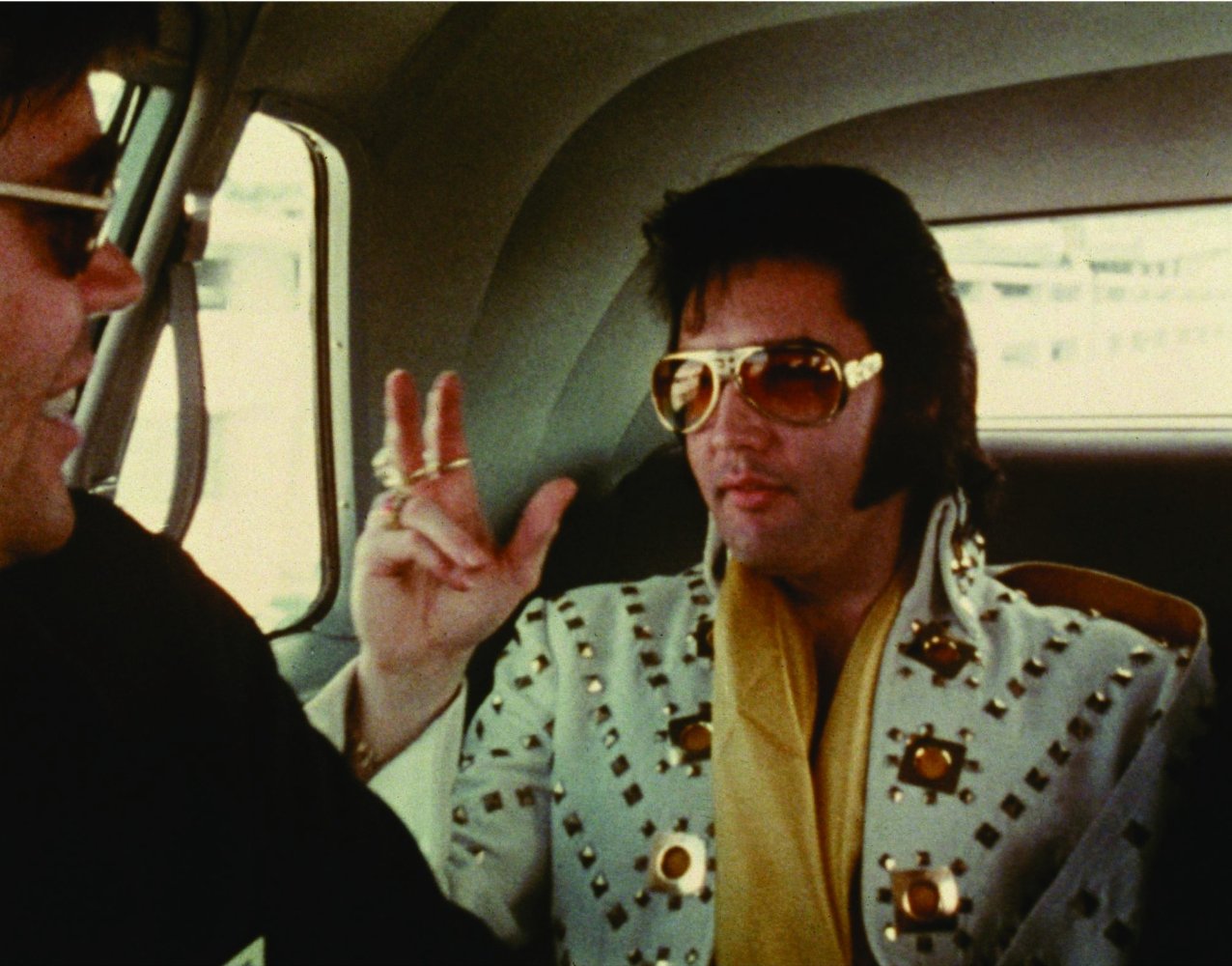 Now it’s time to talk about the narration and other things that I don’t really like. There’s a reason why I have to put quotations on the “Elvis” narrator. It’s because this guy isn’t Elvis himself. He’s Ral Donner, who narrates the film as if he was Elvis. Also, there are other sound-a-like narrators for Vernon Presley (his dad), Gladys Presley (his mom), and Priscilla Presley (his ex-wife) as well. With this many “fake” narrators, I’m not sure how honest or accurate the opinion of each person is. And speaking of re-creation, I mentioned before that there are three re-enactments of his life. This not only looks pretty cheap like a TV movie, some of them have jaw-dropping moments. In the extended cut VHS release there’s a scene in which “Ginger Alden” (see quotation marks?) his girlfriend at the time, finds Elvis dead in the bathroom. Is this scene necessary? I don’t think so. I mean, in the theatrical cut we see Colonel Parker (we never see his face since he’s stand-in. Kinda cheesy, but classier than the Elvis death scene) pick up a phone and receive bad news from his friend. There you go! That’s a smarter way to convey the same message to the audience.

Another thing I’d like to point out is overdubbing and sound effects. This Is Elvis was released in Dolby Stereo (it was a novelty back then), so the film tries its best to add stereo sound in as many scenes as possible. Some of them turn out to be annoying to me like the Ed Sullivan performance. In the original clip, the audience remains silent for the most part and screams at the appropriate moments, but here…they scream, laugh, or make a “woo!” sound every three seconds! They probably added it to make the clip similar to the legendary Beatles performance on the same TV show, but in that one the screaming isn’t that loud. This one, however pulled my attention away from Elvis’s performance since the sound is too annoying.

In the end, this film is an interesting introduction for young people or Elvis newbies. Fun, informative, and a mostly honest perspective about his fame and the price he paid. Although it has cheesy elements, when you see the My Way montage during his funeral it will probably make you sad or even cry since This Is Elvis makes you realize how talented and generous he really was.