Quentin Tarantino’s ONCE UPON A TIME IN HOLLYWOOD

Hollywood, 1969. Rick Dalton (Leonardo DiCaprio) former star of the hit NBC TV Western series Bounty Law (1958-63) is on the ropes. His career could’ve taken off like Eastwood and McQueen’s but due to a string of mishaps and bad calls (mostly by his own hand) he’s been left taking guest roles on other peoples shows. With his glory days long gone, he’s developed a stammer. He also smokes too many Red Apples and drinks too many Whiskey Sours. His only smart option, according to his new agent Marvin Schwarzs (Al Pacino) to get back on top, is by journeying to Italy to star in a few popular spaghetti westerns. The problem with that is Rick hates those movies and considers them to be junk. Riding on his frayed coattails is best pal Cliff Booth (Brad Pitt) a WWII war hero turned stuntman with a bad reputation and a shady past. At this point, if Rick doesn’t work, Cliff doesn’t work so he’s been relegated to a mere gopher, chauffeur and handyman to make some extra cash on the side. While Rick enjoys his cool bachelor pad digs up in Benedict Canyon (complete with full bar, inground pool and awesome movie posters), Cliff lives in a dumpy trailer (situated conveniently next door to the Van Nuys Drive-In) with his pet pooch, the lovable brown pitbull Brandy (played with pup panache by Sayuri). You can almost smell the aroma of Kraft mac n cheese and Wolf’s Tooth brand Raccoon Flavored Dog Food as the two chillax together. 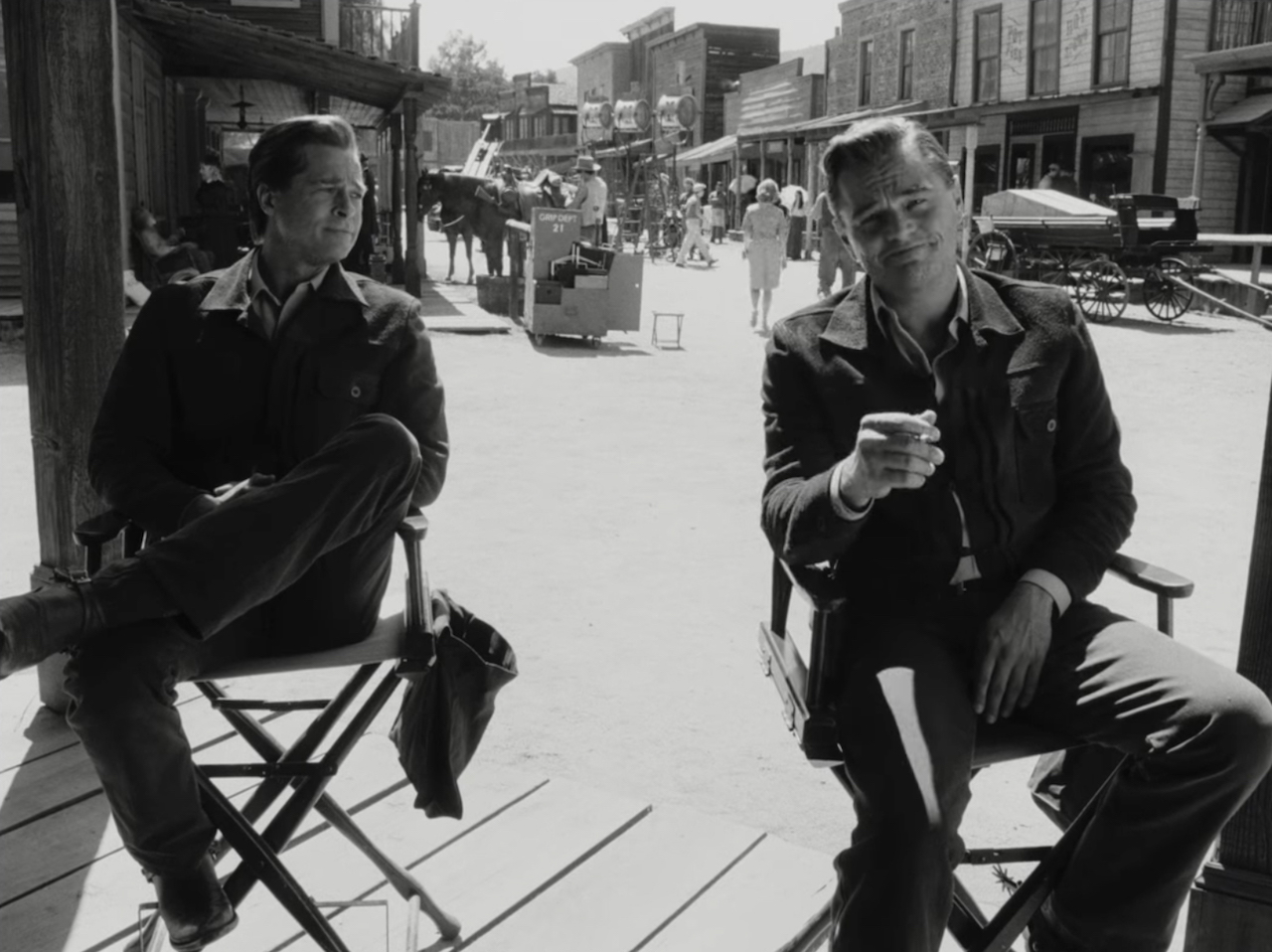 Rick’s new next door neighbors on Cielo Drive just so happen to be the hottest director in town, Roman Polanski (Rafał Zawierucha) fresh off Rosemary’s Baby, and his beautiful wife Sharon Tate (Margot Robbie) star of Valley of The Dolls. Whenever Sharon enters frame in the movie she radiates a positive and beautiful energy. We get to see her daily life up close and how open she and the culture was in the 60s. Things like picking up hitchhikers was not a no no at this time. When shopping around Westwood Sharon notices her new film The Wrecking Crew is playing at the theater and she gleefully gets a free admission from letting the box office girl know who she is. Her giddy enjoyment watching herself on the silver screen becomes ours too. More Hollywood high life excitement comes when she and Roman attend a bash at Hef’s Playboy mansion where they meet pals Steve McQueen (Damian Lewis), Jay Sebring (Emile Hirsch) and Mama Cass (Rachel Redleaf). Damian Lewis only appears for a few minutes but his take on The King of Cool is a great moonlit moment that makes you think Ol Steve is back with us. 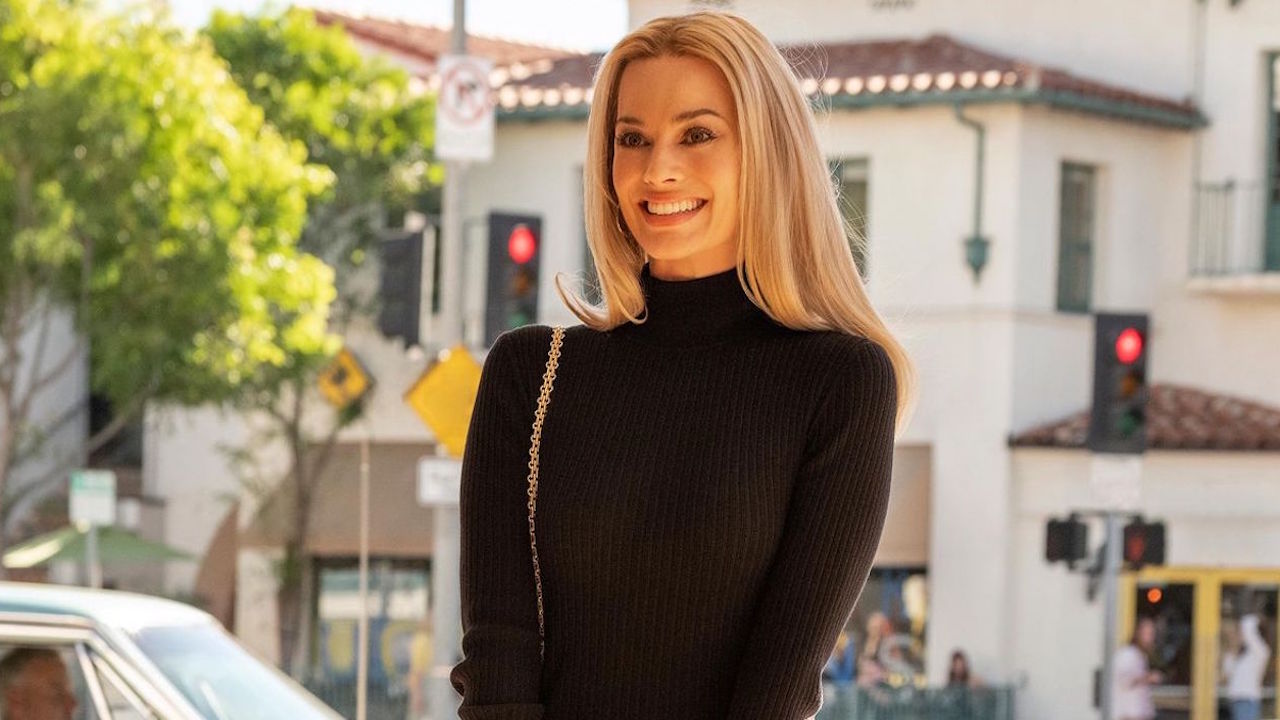 Through some quick flashbacks we learn more about Cliff’s sordid past. When Rick gets a guest spot on the TV series The Green Hornet he brings his pal along in hopes he can have him do the stunts, but lead stunt coordinator Randy (Kurt Russell) and his firey wife Janet (Zoe “The Cat” Bell) dislike Cliff because of something very unsettling he was “accused of”. With some flim flammery, Rick changes Randy’s mind for the time being. But like clockwork Cliff gets in hot water when the co-star of the show, a cocky guy named Bruce Lee (Mike Moh) begins popping off about fighting. Cliff somehow ends up in a fisticuffs with him and before long has tossed poor Bruce into a car leaving a large dent. This scene has caused a lot of controversy due to how Bruce is portrayed, which is not the shining Enter The Dragon hero version you’d expect to see. Cliff’s foggy 1966 recollection of a non world famous, pompous Bruce Lee is what we get instead. When the two warriors spar, they both hold their own but we never see the true outcome since the match is cut short. 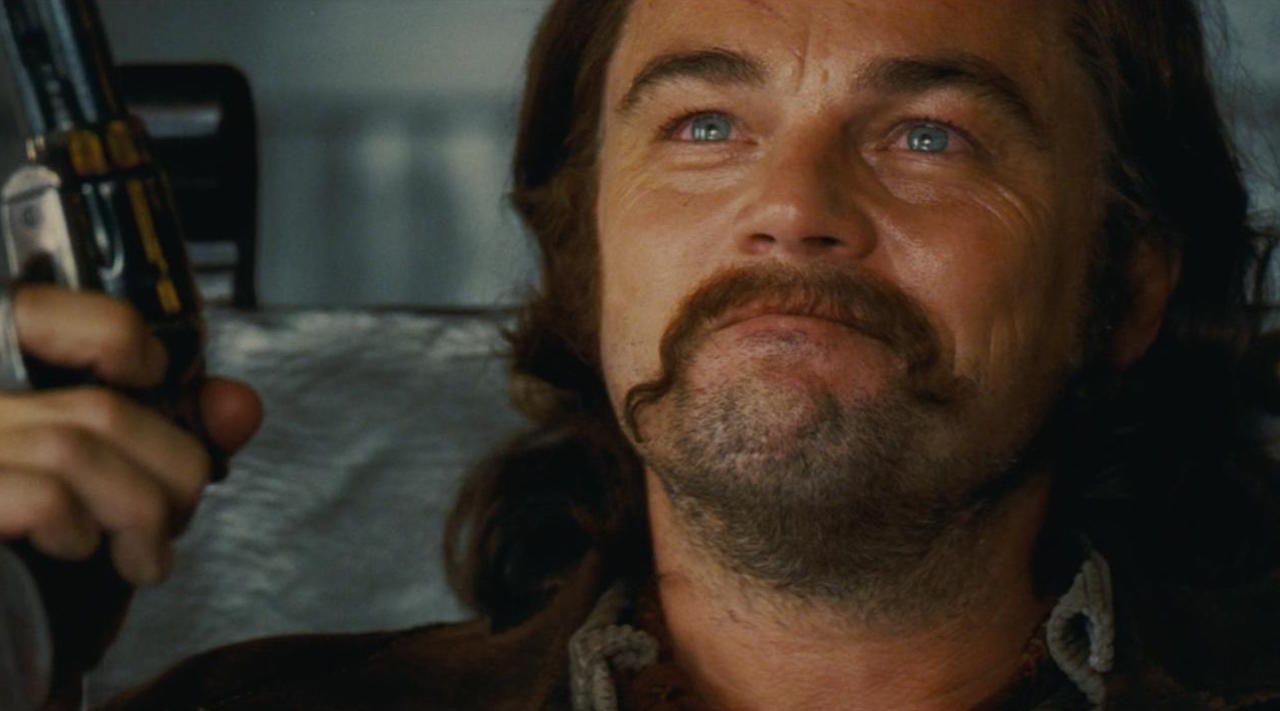 Rick’s latest job is on the popular TV Western LANCER. His part is Caleb DeCoteau (pronounced Day-Co-Too), the heavy. It’s here we see just how much turmoil he’s in psychologically. First when Director Sam Wanamaker (played by the first live action Spider Man, Nicholas Hammond) develops the look of his character. Instead of the classic prim and proper costume he would wear on Bounty Law, a new style, complete with counterculture touches (coat with tassels, foppish long hair and fu manchu stashe) is suggested. Rick is clearly not onboard but is trying to battle through a bad hangover and remember his lines. In one of the finest scenes in the movie, we go right inside the episode and witness Rick acting against James Stacy (Tim Olyphant) as the mysterious Johnny Madrid Lancer. A professionally minded child actor Trudi (Julia Butters) who befriends and consults Rick is playing one of the Lancer Clan. What begins as a total catastrophe for poor underdog Rick (who has a crazed meltdown after flubbing his lines) becomes one of his most invigorating acting moments in years and a glimmer of hope returns to his bloodshot eyes. 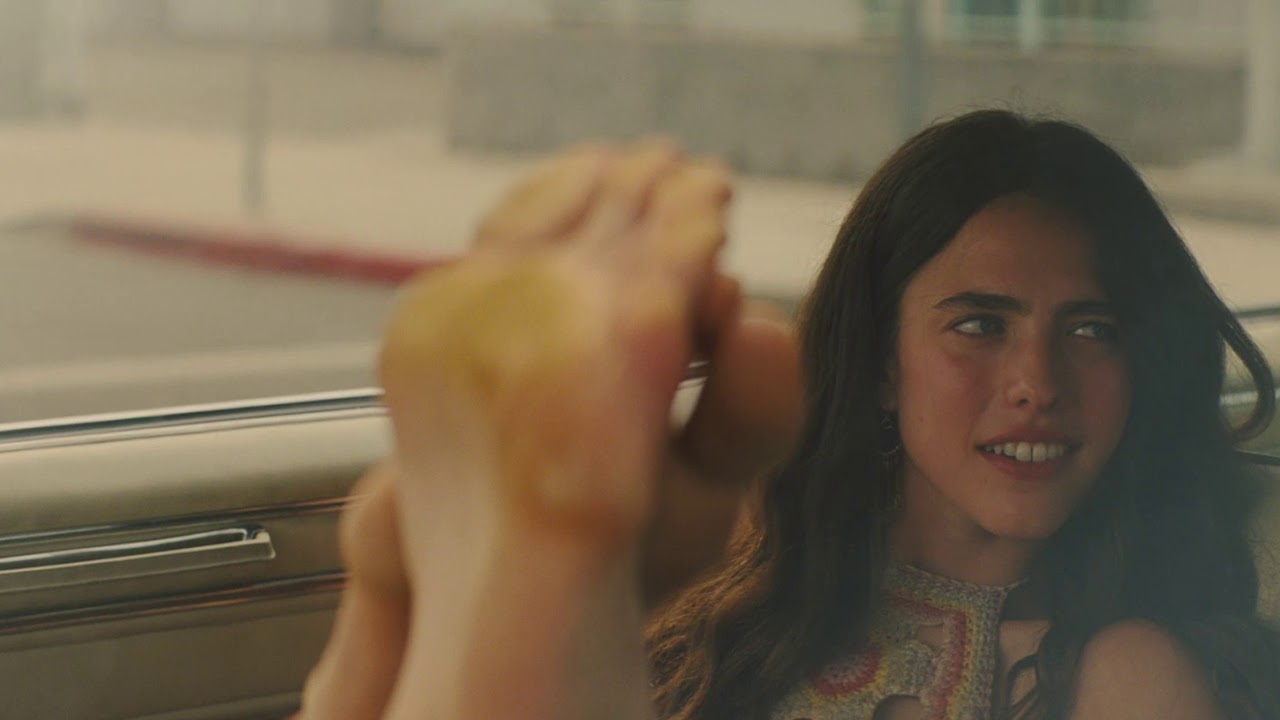 One of the film’s most creepy sequences takes place at Spahn Ranch where Cliff’s new hippie friend Pussycat (Margaret Qualley) a hitchhiker, lives with the other young followers of the mysterious Charlie Manson (Damon Herriman) whom we only get a very brief glimpse of. Cliff just so happens to be an old acquaintance of the ranch owner George Spahn (Bruce Dern) since he shot episodes of Bounty Law there years earlier. The atmosphere isn’t as friendly as you’d expect from the grungy hippie youths. Instead an air of dread permeates the intensely bright sunny space like we’ve suddenly entered The Texas Chainsaw Massacre. Cliff is introduced to the other kids like Tex (Austin Butler) and Gypsy (Lena Dunham). As he inquires more about George, he is met with aggressive vibes which lets him know things are amiss. At the front door of George’s ramshackle home, he encounters a young girl named “Squeaky” (Dakota Fanning) and can see in her blank, pale face and demeanor somethings rotten in Denmark. Things soon take a violent twist when upon leaving, Cliff notices one of the dirty longhairs Clem has punctured one of his car tires. Unlike a similar scene in Rebel without a Cause, there is no duel, Cliff swiftly smashes the dirty hippie’s face and orders him to fix the tire or else. 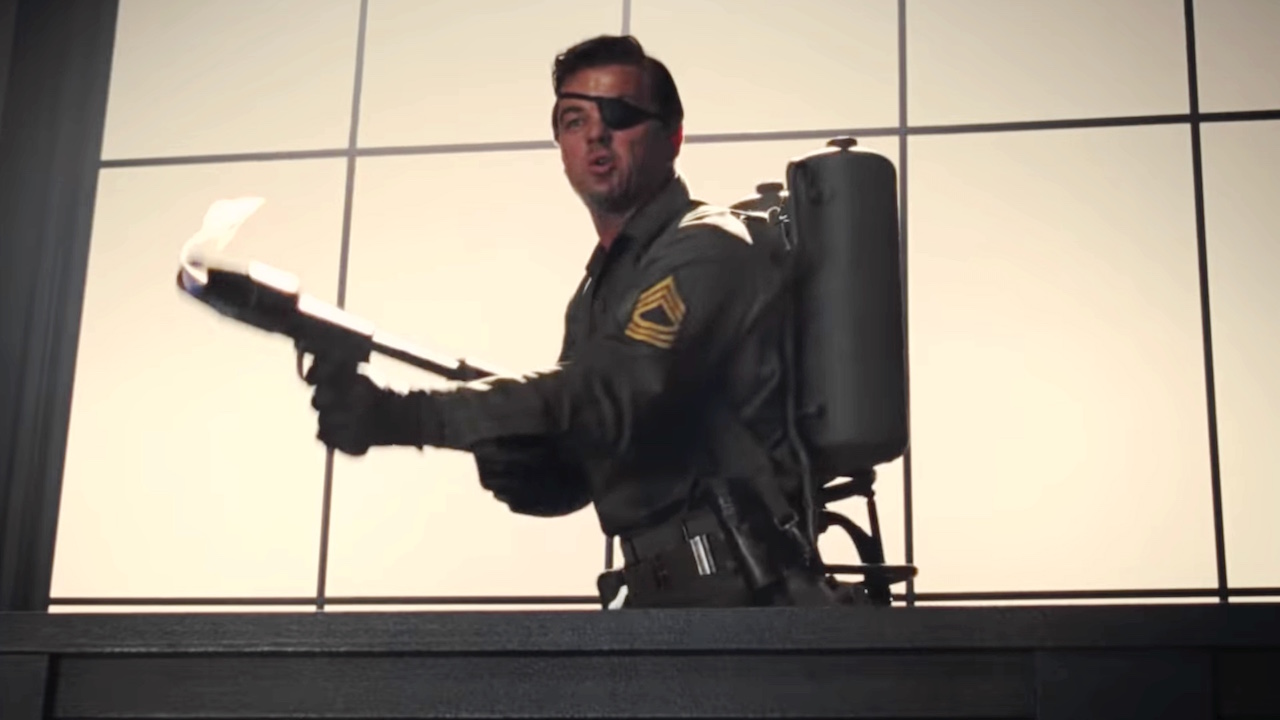 The pacing in Once Upon A Time is as leisurely and loose as QT’s gotten since Jackie Brown. Make no mistake, this not a plot heavy action genre movie, its a true character based piece set over the course of three days in 1969. A hazy, golden memory of an alternate past you don’t want to rush through. You’ll want to stay forever in this Realer Than Real World Tarantinoverse and soak in the pop culture saturated goodness like a warm pool. Kicking off your shoes and relaxing awhile to spend time with these colorful, intriguing characters as they go about their lives is what this movie was custom made for. When you do need a burst of energy, you’ll get it in things like Cliff Booth gunning his Karmen Ghia down Hollywood Boulevard or Rick Dalton frying up nazis like so much sauerkraut with his deadly flamethrower in WW2 actioner The 14 Fists of McClusky (a film within the film). That’s a helluva good picture! 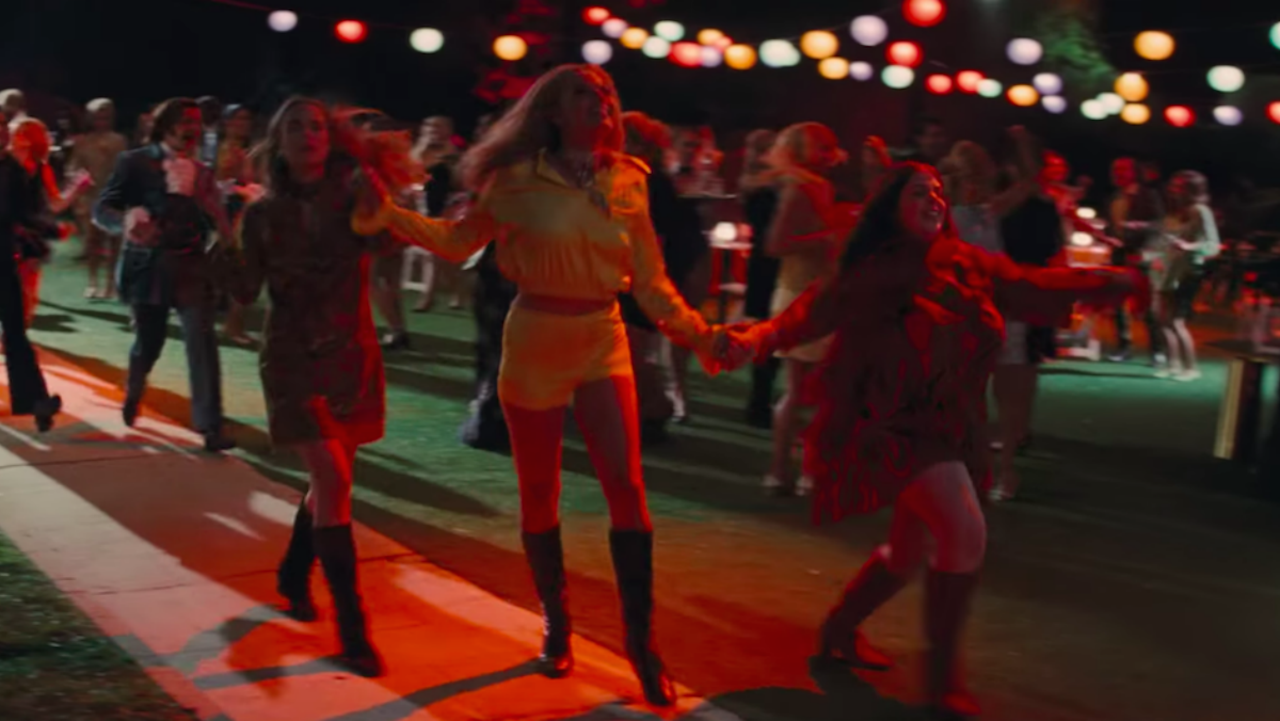 What can I say about longtime QT collaborator Robert Richardson’s cinematography other than I think its simply gorgeous and one of the best films he’s ever done. I don’t know enough about the art of film photography to get technical but I just know the movie is pure eye candy. From the old black and white stock footage of Bounty Law to the different prints of Rick’s 60’s genre films to the final section that goes into deep Rolling Thunder toned darkness. If you have working eyeballs, this movies color palette will make them happy. The soundtrack is of course a main component bringing to mind American Graffiti which had the wall to wall sounds of pop music as Greek chorus and DJ Wolfman Jack excitedly talking through the night. In QT’s film, its LA’s KHJ-BOSS Radio, and the sounds of The Real Don Steele yakkin’ as 60s hits by Paul Revere & The Raiders, Deep Purple and Neil Diamond play. When QT picks the music, you always know you’re getting the best movie mixtape you ever heard. No doubt. 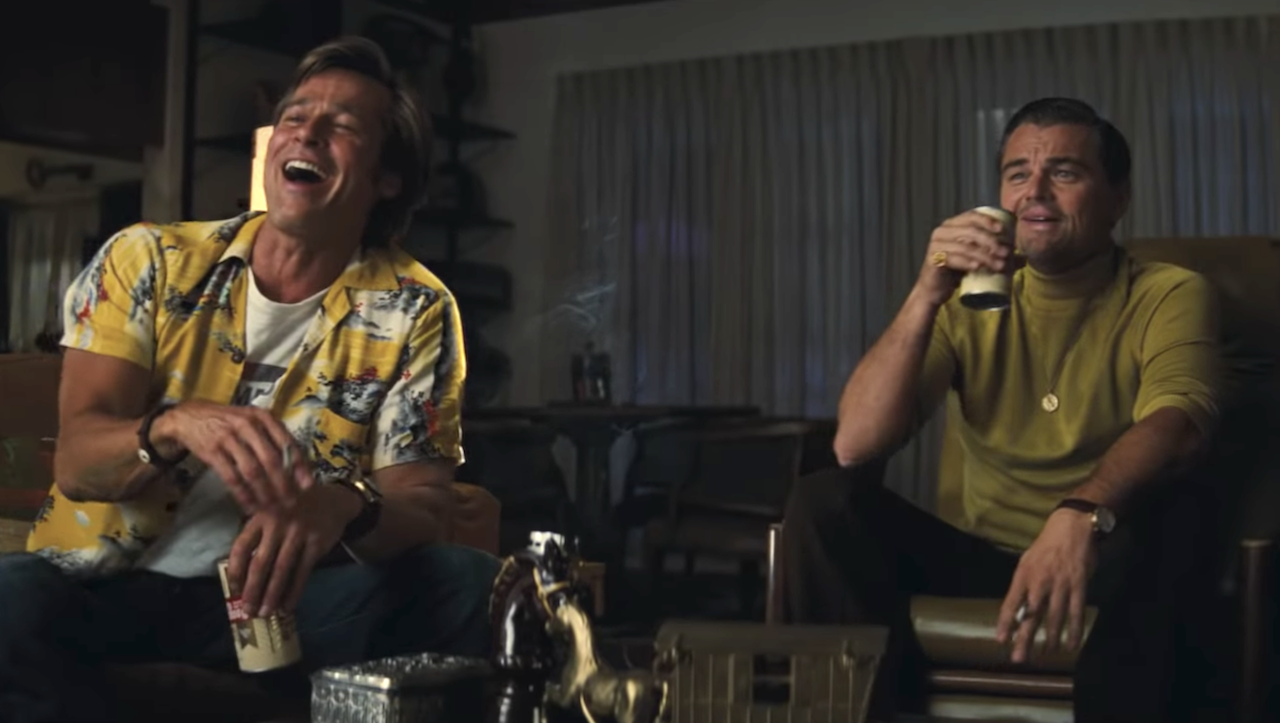 The finale of the movie (which involves Cliff Booth smoking an acid dipped cigarette) is one of the best QT has done in his career. Of course if you know the history of what happened on the night of August 9, 1969 it will make an even bigger impact on how you react.

Once Upon A Time In Hollywood is the ultimate Tarantino hangout film via an honest and up close celebration of all those unsung actors of the 50s and 60s living on the verge of New Hollywood. It’s a cinematically intoxicating blend of exhilaration and deflation as we go on this journey with them. Leo’s Rick Dalton is a man with the ability to rise above his situation and achieve something greater and maybe he will if he can just find some inner peace and confidence. Cliff Booth is the flipside of that temporarily tortured soul, an indestructible, faithful friend that knows everything is going to work out in the end. This cinematic love letter to the end of the 60s also sweetly bids farewell to Sharon Tate, who will live on in our minds as a positive force of nature that warmed the hearts of everyone around her.

For the serious film fans: Check out our list of films connected to Once Upon A Time in Hollywood on Letterboxd.