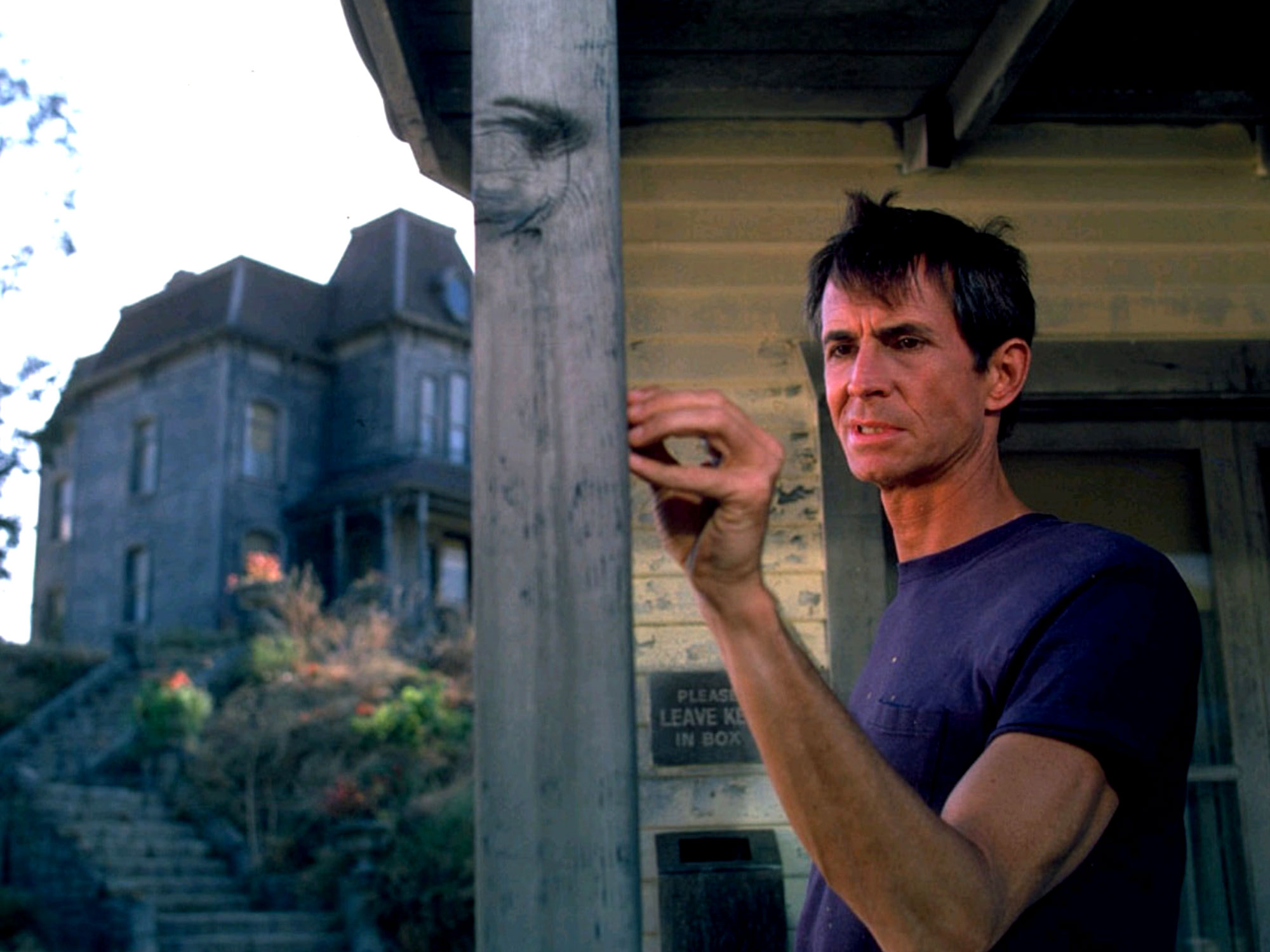 Psycho II begins with the Bates Motel sign switching to ‘Vacancy’ and the famous shower sequence from its predecessor playing out in all its glory (click here to read my previous deep dive into Psycho). It makes it clear that it will have no pretensions as to what kind of movie it will be and where it is coming from. In fact, the original masterpiece is writ large over the body of Psycho II, from the shower scene with Mary including the peephole, the iconic house and motel returning, the parlour with its stuffed creatures, the knife, car coming out of the swamp and mother’s room.

Sometimes it feels as if the entire throw-back deal is intentional, to sort of draw an imitation of the original and attract the viewer towards it. Its not something that even the more famous sequels escape from, for familiarity breeds interest. Luckily for us in this case: the sound, story and acting don’t suffer from the same and it allows the movie to have an independent existence of its own.

The Movie begins with Norman Bates being released from the mental institution after being deemed sane by the court. There are protests by Lila Loomis (Marion’s sister who married Sam Loomis after events of Psycho) but there is nothing under law which can stop Norman from being a free man. After years of institutionalization and having recovered from his ‘troubles’, he returns back to Bates motel while securing work at a diner nearby. He takes in Mary (Meg Tilly) who has been kicked out by her boyfriend. What he returns to is a very different motel and immediately fires the manager who has been allowing shady business to go on at his place. He takes Mary back to his house and makes her stay there. But soon he receives a call from his mother and things start going awry again at the Bates motel.

Anthony Perkins does fit the bill yet again as the lead of the movie, albeit as a slightly different Norman Bates. The recovered Norman doesn’t refer to his previous crimes or express any remorse, (that plot-point is never brought up, except when referred by Lila to police and in her quest for revenge) he is yet again his unsure self, trying to help out (perhaps smitten again or just being his helpful self) a girl who has lost her way (Mary, after being left homeless) and dealing with troubles that arise as soon as he enters the motel. The Norman of this movie written quite well by Tom Holland (who later went on to direct Fright Night and Child’s Play and plays a deputy in this movie) is how a normal Norman would be: kind and helpful, stubborn with respect to his demands, ready to hide secrets and help those in need. There is something about police chiefs who take a liking for Norman- Deputy Sheriff Al Chambers in the first movie refers to him as a ‘hermit’ and Sheriff John Hunt here goes soft on him. So, Norman has been endowed with a quality that is of coming across as trustworthy and harmless, it is not something that is negative in itself, however when he is not ‘himself’ it is easy for the police to overlook him as a suspect as happened in the first movie. It is interesting how Jeffrey Dahmer, referred to as the Milwaukee cannibal had a sense of control over situations even when he was confronted by the authorities, (a situation displayed well in the graphic novel My friend Dahmer) by displaying a sense of readiness to face the events. Norman shows a similar remarkable readiness to face the authorities whenever confronted by them and in the initial phase- when he’s losing himself, he’s ready to face himself with the truth that he might be behind these murders. It is a sad realization and viewers seem to connect with the defeated Norman.

Meg Tilly does quite well as Mary Loomis, the daughter of Lila Loomis who has entered the Bates household to help her mother with the efforts to re-institutionalize Norman. She eventually develops a soft-spot for Norman, trying to figure out the mystery as to who is behind the murders and openly rebels against her mother who is quite adamant on sending Norman back.

The biggest issue that I have with Psycho II comes perhaps in terms of its story. It starts off pretty timidly, developing in its own space and for a ‘slasher’ some times the start comes across as too slow. Now I am not saying that a slasher movie always banks upon its death count to be popular. One of the best in the genre, Halloween had a limited body count, but it developed the idea of ‘fear’ throughout its first half, which kept the viewers glued on to the screen. Psycho II keeps itself wrapped in a lot of explanation and build up at the cost of its soul. We don’t quite understand the purpose of things as much as go through the motions. The original had an interesting ‘Alfred Hitchcock presents’ mashed up with the mysterious owners of Bates motel and a shocking death in its first half to introduce its viewers to something that was revolutionary at the time.

Psycho II only really builds up after the teenagers enter the Bates basement to fool around the fifty minutes mark in the movie and with the gruesome death of the boy, the next forty five minutes rival some of the best mystery movies of the period as the plot thickens around the return of ‘Mother’ as it is hinted that someone besides Lila and Mary is impersonating mother and carrying out the gruesome crimes. Mary stands against her mother and tries to stop her from committing crimes, Dr. Raymond goes beyond his call to save Norman by investigating into the activities of the Loomis family, meanwhile Norman tries to cope with loss of sanity and growing belief that ‘mother’ is taking over him once again. The police too have been involved and are doing some actual investigation instead of just arresting Norman because he came out of an institution. (Had the fear because that trope usually plays out).

Stand out moments for me include when Norman scares Mary by baring his mental state (approaching her with a knife while she’s asleep) but soon breaks down before her, leaving the image of a fragile individual who is being pushed towards insanity, there is another sequence where Norman is alone in the basement with Dr. Raymond trying to help him out and Norman despite losing his sanity tries his best to keep up a straight face before the doctor and is ready to accept his help. The sequence ends hilariously, with some disturbance in scenery behind Norman as soon as he states “It would be a great load off my mind.”, he turns back as if surprised and then faces the screen, expecting to say something but ending the sequence with just a befuddled look on his face.

The final fifteen minutes or so again end quite tamely, as compared to the build up that had intensified so many things. Dr. Raymond and Mary are both killed off pretty quickly, in ‘accidental’ deaths due to mistaken identities. I didn’t mind the way it worked out but surely both characters deserved better justice (in the case of ‘slasher’ movies, perhaps more interesting deaths) and the ‘mother’ is revealed to be one of Norman’s co-workers at the diner, Mrs. Spool. This was another issue because there was no hinting as to what might come to the audience. There is not an expectation among the audience that they might solve the mystery but they always love the idea that they can connect the dots by some kind of foreshadowing or hint dropped earlier once the big reveal has been made. A peculiar trait, a strange question or even a small character trait, which gains greater currency in the light of later events helps the movie develop a link with the viewers. However, here the new mother seems to be thrust at the audience. The film ends with Norman doing what Norman does and returning his new mother to her old resting place.

One of the interesting ideas that the movie explores is how Norman tries to live a normal life with a young girl. He’s always been interested in the opposite gender but never been quite able to express himself due to his ‘limitations’. It is interesting how Mary after seeing the real Norman Bates, grows to like him and starts caring for him so much as to dress up as mother towards the end to get him out of his bout of insanity. Their friendship is beautifully explored in the movie.

Another idea explored was Lila Loomis losing her normalcy for the sake of revenge, the sheriff even quips “…if Norman Bates is crazy, there are a whole lot of people running him a close second.”, while even her daughter is ready to forget events that took place twenty years back, Lila who lived through those times, is not ready to forgive or forget about Norman and thus wants to see him back where he came from, not ready to entertain the idea that he might be reformed.

The music does a good job at reflecting Norman’s internal turmoil. It plays out beautifully during Norman’s breakdown. (The ‘Toasted Cheese Sandwiches’ scene, it is emotional but one can’t deny the hilarity of the “you smell like the toasted cheese sandwiches.”)

Overall Psycho II is a different movie from Psycho, even though it harks back on the original a number of times. It can be categorized as a slasher while the original was Psychological thriller. As a sequel to Psycho it stands on a solid ground, perhaps the best material there is in the Psycho movie series other than the original. As a slasher movie, it does justice to the genre. The body count is not high but the suspense build-up during death sequences of the boy and Lila are good. It is way better than the numerous sequels that spawned out of Friday the 13th, Halloween and Nightmare on Elm Street. As an Anthony Perkins feature, it is perhaps one of the better movies in terms of him playing a troubled character. So, if you are a fan of any of the above three, do give Psycho II a try. It is way better than it has been given credit for in the past.