In 1983 Director Charlie Ahearn brought the inner city world of hip hop, which was then a new art form, to the big screen with his urban drama WILD STYLE. Since that time it has become a cult classic for movie buffs and a special touchstone for hip hop fans respectively. The story of Wild Style follows a talented young graffiti artist named Raymond (Lee George Quinones) who goes by the cool moniker “Zoro” when he does his colorful, vibrant spraypainted pieces on the city’s subway cars. We get to see the dangerous side of the tagging lifestyle when he’s chased out of the train yard by some other punks one night. When Zoro arrives home, his older brother, who has joined the Armed Forces, is there waiting and not happy. He lets Zoro know that he thinks the graffiti stuff is a big waste of time and that he should grow up and get a real job.

Still, Zoro is intent on making it as an artist regardless of his brother’s opinion or anyone elses. He does have one person that could help him get there, that’s his old friend Fade (Fab 5 Freddy) who runs a local nightclub and has many connections in the entertainment and art world. Zoro has also fallen in love with a young girl named Rose, but due to his unsettled ways, she has been off seeing other guys. His hope is to finally make it big as a professional artist and win her back.

Zoro’s personal drama is intercut with sequences featuring popular hip hop performers of the time. You’ll see such classic acts as Grandmaster Flash, The Cold Crush Brothers, Grandmixer DXT, Fantastic Freaks, Busy Bee and Double Trouble doing their thing with dope style. There’s also breakdancing groups represented like Rock Steady Crew, Pop-O-Matics and Union Crew popping and locking all over the place. While watching the artists and crowds interact, you can see the electricity and excitement the music had for all the inner city kids who really needed an outlet to express themselves in positive ways.

The New Wave group Blondie can also be heard playing in the background during several scenes. Their hit “Rapture” was one of the first mainstream pop songs to feature rap in it. Blondie guitarist Chris Stein co-produced the original music for the film with pal Fab 5 Freddy who would go on to be known for his role on Yo! MTV Raps.

Along with other early hip hop themed movies like Style Wars and Beat Street, WILD STYLE is an authentic look back into what life was like on the New York hip hop scene in the early 80s. It truly is a historically important, wildly entertaining piece of pop culture/music cinema.

Special Thanks to Margarita Sophia Cortes at Music Box Films 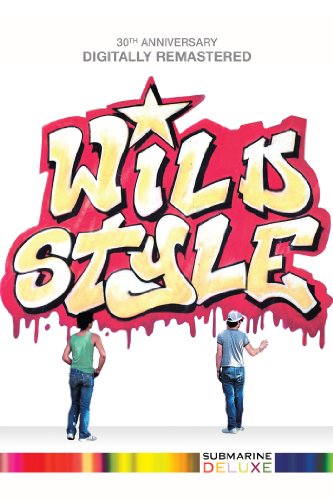