THE WICKER MAN – The Final Cut

Robin Hardy’s psychological thriller The Wicker Man was released in 1973 to a modest reception, but over the past 40 years it has been reassessed by film lovers and is now considered a cult classic masterpiece. It will finally be coming to Hi-Def Region 1 Blu Ray from Lionsgate on January 7, 2014. Longtime fans will also be happy to know that this is the definitive version of the movie. The only downside is it won’t be a Special 2 Disc edition like the UK got.

Based on a 1967 novel called Ritual, the story follows Police Sergeant Neil Howie (Edward Woodward) who gets a letter requesting he travel to Summerisle, a Scottish island to investigate the dissapearance of a young girl named Rowan. Upon his arrival, Howie, who is a staunch Catholic, is shocked to discover the residents worship old Celtic gods and live a paganistic lifestyle. Summerisle also encompasses a massive fruit plantation which drives its economy. Howie interviews the residents including Lord Summerisle (Christopher Lee) the leader of the community. He comes to suspect that Rowan might have been sacrificed as part of a ceremony to bring back the fruit crops due to a long dry spell. As Howie continues to search intently for clues about Rowan, he slowly comes to realize there’s a devilishly diabolical conspiracy going on around him. 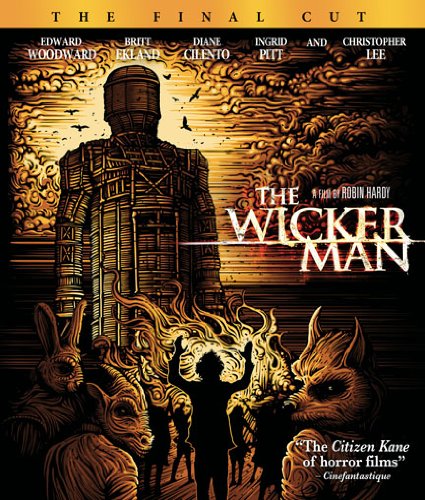