Go on a rollicking road trip with PLANES TRAINS AND AUTOMOBILES

One of the all time greatest road comedies is coming to Blu Ray. Writer-Director John Hughes‘ classic Planes, Trains and Automobiles (1987) is a movie that, over the years has gained a huge fanbase due to it’s hilarious lead performances from two master funnymen: the late John Candy and Steve Martin. The story takes place during the Thanksgiving holiday. Martin plays Neil Page an advertising exec who is rushing from a stuffy New York sales meeting back to his home in Chicago (the main hub of the John Hughes movie universe) to his waiting wife and kids. Meanwhile, an eccentric shower ring salesman, Del Griffith (John Candy) is heading there as well. Due to several unforseen problems on the trip, the two men end up traveling together and go on a crazy adventure.

The hook of the film is their clashing personalities. Martin is a very short tempered man without a lot of social skills, whereas Candy is an overtalkative, boisterous, extremely friendly guy. Over the course of getting to know one another and going through their trials and tribulations, the two form a great friendship. This is one of my favorite John Hughes movies and it’s the perfect kind to watch during the Fall/Winter season. It’s filled with hysterical scenes, trademark Hughes dialogue, action, colorful supporting characters and great acting. We highly recommend it to film fans.

SPECIAL FEATURES (Presented in standard definition except where noted):

– John Hughes: Life Moves Pretty Fast (HD)
– John Hughes: The Voice of a Generation
– Heartbreak and Triumph: The Legacy of John Hughes
– Getting There is Half the Fun: The Story of Planes, Trains And Automobiles
– John Hughes for Adults
– A Tribute to John Candy
– Deleted Scene—“Airplane Food” (HD) 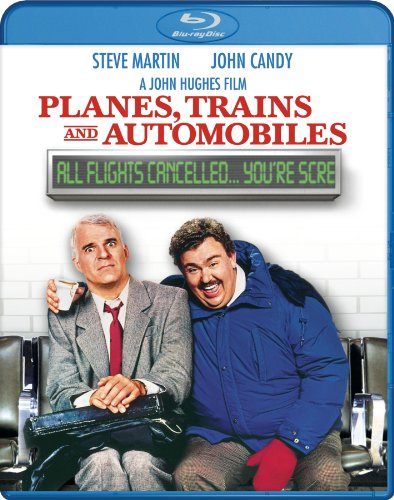