A Tribute to Roger Moore Pt. 2: FOR YOUR EYES ONLY

For Your Eyes Only is one of the most notorious entries in the entire 007 franchise. Not because of ridiculous content or anything controversial, it’s because of the new attitude and concept it presented to audiences. Critic Leonard Maltin even said this in his annual Movie Guide book…

“No other James Bond films has provoked so much debate among 007 fans (even us); judge for yourself”.

There’s no middle ground here. You either like it or hate it. The first time I saw the film was about 13-14 years ago and I don’t remember anything about it except the car chase scene and European scenery. Fast forward to 2014, one of my friends did a James Bond retrospective on his podcast and he said that FYEO has the one of the most boring theme songs and storylines in the history of franchise. I highly doubted that since I liked the theme song a lot (we’ll talk about this soon), but it had been a long time since I watched it…so I decided to check it out. I was really glad that I made the right move since it turned out to be one of my favorite Bond films of all time and later on I appeared on the same podcast to defend this movie. 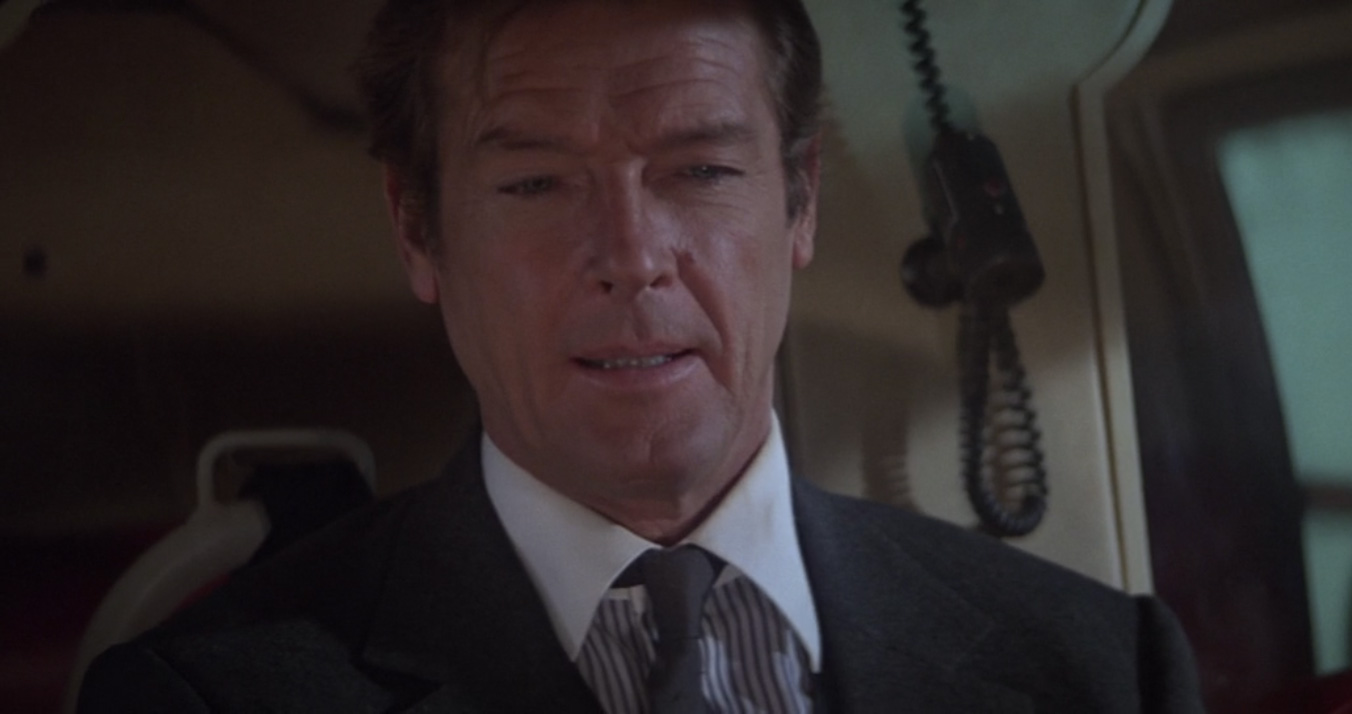 Before we cover the plot, I have to talk about what most people hate about For Your Eyes Only: the pre-credit sequence. Some say that it’s dumb. Some say that it’s insulting. But there’s a reason behind the controversial scene. In case you haven’t seen it, this is when Mr. Bond, after laying flower at the grave of his wife (Tracy, from On Her Majesty’s Secret Service) is stuck inside a remote-controlled helicopter. It’s later revealed that the guy who controls it is a familiar looking bald guy (we never see his face) in a wheelchair and has a white cat. After realizing this, Bond takes control of the helicopter, picks up the poor man’s wheelchair and drops him in a smokestack. The last thing we hear from the guy is him yell: “Mr. Bonnnnnnnnnnnd!”

Does it look stupid and belong in an episode of Looney Tunes? Yes. But this is the only over-the-top comedic scene in the film and there’s an explainable reason behind this. Around that time, there was a legal conflict between Eon Productions, the company that produced James Bond franchise, and Kevin McClory, who claimed that he owned the rights to the Blofeld character as well as the SPECTRE organization. They chose to make this scene to tell everyone that they couldn’t use the Blofeld character anymore (the film doesn’t give the name of the character in order to prevent a lawsuit). It’s not really a smart move, but it’s better than paying other legal fees, I guess. 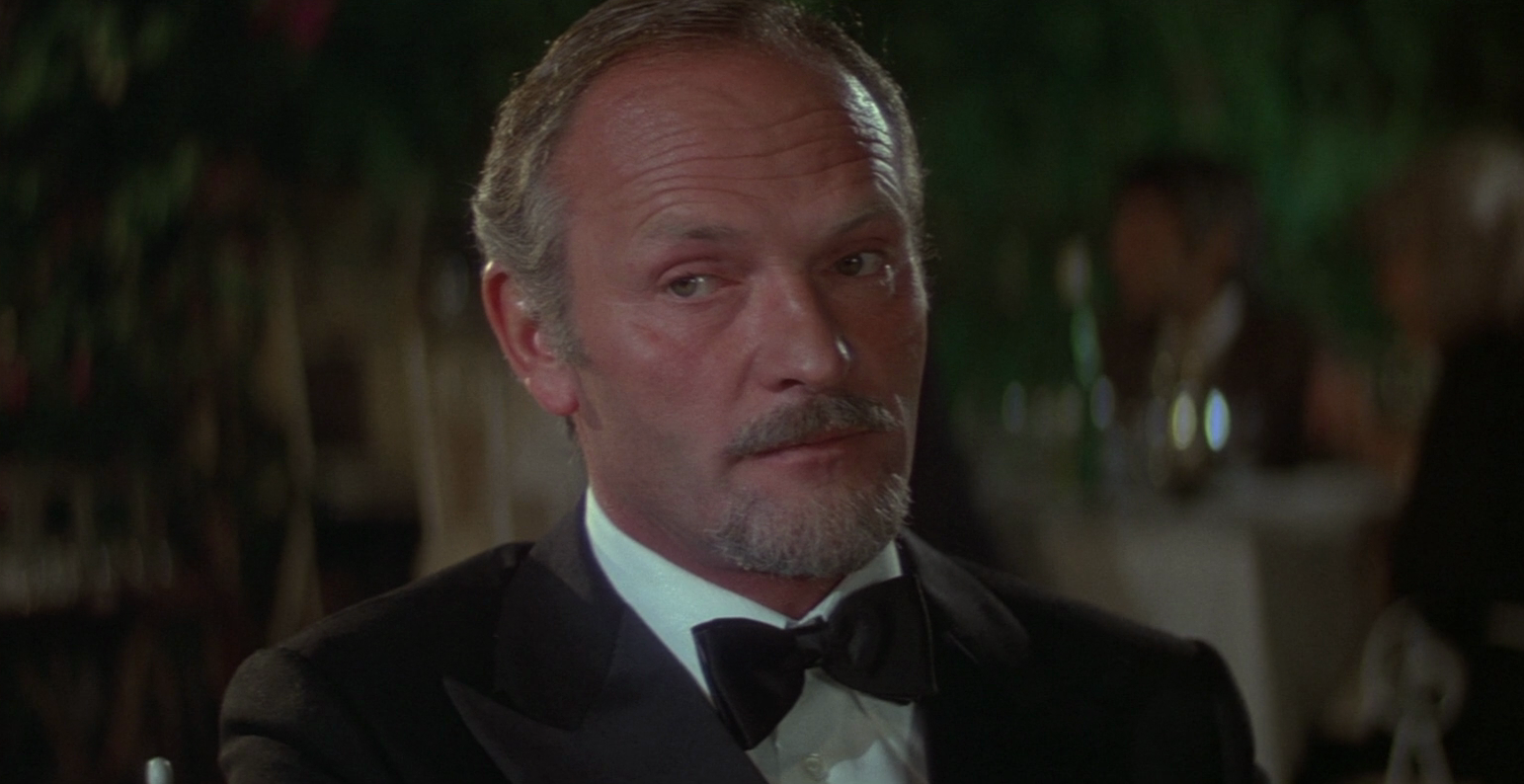 Anyway, the film concerns an Automatic Targeting Attack Communicator (ATAC), a submarine controller that’s in the St. Georges ship. It can order submarines to shoot missiles from the far away. Unfortunately, the ship is sunk down by an old mine, so it’s the task of 007 to get it back before the bad guys get it. So who’s the villain here? It’s not a tycoon who wants to destroy the population on Earth. It’s not an owner of a gigantic base. He’s a smuggler named Aristotle Kristatos, who wants to be rich by retrieving ATAC and selling it to the Soviets. That’s it. No more fantasy here. This takes us back to the realistic Bond that has little-to-no gadgets, memorable characterization, and the exciting sequences that aren’t limited to just chase scenes. 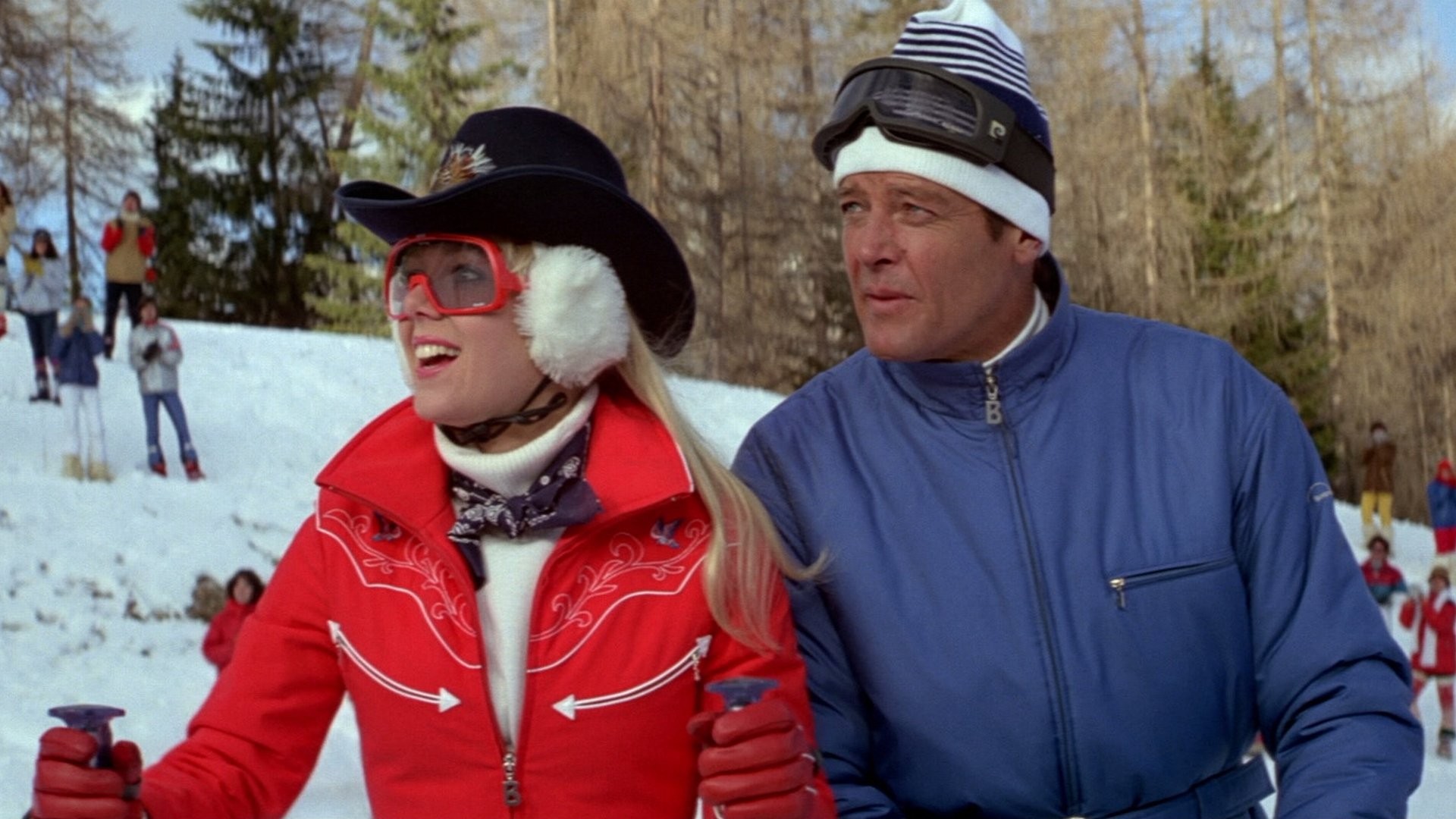 Let’s begin with the storyline and characters. The whole multi-million pounds organization and cartoonish elements are replaced by a complex storyline and people that easily win the audiences’ hearts. The plot itself is a little bit more complicated than the previous ones, but it has pretty good technique that slowly reveals the plot and relations between characters to us. Also, forget the fancy gadgets that we all love. In this film, 007 heavily depends on his wits and his strength to get through obstacles. Thus, there are a variety of thrilling scenes. From the ski chase to underwater fighting to hide-and-seek shooting, it’s a fresh idea to make this a realistic Action/Thriller instead of full-blown exaggerated fun like previous entries. There’s a scene that symbolizes this change quite well. It’s when the henchman hits the window of Bond’s white Lotis Esprit…and then the car suddenly explodes! I don’t know why Q installed this “option” to the car since it wrecks the expensive vehicle. Regardless, this links to the next scene where Bond and our heroine have a car chase in Citroën 2CV, which is a small car instead of 300 HP sports coupe! It implies the down-to-the-ground attitude of FYEO as well.

And speaking of the leading female character, our Bond girl is Melina. She’s easily one of my all-time favorite Bond girls (besides Anya from The Spy Who Loved Me, Tracy from On Her Majesty’s Secret Service, Aki from You Only Live Twice, and Jill Masterson from Goldfinger) because her background story sets the tone for the rest of film. Her family is killed since they’re involved in the finding of St. Georges, she plans getting revenge on whoever murdered her mom and dad. Sure, she’s not the first Bond girl who was in a situation like this. I remember in Goldfinger Tilly Masterson seeks revenge against who killed her sister (by painting her body gold). But since she’s not a prominent character and not very charming (moreover, she later gets killed by Oddjob), Melina fulfills what Tilly should be. At first, Melina intervenes in Bond’s job by shooting an arrow at the killer, who is about to be interviewed by our hero. This makes MI6 furious since she ruins the trace of evil behind this. But later on, Melina tells Mr. Bond about her tragic story and this makes him sympathize with her and realize that she’ll take down the bad guy, not matter what happens. She’s smart, has the ability to dive underwater, uses arrows, has driving skills, and most importantly, has lots of ambition. These are reasons why 007 and I fall in love with her.

Another character that I like is Milos, played by Topol. I remembered him from Flash Gordon since he played Flash’s sidekick and he did a pretty good job in that role. Here, he’s the smuggler who’s willing to help Bond track down Aristotle. What I like about this character is that he has a sense of humor and the fact that our hero is willing to work with him, although Bond knows that he’s a smuggler. It shows us that sometimes someone who helps the hero doesn’t have to be a 100% good guy. And speaking of the good guy attitude, the final climactic scene implies to us that Mr. Bond has developed anti-hero traits since he doesn’t follow orders. I’m not going to reveal what he does here since it’s worth watching. 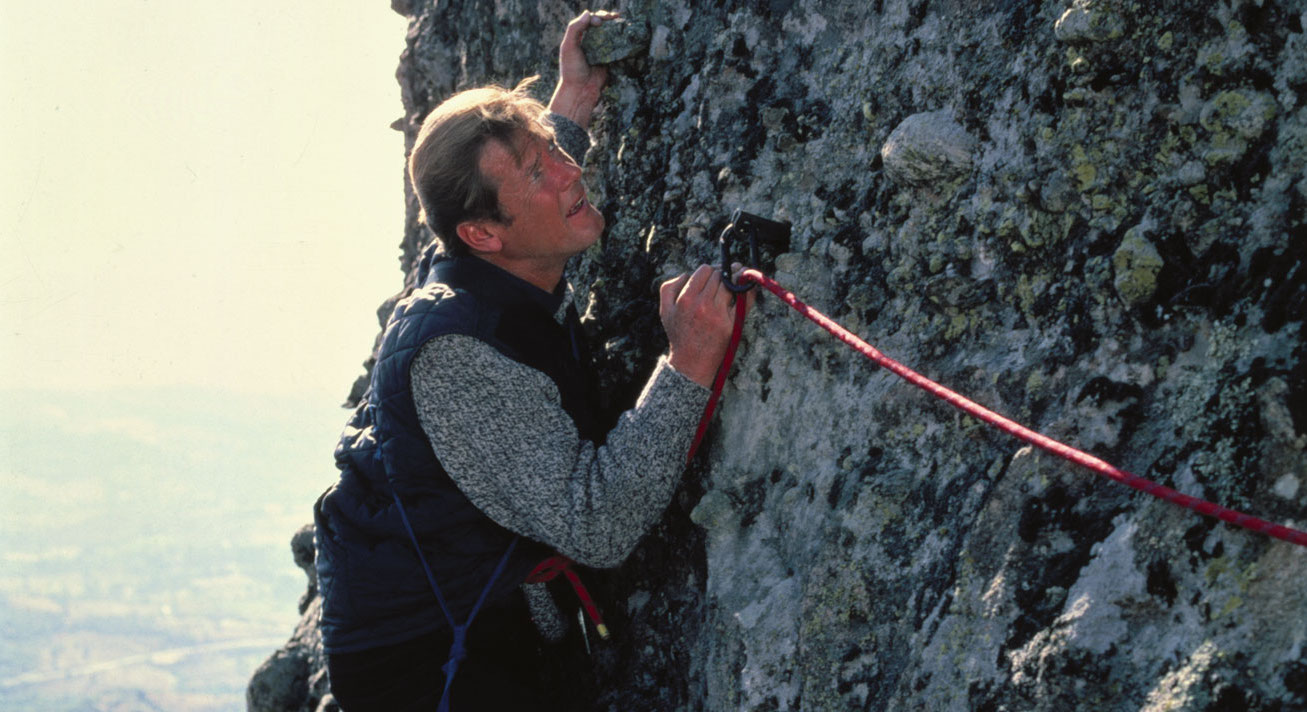 Now it’s time for me to defend two other things I can think of. First, a creepy character that becomes one of the most infamous Bond girls: Bibi Dahl. According to Roger Moore, she’s supposed to be a 16 year old skater who is supported by Aristotle. What makes this character live in infamy is that she always tries to seduce Bond. She even sneaks to his room, takes her clothes off (under the bed. It’s PG. What do you expect?), and says awkward dialogue like “I’ll do anything for you” or “Him? [Aristotle] He thinks I’m still a virgin”. Keep in mind that she already has a boyfriend. I should be scared by her tactics, but then I’m pretty sure that her character is supposed to be an annoying eye candy/comic character instead of one that we should take seriously. Also, the age of the actress who plays Bibi (Lynn-Holly Johnson) and the one who plays Melina (Carole Bouquet) is only one-year apart, so that’s not really a big deal for me. 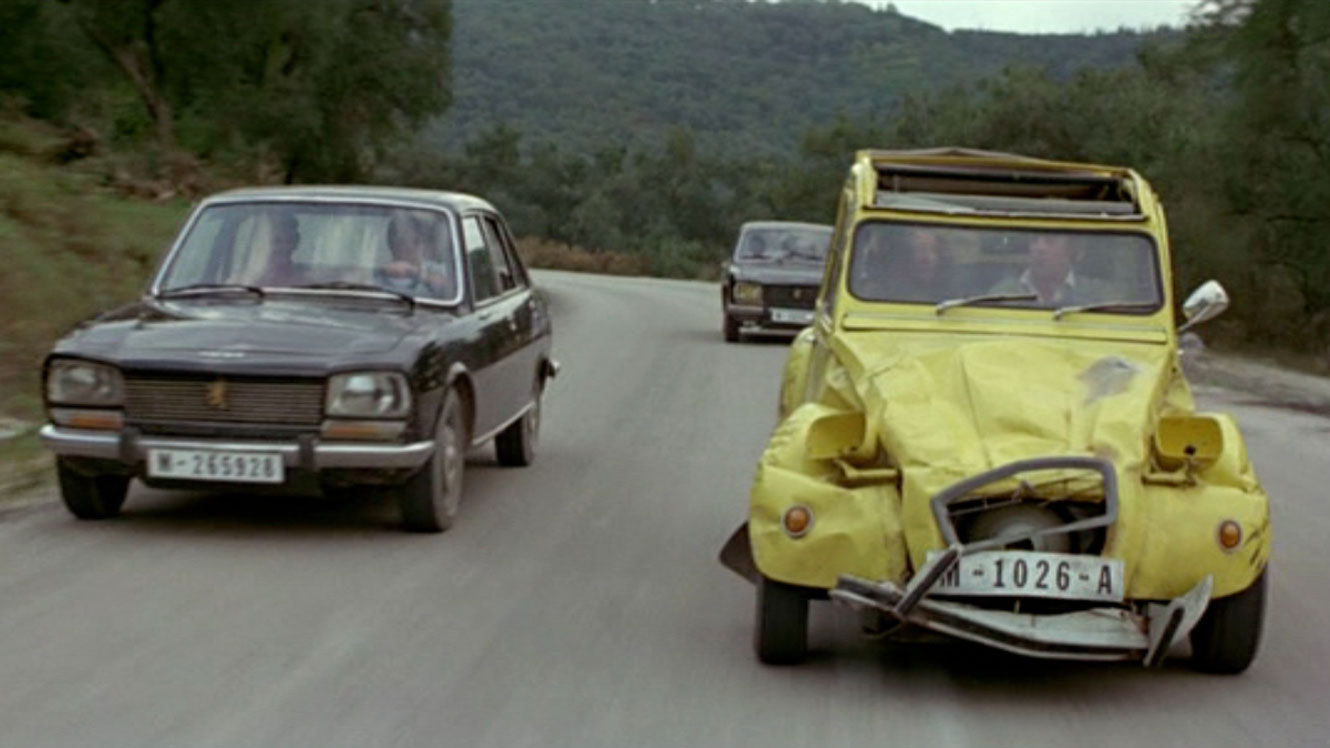 Another thing here is theme song. To me, For Your Eyes Only by Sheena Easton is my all-time favorite Bond song. It’s slow, sentimental and totally beautiful. What impressed me even more is that the traditional opening credits were shot in a more modern music video style. We actually see the singer in the title sequence and they did a good job on that.

To sum up, For Your Eyes Only is not only the movie that saved United Artists from bankruptcy (due to Michael Cimino’s massive flop Heaven’s Gate) but it’s one of the most underrated 007 films out there. You may like it because of the back-to-basics style. You may hate it because the humor isn’t as obvious as other films (and there’s no memorable one-liners). This entry might not represent what most people remember about Roger Moore’s era, but this is one of the best in terms of quality.

Next time, I’ll take a look at something completely different. It’s not a Bond movie, but our Roger plays a spoof of this character…and has to compete in a car race as well. Stay tuned.