Nowadays, there’s a trend about romanticizing the past. For instance, we always think of the 80’s as an era when neon lights were shining, VHS was everywhere and people were dancing to synthesizers and drum machines. The reality is more or less different from that. We had the Cold War, an AIDS epidemic, drugs, corruption, and if you lived in England, there was a racism issue as well. Although it was started in late 70’s, the rise of the National Front and National Party revived the anti-immigrant movement as well as the skinheads. We always stereotype skinheads as the racists, which contradicts the roots of the trend back in 60’s. It used to be a type of working class people who enjoyed Reggae and Ska music and had nothing to do with race or politics at all. And speaking of skinheads, there’s an interesting film about the story not only about the trend, but the Brits in the early 80’s as well, This Is England from 2006. 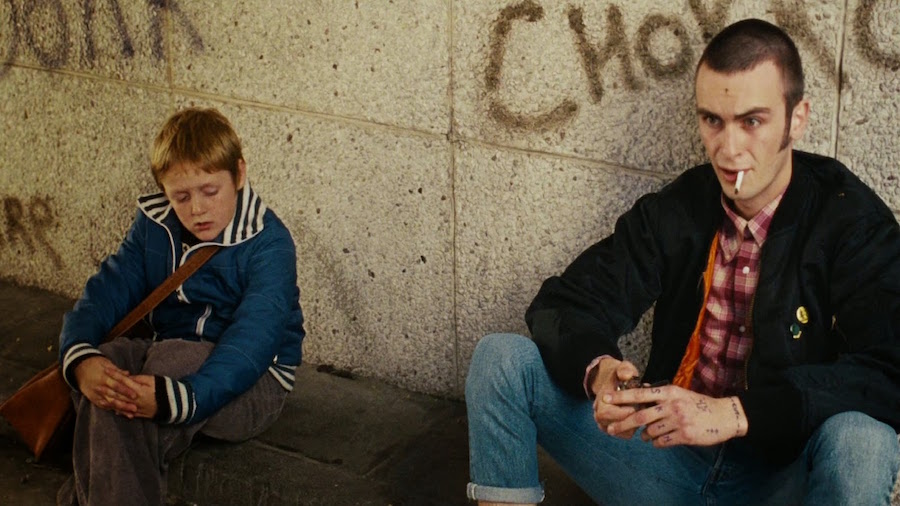 Set in 1983, the film tells the story of a 12-year-old kid named Shaun. His life is absolutely miserable. His dad died in the Falkland War and he always gets picked on by other kids. He has no real friends until he meets Woody and his skinhead gang. Although the other members hesitate on letting Shaun become gang member, Woody totally welcomes him. Soon, Shaun shaves his head, changes the way he wears clothes and decides to hang around with the gang. Everything seems fine until Combo, Woody’s friend who is released from jail, comes back. He brings the anti-immigration attitude to the scene which causes them to split into two groups: the apolitical group and the National Front group. While Woody picks the laid-back group, Shaun decides to join Combo’s gang for a specific reason….

First of all, this film reminds me of my all-time favorite movie: Repo Man. Although Repo Man is more Sci-fi/Comedy (not serious drama like This Is England), both films deal with a loser who wants somebody or something to relate to. Otto (from Repo Man) is fired from his old job, cheated on by his girlfriend, and lied to by his parents (who promised to give money to him, but then give it away to some evangelist instead). He has nowhere to go, but then he becomes a repo man and starts making friends with his co-workers. Shaun is pretty similar, except that he’s just 12 years old, so he has a totally different way of thinking. Nonetheless he joins Woody’s gang because Shaun wants friends that he can talk to or hang around with. In the end, they want someone who can get them out of the terrible world where they live. By the way, both Repo Man and This Is England show us a subculture in the 80’s. Repo Man gives us Hardcore Punk dudes that blast the Circle Jerks, Suicidal Tendencies, and Fear at the maximum volume, while This Is England brings us the Skinheads who loved 60’s/70’s Reggae, Ska, and Soul music. They do this to create distinctive style and unite people who share the same interest to join the group. 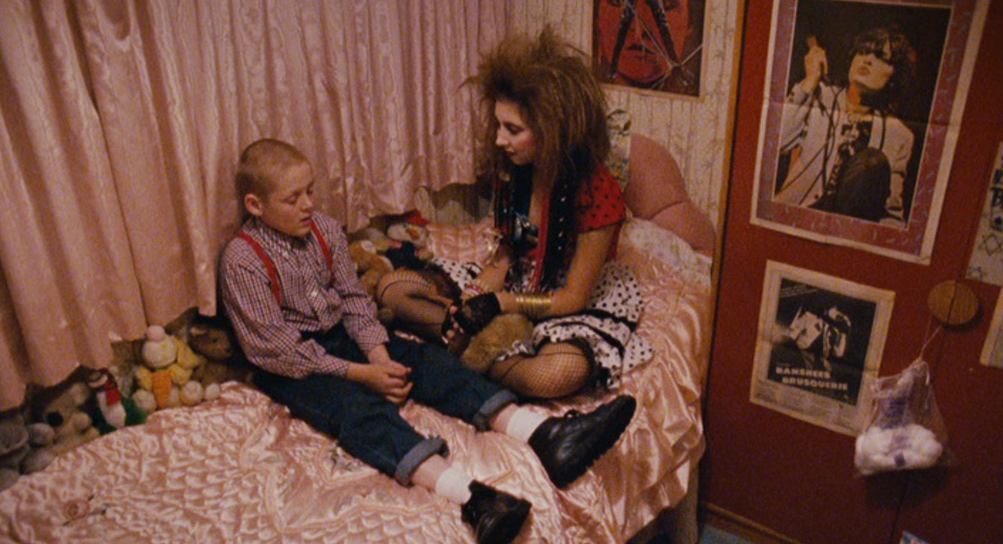 And speaking of group joining, the sole reason why Shaun prefers Combo’s gang instead of the other one is because of his dad. He wants to fight for his dad and the country. So how does this happen since Shaun hates Combo racist antics at first? Well, there was a scene in which Combo gives a speech to everyone, including Woody. Let’s see how touchy it is…

“Two thousand years, this little tiny fucking island has been raped and pillaged by people who have come here and wanted a piece of it. Two fucking world wars, men have laid down their lives for this. For this, and for what? So we can stick our fucking flag in the ground and say, “Yeah, this is England and this is England and this is England. And for what? For what now? Eh, what for? So we can just open the fucking floodgates and let them all come in? And say, “Yeah, come on, come in. Get off your ship. Did you have a safe journey? Was it hard? Here y’are, here’s a corner, why don’t you build a shop? Better still, why don’t you build a shop and then build a church? Follow your own fucking religions. Do what you want.” When there’s single fucking parents out there, who can’t get a fucking flat and they’re being given to these… And I’m gonna say it, cos you’re gonna have to fucking hear it. We’re giving the flats  to these fucking Pakis. Right? Who’ve got 50 and 60 in a fucking flat on their own. Right? We’re giving that to them. There’s three and a half million unemployed out there. Three and a half million of us, who can’t find fucking work. Cos they’re taking them all. Cos it’s fucking cheap labour. Cheap and easy labour. Fucking cheap and easy, which makes us cheap and easy. Three and a half fucking million! It’s not a joke. It’s not a fucking joke. And that Thatcher sits there in her fucking ivory tower and sends us on a fucking phoney war! The Falklands? The fucking Falklands? What the fuck’s The Falklands? Fucking innocent men, good fucking strong men. Good soldiers, real people losing their lives, going over there thinking they’re fighting for a fucking cause. What are they fighting for? What are they fighting against? Fucking shepherds!”

Sounds familiar, doesn’t it? Anyway, at this point Shaun breaks out crying because his dad died in that war and he doesn’t want to hear anything about it again, so Combo says this…

“Oh, look, mate, if I’d have known, honest, I wouldn’t have said, man, but what I’m telling you is the truth. I can’t lie to you. It’s a pathetic war, man. And you want your dad’s life to mean something, don’t you? And this breaks my fucking heart to say it. We shouldn’t have been there. She lied to us. She lied to me. She lied to you. But, most importantly, she lied to your dad. If you don’t stand up and fight this fucking fight that’s going on on the streets, your dad died for nothing. He died for nothing. You’ve got to carry it on, man, in here. In your little fucking heart, you’ve got the pride of your dad, man. Fucking hell. That little fucking whippersnapper has set the standard.” 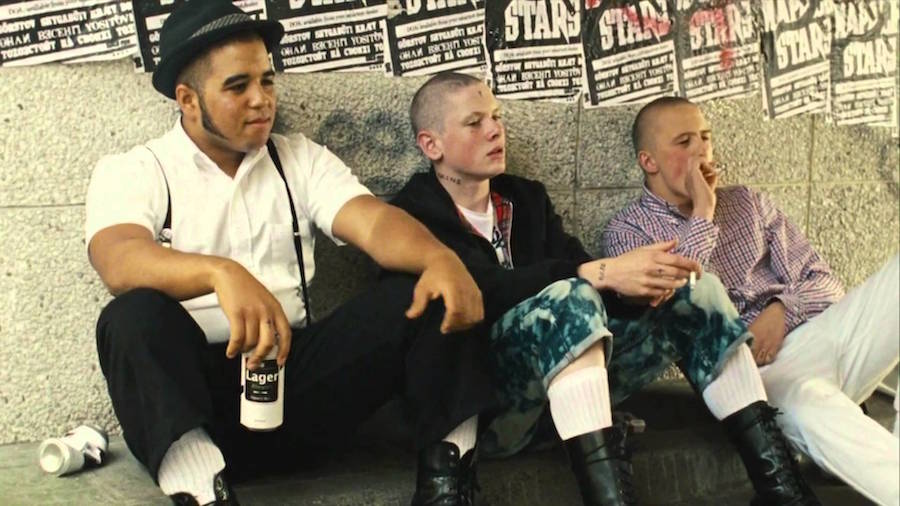 That’s why Shaun joins Combo’s group. It has nothing to do with race or politics. He just wants to prove something for his dad. Shortly after that, Combo group goes to a National Front meeting to hear a speech like this…

“Gentlemen, there is a forgotten word. An almost forbidden word. A word that means more to me than any other. That word is “England”. (The crowd: Yes!) Once, we flaunted it in the face of the world, like a banner. It was a word that stood for power. A word that stood for freedom. A word that stood for respect. But today, we’re scarcely even allowed to speak the name of our country. Gadge, are you honestly… Well, I want to revive that word, a grand old word, the word “Englishman”.(The crowd: Yes! Yes! Yes!) Now we’ve been marginalized. We’ve been called “cranks”. We’re not cranks. Some people say we’re racists. We’re not racists. We’re realists. Some people call us Nazis. We’re not Nazis. No, what we are, we are nationalists. And there’s a reason people try to pigeonhole us like this. And that is because of one word, gentlemen: Fear. (The crowd: Yeah.) They fear us. They fear us because we are the true voice of the people of this country. (The crowd: Yes!) People who work hard, pay their way, it don’t matter what their ethnic background is, I welcome with open arms in this country. It’s the people who think we owe them a living. These are the people that need to go back. (The crowd: Yes! Send them back! Send the bastards back! Send them back! Send them back!) An English king on a battlefield once said, “From this day till the end of the world, only we in it shall be remembered, we few, we happy few, we band of brothers.” Gentlemen, it is the time to stand up and be counted. (The crowd: Yes!). It is the time for action. Our country has been stolen from under our noses. (The crowd: Yes!) Well, gentlemen, it’s time to take it back! (The crowd: Yes!)” 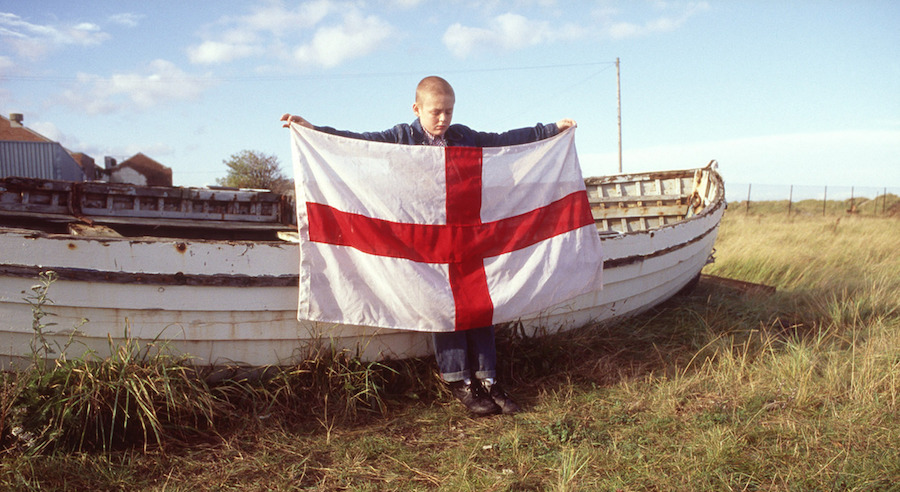 This kind of stuff alienates one of Combo’s gang members and he is fired shortly. I think it’s a good decision since the gang then goes terrorizing minorities with verbal and physical tactics to scare them. Although the National Front members don’t endorse this kind of behavior (at least in his speech above), it more or less encourages people to do so.

To me, the gang symbolizes the Falkland War in one way or another. They try to “fight for the country”, but in the way that’s doubtful and makes people question whether it’s a fight that’s worth it or not. The ending scene (which I’m not going to spoil here) emphasizes this topic pretty well.

To sum up, this is a fantastic movie. Great cast, solid plot, and nice soundtrack. You can watch it as either an entertaining film or a study on how people nowadays still will join racist groups. Maybe it all comes down to the fact they just want acceptance from the people around them. Who knows?