Hal Ashby’s 1973 comedy-drama/road movie The Last Detail has been one of my favorite films ever since I first discovered it. The premise is rather simple: Two Navy officers, Signalman 1st Class Billy “Badass” Buddusky (Jack Nicholson) and Gunner’s Mate 1st Class Richard “Mule” Mulhall (Otis Young) are given Shore Patrol duty to bring Seaman Larry Meadows (Randy Quaid) from their base in Norfolk, Virginia to the stockade in Portsmouth, New Hampshire. Meadows is a kleptomaniac who has been found guilty of trying to steal $40 dollars in funds from a Polio victims donation box. The Navy C.O.’s wife happens to run the charity (which is her favorite) and so Meadows is given a harsh 8 year sentence for his minor crime. 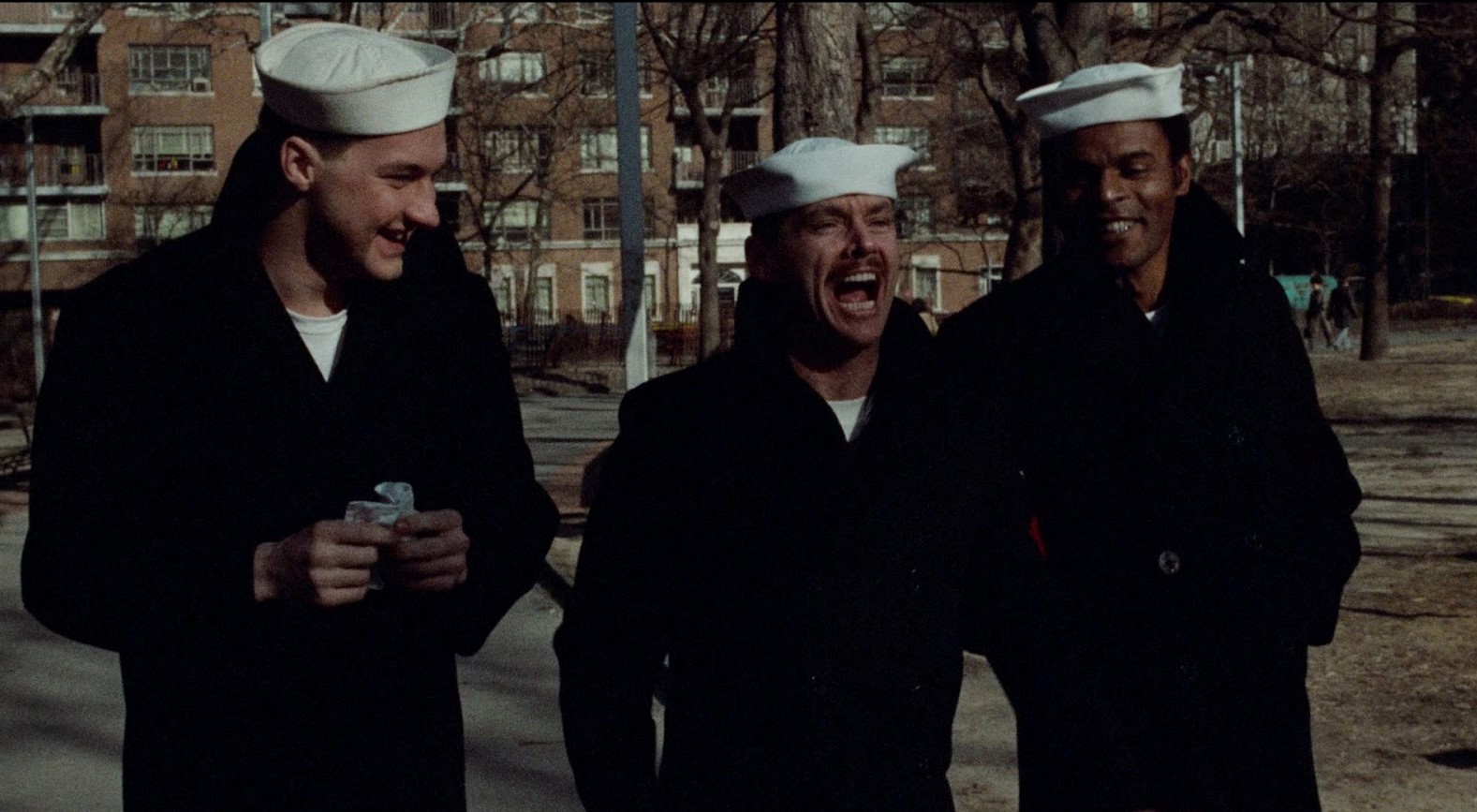 Badass and Mule have several days to get Meadows to his destination so they decide to make his final trip as enjoyable as they can by having little adventures in the different cities on the East Coast. They basically take what should be a very dull and uneventful detail and turn it into an R & R vacation. Their first stop is Washington D.C. where they goto have some beers but are turned away by the surly bartender who won’t serve Meadows since he’s underage. The irate Badass proceeds to show how he got his colorful moniker by angrily cursing out and threatening the man (“I AM the motherfucking Shore Patrol motherfucker!”). The trio end up checking into a hotel for the night where they drink a lot and act rowdy. A drunken Badass takes time to show Meadows the basics of being a signalman. In New Jersey, they take Meadows to say goodbye to his estranged mother only to find an empty messy house waiting. At a train station in New York the three get into a comical fistfight with some Marines in the public restroom after which they stop to eat some Italian sausage sandwiches which Badass claims are the best in the world. As they walk the city streets later that night they overhear chanting and are curious about what it is, discovering a Buddhist religious ceremony (look for pre-SNL Gilda Radner as one of the followers). Later on in Boston, Badass and Mule take Meadows to a brothel so he can get laid for the first time (actress Carol Kane plays the gentle prostitute that has sex with him). When they finally arrive in Portsmouth, Meadows wants to have a BBQ, so they goto a park and roast some hot dogs. Soon, snow begins falling turning the little picnic into a chilly farewell. 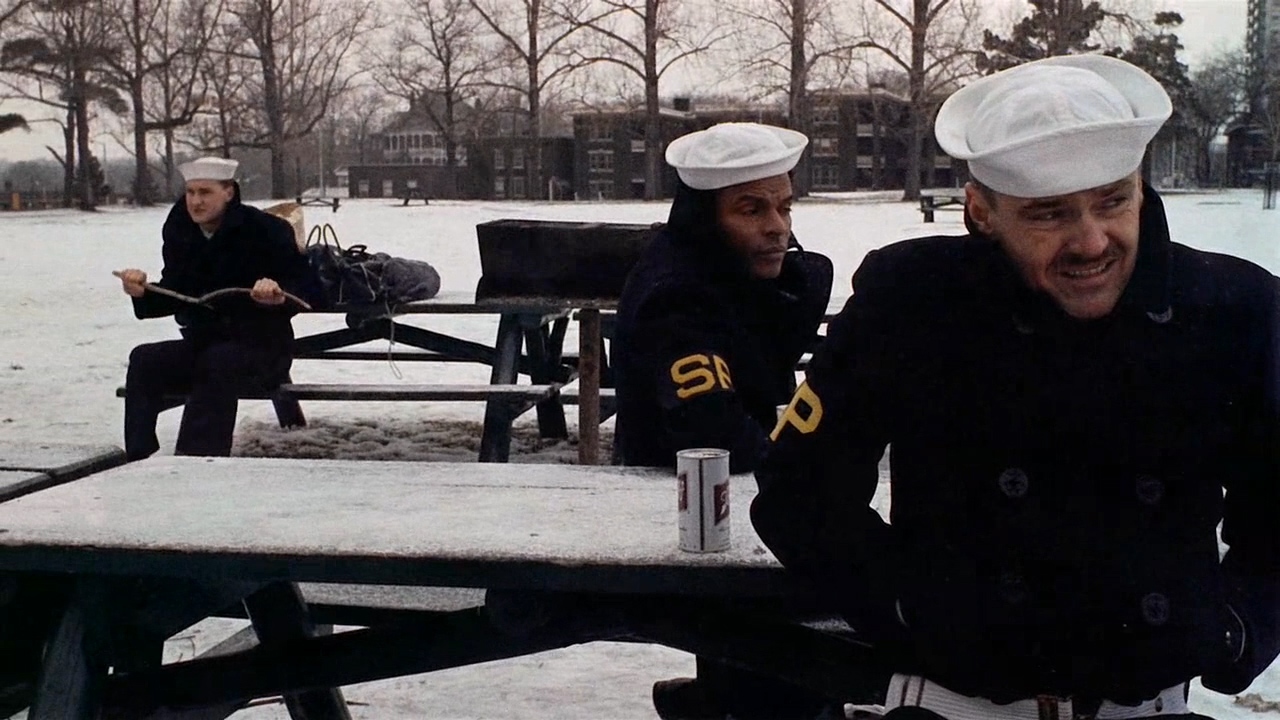 What makes The Last Detail such a classic work of furious cinema is the rollicking traveling adventure aspect as well as the rebellious attitude of the characters. It is very much a cinematic cousin to Easy Rider (1969), the first film that really showed Jack Nicholson’s brilliance as an actor. As opposed to his character George Hanson, who was a gentle spirit, Badass is a brash two fisted fightin’ sailor in this film. An interesting connection between them is how they feature people who are trying to indulge in the notion of American freedom. In this story, Jack is the ringleader of the excursion, pushing things to their limits and showing the shy Meadows how to let loose while he’s still able to. While you watch the movie you really feel like you’re hanging with these guys and getting into trouble with them. The humor is constant as they swear up a storm, tell jokes and generally act like rambunctious teenagers. I think that the movie shows us that all the little things we often take for granted in life are important and can be comforting when the chips are down. Hal Ashby’s direction is precisely crafted and the photography by Michael Chapman has a semi-documentary aesthetic with the use of natural light making the atmosphere as street realistic as possible. The screenplay by Robert Towne is truly one of his finest, he really brought the tale to life with his words, which were expertly realized by the actors. 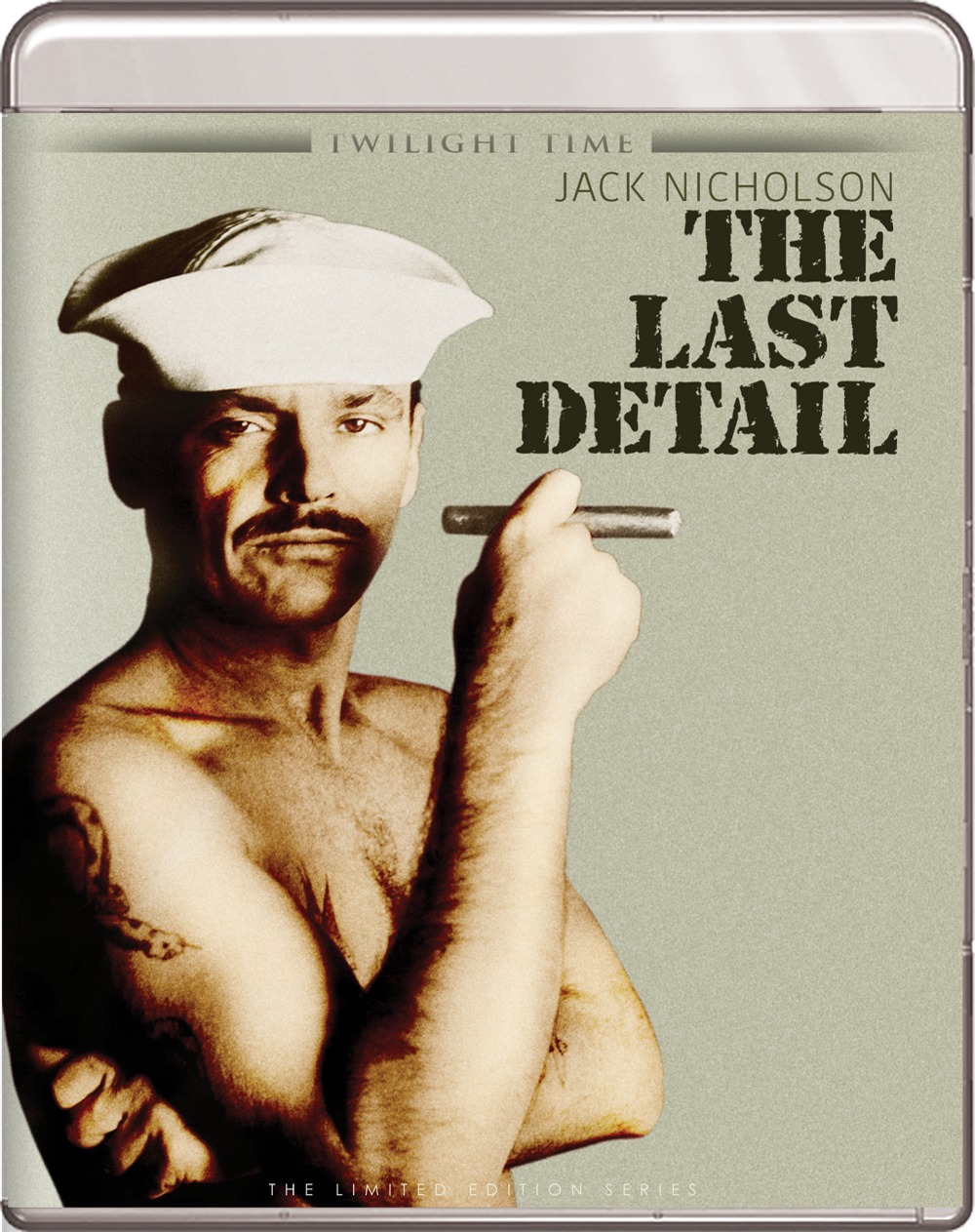