“Are we living in a land…where sex and horror are the new Gods?”

That’s some lyrics from Frankie Goes To Hollywood’s Two Tribes. A song that many people remember due to the music video (in which Ronald Reagan fights against USSR leader, Konstantin Chernenko, in a wrestling match) and the fact that this and Genesis’ Land of Confusion are two songs (and videos) that sum up the fear of 80’s Cold War pretty well. Nuclear War wasn’t a joke in this decade since both the USA and Soviet started the arms race again. The state of paranoia was reflected in movies such as The Day After or Red Dawn. That’s right, no matter how the ridiculous plot of the original Red Dawn is, it was made when citizens believed that what was depicted in the film could actually happen. This is why the Red Dawn remake is totally forgettable. The atmosphere and context between the wrath of the Soviets and (the questionable) North Korea are totally different. 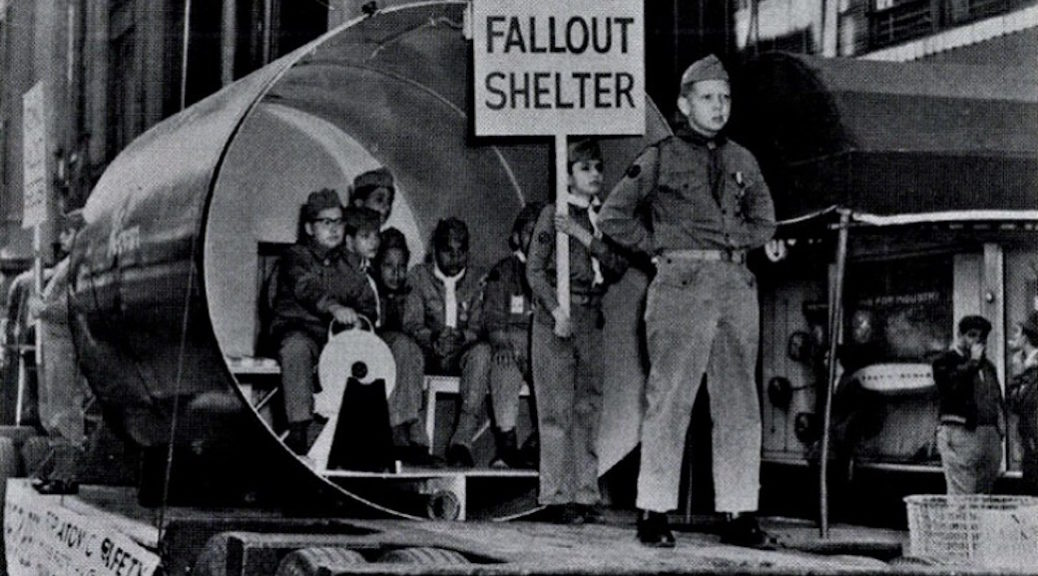 In the early 80’s there were different kinds of war protests out there. Perhaps the most prominent one was in the Hardcore Punk movement. Bands such as The Dead Kennedys and Bad Religion had criticized war throughout the years. And in 1982, an anti-war film called “The Atomic Cafe” was released. When I heard of the title and concept, I thought it was another goofy compilation of 50’s footage, with over the top films such as Red Nightmare or If Footmen Tire You What Will Horses Do? (in which I already reviewed on GCDB). But no. I cringed after finished watching it due to many reasons.

The Atomic Cafe chronicles America after World War II, from 1945 to the early 60’s, without narration or newly-shot interview segments like other documentaries. Instead, it accumulates motion pictures from that period, including PSAs, newsreels, radio clips, stock footage, TV shows and government-owned movies. The latter is the genesis of this film, since the filmmakers got an idea after reading a book that listed propaganda, training, and news films that were owned by the US government. They intended to do the film about this broad topic at first, but as time went on they chose a more specific topic, which was the atomic bomb and how its was presented in the media back then. Ironically enough, it fitted the tone of what was going on in the 80’s as well. 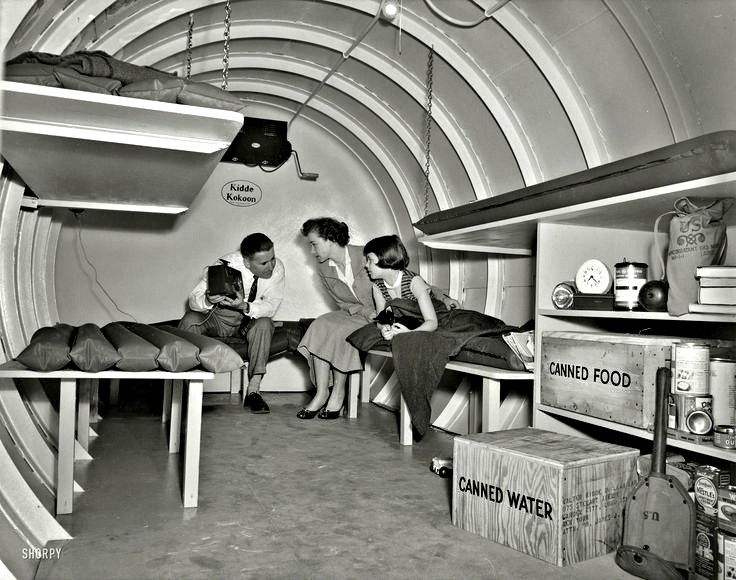 Before we take a look at some highlights from this film, I have one point to make. Contrary to what some people believe, this is not one of those “good old days” kinds of pictures, it presents another side of the 50’s that we might’ve never learned before. This decade is usually portrayed as the American Dream era, with the atmosphere like what you see on Leave it To Beaver or in American Graffiti, but was life in an age of Cold War THAT good? The answer that this movie indirectly tells us is “No.”

The Atomic Cafe presents important events about the Cold War from each year between 1945 and 1953 and then explores topics such as how to survive nuclear fallout or the way the government conducted the tests. It’s pretty hard to explain the film since it is edited in an ironic way. I realized this when I saw President Harry S.Truman tell us that “We thank God that it [nuclear weapon] has come to us, instead of to our enemies.” which is followed by a clip of the Nagasaki nuclear explosion and the pilot telling how dropping the bomb is his “greatest thrill”. Then later on, we see the story of the Rosenberg trial and execution. The montage tells us that these two people were traitors since they gave the Soviets details about a nuclear weapon. I decided to google this story since I’ve never heard about it before. To my surprise, there’s still a debate about whether Ethel Rosenberg was innocent. I mean, the evidence out there tells us that Julius, her husband, was actually a spy, but some people still wonder how much Ethel was actually involved in the plan and whether they deserved to be killed or not. Suddenly, I noticed the theme of this movie is “a fear that was played on our unknown.” Before you guys call me a Communist sympathizer (I’m not and I don’t believe in that ideology) but it makes me wonder about this and other things in the documentary and ask: was just the result of mass hysteria or it was actually lethal? 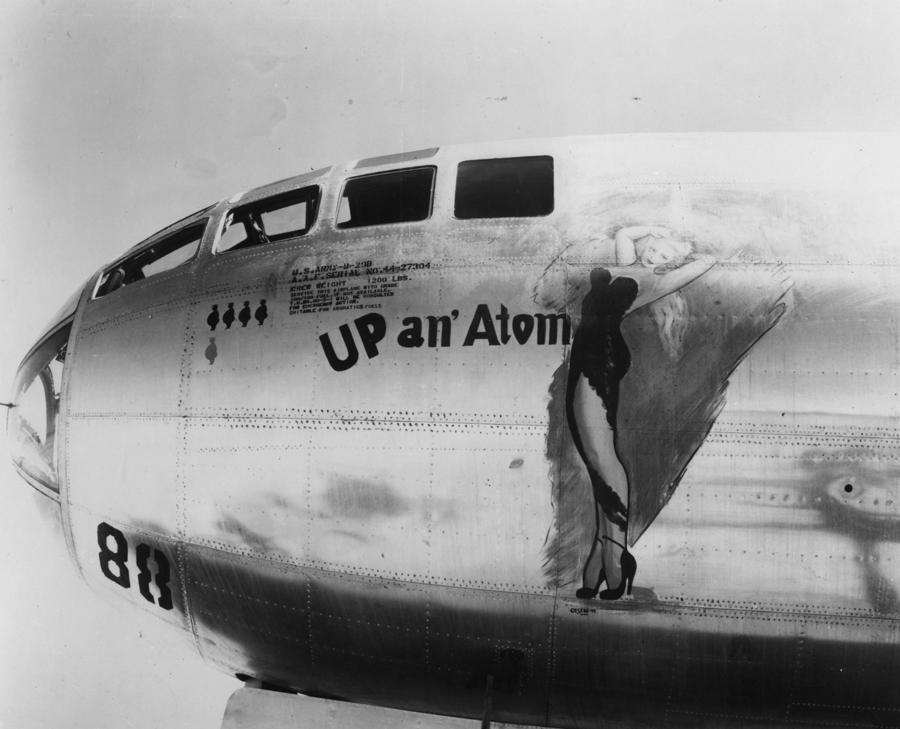 Some of the subtly terrifying highlights includes the nuclear bomb footage. We see Lewis Strauss (from Atomic Energy Commission) tell us about the nuclear test at Bikini Atoll. Unfortunately, since the wind didn’t carry the fallout away, the task force had to evacuate local citizens and provided medical supervisions. The footage of him talking about “well and happy” natives is intercut with pictures of people who were effected with health problems due to the test. Later, we see another nuclear test at a Nevada test site. This time, the troops hide in the bunker so that they could clearly see a giant mushroom cloud in front of them. Then, it cuts to the propaganda film that claims that the radiation has low penetration power. It can’t enter our skin, but is hazardous only through “breaks in the skin…or through the nose or mouth”. After that, it cuts to footage of St. George, Utah, a small town that’s near the test site. In the clip, the radio station warns everyone that “due to the change in wind direction, the residue from this mornings atomic detonation is drifitng in the direction of St. George”. Therefore, everyone should stay indoors so “there’s no danger”. Although it probably comes from a PSA film, the context here almost makes me believe that the broadcast might’ve actually happened back then. It creeps me out a little bit because it suddenly reminds me of the tragic story behind the 1956 film “The Conqueror”.

Although I’ve seen parts of that film and I hate it (due to the Shakespearean style of dialogue), but what happened in the production is far more interesting. This John Wayne epic was shot near St. George as well and, as years went by, the cast and crew of it passed away due to cancer. We can’t guarantee that they died due to radiation from the test, but the fact that there were 91 cancer cases in about 220 of the primary cast and crew I started wondering about the health conditions of a PERMANENT citizen who lived in St. George around that time. They were exposed to the unsafe environment more than the Hollywood crews.

Anyway, there are two other memorable moments in The Atomic Cafe. The first one is possibly the footage from a TV play about the danger of Communism. Our host warns audience that:

“Fortunately, we can move the clock backward. The time is not yet. Let us pray that it never happens….in our country”

If this was Rod Serling, his monologue would continuously bring up a cool punchline or tell us the dark side of humanity. But this is someone else, so he does a live commercial for two local stores… 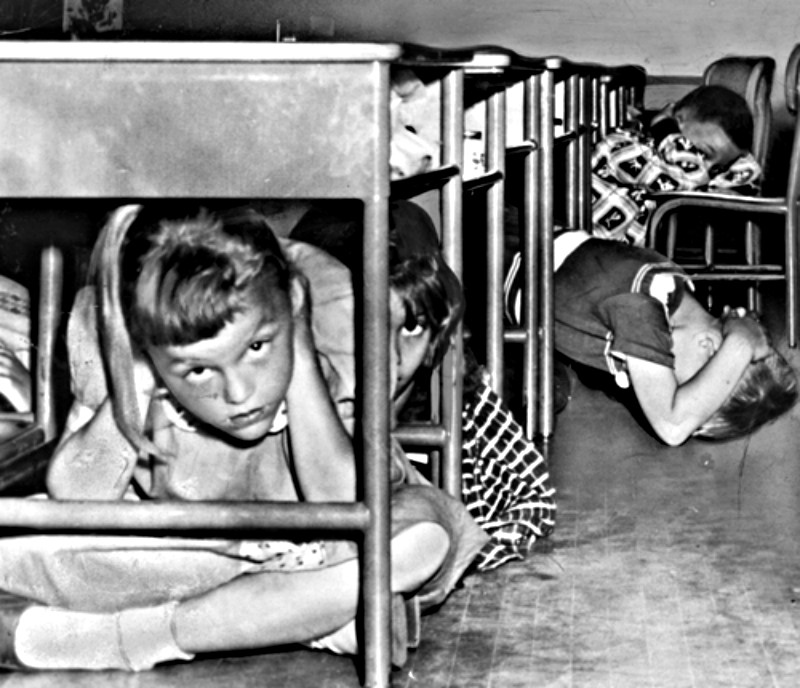 “Because they are concrete expressions of the practical idealism that build America. When you visit these two fine shopping centers, you’ll find more than four-score beautiful stores, the sparkling assortments, an attractive atmosphere, and, of course, plenty of free parking for all the cars that we capitalists seem to acquire. Who can help but contrast the beautiful, the practical setting of the Arcadia shopping hub and the Whittier Quad…with what you find under Communist?”

What can I say? This is one of those unintentionally funny moments that you can find here, but what the audience remembers about this film is the “Duck and Cover” short. Keep in mind that this was before the era of YouTube or the internet, so it was much harder to get a chance to see anything like this. Anyway, this “educational” film is famous for its catchy theme song that will be stuck in your head for days…and it’s also infamous for the content itself! The portions of the film presented here tell us to duck and cover after the atomic bomb explodes. It raises questions among the modern audience whether this tactic is actually useful or just a fear-mongering technique, considering there are other threats from heat and fallout that may not be protect by simply “duck and cover”. Well, the good news is that I found PDF version of Duck and Cover pamphlet and it tells you why this method can protect everyone… 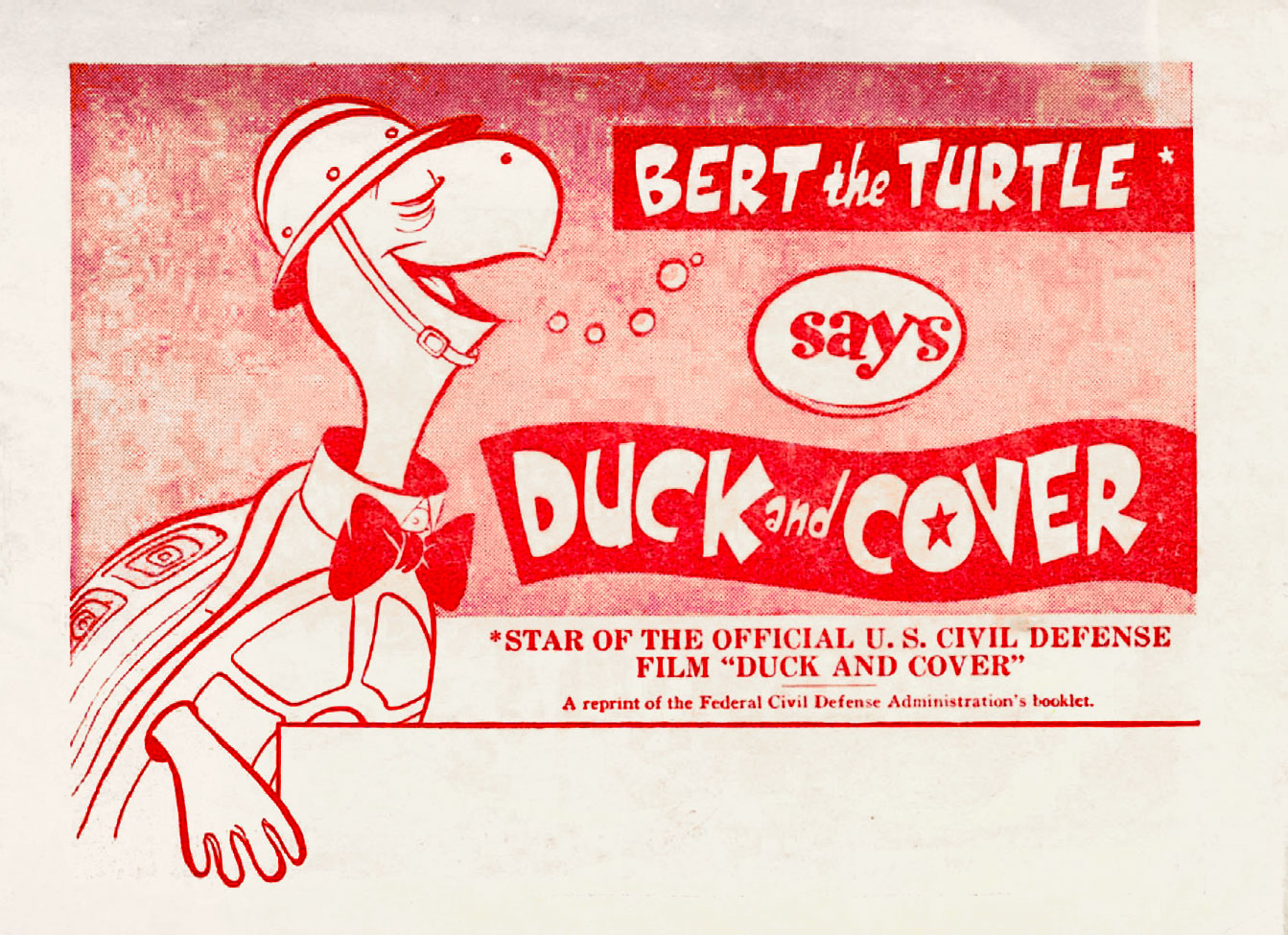 “The atomic bomb is a new danger. It explodes with a flash brighter than any you’ve ever seen. Things will be knocked down all over town, and, as in a big wind, they are blown through the air. YOU must be ready to protect yourself. So, like Bert, you DUCK to avoid the things flying through the air…and COVER to keep from getting cut or even badly injured.”

Again, this emphasizes the main idea of The Atomic Cafe. The government plays on your fear and knowledge. We have no idea about what they tell us and how “safety” plays into a nuclear attack. Nowadays, when nuclear becomes a scary word again, this is a chance for you to take a look in the past and question yourself about what you’ve heard in the media as well as threats out there. It’s a nice film to watch and intellectually discuss with your friends since, no matter what your political opinion is, we might not survive the next World War…if it actually happens.