After working together on the smash hit western Butch Cassidy and The Sundance Kid (1969), Director George Roy Hill, Robert Redford and Paul Newman teamed up again for The Sting (1973). The production was initially going to be directed by the screenwriter of the film David S. Ward, but after producers Tony Bill, Julia and Michael Phillips gave the screenplay to their friend Robert Redford to read, as much as he loved it, he was unsure about shooting it with a brand new director. The script found its way to his friend, George Roy Hill, who was working on Slaughterhouse Five at the time, he read it and was hooked. 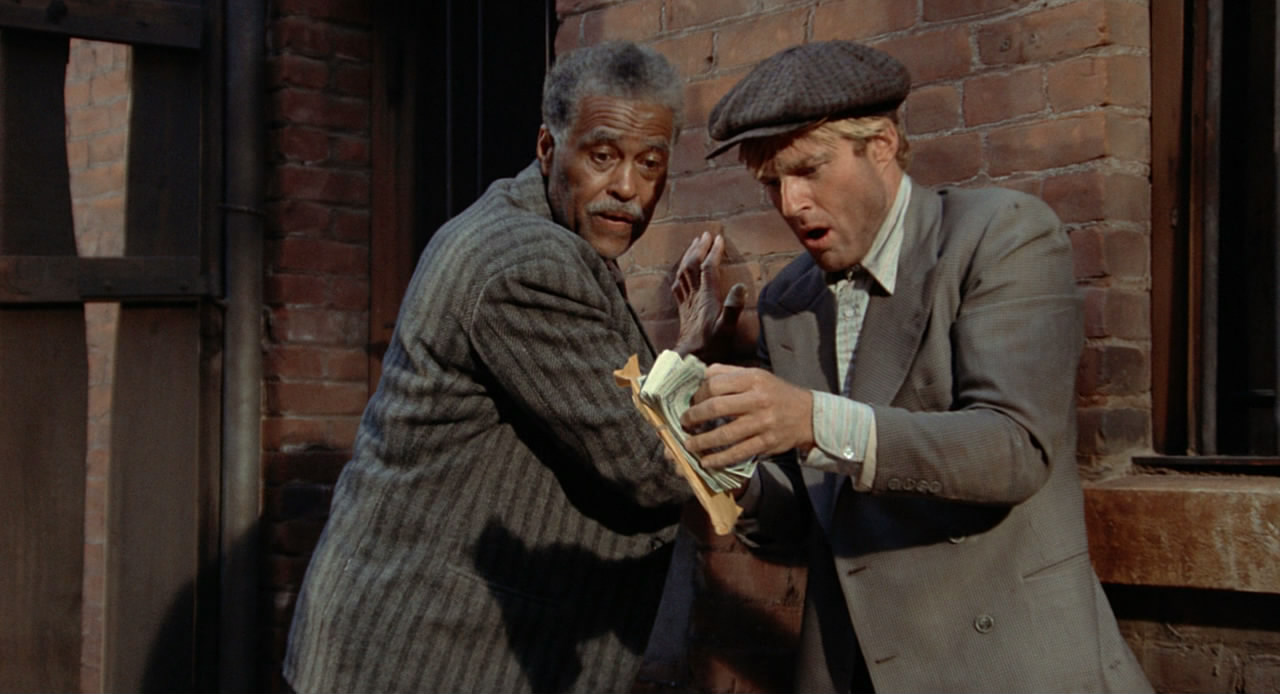 The producers brought George on board and Robert Redford agreed to star. When Paul Newman heard about this from talking with Hill, he became curious. Hill asked Paul if he would like a part and Paul wasn’t 100% sure at first, but after a snide comment made by Hill to Newman in an elevator, he realized he needed to take the part. 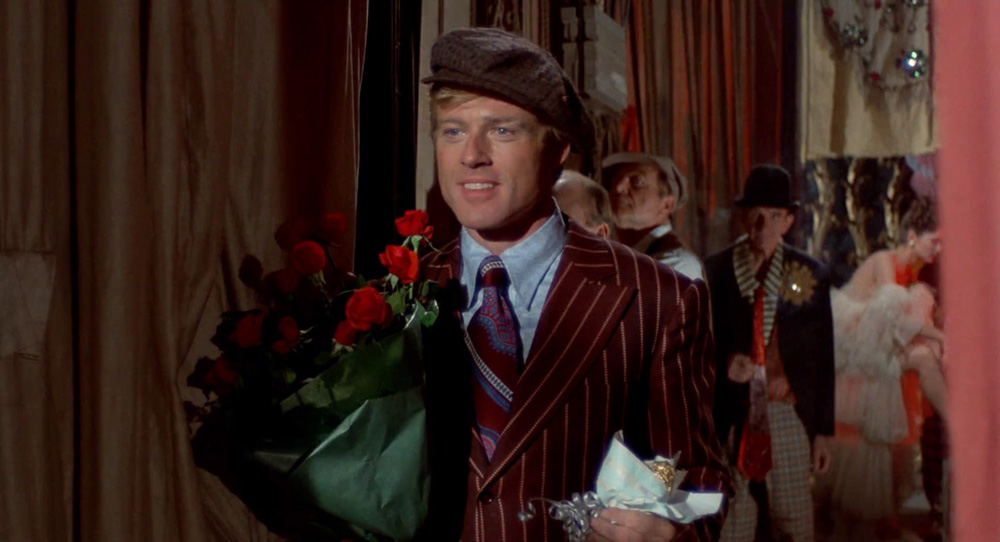 The Sting’s script was so well written that it got accolades from everyone involved. It still had to be scaled down a bit and edited when it went on screen, but the dialogue was perfect for the actors. Screenwriter David S. Ward did his homework on the “Confident Man” aka “Grifters” (hustlers) style of talking. He sprinkled the dialogue with grifting lingo, but didn’t overuse the language so as to not to confuse the audience. This helped clue the viewer in on the world of grifting and made them feel like they knew what was being discussed. 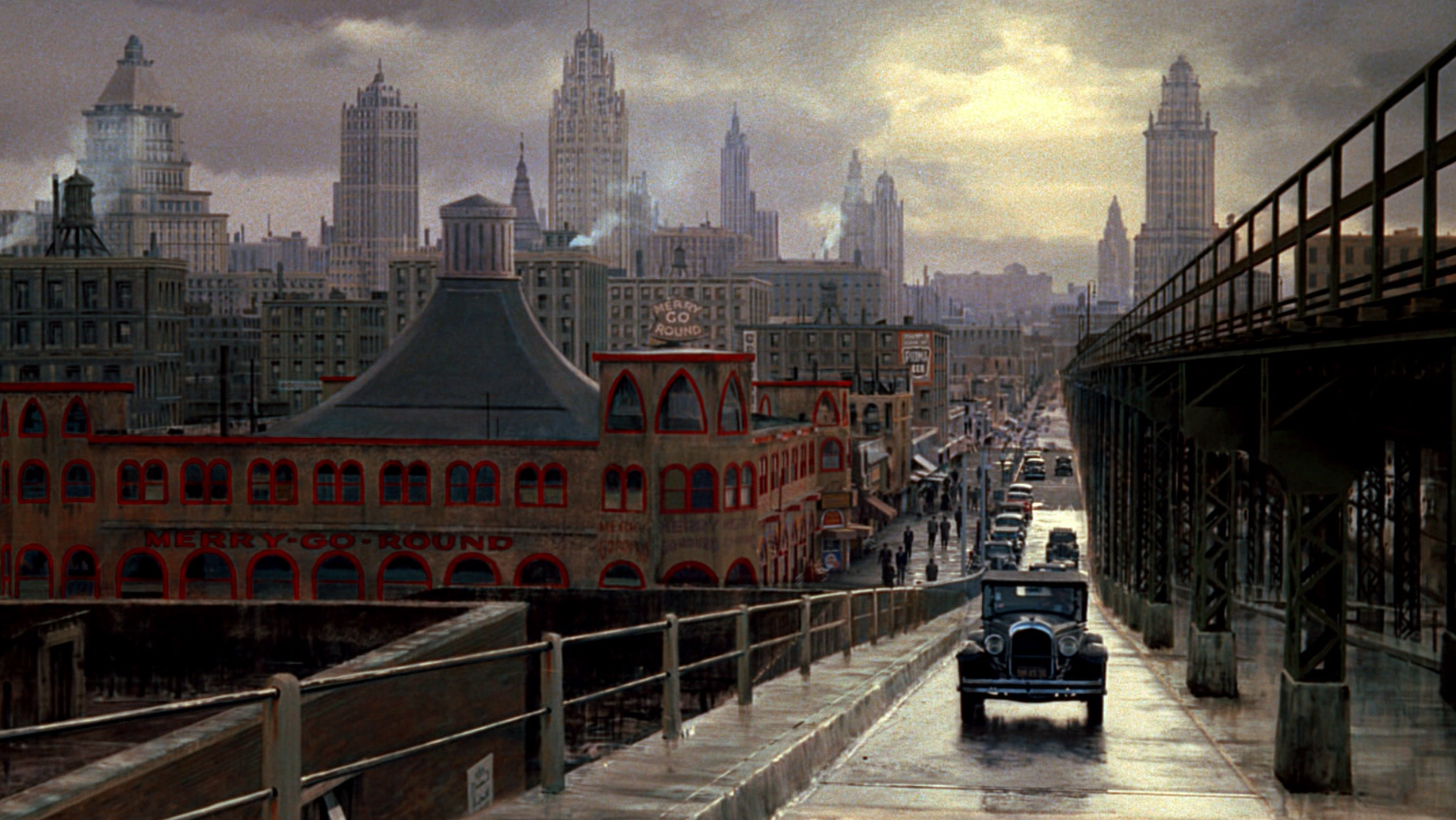 We first meet Johnny Hooker (Robert Redford) and his mentor Luther Coleman (Robert Earl Jones) who have set up a mark to take his money. With the help of The Erie Kid (Jack Kehoe), they pull off the sting like complete pros. Unbeknownst to them, the fellow they scammed works for Doyle Lonegan (Robert Shaw) a big wig banker who is known for his love of betting and killing. When word gets to Lonegan that one of his men has lost his money in a grifting scheme, Doyle sends his thugs to get Luther and Hooker. 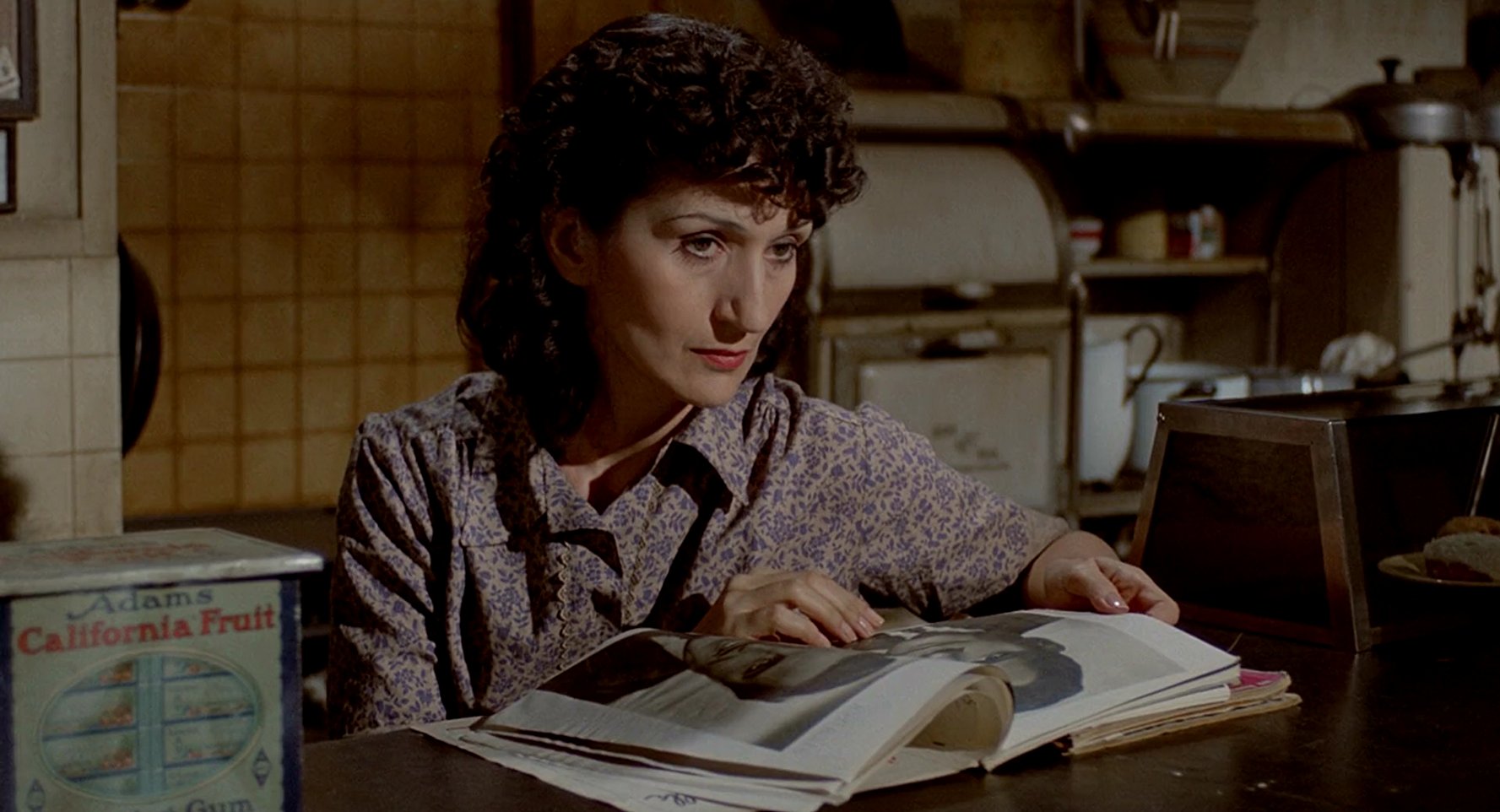 After getting all the cash from the thug, Hooker goes out and blows his share on clothes and a losing bet in a speak easy. When Hooker returns to Luther’s place, Luther already knows he’s lost all the money. Luther tells Hooker he’s come to a decision: he’s quitting the grifting business. Hooker is very disappointed, but Luther points him to an old friend that he knows will be a great secondary mentor for the brash young hustler. Hooker also has to contend with another problem: Lt. Snyder (Charles Durning) a beat cop who’s trying to get Hooker because of his known dirty dealings around town. 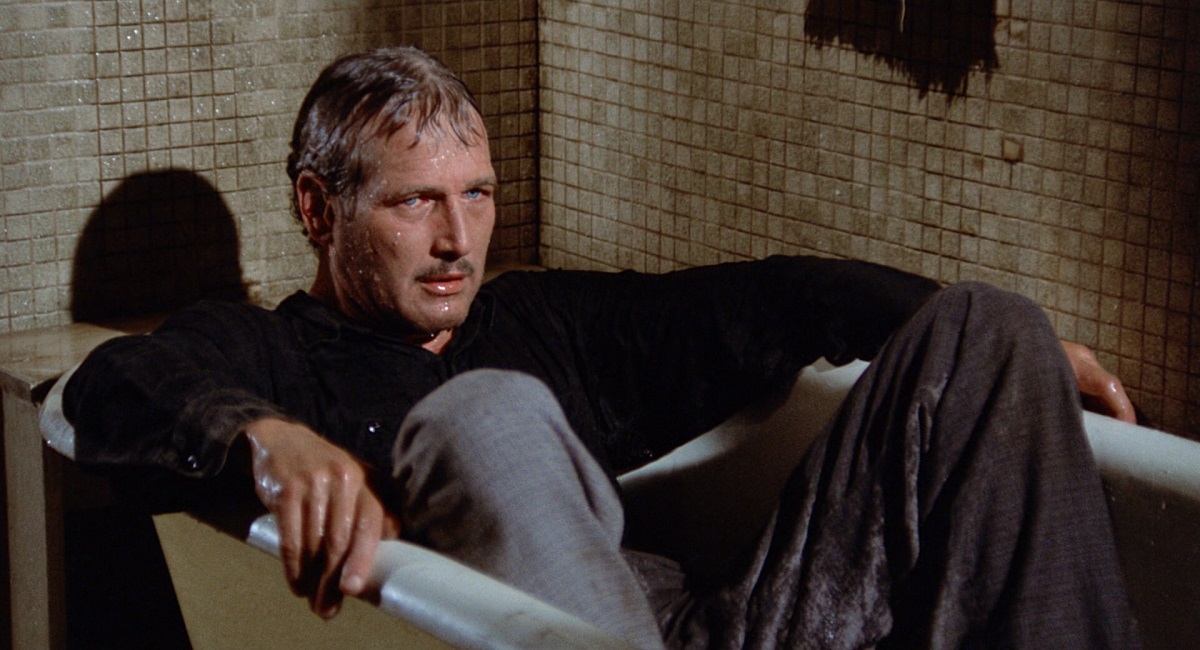 One night, Hooker goes to Luther’s house to see him and finds that he has been murdered. Hooker is very hurt by this, and when he finds out that it was Doyle Lonegan’s men who got payback for their scam, he has one thing on his mind: Revenge. Hooker then goes to see Luther’s old friend Henry Gondorff (Paul Newman) at his current place of work: a merry go round for kids. This is where we first see Billie (Eilleen Brennan) a woman who by day runs the merry go round with Gondorff and by night runs a speak easy/whorehouse. When Hooker finds Gondorff, he sees that he’s a a washed up drunk, passed out in between the bed and the wall. Hooker swiftly brings him to the tub and turns the shower on to wake him up. When Gondorff finally comes out of his drunken stupor, he and Hooker begin to discuss just what’s going on between them. They both decide their best course of action is a big score and their mark will be Doyle Lonegan. They will avenge Luther AND make a boatload of money. 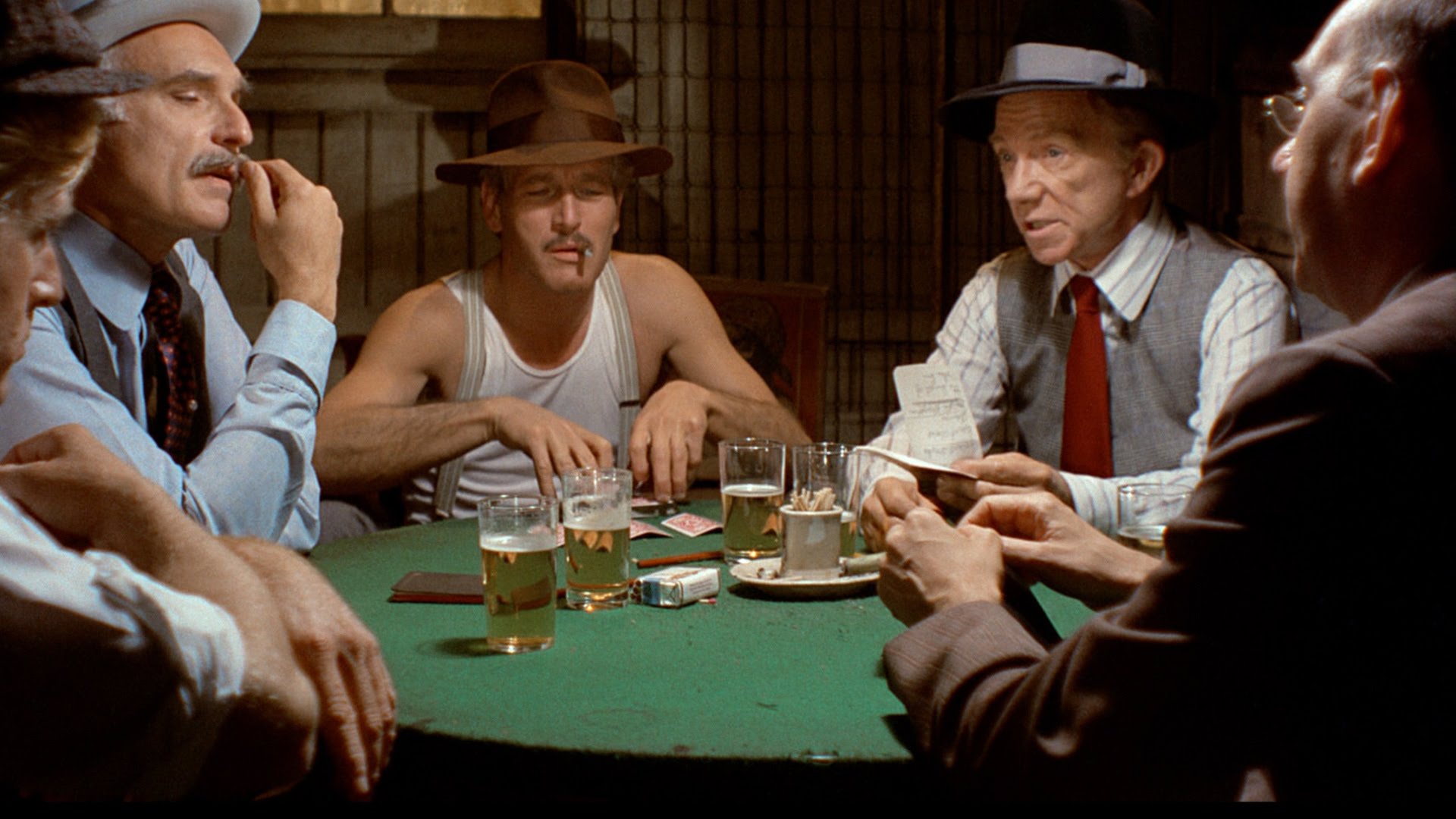 They know they can’t do it alone so they bring in fellow Chicago grifters like JJ Singleton (Ray Walston), Kid Twist (Harold Gould), Eddie Niles (John Heffernan) and The Erie Kid. They begin to set up a fake betting parlor downtown in an alleyway off the street. This is where the plan will go into full effect. First they have to have a “hook” to get Lonegan interested in going along with this sting. They find out that Lonegan loves to gamble and play poker. He often has a poker game on the train coming from NYC to Chicago, so Gondorff and Hooker decide to get into the game. Gondorff enters into the poker game and this sequence has some of the biggest laughs in the whole film. Gondorff’s fake character is Shaw, a crude, loudmouth who shows up at Lonegan’s gentleman’s poker game drunk (he’s faking it) with a bottle of gin and a head-cold. Gondorrf/Shaw annoys Lonegan and the other players by sneezing, blowing his nose on his tie and referring to Lonegan as “Lonneman” and “Linneman” which pisses Lonegan off terribly. Gondorff/Shaw wins every hand and really sticks it in Lonegan’s face laughing at him and telling him “thats what you get by playing poker with your head up your ass”. 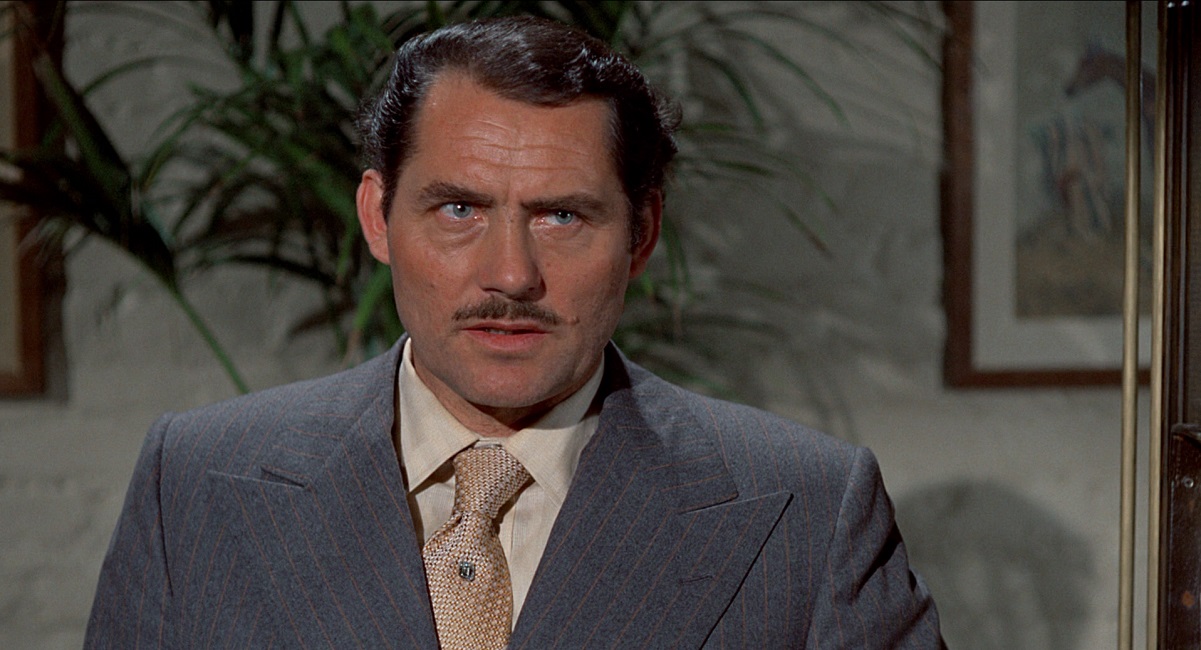 By the end of the game Lonegan is ready to explode, but Gondorff/Shaw pulls a hat trick, wins and Lonegan owes him $15,000. Lonegan can’t find his wallet (because its been picked from him). Gondorff uses this as another way to humiliate Lonegan telling him in front of the others “You always come to a game with your money!”. Gondorff /Shaw tells Lonegan he will send his boy to Lonegan’s cabin to pick up the money. Hooker is up next, so he shows up at Lonegan’s cabin, introduces himself as “Kelly” and explains to him that Gondorff/Shaw won because he cheated, which gets him a swift punch in the stomach by Lonegan. Hooker explains that he’s being honest with him because wants to take over Shaw’s operation, but he needs Lonegan’s help to do it. Lonegan tells him he will give him a lift home to hear more about this plan. On the way Hooker/Kelly tells him Lonegan needs to place a bet on the horse races at Gondorff/Shaws’s betting parlor. Lonegan tells him if he doesn’t show up at the rendezvous, then the plan is off. Hooker/Kelly agrees, but he knows Lonegan wants his own revenge on Gondorff/Shaw for what he’s done. When Lonegan shows up the next day at a diner to meet with Hooker/Kelly, things are falling into place. Gondorff, Hooker and their friends hook Lonegan perfectly by their choreographed booking parlor set up. 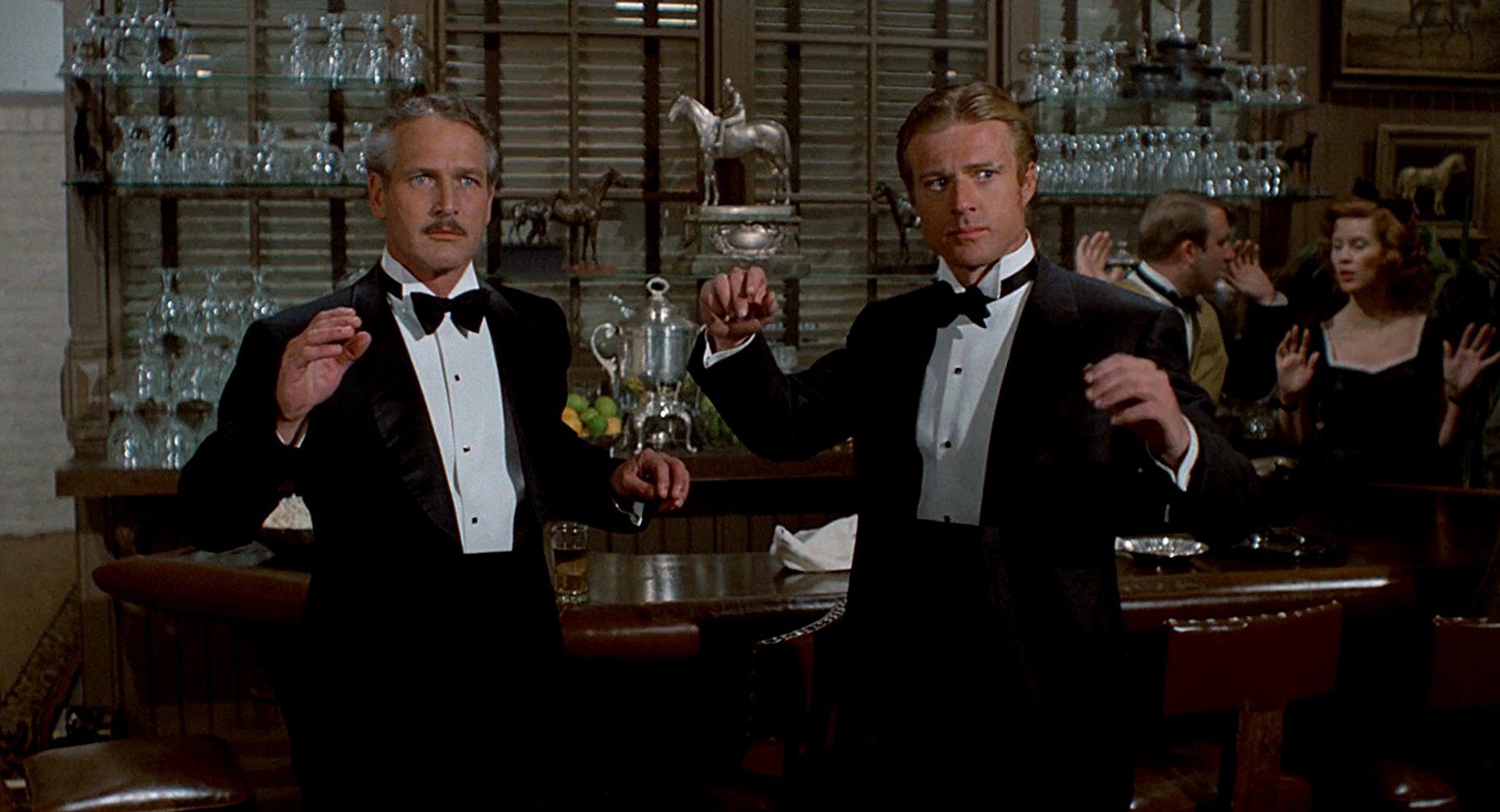 The Sting is directed masterfully by George Roy Hill and has excellent dialogue/acting. Hill uses old style Hollywood techniques and strangely enough he was also highly influenced by comic strips in the way they were paced tightly, box by box. There was a dispute about the music score early on because when Writer David S. Ward was doing the script, he was listening to 30s/40s Blues. George Roy Hill had a different idea, he wanted Ragtime. David S. Ward explained that Ragtime was older music which came out in the early teens and 20s, but after hearing and seeing Hill’s use of it in the scenes, he agreed it was a great choice.

Buy The Sting on BluRay 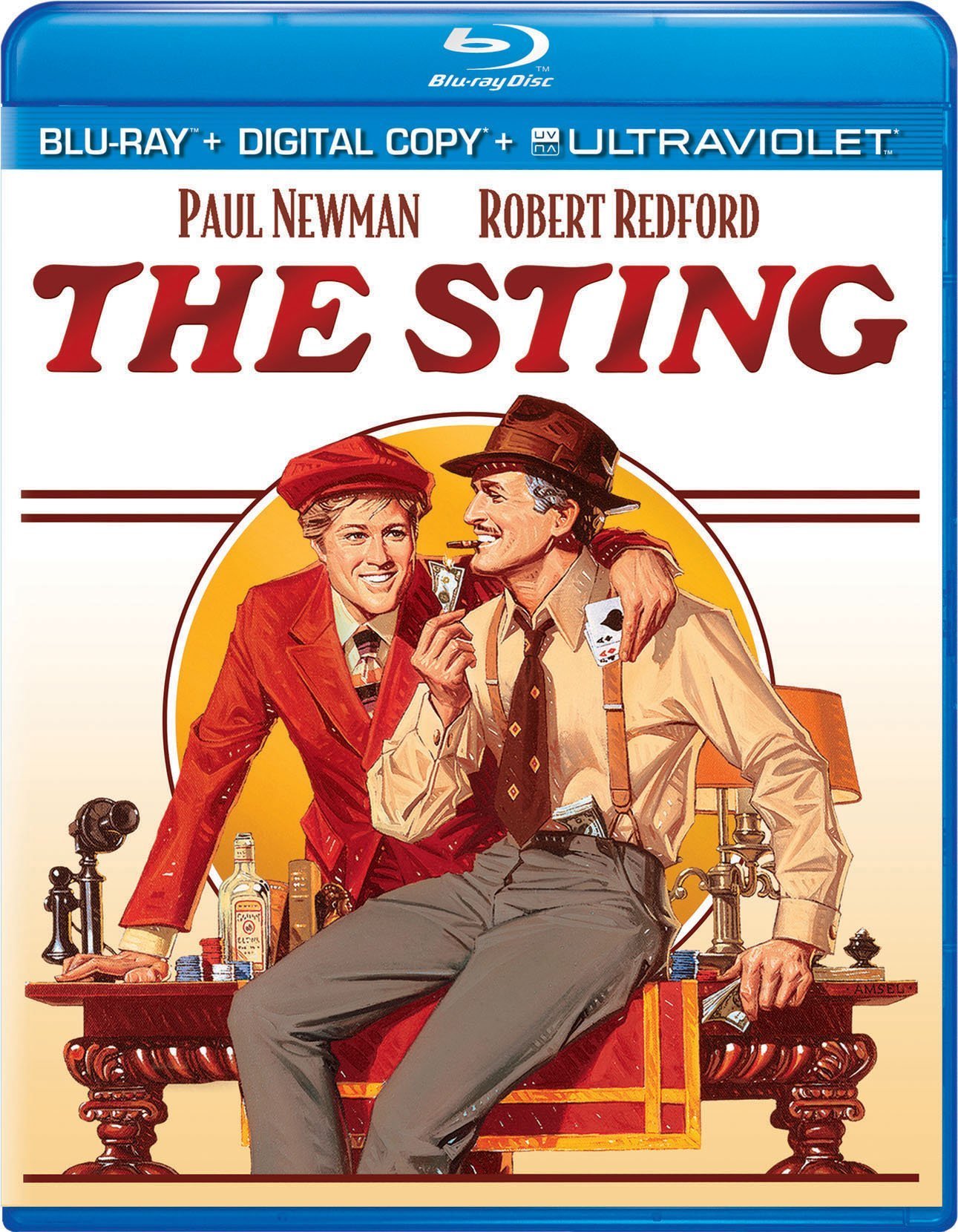