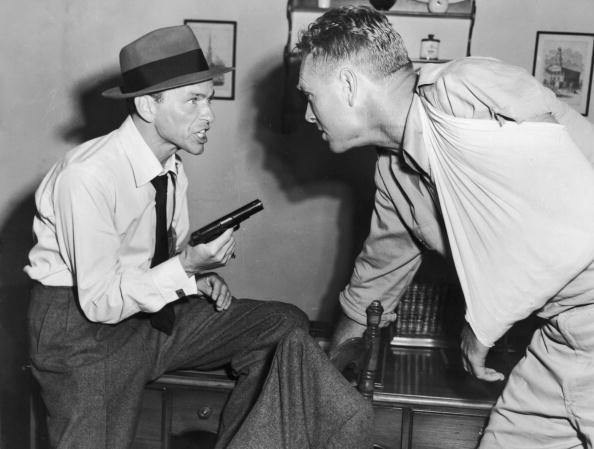 The most outstanding bit about Suddenly (1954, Dir. Lewis Allen) is its plotline. Gangsters led by Frank Sinatra’s John Baron hold up a family hostage in order to secure the perfect vantage point to assassinate their target, who happens to be the president of the United States of America.

Evocative of the Kennedy assassination, which took place nine years after this movie, it helps set the action pretty early on.

The Bensons: comprising of Ellen, a widow whose husband lost his life in the Second World War, her father-in-law ‘Pop’, a patriotic ex-secret service agent, and her son, ‘Pidge’, a sheltered kid with a desire for adventure are about to tune in for a Saturday evening of television when they are visited by three ‘FBI’ agents who take control of the house in order to prevent an assassination attempt on the US president.

However, soon after they are visited by Sterling Hayden’s Sheriff Todd Shaw, who is in love with Ellen, and head of Secret services Dan Carney, who has been trained by Pop, and a shoot-out ensues. It turns out that the agents weren’t what they claimed to be, and are the actual to-be assassins of the US president.

After this the family along with the injured sheriff are taken hostage, even as their kidnappers set about on their plan to assassinate the American president.

It becomes clear that the well-paid assassins act on impulsion rather than methodical planning. The sheriff is able to punch holes in Baron’s supposedly fool-proof escape plan by reminding him that the jet planes can easily get hold of his lot before they leave the country.

The script isn’t the movie’s strongest suit with Sinatra’s war veteran mentioning his ‘silver star’ feat on innumerable occasions. The point was clearly to let everyone know the violence obsessed psychopath that Baron is, but it was something which could have been conveyed in a better manner.

Another example of the same is the fact that the well-paid gangsters clearly didn’t recce the area, and figure out that the house they are about to take over belongs to an ex-secret service agent!

Sinatra however is able to hold the movie together with a very decent portrayal of a disturbed individual. His is the most fleshed out character, we get to know the most about him throughout the film. Baron reveals perhaps a bit too much about himself, especially for a person who wants to assassinate the leader of a nation and then flee.

Gradually it becomes clear that Baron is in it for the thrill of the job.

Even after his co-conspirators aren’t too sure about the entire plan, Baron keeps pushing ahead just so that he can get one shot at the president.

At the same time, Baron keeps putting before us interesting questions; when pushed around by the patriots (Todd and the Bensons) around him he questions as to why killing in a war is given a different value to one which is done otherwise. This is to justify his own ends but an interesting quandary nevertheless.

“In the war you do a lot of chopping and you get a medal for it, you come back and do the same thing and they try to fry you for it”

He also discusses the social circumstances around his upbringing, which led him to becoming a broken man.

The idea of murdering the president which seems so outlandish to the small-town folks of Suddenly, is nothing more than a mere job for Baron.

He is also aware of political system in operation, and on occasions fails to understand what the entire fuss is about. He even goes ahead to mock his employers stating they are the ones to lose out on this deal, since a new president would be appointed soon after.

Sinatra is able to portray a cold-blooded killer, albeit one aware of his circumstances, in a remarkable fashion.

In the end, Suddenly has a simple if limited plot, and does well to stick by it.

Unlike say High Noon, another movie where an important character’s arrival is followed, the actual moment of arrival here is quite anticlimactic and tame.

The focus and emotions are supposed to be centred around the vulnerable Bensons, so much so that bravery and sacrifices of other characters are side-tracked and only given a small mention towards the end.

Patriotism is an important element of the story, but it doesn’t entirely become a preachy sermon because the focus shifts on the assassination plan pretty early on.