The Treasure of The Sierra Madre

Director John Huston’s 1948 masterpiece The Treasure of The Sierra Madre is a morality tale disguised as an adventure film. It opens in 1920s Mexico, the town of Tampico. Fred C. Dobbs (Humphrey Bogart) casually asks any American he sees to take him for a meal (look for a cameo by John Huston as the kind soul that gives Dobbs several pesos). Dobbs stops in a local park to take a rest and there he meets a fellow expatriate named Curtin (Tim Holt) and the two chat awhile about being broke. 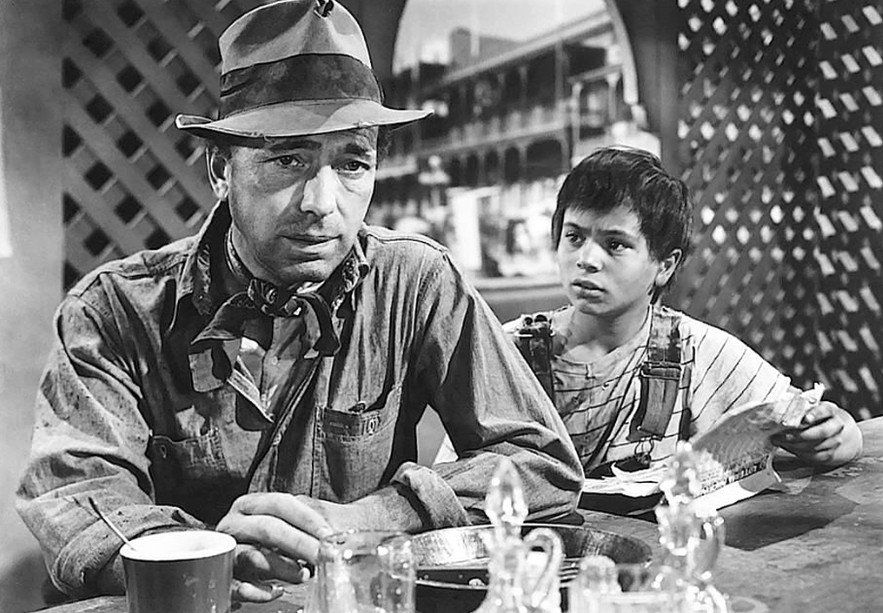 While sitting in a cantina, Dobbs is bothered by a small Mexican boy (a young Robert Blake) who is selling tickets to enter clients in a 200 peso sweepstakes. Dobbs gives the kid a couple pesos to get him off his back after rudely splashing him in the face with water. Dobbs is now out of money and asks another American coming out of a bar for a hand out. The man is Pat McCormick (Barton MacLane) and he refuses but tells Dobbs that if he wants to earn some money he’s got a job opening. Dobbs shows up at the docks where a large group of men are waiting and runs into his friend Curtin. They board the barge and take off to work on a site. They toil for weeks in the hot sun and when they get back to Tampico, McCormick tells them that the money holder hasn’t shown up so he’s going to check it out and return right away. Dobbs and Curtin beg him for a few pesos to get something to drink and a place to sleep so he gives them something to hold them over. 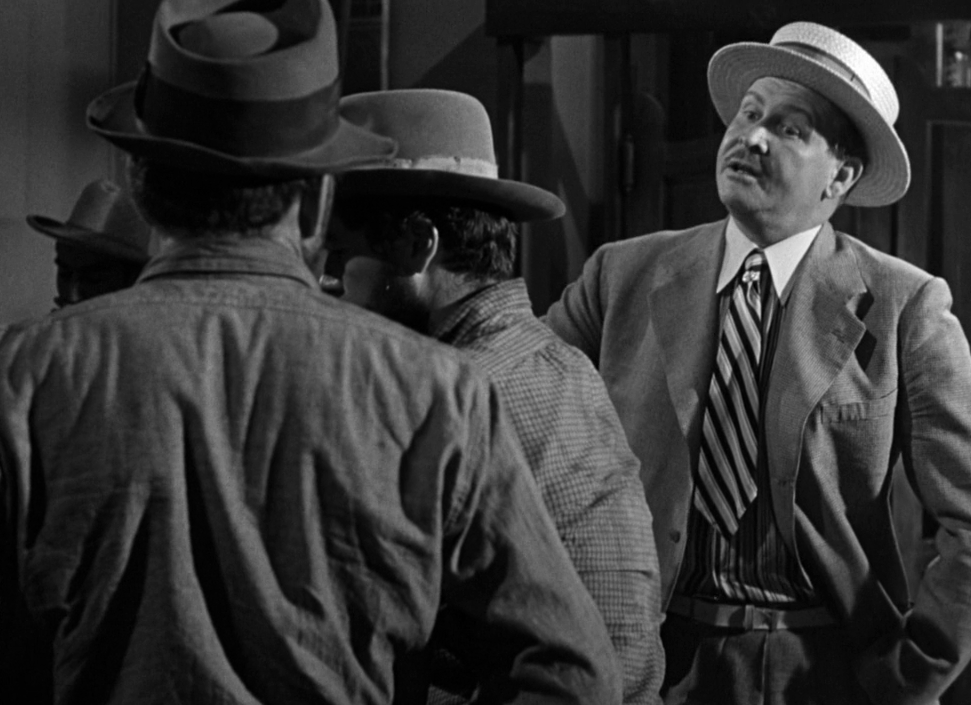 At the local bar, Dobbs and Curtin have a few beers and talk about their bad luck. Another patron hears Dobbs and Curtin talking about McCormick and how he picks dumb guys to work for him and never pays them back. The boys know they’ve been had so they get a couple cots at a local “down and outer”, called the “Oso Negro”, and run into an old man named Howard (Walter Huston) who is telling the other folks about his days as a gold miner. The three men then discuss what they would do if they had some gold. 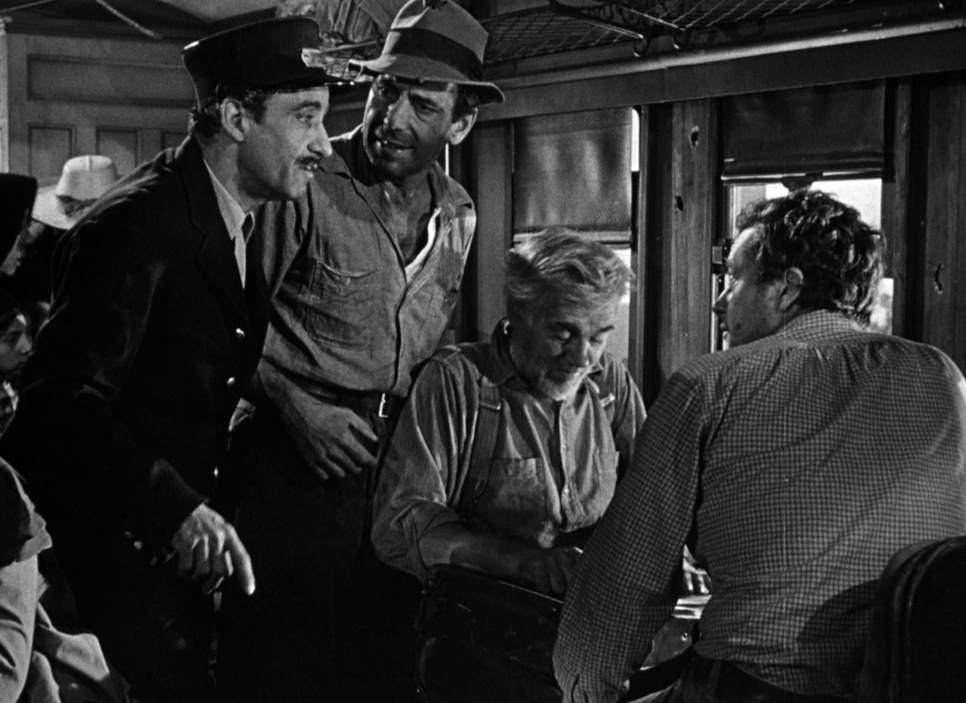 The next day Dobbs and Curtin spot their old friend Pat McCormick walking down the street with a pretty woman. They walk over and confront him and he tries to play it down like he was looking for THEM. McCormick invites them to a bar for a few drinks and as they sip their brandy Pat coldcocks Curtin with a bottle and knocks Dobbs out. This erupts into a big bar brawl. Finally after knocking McCormick down, the two men pull out his wallet and take the money they never received. That night, Dobbs and Curtin meet up with Howard again at the Oso Negro Rooming House and they put their money together and decide to go searching for gold. The only problem is, they don’t have quite enough. Suddenly, the little Mexican boy shows up and explains to Dobbs he has won the 200 peso prize. Dobbs is so excited he takes the money and adds it to Curtin and Howard’s pile. The three are ready to go on their adventure. 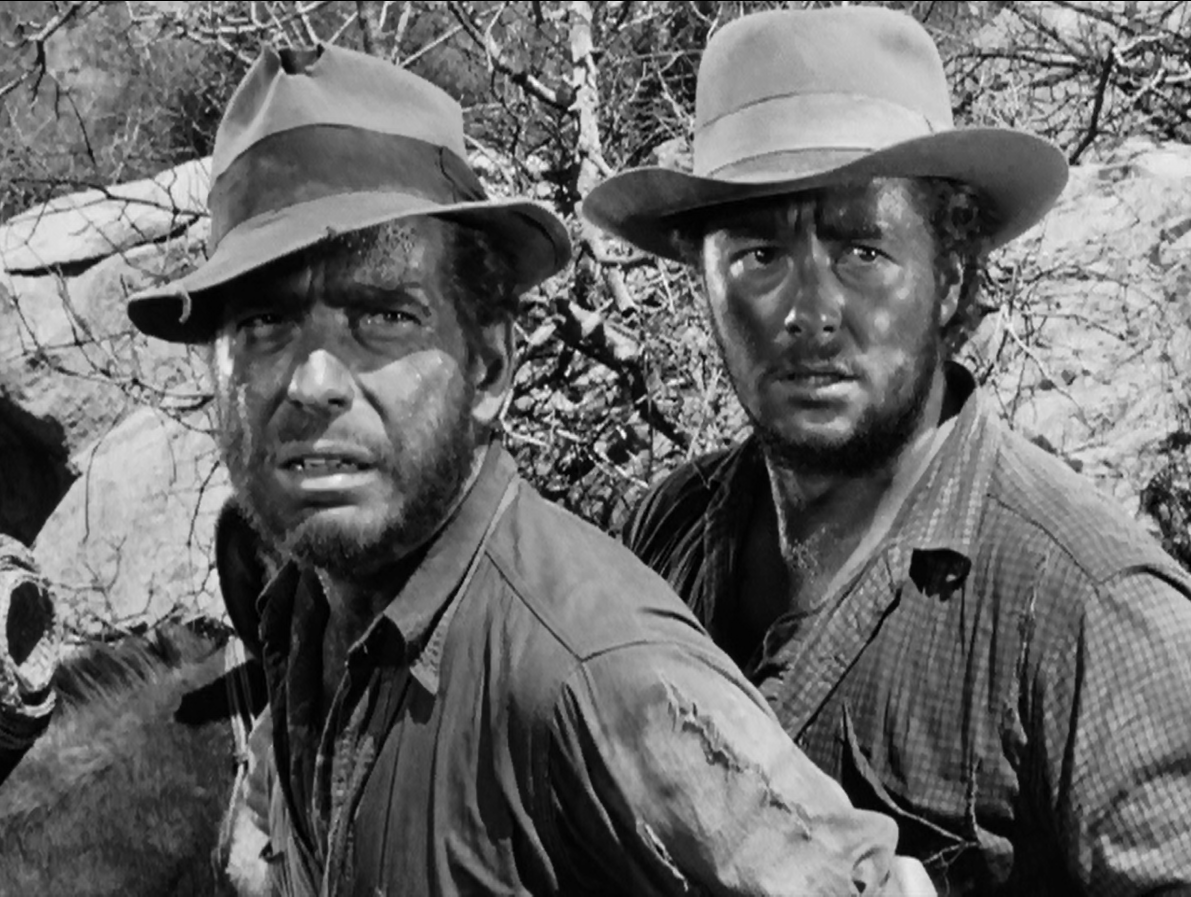 The men take a train out into the deep countryside of Mexico. On the way, a group of bandits try to hijack it, but the men along with other passengers defend themselves, shooting and killing several of the bandits. After walking for miles through the rough terrain and hills, they finally come across some gold dust in one of the most memorable scenes in film history as Howard dances in sheer joy. The three start out as good pals, but Dobbs in particular begins to grow extremely paranoid and greedy as the piles of gold dust grow larger. Since Howard is an old hand at looking for gold he knows the effects of this kind of greed all too well. 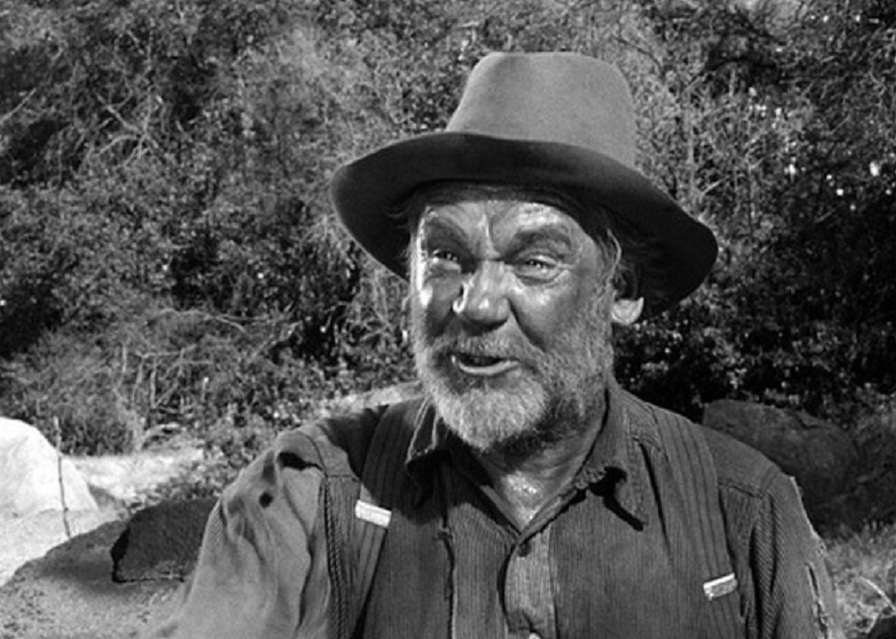 The men have a run in with another drifter named Cody (Bruce Bennett) who follows Curtin back to the camp after seeing him in town where he is getting some supplies. He shows up as the men are sitting around their campfire. Dobbs is a mad dog and nearly foaming at the mouth, he’s ready to kill anyone who comes near his gold. These scenes are some of Bogey’s most intense of all his films. The next day, the three men decide they have to get rid of Cody, but before they can do that, they spot a large group of banditos coming up the mountainside. The men temporarily team up with Cody to hold off these desperados. When one of the banditos (Alfonso Bedoya) ask the Americans for a gun in exchange for a cheap watch, Howard answers this request with a bullet through the center of the watch. This is one of the most iconic scenes which includes the famous “We don’t need any stinking badges!” line. 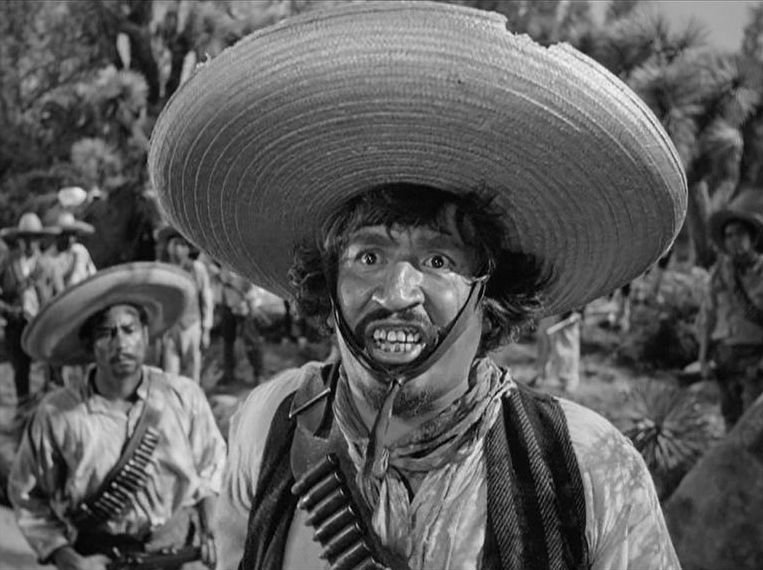 After the gunfight is over due to some mounties chasing the bandits out of there, the three men find Cody has been killed from a gunshot and they find a note from Cody’s wife that exclaims that even without any gold they are the richest people on earth because they love each other. The three men decide that they’ll contact Cody’s wife when they get back to town. They realize that they’ve got as much gold as they’re going to get and decide to leave the camp. Howard explains that before they go they have to “close the mountains wounds”. Dobbs and Curtin find this strange but agree and help Howard restore the hillside to the way it was when they found it. As the men make their way back to town they stop one night to rest. A dark figure appears, its a Mexican man. The three offer him some coffee and tobacco and the Mexican man explains a local child has fallen into a coma after a swimming accident and they need help. Howard agrees to go back to the Mexican village to assist them. Miraculously, Howard brings the boy back to life and the villagers are overwhelmed with relief and happiness. 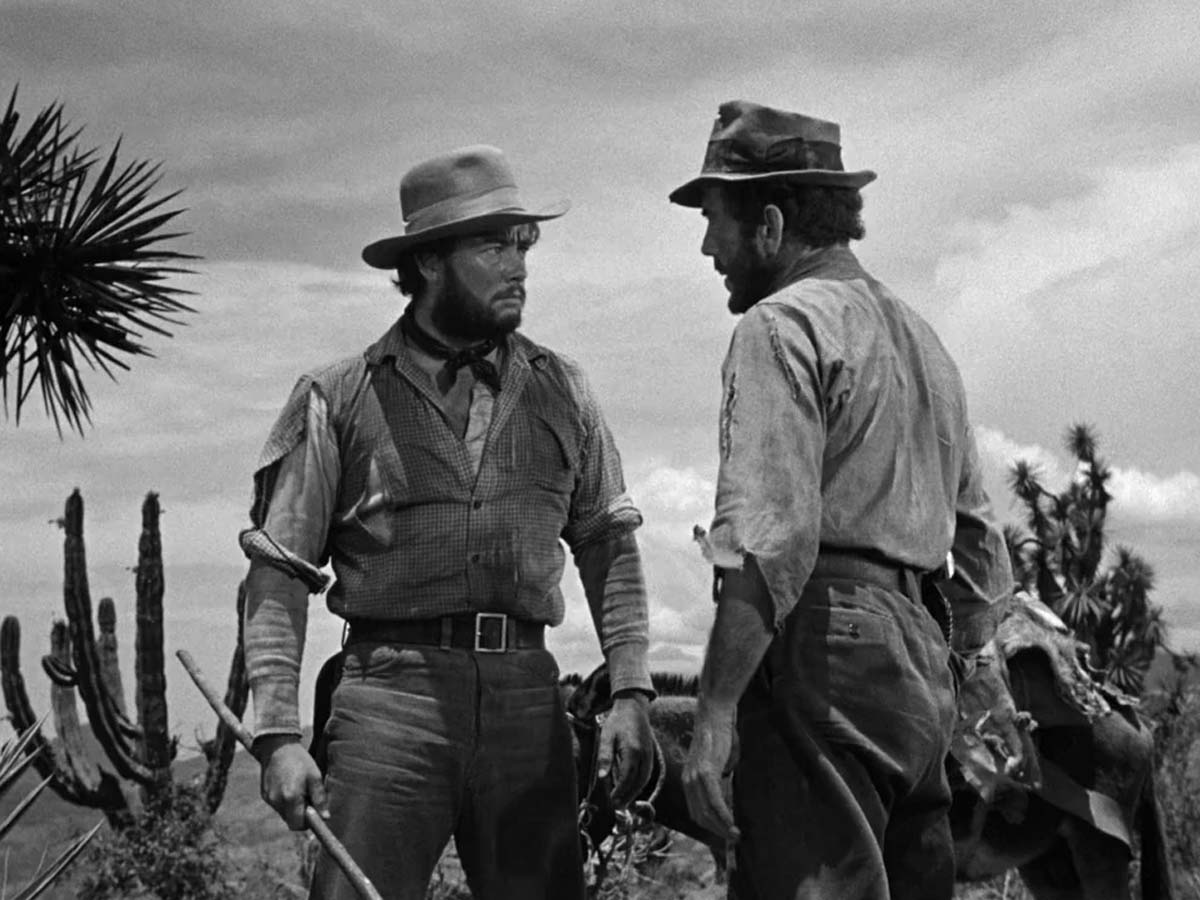 Dobbs, Curtin and Howard head down the trail and the Mexicans show up again and ask Howard to come back with them so he can be treated as a hero. Dobbs gets a little annoyed at this, but soon finds out he better let Howard go since they’d see it as an insult if he didn’t. Howard puts his trust and his share of gold in to Dobbs and Curtin’s hands and tells them he’ll meet up with them later on. Dobbs and Curtin continue on. While resting that night around their campfire, Dobbs begins to laugh maniacally. Curtin finds out that Dobbs plans on taking Howard’s gold, leaving him high and dry. Dobbs has now completely snapped and Curtin tells him that he won’t let him take the gold and then pulls a gun on Dobbs. This finally pits the two friends against each other as Dobbs bets Curtin he cant stay awake. Dobbs looks for any chance to bushwhack Curtin when he begins falling asleep. The paranoia has completely flipped Dobbs out and without Howard around, Curtin must try to outlast his friend turned foe as they head towards civilization. 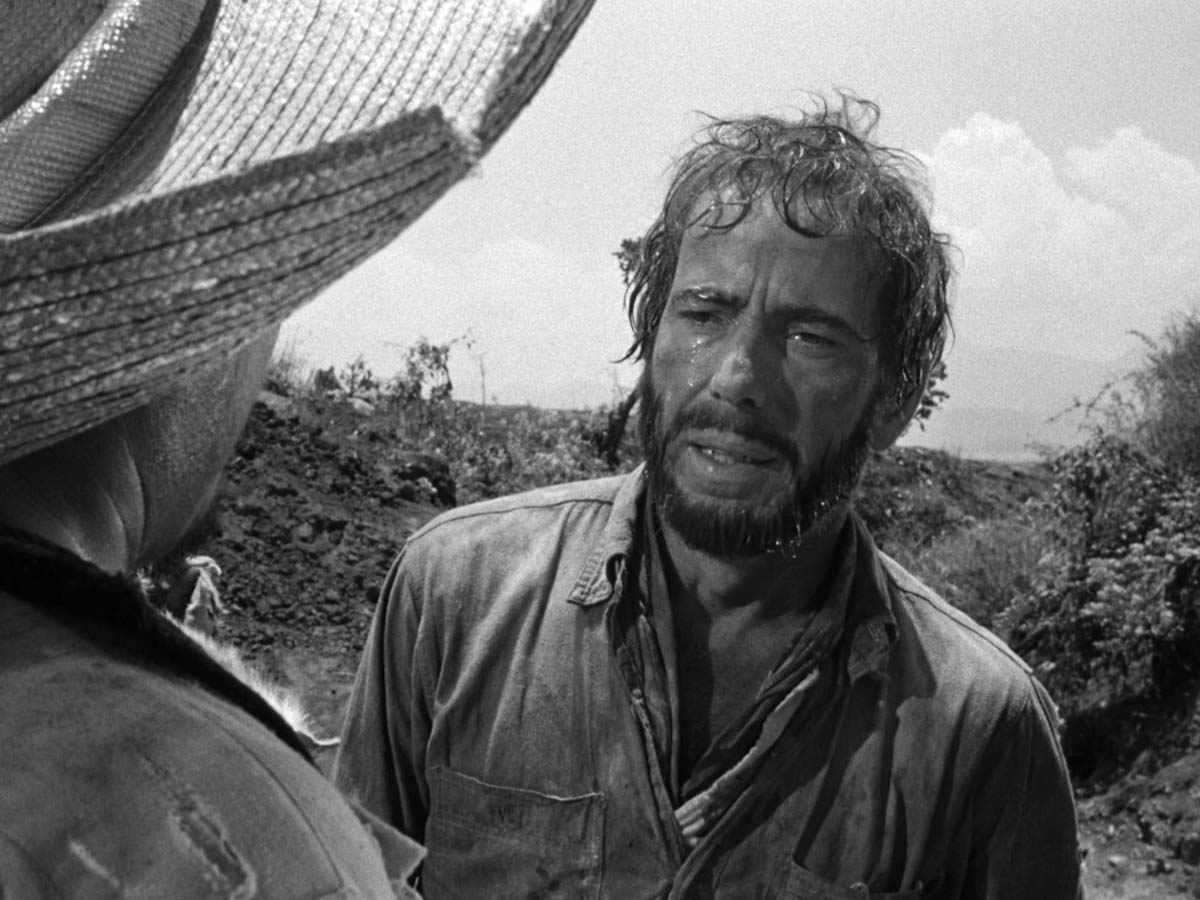 One of the most memorable features in the film besides the superb performances is Max Steiner’s music which is a wonderful mix of adventurous and playful cues. As the mood of the film gets darker, the tone of the music changes into something ominous and treacherous. This was some of the best film scoring ever produced.

Buy The Treasure of The Sierra Madre on BluRay 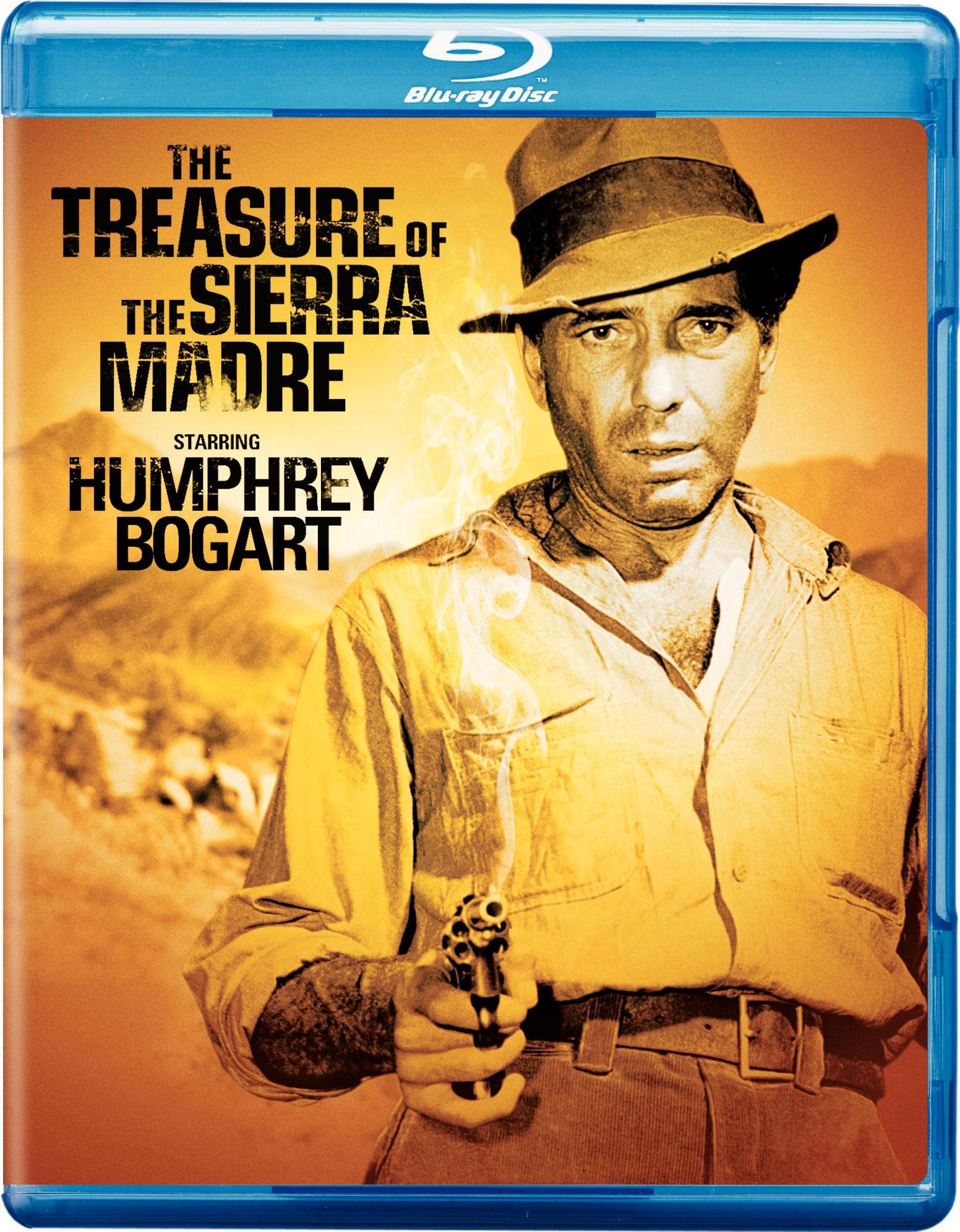