Happy Thanksgiving! As someone who grew up and still lives in a non-Christian country, I don’t think I relate that much to the tradition and customs on this particular day. Luckily, this day reminds me of three things. First, the awesome fake trailer for a non-existant slasher film called “Thanksgiving”. It’s directed by Eli Roth and featured in the full-length version of Grindhouse. The trailer itself is badass and I hope Eli will adapt it into a motion picture soon. Next, it’s Black Friday. It’s always fun to see how people react when they arrive at the mall. Moreover, different continents have their own style of shopping madness. While Americans have the “Royal Rumble” style chaos, Europeans don’t have to wait in long queue and they can walk happily into the shop! As someone who studied in Marketing, this is an interesting consumerism phenomena, whether you view this as a time to buy things cheaper or you think this is the brainwashing scenario like in They Live. 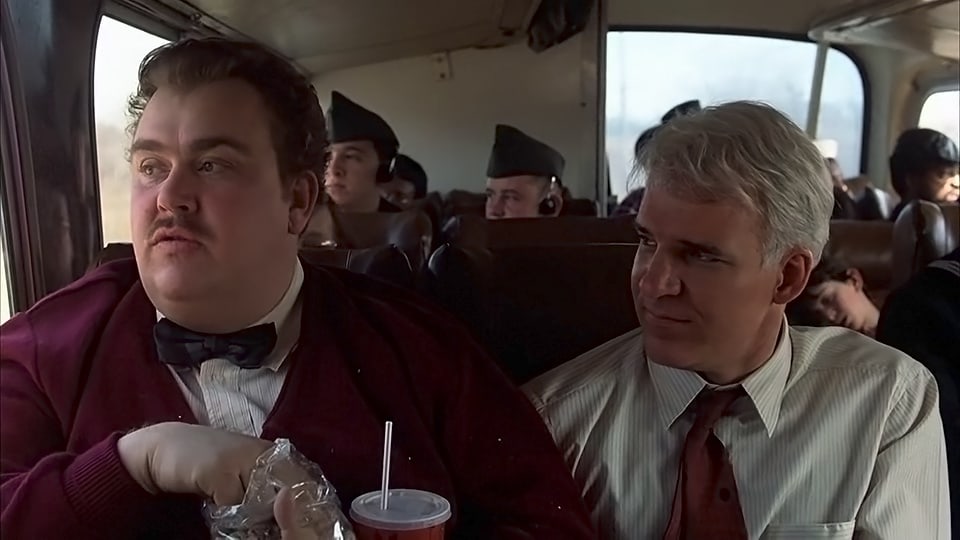 And, finally, Thanksgiving reminds me of a particular film from 1987 that’s charming and has a lot more to offer than comedic sequences. It’s Planes, Trains and Automobiles! At face value, this looks like another wacky comedy about clashes of personalities and how two completely different people are forced to live with each other. However, this film has a deeper meaning to me.

Steve Martin plays Neal Page, an executive who works for an advertising company. He promises everyone that he’ll be home by Thanksgiving. Unfortunately, everything (I repeat, EVERYTHING) doesn’t go according to the plan. Along the way, he meets Del Griffith (played by SCTV legend, John Candy). While Neal is a perfectionist and grumpy guy, Del is a lot more cheerful and talkative (although he regularly behaves recklessly). They have to deal with not only their opposite spectrum of behavior, but also the insane situations (such as delayed flights, stolen money, the car they try to rent is not available, etc.) that lead them to travel by plane, train, and automobiles. At later parts in this film, we learn more about their character backgrounds and what is important to each man. 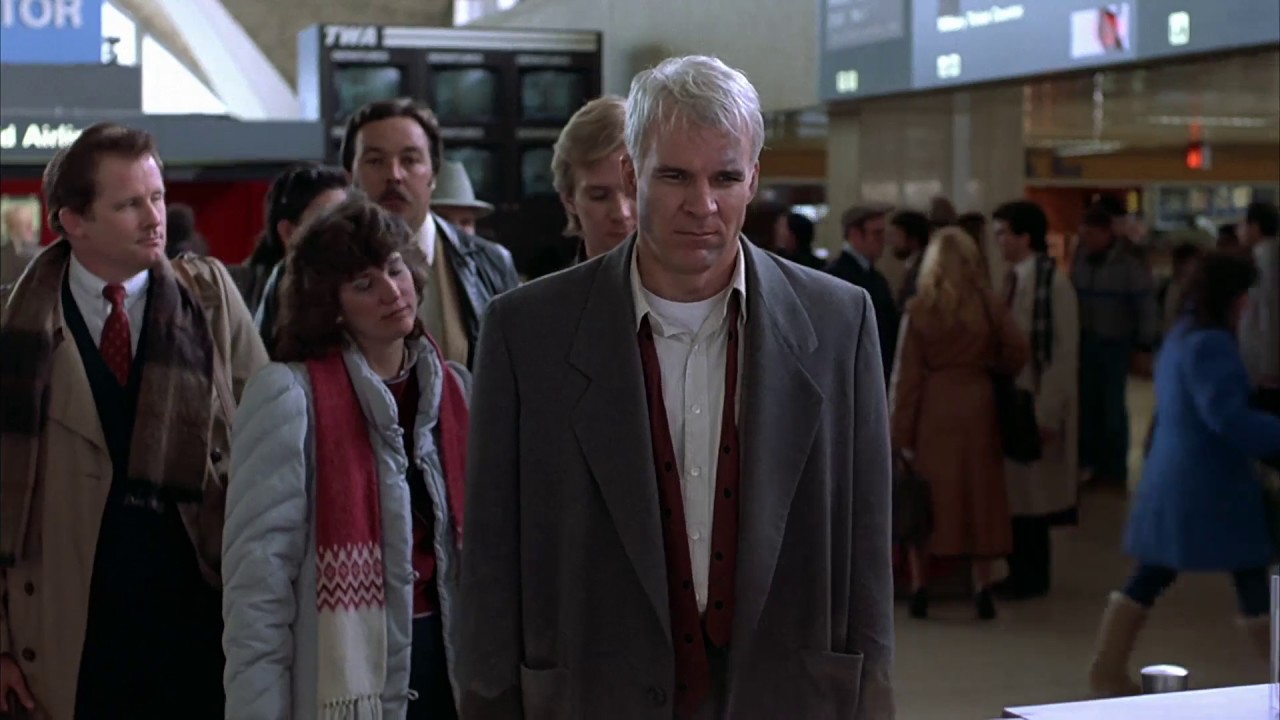 This is one of the films I try to watch whenever I’m in a bad mood since this film provides a perfect example of what happens when you solve the problem when you are angry. Take a look at the legendary scene in which Neal tries to rent a car, but the car isn’t there. Due to his bad mood, instead of properly collect all evidence and inform staff politely about the problem, this is what happens:

Car Rental Agent: Welcome to Marathon. May I help you?
Neal: [indignantly] Yes.
Agent: How may I help you?
Neal: You can start by wiping that fucking dumbass smile off your rosy fucking cheeks. Then you can give me a fucking automobile. A fucking Datsun, a fucking Toyota, a fucking Mustang, a fucking Buick — 4 fucking wheels and a seat!
Agent: I really don’t care for the way you’re speaking to me.
Neal: And I really don’t care for the way your company left me in the middle of fucking nowhere with fucking keys to a fucking car that isn’t fucking there. And I really didn’t care to fucking walk down a fucking highway and across a fucking runway to get back here to have you smile at my fucking face. I want a fucking car right fucking now.
Agent: May I see your rental agreement?
Neal: I threw it away.
Agent: Oh, boy.
Neal: “Oh, boy” what?
Agent: You’re fucked.

Although I understand all the pain Neal has to go through, this is an example of how anger ruins reasonable behavior. It also makes you act like an idiot in front of people, which is not really a good thing to do. 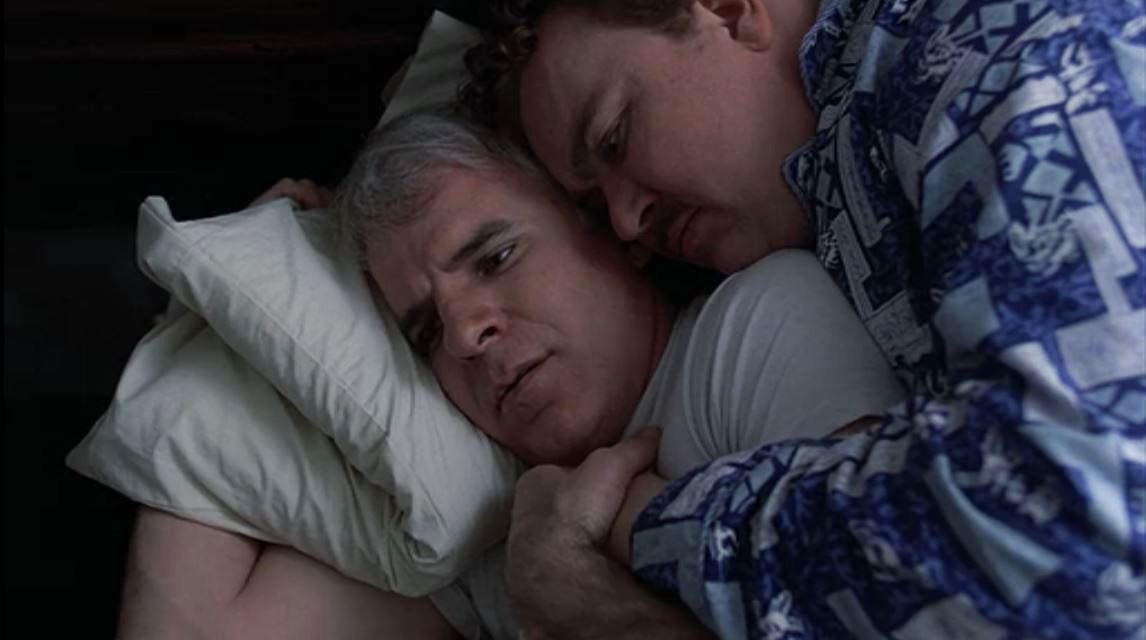 On the other hand, while Del can’t stop talking about everything and sometimes has a lack of consideration (such as placing his belongings all over the bathroom or driving carelessly), he tries to think positively in every situation. For example, when Neal and Del realize that their money is stolen, Del uses a sales trick selling his shower curtain rings to raise the money and use it as fare for them as well as reimbursing Neal, who paid the taxi fares and hotel fees. Although Del is comic relief, he’s not the usual annoying movie character that I always hate. Instead, he comes off as the well-rounded guy who can be serious. For instance, when they stay in the motel together, Neal can’t stand Del’s behavior and decides to leave the room, then Del says this interesting line:

“You wanna hurt me? Go right ahead if it makes you feel any better. I’m an easy target. Yeah, you’re right. I talk too much. I also listen too much. I could be a cold-hearted cynic like you, but I don’t like to hurt people’s feelings. Well, you think what you want about me. I’m not changing. I like me. My wife likes me. My customers like me. ‘Cause I’m the real article. What you see is what you get. 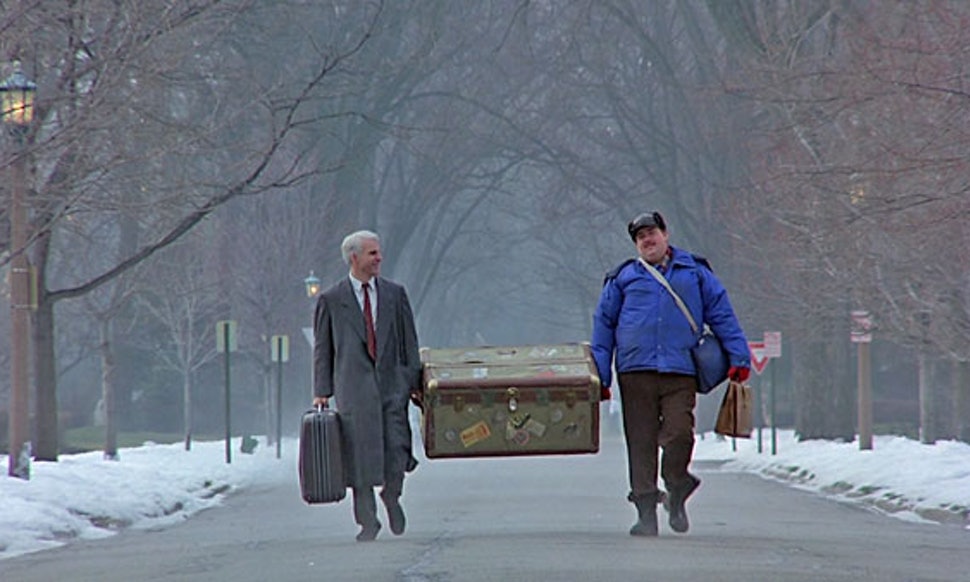 In the finale, he reveals an interesting background that probably shaped him to become who he is. It can make you cry since it’s quite touching and what Neal does for him afterwards is as well.

Planes, Trains and Automobiles made me realize how important it is for U.S. citizens to return home and see their families on holidays. It also taught me about temper control and what friendship means, while giving us hilarious and impressive movie moments. This is John Hughes at his best. Highly recommended to watch with friends and family!