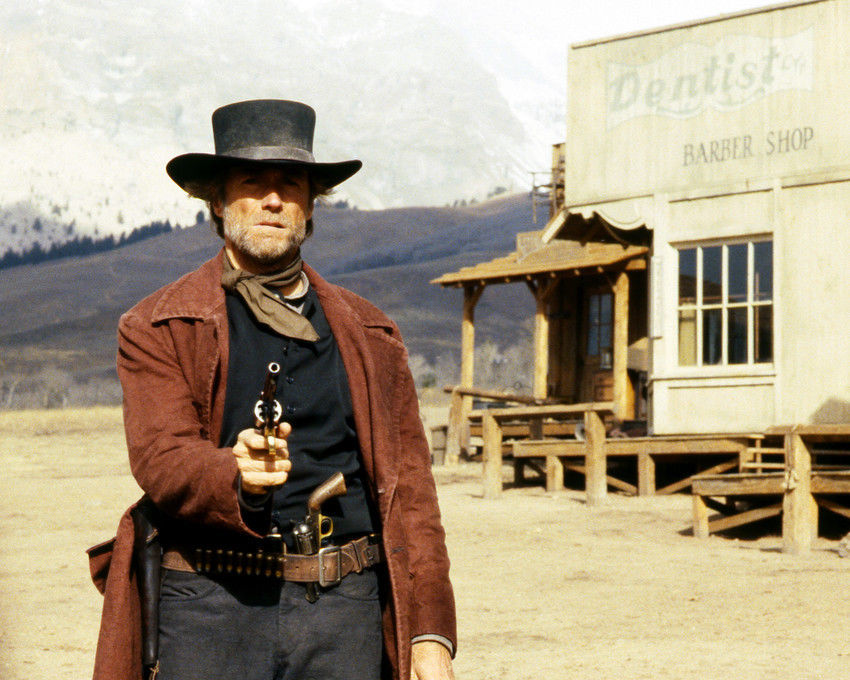 Slated by critics, loved by his fans, this over-cooked, over-ambitious, over-everything western, Pale Rider (1984), Clint Eastwood’s third as a director, offers both the best and worst of its star and maker.

The story told here, is one of the oldest (and most prolific) in the history of the western movie, that of the mysterious stranger coming to the aid of poor defenceless people threatened by a local tyrant. Nearly all elements of Shane (1953), the most famous western cast in this mould, are copied, but usually with a minor twist. Farmers have become gold-prospectors, a boy has become a flourishing girl, the Wyoming Frontier has become the California Gold Rush etc. Eastwood himself is the stranger whose arrival is accompanied by the teenage girl reading in the Bible about the horseman of the Apocalypse riding a pale horse, named Death, and hell followed him. He soon comes to the aid of prospector Hull Barret (Michael Moriarty), who is beaten up in town by some of the men of LaHood (Richard Dysart), who wants to lay his hand on the claims held by the prospectors, if necessary by brute force. Hull lives with a widow (Carrie Snoddgrass) and her blossoming daughter (Sydney Penny), and both the woman and the daughter are attracted to the mysterious stranger, who is addressed as “Preacher”, because he wears a white clerical collar. The preacher pulls the community of prospectors together and inspires them to fight for their rights. An alarmed LaHood first offers the prospectors a good price for their claims, but when they decide to stay, he contracts a group of hired guns, assembled by a man called Stockburn (John Russel). Stockburn and his man kill one prospector, who has found gold and had come to town to provoke LaHood, but then they have to face the Preacher … 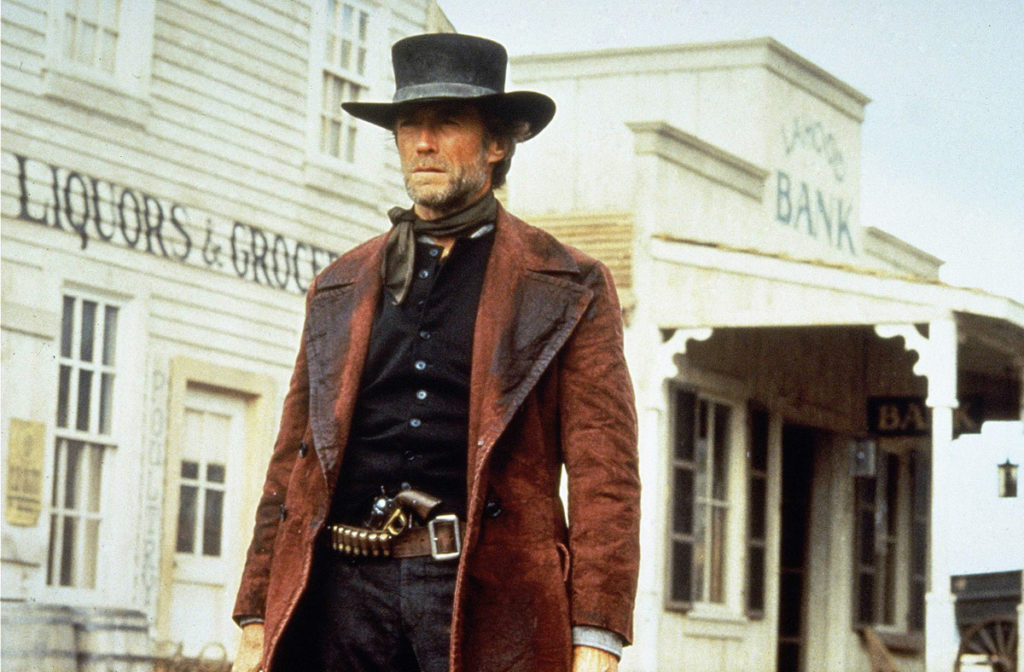 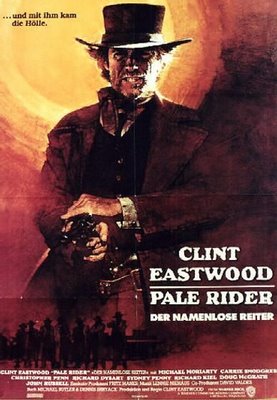 Pale Rider is also reminiscent of Eastwood’s first western as a director, High Plains Drifter. The main difference however, is the identity of the stranger and – even more so – the place he’s coming from. We never knew who or what the drifter from the earlier film was, but he seemed to come out of hell. Although the rider on his pale horse is linked to the Apocalyptic rider called Death, he seems more a messenger from heaven. There has been a lot of confusion about some of Eastwood’s utterances, suggesting that the title character is a ghost, a dead man who has risen from the grave. There seems to be some evidence for this in the movie, when six scars from bullet wounds are visible on his back. So many wounds in such a vital area of the body must have been mortal. The same amount of wounds, in the same pattern, will be inflicted on Stockburn, the leader of the hired killers, who apparently was the man who killed the Preacher in his former life. Like many readers will know, the same suggestions about a dead man risen from the grave, were made in relation to High Plains Drifter. It is sometimes said both films were influenced by an Italian western, The Stranger’s Gundown, in which an identical hero, a man with seemingly supernatural powers, avenged the massacre of a regiment of Confederate soldiers during the Civil War.

But maybe we’re supposed to explain all these allusions and references in a more allegorical way. The similar pattern of wounds give the film a distinctive circular character, symbolising the eternal alternation of life and death, also symbolized by some other story elements. Eastwood’s Apocalyptic Rider brings death and destruction, but only to facilitate the resurrection of life, impersonated by the young flourishing girl, who experiences the blossoming of her sexual needs in the presence of the Preacher. With Eastwood being both an avenger and a priest/gunslinger, a reference is made to his past in spaghetti westerns, famous for their highly anti-clerical symbolism, and it’s tempting to suggest that the unmistakable hints at the fact that the Preacher met Stockburn in the past, reveal something about the Preacher’s own identity. Was he a hired killer too, in the past, or in a previous life? Note also that Stockburn is referred to as a ‘Marshall’, which makes his actions no less than legal butchery. Eastwood seems concerned here with the same ideas and worries – the acceptance of violence exercised in name of the law, as well his own ‘violent past’ in movie history – that would lead to his anti-western Unforgiven.

Well-crafted and beautifully shot (by Bruce Surtees), the film can’t live up completely to its expectations. The mythical and biblical references come off as heavy-handed and Eastwood’s direction looks a little overwrought in some scenes (especially those with Penny), and then again a bit pedestrian in others. Some scenes are far too drawn-out, slowing an already slow-moving film further down. Other scenes, notably those with Kiel and Penn, feel more or less redundant, although Penn, then still rather unknown, turns in a good performance. But where Eastwood the director fails, it’s Eastwood the actor who saves the day. It’s hard to imagine any other actor who could breathe life in such an enigmatic character as the Preacher. Let’s be honest: the guy is as believable as some of those superheroes who can fly. But Clint’s strong screen presence makes all the difference: seeing is believing the Pale Rider. And as a director Eastwood redeems himself with the grand finale, a beautifully staged, truly engrossing shoot-out (that is, by the way, closer to High Noon than to Shane!).

This review was first published at FistfulofPasta.com, which is currently being archived at The Spaghetti Western Database.