In 1975, a film was released into theaters that changed the world of cinema and the filmmaking business forever. It also made going to the beach a very scary idea. The film was helmed by a young maverick director named Steven Spielberg. After directing his first theatrical film: The Sugarland Express (1974) Spielberg was hired on by Hollywood producers David A. Brown and Richard Zanuck to do the strangely titled film called Jaws which he realized was something similar to his 1971 Made for TV movie Duel in which a mysterious trucker preys on an average everyman played by Dennis Weaver. The JAWS script had been rewritten several times by different people including the author of the book Peter Benchley, screenwriter Carl Gottlieb, and even Spielberg himself. The story was simple enough: a killer shark preys on a small New England town and its vacationers, so the Chief of police Martin Brody (Roy Scheider) his oceanographer friend Matt Hooper (Richard Dreyfuss) and a crusty old seaman named Quint (Robert Shaw) take to the sea to kill the deadly creature. The script needed to be worked on and fleshed out more, but that was the easy part.

Jaws may have started out as a simple straight forward adventure in film storytelling, but while shooting the movie, everything began to go wrong. Jaws was essentially Spielberg’s own Apocalypse Now (1979). On that film, Francis Ford Coppola pushed the boundaries of filmmaking and his own sanity battling with studios, the actors and the entire atmosphere he was working under. With Jaws, Spielberg got into something where he had no idea about the hundreds of things that would go bust on the set. Instead of filming on a large indoor set or at a studio, Spielberg chose to use the real ocean off of Martha’s Vineyard, MA. Not only was Spielberg shooting on location, but he also planned on using a hydraulically controlled shark built by his special FX team. What they didn’t know at the time was that the salty, rough waters would eat away at the fake shark making it nearly impossible to shoot the scenes they needed to get in the can.

Since the shark known as “Bruce” (an in-joke reference to Spielberg’s lawyer) was constantly under repair while the crew was supposed to be shooting scenes featuring it, Spielberg relied on his extensive film knowledge and used his talents to make up for the absent shark. What could’ve been a complete disaster was saved by using Hitchcockian techniques to create Point of View shots that were placed throughout the film to create a feeling of the audience seeing what both the Shark and the people floating in the water were seeing.

The films post opening credits sequence is one of the most effective psychological shock pieces ever shot on film. We see a beach party crowd at night singing songs and a pretty young girl played by Susan Backlinie. A young guy stares at her from across the campfire, we can see he digs her. Teasingly, she gets up and runs off across the sandy dunes to the ocean. She strips her clothes off and dives into the ocean. The drunk college boy chases after her, but he falls down and passes out on the shore. As the girl swims in the water, we see a shot from below of her legs paddling slowly. As she floats  we realize she’s not alone. Suddenly, a tug pulls her underwater, another tug and she begins to scream. As the unseen creature beneath the water thrashes her violently back and forth, it becomes an orgasm of death as she flails and yells for her life. She gets thrust towards a buoy and grabs on, but then she gets yanked under again and with one last gurgle, she dissapears, a victim of the leviathan living under the dark sea.

We then meet Amity Island’s police chief, Martin Brody and his wife played by Lorraine Gary and their two children. Chief Brody is a transplanted New Yorker, who happens to hate the water. When Chief Brody finds out about the missing girl, he quickly begins investigating what happened the night before. After questioning the young college student, Brody finds remains of the girl (covered in sand crabs). He knows this isn’t your standard death, it’s a shark. When word gets out that there is a killer shark off of Amity, the town begins to go into a frenzy. Pretty soon, the townspeople decide to go after the shark in a kind of floating lynch mob. They do find a large shark and kill it, thinking they’ve done the job, but after Brody and a young wealthy oceanographer named Matt Hooper investigate the shark (by cutting open its belly), they find no human remains inside. They know the killer shark is still on the prowl and decide to hire on a local seaman named Quint to help them track the shark down and kill it. This is where the film really picks up and becomes an adventure film on the water.

The three men start out as completely conflicted personalities: the working class New York policeman, the hotshot young know it all and the ragged old sea veteran, but by the end of the film, they have all become friends or at least understanding of each others backgrounds. One of the films best sequences comes when Quint, Hooper and Brody are getting drunk on the boat (called the ORCA) and they each show one another their bodily scars. Quint explains that a patch on his arm was once a tattoo sign for the U.S.S. Indianapolis. This was a ship that went down in World War II. Quint goes on to tell about his first encounters with sharks and the horrific things they did to his shipmates. The dialogue was rewritten a few times and Spielberg’s pal Director/Screenwriter John Milius (Conan The Barbarian) rewrote the scene and gave it that trademark Milius touch which was ultimately used in the final cut:

“…Sometimes that shark looks at ya, right into your eyes, and the thing is about a shark is, hes got lifeless eyes, black eyes, like a dolls eyes. When he comes at ya, he doesnt seem to be livin’… til he bites ya, and then those black eyes turn over white and then… ah, ya hear that terrible high pitched screamin. The ocean turns red and despite all your poundin and hollerin those sharks come in and they… rip ya to pieces….” – Quint

The mix of action, terror and adventure made the film an attraction for all ages and Jaws went on to become one of the highest grossing films ever released. It also started what people now know as the the “summertime blockbuster season”. It was a pop culture phenomenon and everyone who saw the film (including myself) was affected by it. I still remember going swimming on Cape Cod (very close to where the film was shot) and being scared to death at what was lurking beneath me. I even used to scare myself swimming in my pool at night, bracing myself for that tug from the invisible shark beneath me. JAWS is a suspenseful journey that even 30 years later holds up under repeated viewings (I’ve personally seen the film at least 100 times).

“When I first hear the word Jaws, I just think of a period in my life when I was much younger than I am right now, and I think because I was younger I was more courageous…or I was more stupid. I’m not sure which. So when I think of Jaws, I think about courage and stupidity. And I think of both of those things existing under water. – Steven Spielberg 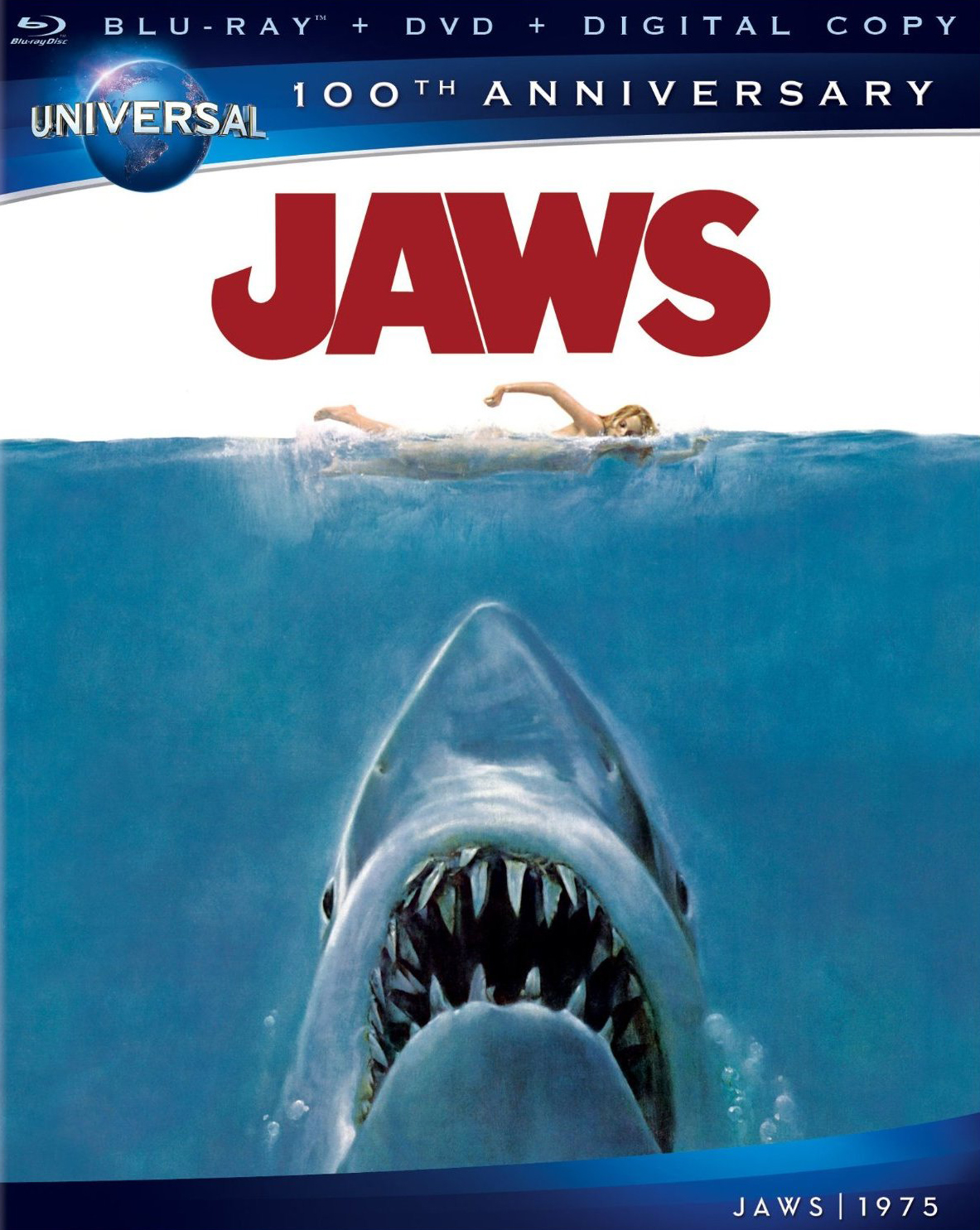