I am the Law 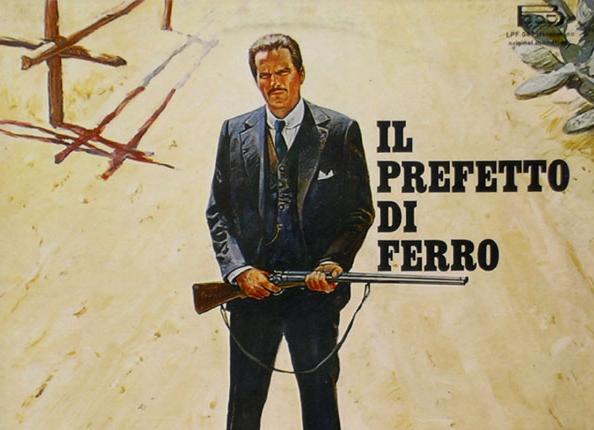 I am the Law (Il prefetto di ferro) is an Italian crime drama available on a Wild East double feature DVD along with Mafia (aka The Day of the Owl, click here to read my companion review at the GCDb). It is starring Giuliano Gemma (A Pistol for Ringo) and in a minor role the director Pasquale Squitieri‘s then-wife Claudia Cardinale (Once Upon a Time in the West).

In pre-war Italy, the Mussolini government sends reputable Commissioner Mori (Gemma) to the crime-ridden Sicilian city of Palermo, where the Mafia has grown into a state-within-a-state. The respected crime-buster will have his work cut out for him. The people are intimidated, the bureaucracies are compromised, rival bandits are making the surrounding country unsafe and a family is brutally slaughtered the day of his arrival. A message to the government man: don’t mess with the Mafia. Equipped with special legal powers, he starts out busting small fish, and then going after the bandits first. As him and his deputy uncover a real estate scheme that reaches the upper echelons of the local polity, he goes after them with a bang. His success is cleverly exploited by the rising fascist movement, who eventually get entangled in the mafiesque structures as well… 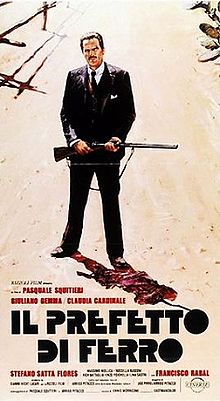 I was very pleasantly entertained by a previous Pasquale Squitieri movie I saw a few months ago, 1974’s I Guappi (aka Blood Brothers), which takes place in 19th century Italy and is also starring Claudia Cardinale, plus Fabio Testi and Franco Nero. Squitieri showed off his craftsmanship in telling a compelling crime story and tough socio-political critique at the same time. In I am the Law (1977), he jumps a few decades to 1925 and paints a bleak picture of the impoverished and crime-ridden pre-war society that the fascist movement had cleverly exploited for its rise to power, with which Mussolini then led Italy into Hitler’s cruel war. Whereas Bernardo Bertollucci‘s dramatic 1900 (the US BluRay has some transfer issues, the 2016 UK BluRay might be better) however tells history and social developments on an epic scale, this movie is a tough crime drama without grand ambitions, and that’s a good thing.

Giuliano Gemma excels as the committed Eliott Ness type Mafia-fighter who enters the city with a clear idea of how to root out the organized crime structures and dependencies. His character, the “Iron Prefect” Cesare Mori, is a real life character and quite a tragic figure. His success in beating the Mafia was mostly attributed as a political success for the fascists, whom he had joined only half heartedly shortly earlier. After his Palermo gig, he went on to be a Senator for a few years, but was marginalized when the country took a radical turn towards war. He retired and was forgotten. As the above linked article notes, with the Allied occupation of Sicily, the Mafia was allowed to come back full swing. All his work was undone, first by the statesman who gave him carte blanche, then by the liberators who brought back democracy. 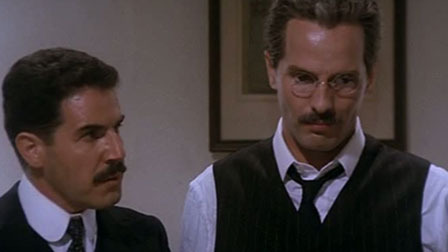 I cannot but compare I am the Law to the vastly superior I Guappi, even though they are two very different films. Where the story about Mori fails, is where the Testi-Nero drama succeeds: it boasts an very much more detailed story and script and results in a far more elaborate court room drama than the story of the Iron Prefect could ever develop into. Mori goes along fast, and so does the script, resulting in lots of jumps, holes and imbalance. It is still an outstanding period piece, a great crime drama with historical importance and quite entertaining, but it’s quite flawed. The Wild East disc touts this as a Claudia Cardinale film, but she’s barely a side character. I would assume that a lot of her story ended up on the cutting room floor, but the story is just too convoluted, and it doesn’t have the epic breadth of 1900 neither, a comparable movie of the time, which had the time and script to take care of a myriad of characters to varying degrees of depth. 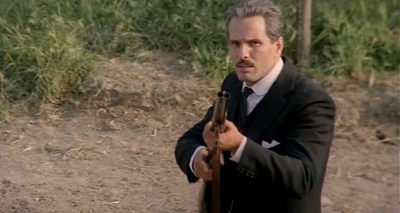 The DVD offers two films on one disc, so the compression is rather high. It is an okay transfer that is alright in daylight scenes but gets considerably worse in dark scenes, where the lack of contrast and horrible black levels show. This is a satisfactory presentation but not by a long shot the kind of restored HD-remastering that I hope this movie will receive at some near point in the future. In a separate review I’m looking at Mafia, which was also co-written by Ugo Pirro. 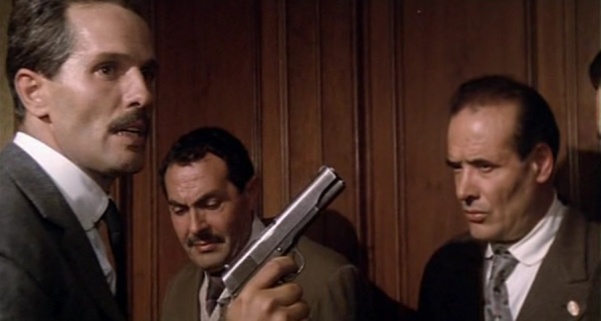 All in all, “The Iron Prefect” is an outstanding period piece that should make for exciting viewing if you’re into Italian cinema. It’s not at all an exploitation flick, there’s little in the way of action, it’s a crime drama with a very strong biographical bent, that should add well to your foray into exploring Italy’s interwar period through motion pictures. The sober but very fitting score by grandmaster Ennio Morricone should be considered the icing on the cake. Highly recommended. 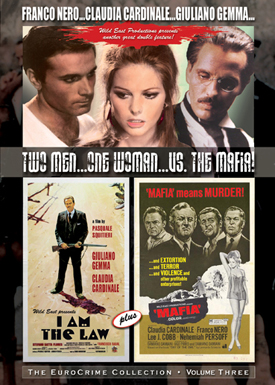 Click here to read my review of Mafia at the GCDb