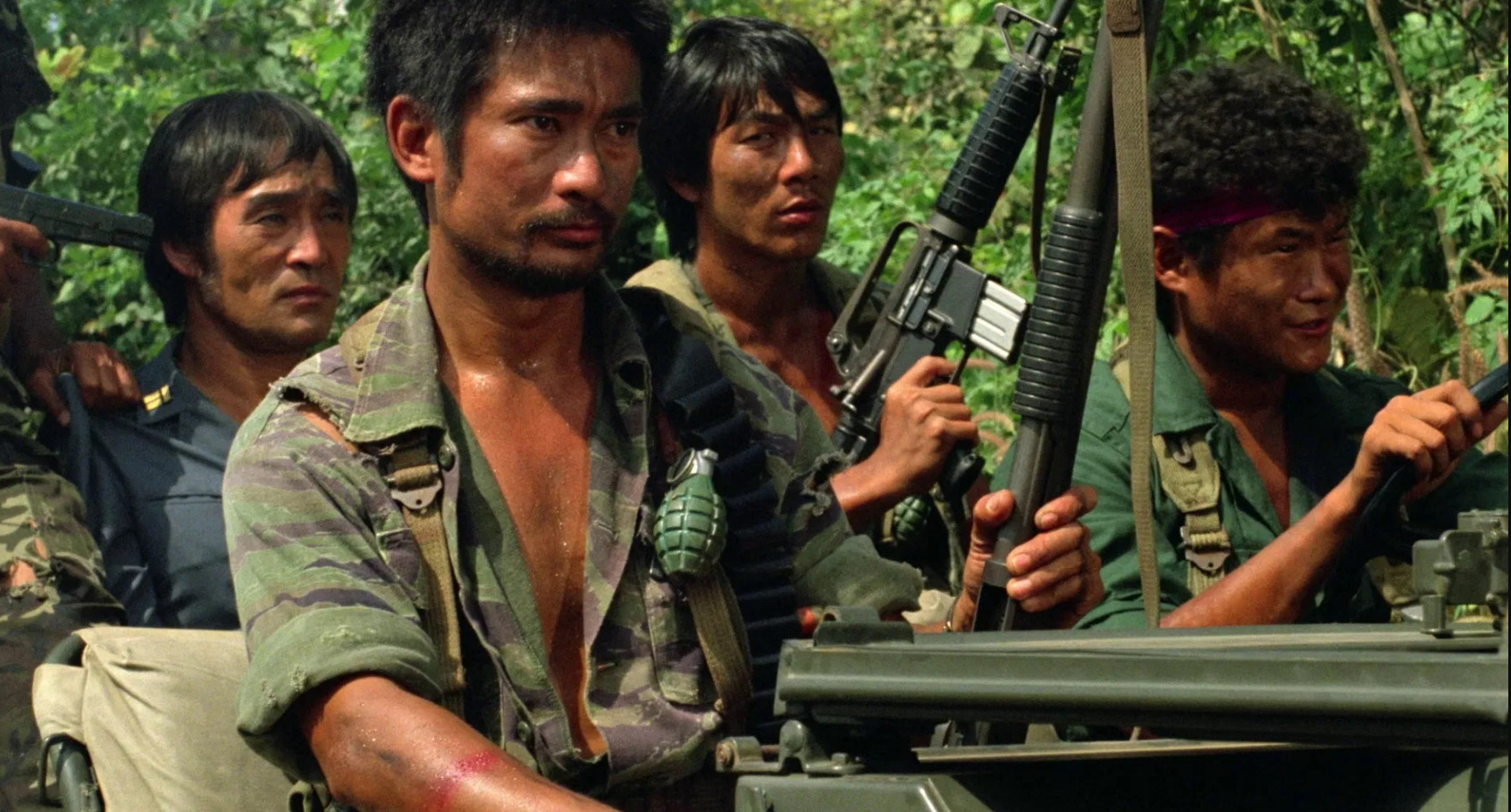 Heroes Shed No Tears (Ying xiong wu lei) is a 1986 actioner by John Woo, and probably among his least well known films. Woo’s movies have had a hard time ever since the advent of digital technology: because original materials in Hong Kong of many of his movies had been lost (in fires and due to lacklustre treatment), it has always been hard to restore properly conserved negative materials. What might have been fine for VHS and to some extent DVD, will no longer work in high definition. Some efforts a few years ago to restore many Hong Kong action operas have resulted in some decent releases in Hong Kong by Kam & Ronson of many of his beloved flicks. 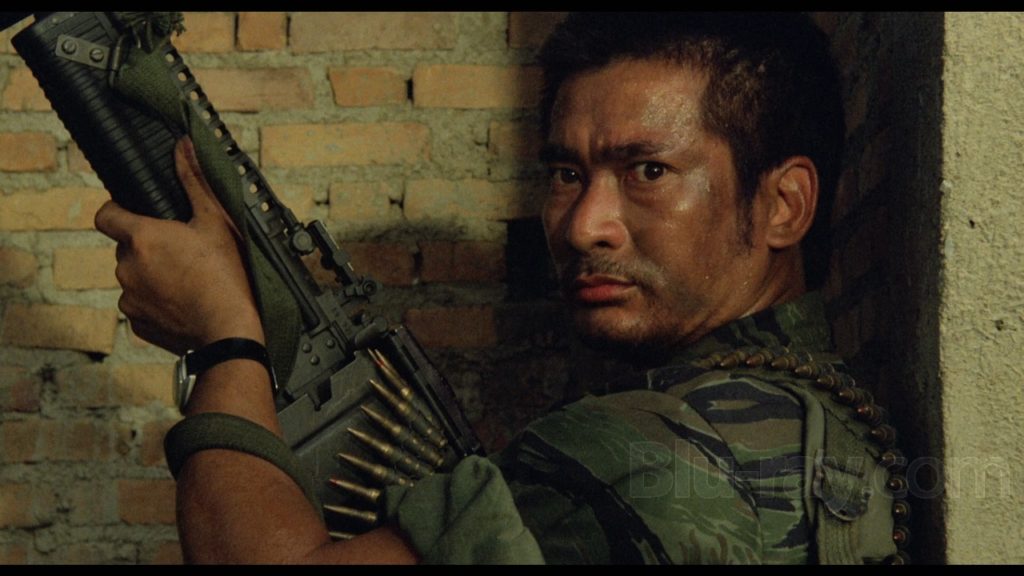 Heroes Shed No Tears was made in Thailand in 1983, even before A Better Tomorrow (Bluray at PlayAsia), but it only saw the light of cinema screens after that film’s success and was released subsequently. Woo is said to have been unhappy with the film’s mix of action, war movie and melodrama, and because the studio had the final say, he also had no control over delivering a fine-tuned work. Apparently bits of nudity were the studio’s choices (there is quite a bit of drug use and nudity in there that were not filmed by Woo himself). In Germany, where I grew up, the movie fell victim to enormous censorship, and was still banned then, a fate that befell most of Woos movies. 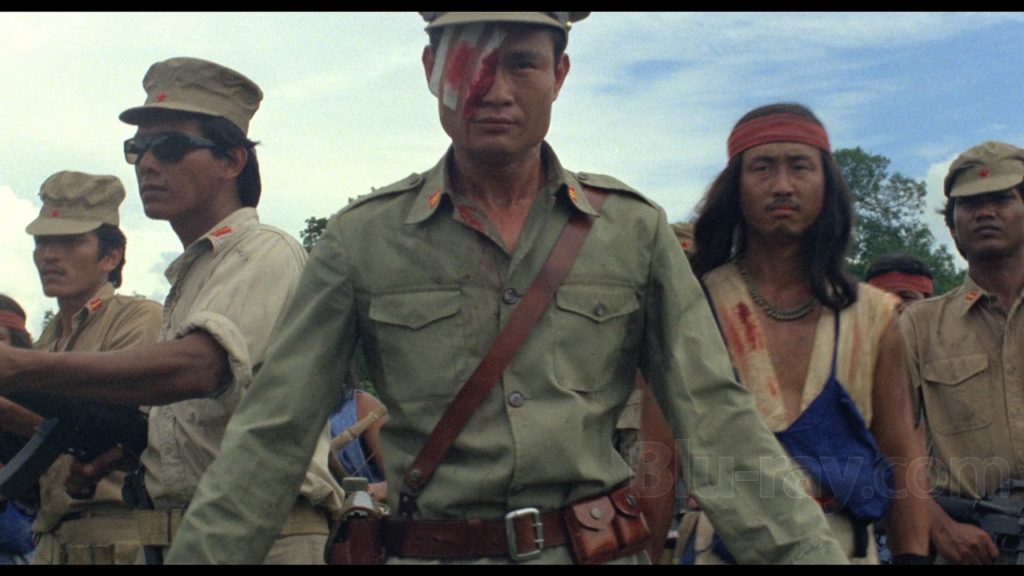 What is the movie about then? A group of Chinese mercenaries led by Chan Chung (Eddy Ko) are sent into the Golden Triangle (Laos, Cambodia, Thailand) to end the reign of a powerful militia boss and drug lord called General Samton. They take out his operation and take him hostage, but his thugs are now hunting the remaining four mercs. They also get bogged down, first by rescuing Chung’s family, and then a French tourist (Cécile Le Bailly) from a sadistic Vietnamese border guard (Lam Ching-ying), who goes on to employ a native tribe to track the mercs. So they have to fight their way through the border land, the general, two women and a kid in tow. Ambushes, enemy soldiers and other dangers lay on their way to Thailand through deadly Laos where they pick up Louis (Philippe Loffredo), Chung’s old war buddy, who sits on a lot of guns… and girls. 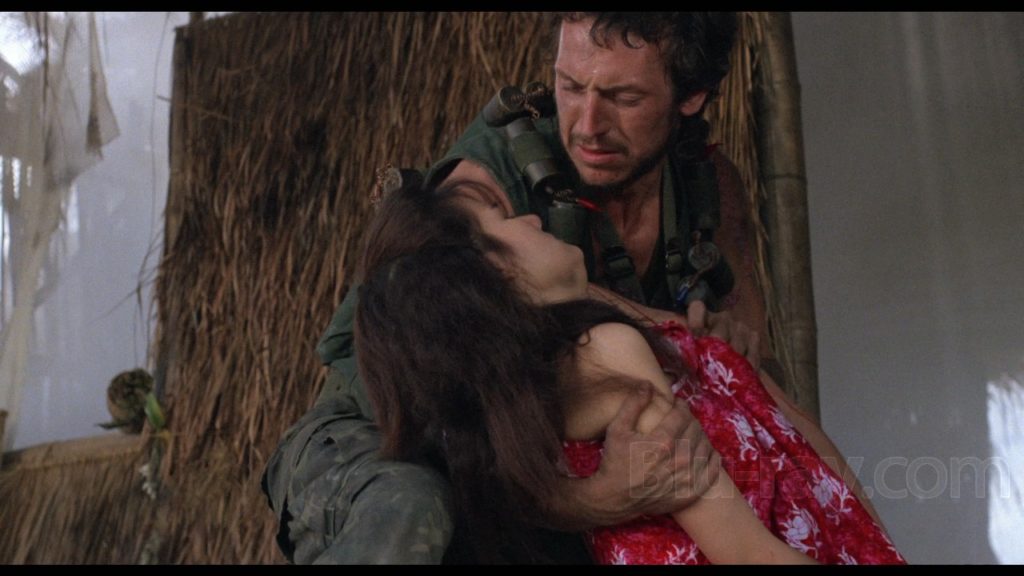 It would take Woo first six (until Bullet in the Head) and then another 12 years to revisit the war movie genre (with 2002’s Windtalkers starring Nicolas Cage and Adam Beach, where he applied many aspects we can already observe here). Heroes Shed No Tears however has a lousy script, wooden acting, gnarly gore effects and tons of stereotypes, but it is a fun 80s action flick that fans need to have seen (in order to believe). Ko does his best to unite overly melodramatic with hilariously stoic moments, which the entire cast has to muster with almost schizophrenic skill. It has to be admired. The film is of course totally over the top, but it always takes itself very seriously. A better producer would have watched out for this kind of imbalance, but alas director and studio were horribly disagreeing on what kind of picture this should be. So you end up with a bunch of low budget, high adrenaline, action scenes that show off early Woo prowess powered by the Thai crew (employing all kinds of shenanigans you’d be locked up for today, including shooting live rounds at people). But you also end up with quiet scenes of grief, reflection and friendship, which are either totally overdone, wooden or melodramatic. One scene, which apparently the studio inserted later on, seems to be a particularly nonsensical copy of The Deer Hunter‘s Russian roulette scene, in another two mercs argue over steak. The list goes on.

Heroes Shed No Tears must be seen to be believed. It sits eerily at the bottom pile of Woo’s filmography, but should still be required viewing for any student of the Hong Kong era. Let’s just say it’s a bad movie that could’ve been so much more, but now it’s just the oddity which -finally- we can enjoy in HD to analyse just how odd it is. But hey, it’s also a lot of fun. 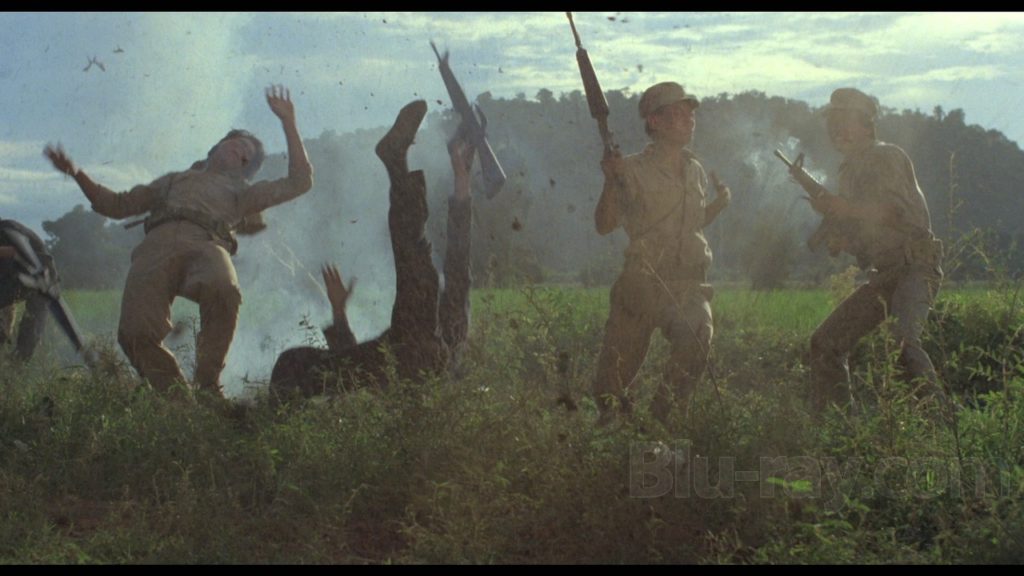 Film Movement released this BluRay and DVD in the United States back in June of 2019, and they have done an amazing job. They have shown a knack for long-overdue releases, just like earlier when they brought The Great Silence to HD as well. The disc is unfortunately Region A only, but fear not, there is already a UK release in the works, that should feature some additional goodies not present on this one. John Woo completists might have to get both of them. Running at 88:40 Minutes, it presents the movie in its uncut theatrical version. The picture looks pristine, sharp, colorful and contrast-rich without too much digital meddling. The flick hasn’t looked this good since its premiere I presume. The situation is a bit different in the audio department. While the disc offers Cantonese, Mandarin and English tracks each in a DTS-HD MA 5.1 and a Dolby Digital 5.1 variety (English subtitles optional), these are all the upmix. The original monaural track is unfortunately not included, another fate that has befallen a lot of Hong Kong releases on home video. There are not that many extras on the disc, but there is an interesting 20 Minute Interview with Eddy Ko, where he also voices his disappointment with the movie, as well as a few trailers (the film’s original trailer, as well as trailers for King Hu‘s “The Fate of Lee Khan”, “The Great Silence” and the Takashi Kitano movie “Violent Cop”). There’s a booklet with a great essay by Grady Hendrix.

Scroll further down to the end of the page for a few details on the upcoming UK release of the movie! 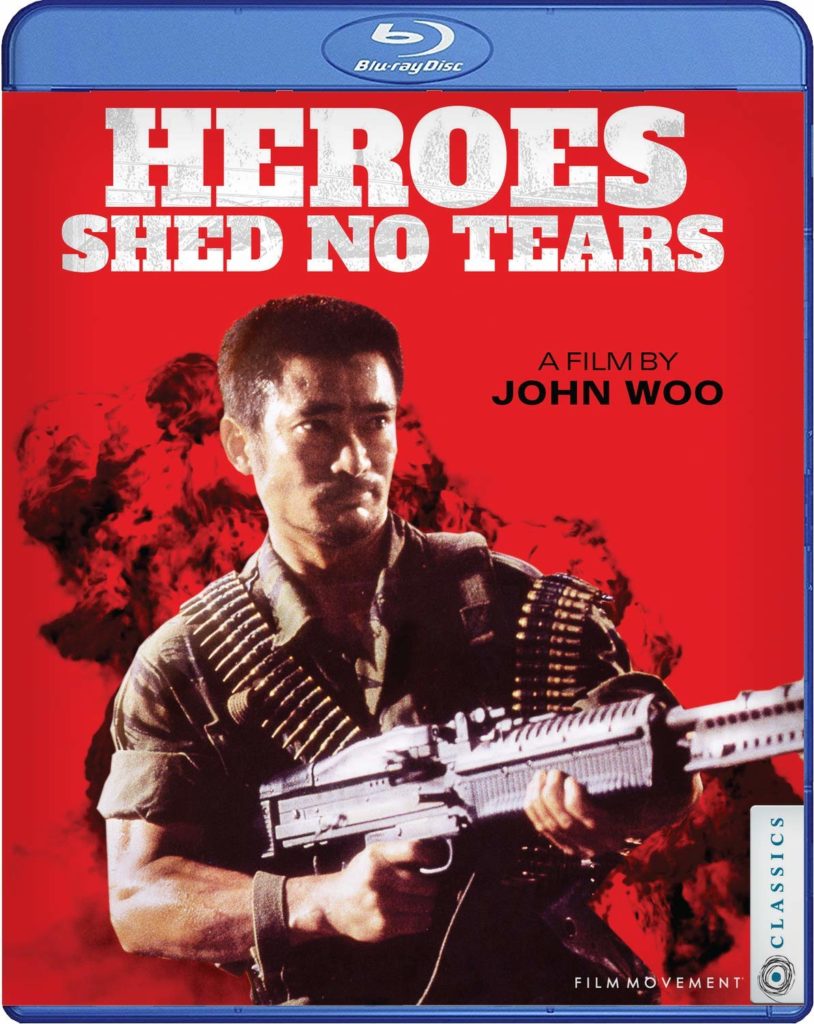 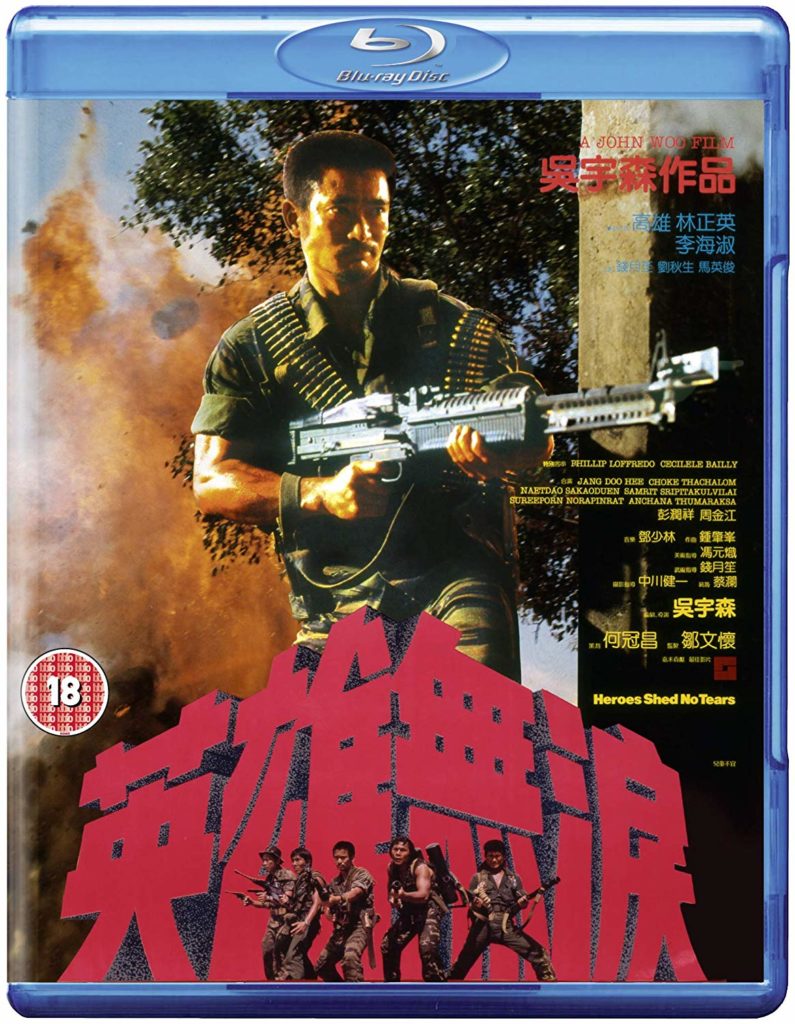 The UK BluRay will be released by 88 Films on the 24th of February. Features include the 85min international cut (it might just mean the nudity missing) with the classic English dub, an audio commentary by Brandon Bentley, “a tale of two cuts” feature examining the differences between the film we all know and John Woo’s original workprint (14min), an interview with Eddy Ko, various trailers and all that in a limited edition slipcase with a reversible sleeve in alternative artwork and a booklet with liner notes by James Oliver. In stark contrast to the US disc I am reviewing here, the UK disc will include a pre-upmix original mono soundtrack (Cantonese) but no Mandarin tracks. It will be Region B.

Screenshots via BluRay.com (scaled down and compressed)