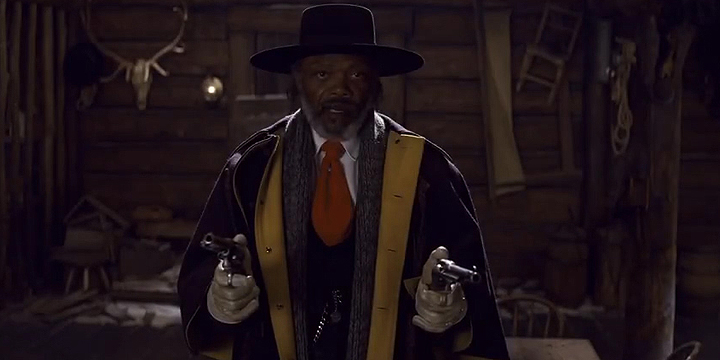 In a white wintry abyss, the sounds of Ennio Morricone‘s ominous score plays as a stagecoach slowly comes into view. Sitting square in the path of the horse drawn buggy upon a heap of dead bodies is Major Marquis Warren (Samuel L. Jackson) an ex-Union officer turned bounty hunter. He has been left stranded in the cold due to his horse dying on the trail. When he inquires to the driver O.B. (James Parks) about the passengers within he is informed that he must make a deal if he wants a ride. It has been rented by a bullish bounty hunter John Ruth (Kurt Russell) aka “The Hangman” who gets his moniker from the fact he never kills his bounties, he always takes them in to hang. Accompanying Ruth is his feral fox of a prisoner, Daisy Domergue (Jennifer Jason Leigh). With a racial insult from her mouth and a snot rocket out her nose we find out right away this creature is not quite right in the head. Ruth makes no qualms about his feelings for Ms. Daisy as he brutally clobbers her several times in front of Warren, who is equally repulsed and intrigued. It turns out Ruth and Warren are acquaintances, as roving bounty hunters often are. Still, Ruth doesn’t trust anyone due to his aim of collecting $10,000 for Domergue’s hide. Warren assures him that his own bounty cash will be enough and Ruth abides his presence.

As they proceed forth with a blizzard cold on their tail, Warren has a special keepsake which Ruth marvels at. A prized letter from President Abraham Lincoln himself. Ruth asks if he may see it and Warren lets him, but when Daisy spits on it, Warren clocks her in the face knocking her and Ruth out the coach into the icy cold snow. Not long after, O.B. lets them know another person is out in the storm up ahead. This turns out to be Chris Mannix (Walton Goggins) an ex-Confederate soldier who explains to his fellow travelers he is the new sheriff of Red Rock and is stuck. Neither Ruth nor Warren trust this hillbilly, charming as he is, but he soon talks his way into a ride as well. It’s here that we learn more about Major Warren’s sordid past in the war thanks to Mannix. After expressing his points of view on the subject, Chris is dismissed by Ruth and Warren as a simpleminded renegade redneck. Still, we can tell he retains a deep respect for the defeated Confederate cause and for his father, the leader of a rebel outfit called Mannix’s Marauders.

When the stage finally gets to Minnie’s Haberdashery, a mountain pass stopover/refuge, they are greeted by Bob (Demian Bichir) a strange fur clad Mexican man who Warren (a previous client) doesn’t recognize and becomes immediately suspicious of. He finds out the owners, Minnie and Sweet Dave, are visiting Minnie’s mother somewhere on the north side of the mountain. Ruth and Domergue then encounter the inhabitants stuck inside. They are Oswaldo Mobray (Tim Roth) the affable, British hangman of Red Rock, Joe Gage (Michael Madsen) a husky, quiet cowboy on his way to visit his dear mother and General Sandy Smithers (Bruce Dern) a cranky old Confederate general who is in the area on family business.

An increasingly paranoid Ruth is convinced one or all of them are in cahoots with Domergue and begins his systematic interrogations. Meanwhile, good ol boy Chris Mannix recognizes Sandy “Don’t Give A Damn” Smithers and reminisces with him about his father Erskine, someone that Smithers didn’t know but respected. When Major Warren finds out he’s sharing space with his arch enemy Smithers, someone who clearly despises blacks, the climate of tension increases even further. To keep things as calm as possible while they’re stuck together, Oswaldo suggests they split the haberdashery into two areas, the Southern side, represented by Georgia (fireplace) and the Northern side which would be Philadelphia. (the bar). The patrons all choose their preferred spots and try to stay out of each others way, but the civilized atmosphere doesn’t last long. The cabin becomes a smoldering cauldron of post-Civil War distrust, confusion and revenge. Quentin Tarantino has covered similar confined territory before most notably in his debut hit Reservoir Dogs (another one room potboiler) and in Inglourious Basterds‘ suspenseful basement tavern sequence. Now if you’ve seen these films, you will know that neither end with the characters holding hands and singing kumbaya.

The film was shot in Ultra Panavision 70 by master cinematographer Robert Richardson. Since I only saw the DCP version I didn’t get to experience the full scope of that presentation. What I can say is that the visuals were still undeniably beautiful for the most part. Still, I’m not entirely convinced that shooting 70mm inside a cabin setting really increased anything other than the frame ratio. Right now I consider 70mm film not much more than a gimmick in the style of 3-D. You can talk yourself into believing it’s something amazing that adds to the movie but lets be realistic, The Hateful Eight is going to be seen for the majority of its shelf life on TV sets not massive screens. Unless the film itself is an epic story in space and action that requires such a giant format (see Lawrence of Arabia), using 70mm doesn’t seem to make a lot of sense.

Writer-Director Quentin Tarantino does a superb job letting you get to know his charismatic and quirky dregs of society but once the story enters into the classic Agatha Christie “whodunit” phase it quickly devolves into a rather tedious carnival of carnage. Heads pop like pinatas, limbs are lopped off, bodies get blasted apart and blood is belched forth, but instead of being some kind of thrilling catharsis it’s simply unaffecting and dull. As with every QT film, there are some interesting twists and turns along the way including a flashback that recalls a classic sequence in The Good, The Bad and The Ugly but with a twisted sexual slant.

The Hateful Eight has got all the ingredients of a classic Tarantino film, but it also doesn’t really improve on any of them or show us something we haven’t seen before. It is a well made movie with plenty of solid performances, wicked humor and gallons of gore, but it’s neither an epic nor a great Western as we know them. It sort of falls short in those specific areas, but the hate, the seething hate is definitely there in abundance.