One of the most important and iconic films in cinema history is Easy Rider. It was directed by veteran actor Dennis Hopper in 1969 and has since become a cult classic for generations of cineasts.

Wyatt aka Captain America (Peter Fonda) and his pal Billy (Dennis Hopper) travel to Mexico to buy some yayo (cocaine) from a cheap seller. They try the coke and they laugh at just how good it is. Wyatt and Billy’s plan is to sell the cocaine to finance a trip to Mardi Gras then retire with the rest. When they find a buyer, they meet him at an airport (probably LAX). The Connection (Phil Spector) is sort of an impish nerdy looking guy. Cap lets him sample the coke to see what he thinks and when The Connection nods in approval, Cap knows he’s just made the deal. 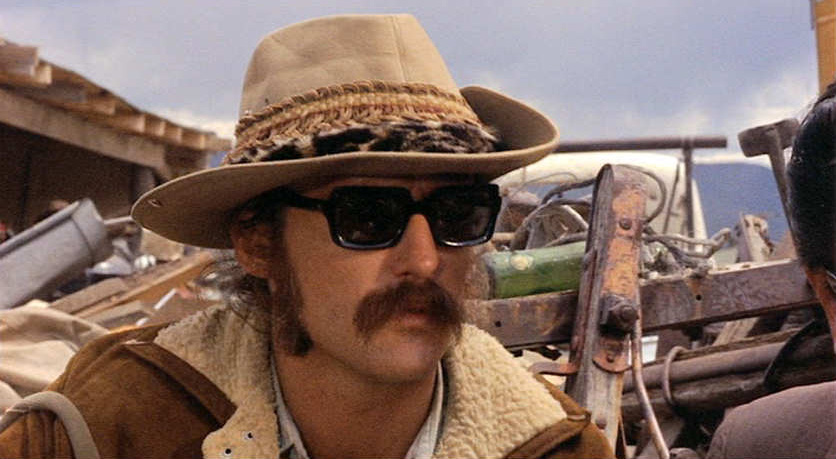 As the sounds of Steppenwolf’s “The Pusher” plays, we see Cap storing the money in a tube that will be hidden his gas tank (a precaution against thieves). What I love about this sequence is that the song “The Pusher” is actually about condemning drugs and drug dealers, it’s an ominous song. In a telling shot, we see Cap take off his watch and throw it on the ground. They aren’t gonna play by society’s rules anymore, this is about freedom and no schedule. Cap and Billy rev up their choppers and take off into the horizon. In the thrilling opening credits sequence, Steppenwolf’s iconic ode to freedom “Born To Be Wild” plays as Cap and Billy look supercool motoring along. It’s definitely one of my favorite opening credits sequences of all time. As the credits come to a close, Cap and Billy stop at a hotel that says “Vacancy” on the neon sign. When the owner hears the choppers outside he changes the sign to: NO Vacancy. Billy lets out a loud insult: “ASSHOLE!”, and the boys keep moving on. They find a place off the road to sleep for the night and chat for a little while and smoke some weed. 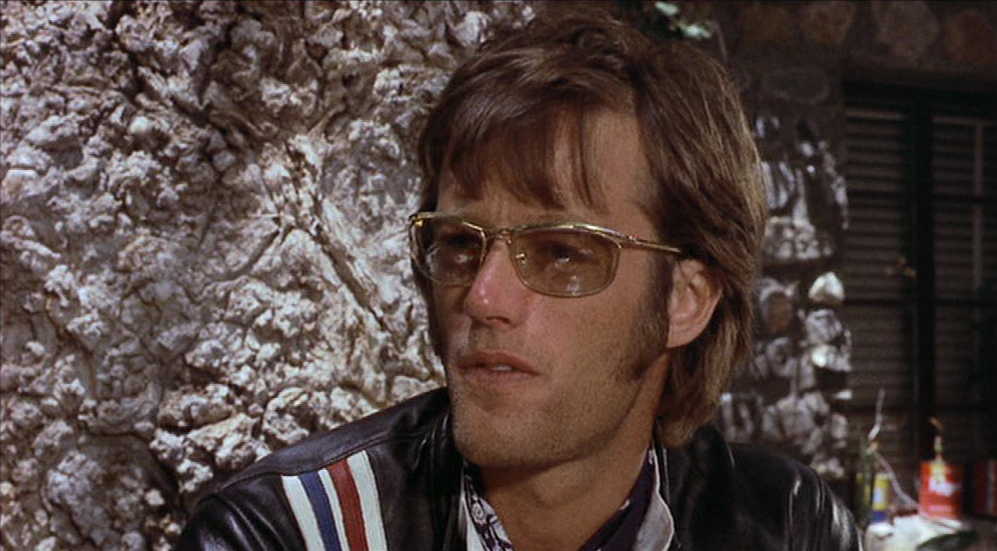 The next day, while on the road, Cap gets a flat. After they stop at a farmer’s ranch, we see Billy and Cap changing the tire on the bike, as the farmer puts new horseshoes on his horse. This signifies the Western aspect of the film. Cap and Billy are New/Old West outlaws making their way across the country on their bikes/horses. Cap and Billy stay for lunch at the farmer’s place and they have a nice meal with his family. They chat with the farmer and Cap compliments the old guy on how he lives his life: “in his own time”. 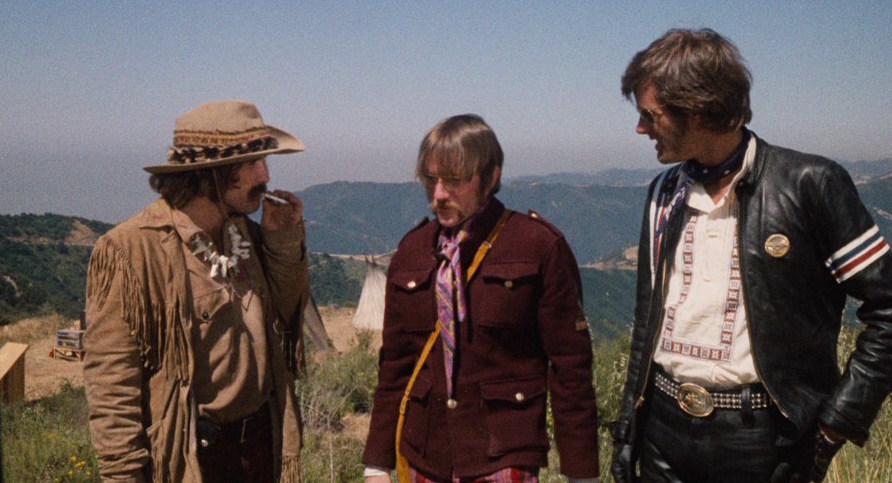 As they are driving along, they see a hitchhiker (Luke Askew) and pick him up. One thing that comes through in this film was the sense of trust and innocence of the times. Nowadays you wouldn’t dare pick up some scrubby looking hitchhiker, but these guys did it as second nature. They drive to get some gas and the Hitchhiker offers to put the gas in the tank. Billy suddenly flips out and gets afraid that he will find out about the money hidden inside Cap’s tank. Cap assures him it’s ok. This scene specifically shows the two changing social personas of the time. Cap being the laid back, mellow hippie and Billy being the slightly crazy loose cannon hippie. The Hitchhiker tells them he’ll pay for the gas and they set out on the road again. 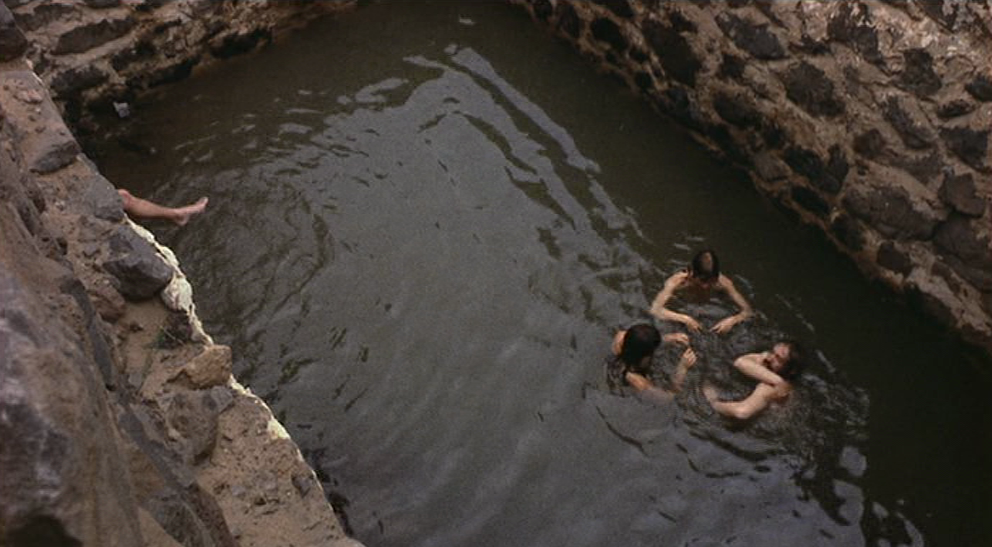 The Hitchhiker brings Cap and Billy to a Hippie Commune somewhere in the Southwest. The place is filled with city kids who have moved to try to start a new life. They are farming the land and trying to keep themselves going. Cap and Billy witness the small community and are impressed and curious at these strange people who are living their own way. They meet a song and dance troupe who are the commune’s entertainment. After meeting a couple girls at there, they ask Cap and Billy if they would take them to a water spring so they can bathe. They all goto the spring and have a great time, splashing in the water and letting it all hang out. Before they leave, the hitchhiker gives Cap a present: A big tab of acid. He tells Cap to drop it when the time is right. 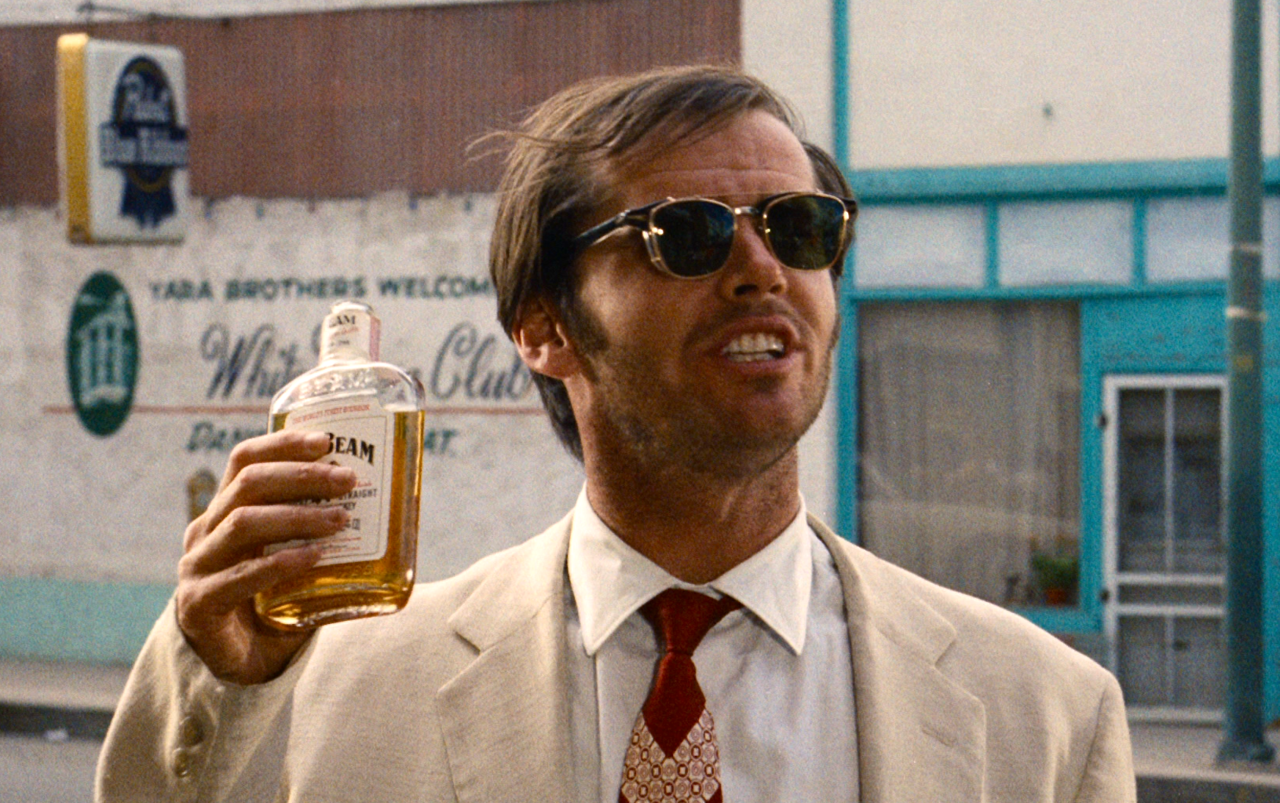 While riding through a small town that’s having a parade, Cap and Billy are arrested and thrown in jail for (what else?) parading without a license. It’s there they encounter a man in the cell named George Hanson (Jack Nicholson) who is a drunk…and also a lawyer. George and Billy don’t get along at first (I love their introduction), but soon they become friends and they start to get to know each other. George is a very likeable guy and Cap and Billy ask him if he would like to join them on their trip to Mardi Gras. In one of the most comedic and iconic scenes in the film we see George riding on the back of Caps bike with his old high school football helmet on. It’s a fun sequence as they all have a grand time driving along, making faces and doing tricks on their bikes. 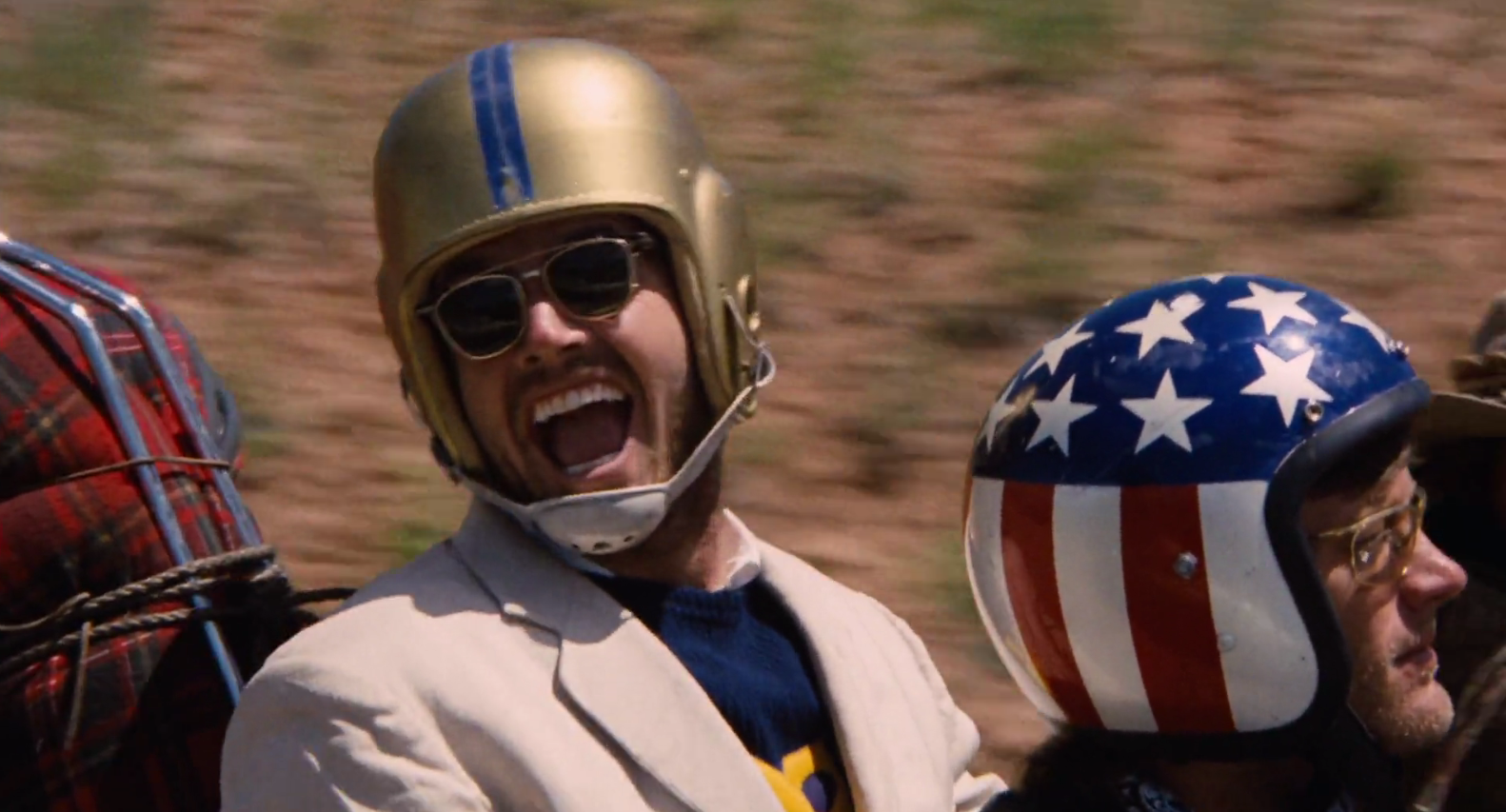 Cap, Billy and George decide to stop at a diner to get something to eat. Inside they are harrassed by some of the local redneck scrubs, including a cop. In another booth, they are being swooned at by some local girls. After the local rednecks make some threatening comments towards Cap, Billy and George, they decide to leave before things get ugly. The boys camp out for the night a few miles away and chat awhile (there’s some excellent dialogue here about freedom given by George). In the middle of the night, some men (probably the same rednecks from the diner) jump out of the woods and beat them with sticks and bats. Billy screams in anger as the men bash in George’s head, killing him instantly. Cap gets knocked out, but survives. It becomes a very sad scene as the two rebels realize their new friend George, who’s a lawyer and the most clean cut of the three is dead only because he was with them. 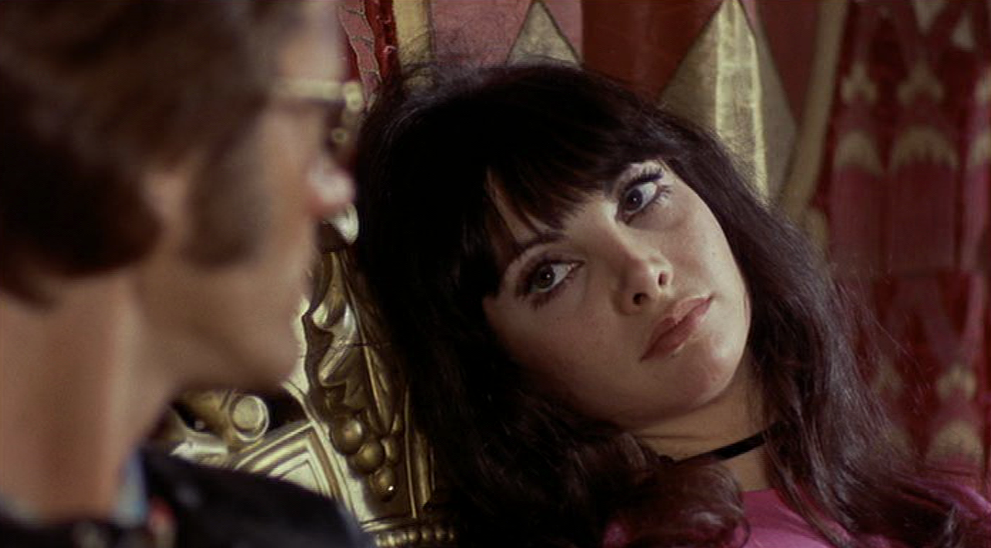 The two rebels finally arrive in New Orleans and decide to take out some of their cash and have a nice hearty meal and get sloshed on some wine. Then they decide to stop at a local brothel called the “House of Blue Lights” (the place George talked about earlier). They meet two sexy callgirls played by Karen Black (Five Easy Pieces) and Toni Basil (who later went on to sing the 80s pop hit “Mickey”). The boys get to know the gals as they travel around outside at the great Mardi Gras festival (there’s some cool footage of the big party in this sequence). The next morning Cap takes out the LSD tabs the hitchhiker gave him before they left the hippie commune. Cap gives out all the LSD to Billy and the two girls. This part of the film is a really brilliant sequence portraying the “trips” they all have although it’s not a very good one, since they are in a cemetary seeing all kinds of weird, disturbing images. 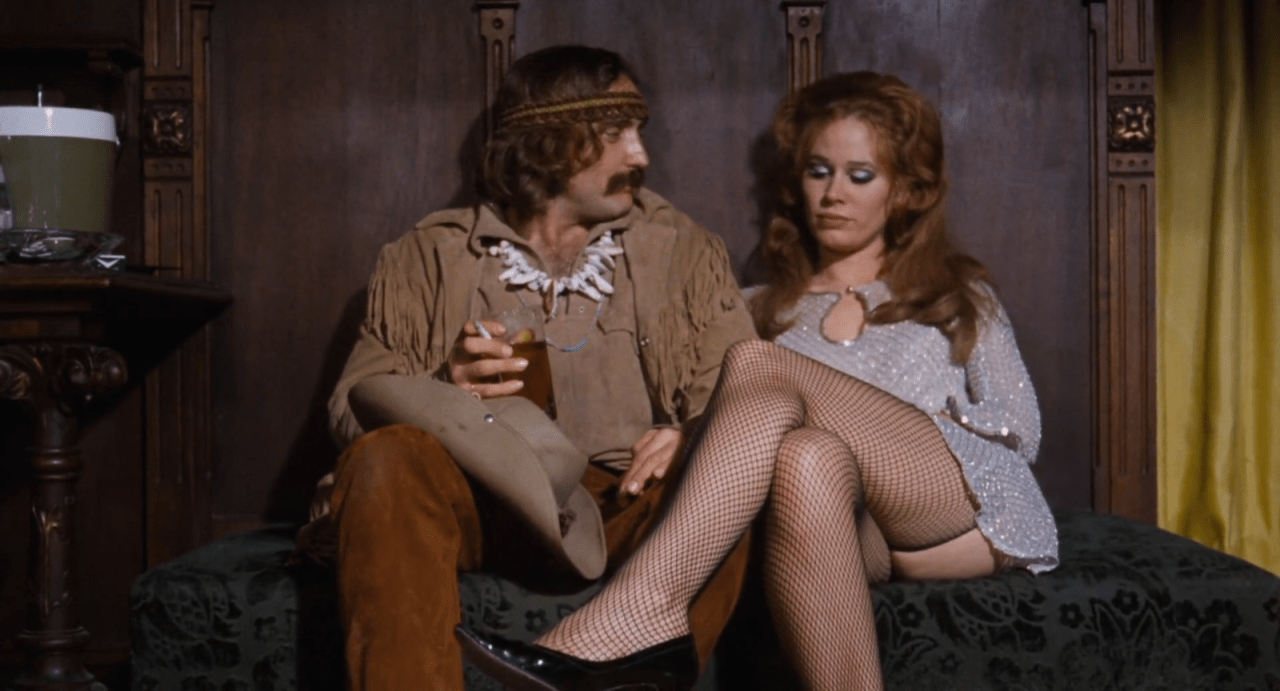 After leaving Mardi Gras, one of the most important moments in the film comes when Cap declares that he and Billy “blew it”. Billy doesn’t understand Caps comment, he sees their new status as successful and truly free. Yet, Cap doesn’t seem too optimistic about their new found “wealth”. Something he went looking for on this journey was never found. 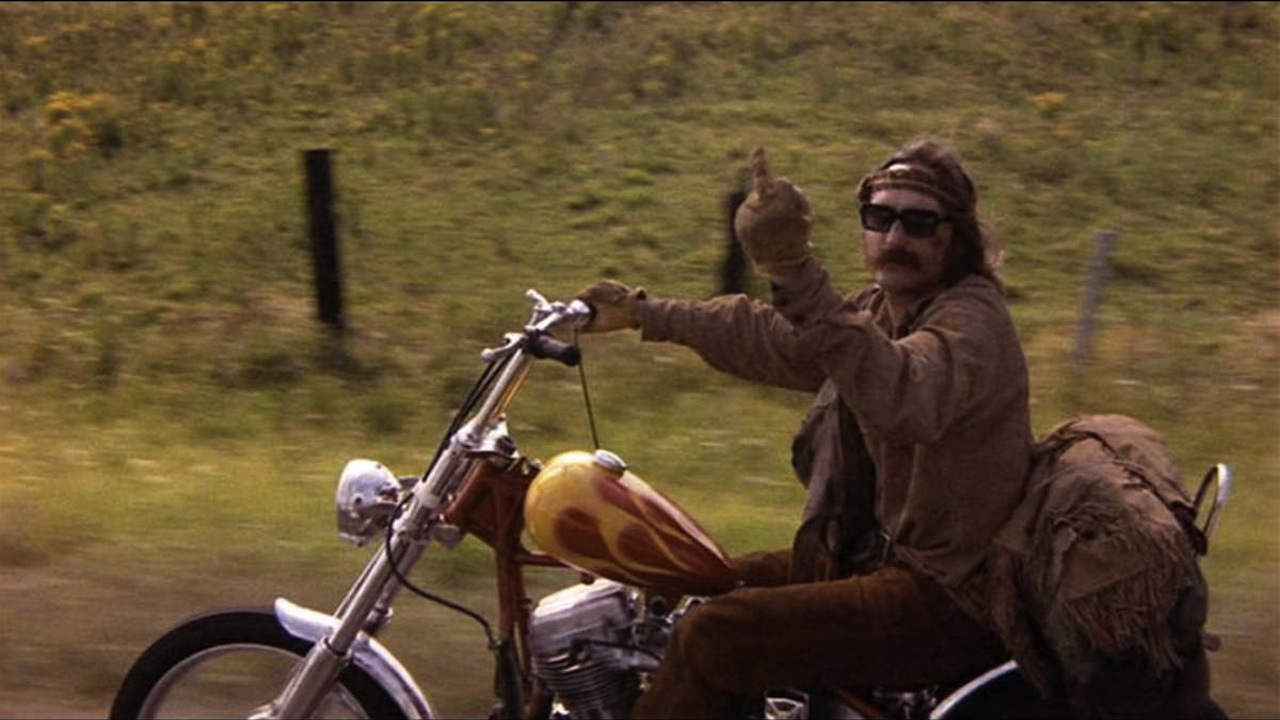 Easy Rider was a big hit when it was released and even though it is now dated as far as the 60s atmosphere, music and hippie lingo etc, at the same time the way it was filmed and it’s adventure theme make it timeless. In 2011, our world has become so obsessed with speed and technology, and that’s why Easy Rider is always such a great movie to revisit when you want to just take time out from your busy life and relax. 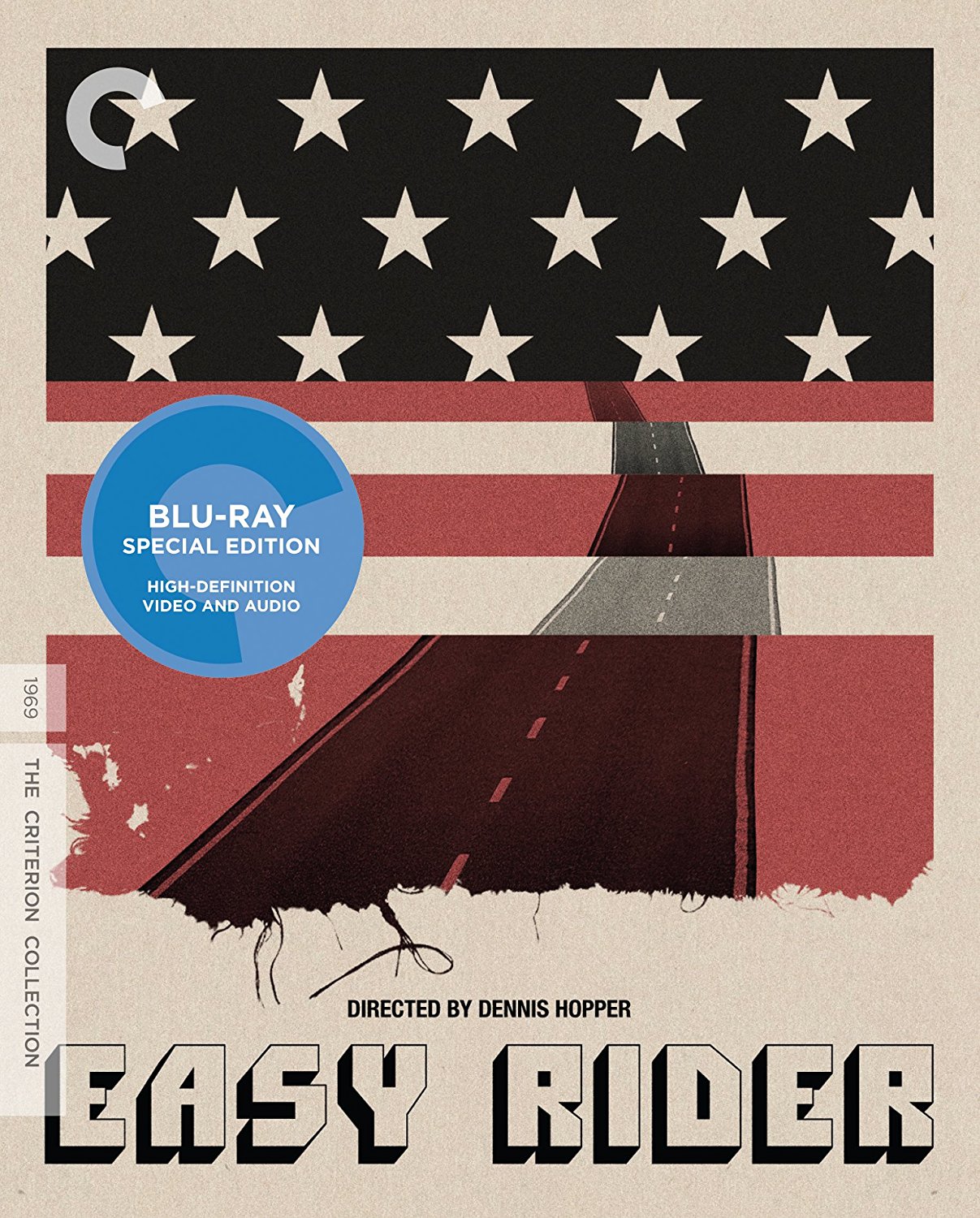